If I worried about what every bitch in New York was saying about me, I'd never leave the house.

Yo yo! Hello pups, happy Easter! After an exhausting, if short, week at work, I have a lovely long weekend stretching out ahead of me. Sleeping, sewing, knitting and eating chocolate beckons, as does a trip to the cinema on Monday to see the new Fast and Furious film. Seven times the fastness, seven times the furiousness. What's not to like?!

As I said, work was pretty exhausting this week and I've been feeling a bit stressed. UPS put me through the wringer a bit as well this week by managing to lose the parcel containing my replacement Macbook. Man, their customer service is BAD. Really bad. After five phone calls to them to see where my parcel was, in which I was told that it was (variously) in the local drop-off point, with the driver, in my flat, in Tamworth and also in an 'unknown location' it eventually turned up. Hurrah!

So anyway, that's the craic there. I have some bad films to watch this afternoon, including one with Gene Hackman AND Dennis Franz, so that's good. Before I do though, do you want to see another hand-knitted cardigan? And a dress that I made last year but never blogged because I hated my face in all of the photos of it? OH, GO ON THEN.

I knitted another Agatha cardigan! I know that one of these days I should branch out into knitting something from a designer that is not Andi Satterlund. However, there are still a few of her designs that I'm keen to make so, not sorry. There will be more Andi Satterlund designs here in the near future. I'm knitting a purple Hetty cardigan and have an orange Myrna planned too. I thought it would be good to knit another Agatha cardigan while all the things I learned from the first one were still fresh in my mind. So one day a few weeks ago, Nic and I walked up to Wool Warehouse and I bought a few skeins of Cascade 220 in 'Goldenrod', some buttons and a pair of Knitpro circular needles. And then, boom! I knitted another cardigan! 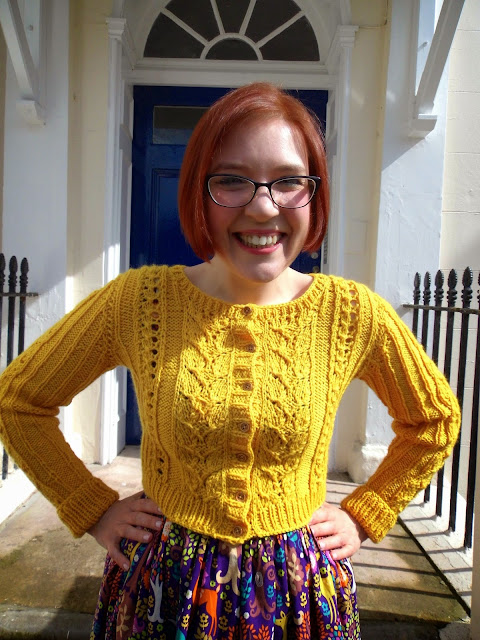 Andi Satterlund 'Agatha' cardigan. I haven't thought of a name for it, though!

I'm so ridiculously happy with this cardigan, I can't even tell you. I mean, there are a few mistakes in it and I think I made the sleeves a bit too long. Also, maybe it's not the most flattering - the weight of the yarn means it's pretty bulky and I think it makes me look a bit like a yellow chubby chubster. BUT it's bright yellow and it's warm and cute and I'm still really jazzed that I can knit my own cardigans. FUCK YEAH KNITTING. 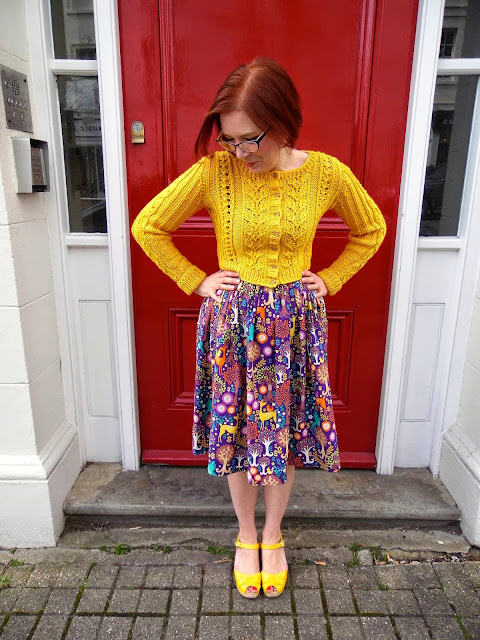 After wearing my blue one a fair bit, I realised that I had made a mistake in knitting the body and had made it too short. So I knitted this one to the right length and it made all the difference. It still rides up a bit in the back but it hits my waist at the spot that I like. I'm super proud of it and I don't even care. 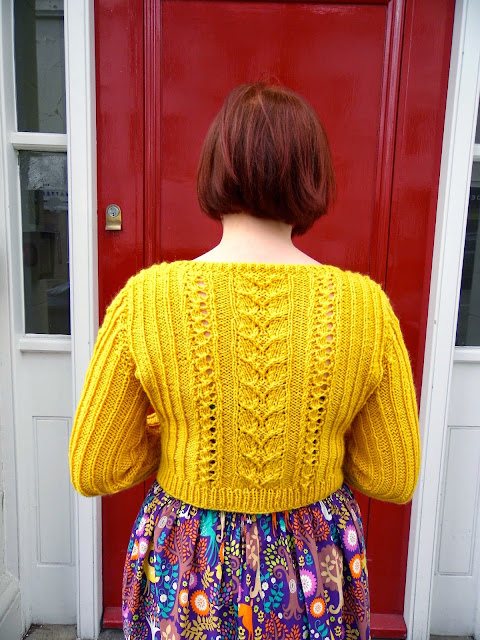 Here's my bread back. But the cardigan fits well there too.

I added yellow grosgrain ribbon to the button band, but this time around I didn't add it to the buttonhole side. Basically I couldn't face putting it through my sewing machine for buttonholes. So, when the cardigan is buttoned up the button bands are a wee bit on the wavy side but, do you know what? Fuck it. AH LOVE MAH CARDIGAN. GIMMEH CANDEH. 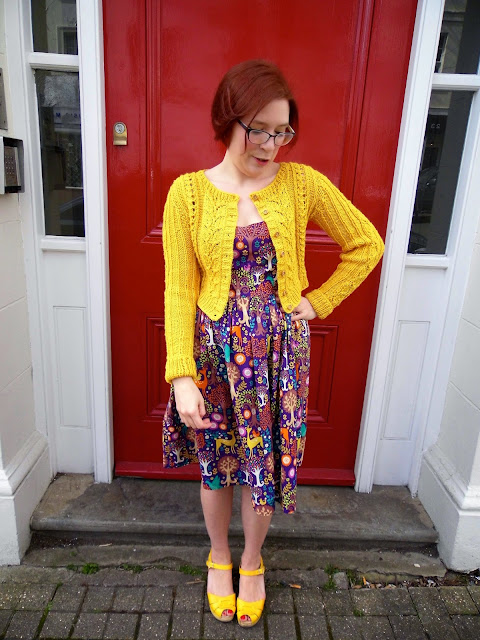 This might actually be my favourite ever photo of me. Every day is for derps, Heather B!

Sadly, I don't feel anywhere near as thrilled with the dress. This is a By Hand London Kim dress that I made in November, and which was destined for the charity shop. It was in a charity shop bag until Nic vetoed it - he's not bossy usually but he hates me giving away any of my dresses - but, I've got to be honest. I might have to sneak it to the charity shop when his back is turned because it's just not working for me. 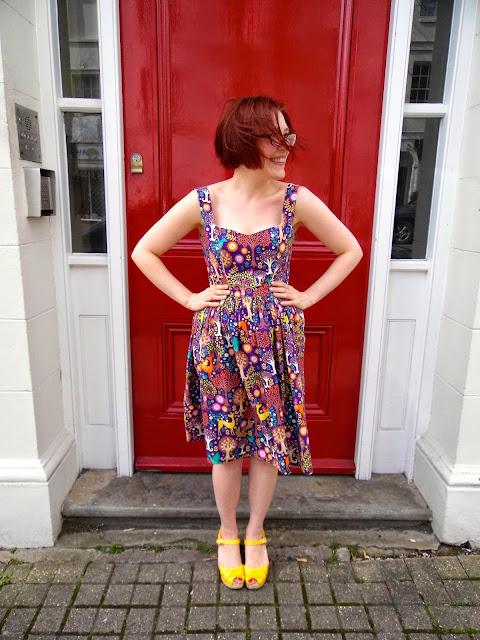 The dress did fit when I made it, but it's too big for me now. I really like the Kim dress - I'm planning to make one this weekend, in fact - but I need to make a few alterations to the pattern. I need to shorten both the bodice and the straps. I could go back and alter this dress, I guess, but I probably won't. Alterations are the worst. It's a shame, too because look how cute the fabric is: 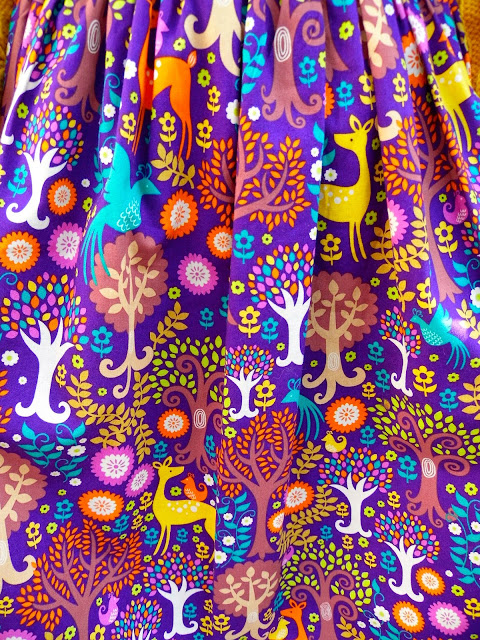 Maybe I will alter it. I guess Nic was right. YOU WIN, PILLAI.

So anyway, that's all the craic with me. I have a highly intellectual film to watch and some chocolate to eat so I'm going to toddle on here. A very happy Easter to everyone. Mind yourselves! 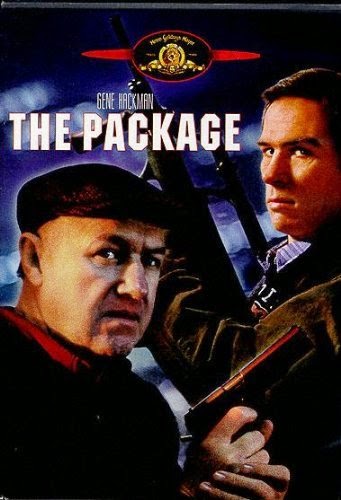