Often, the good suffer and the wicked prosper, and one hardly knows which of those is the more annoying.

Morning, boys and girls! Well, okay, afternoon. But hello anyway. Right now the spring sunshine is competing with the spring wind outside, someone nearby is happily grinding away (I think it might be the neighbour that we less-than-affectionately call Part Time Grinder but it's hard to tell. As soon as the sun comes out, grinding starts) and I'm lying on the sofa under lots of blankets, scowling a bit because I woke up this morning with a cold. Boo! I was going to spend today sewing but instead I'm going to drink tea, knit and watch Law & Order S4 or The X-Files S6, depending on which one of those boxed sets Nic is able to find in town. I've had kind of a stressful week, so this feels like an irritatingly fitting end to that. Ah well, onwards and upwards. Nic is also bringing cake back from town, so that's sure to make me feel a bit better as well.

I had planned to do a bit of sewing today, but that can wait. As it is, I have a backlog of finished projects to photograph and blog about! Here's one of them: the first dress I made in 2015, finally blogged four months later. EFFICIENT.

Immediately after I finished making the Montague Terrace dress, I cut out another McCall's 6696 dress, on which I shortened the bodice by an inch and a half. I finished it, and it was too cold to wear it, and I wasn't sure if I had made the right adjustment (I went on to make another one - the Joy Parade dress - with only the bodice back shortened) so I decided to pack it away until spring and then decide what I thought of it. As the sun made an appearance last week, I unpacked more of my spring clothes and tried this dress on again and, as often happens, I went from feeling a bit disappointed with it to really liking it. Fickle girl! 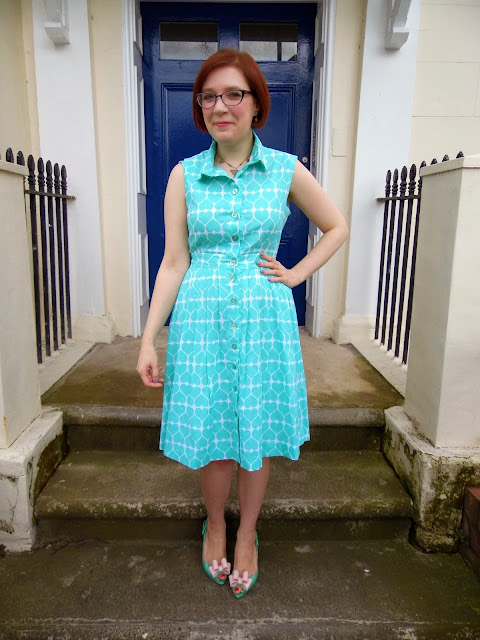 I'm pulling a stupid face in this photo - I am in all of the photos of this dress - but, ah well! So, I think that part of the reason why I wasn't sure about this dress at the time is that it was cold and dark when I tried it on. Also, I had a few extra pounds of Christmas chub, which made the fit of the dress less pleasing. Now I've shed that winter coat, I think it fits better and I like it a lot more.

I bought the fabric when we were on honeymoon in Paris. It was a 3m coupon and I bought it in Les Coupons de Saint Pierre - I think it was something ridiculous like 10€ for 3 metres. It doesn't have any manufacturer information on the selvedge but an instagram conversation with Christine Haynes made me realise that it's probably a copy of a print by Umbrella Prints. This isn't one of their prints - Umbrella Prints tell me that they never released this design in this colour - and although it's lovely, I wouldn't have bought it if I had known. Anyway, the deed is done now and the whole thing alerted me to the existence of Umbrella Prints, so that's the craic there. 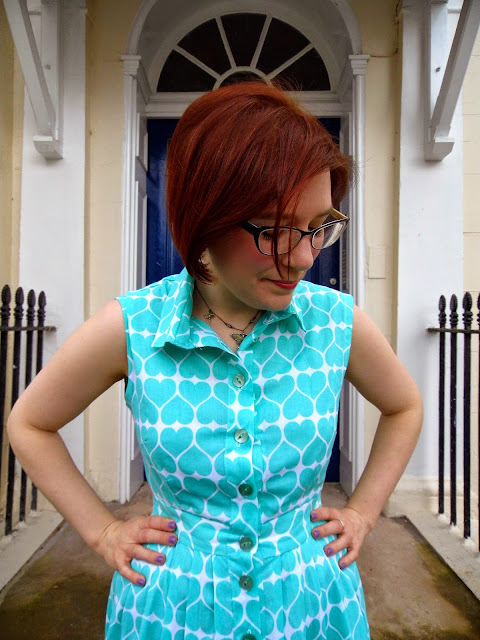 Looking at it now, and being able to make a comparison across the three dresses I have made from this pattern, I think that shortening the front and the back of the bodice is possibly the way to go with this dress. It's maybe hard to make a definitive judgement though as obviously this dress is sleeveless. Also, the fit is clearly still not 100%. But anyway, I'm going to wear this a bit more and think about it before making another one. I will go back and move the bodice buttons slightly though - moving them a little bit off-centre will stop some of the pulling that you can see across my bust.

Those are very minor niggles though - I really like this dress and it's a lovely, light and breezy spring shirt-dress. I wore this on Easter Day for a stroll around town with Nic and I even heard one girl in the park whisper to her friend that she liked my dress. Compliments for the win! 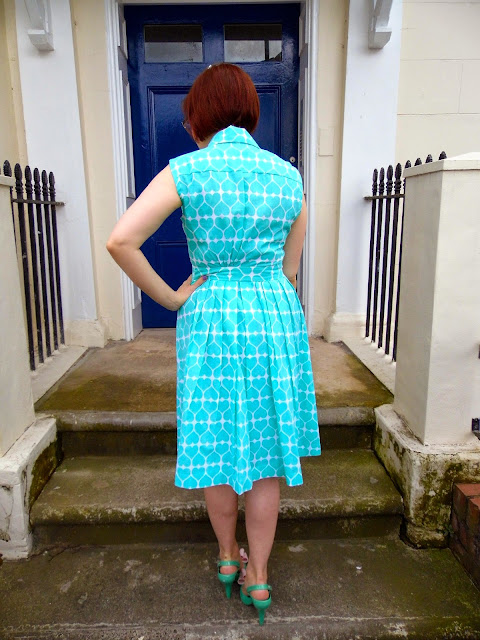 Here's the back! No, I don't know why I'm leaning in that awkward, stupid way. I was hungry and thinking about my lunch so maybe that's why.

I am already looking forward to finding some time to make a fourth one of these dresses, and possibly a fifth! I have an idea of making one in wax cotton and, to that end, I bought some more of the fabric that I used to make my Bedelia dress (which is sadly becoming too big) and it might be the right candidate for the job. I'm also considering making some out of the Liberty Queue for the Zoo fabric that's been sitting in my stash since January, waiting for its assignment. So, we'll see. At the moment I have more plans than I have time or energy, but summer is usually a little bit quieter at work, so I hope that I can make some of these plans a reality! 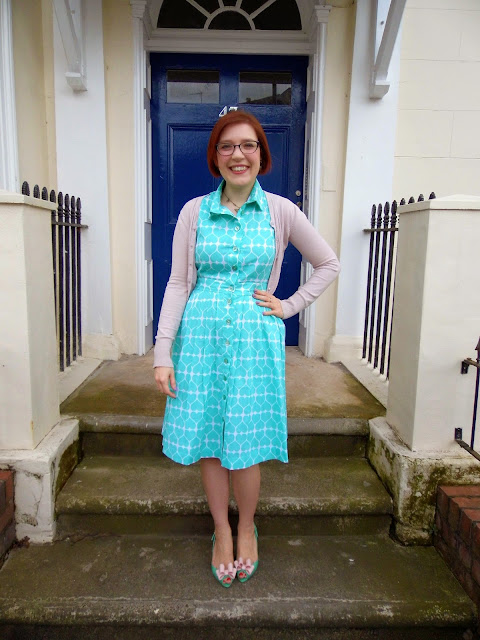 Cardigan girl! I wore this dress with my pale pink Hell Bunny cardigan - and then I got Easter chocolate on the sleeve, like a dick.

Actually, right now what I really want to be sewing is something very retro-themed. Yesterday, Nic and I met up with a friend who gave us the first two issues of a comic called Lady Killer. Nic already had issues 3 and 4, but once we had the start of the story I had to read them all, because: 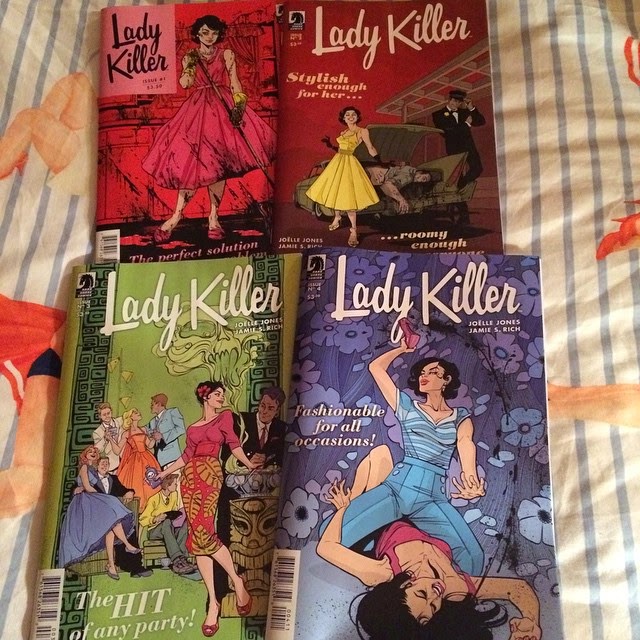 The outfit Josie is wearing on the cover of the bottom-right issue (issue 4) is pretty atypical of the rest of her clothes in this comic. She's an assassin, and she does most of her jobs in great big fluffy petticoats and circle skirts. So, it's made me want to put on a great big fluffy petticoat and a circle skirt dress, and maybe try to recreate this look. But not in a solid colour because I'm not an assassin. Honest. 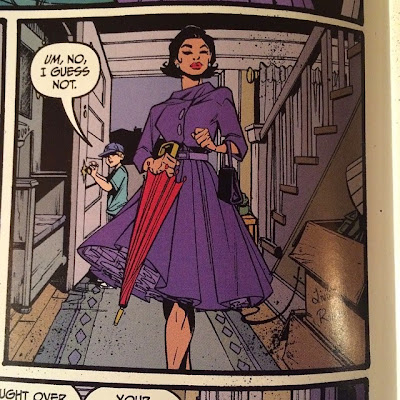 I actually made a dress with a circle skirt a couple of weeks ago and it's waiting to be blogged, so maybe I'll try to style it up like Josie here with a cropped jacket and an umbrella. Nic is thrilled that I have found a comic that I like so much. It's not just because of the clothes, either. The story is pretty terrific. Being that it's about a badass female assassin in beautiful clothes, it's hitting a lot of my areas of interest! Maybe it's because I've been sick and stressed this week, but Lady Killer cheered me right up, as did going back to the first season of Luther. BECAUSE ALICE MORGAN.

Anyway, that's the craic there. I'm going to leave you with one more (totally unnecessary) photo of my dress and say goodbye. Nic has just come back from town with lemon cake and S1 of Law & Order UK (a compromise, as the shop didn't have either of the boxed sets I wanted) so I have a busy afternoon ahead of me. Laterz. 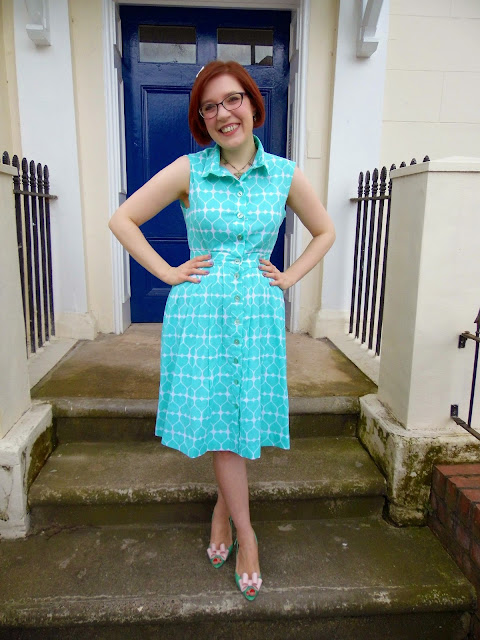 I'm goofy. But I like my dress. Since unpacking it last week I've bought some mint-green clogs that will look lovely with it too. Getting new shoes was one of the better moments of this past week.
Posted by Roisin Muldoon