Charlie, tell the president he will eat his salad, and if he doesn't like it, he knows where he can put his salad.

Hello! What's the craic, boys and girls? I'm grand - I'm just back from a few days working in London, which were pretty good days, all in all. Although, man, TIRING. I was staying in Bloomsbury, and walked everywhere, and I have the legs walked off myself. Nic joined me so that he could get in some research time at the British Library, and we managed to replenish our energy with pizza from Homeslice and pastries from Maison Bertaux. I'm a country mouse through and through so, all things considered, I was glad to get on the train back to Leamington this afternoon.

So that's the craic with me. Thank you to everyone who took the time to comment and get in touch about my last post. Since then, I have been feeling a lot less stressed about work, which is a good thing! It helps that I only have a few days before I have a whole week off, but in general I am feeling much more in control of my work-life balance. I could have ended up working over the weekend on a project that isn't going well (to put it mildly) but, instead, I recognised that I had done everything that was within my power to do and I put my work laptop away. Nic was out during the day on Saturday, and I spent the morning cleaning and the afternoon sewing. It was a sunny afternoon, I put Silk on autoplay on my laptop (that show is such, such balls, but I love a bit of Rupert Henry-Penry) and I got cracking on a sewing project that has been bubbling away in my brain for a few months.

Mostly, I think pinterest is kind of pointless, but a few months ago someone I follow pinned this dress  from Lena Hoschek's 'Hot Mama Africa' collection: 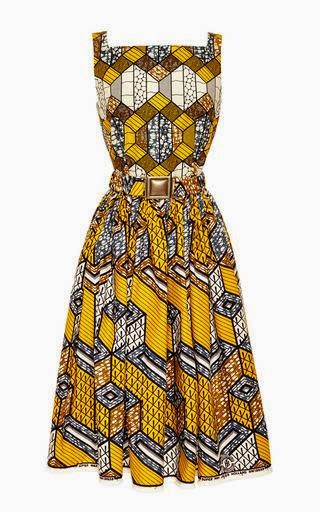 It's gorgeous, isn't it? It has a beautiful v-shaped back and a midi skirt. Lush. It's way, way beyond what I would be willing to pay for a dress but then, that's the beauty of being able to sew. I pinned this image to my sewing inspiration board and then I kind of forgot about it until I saw it on Liebling Vintage's instagram, and it went right to the top of my list.

The fabric is one of the things that makes this dress so beautiful and, unfortunately, I didn't have that fabric. But I did have some lovely lengths of wax cotton sitting in my stash, because I find it very difficult to resist when I come across it. Now I really want some in this gorgeous shade of yellow, and I will be hunting for it, but I did have this unusual brown and orange print... 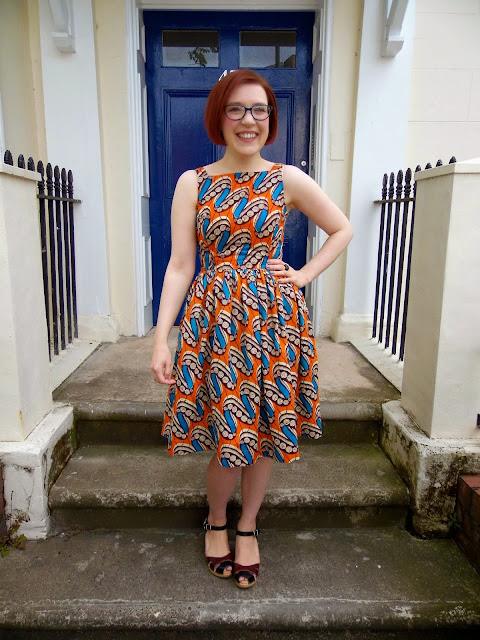 So, given the shape of the neckline of my inspiration dress, the bodice of the Flora dress was an obvious contender for this dress. I also liked it for this print, as the high neckline would allow me to show off maximum print. It wasn't very difficult to alter the back of the pattern to give this dress a v-shaped back - I just retraced it, drawing a diagonal line down from 5/8 away from where the straps go to the height where I wanted the zip to start. It was very easy, but I stabilised that diagonal edge with some cotton seam tape. 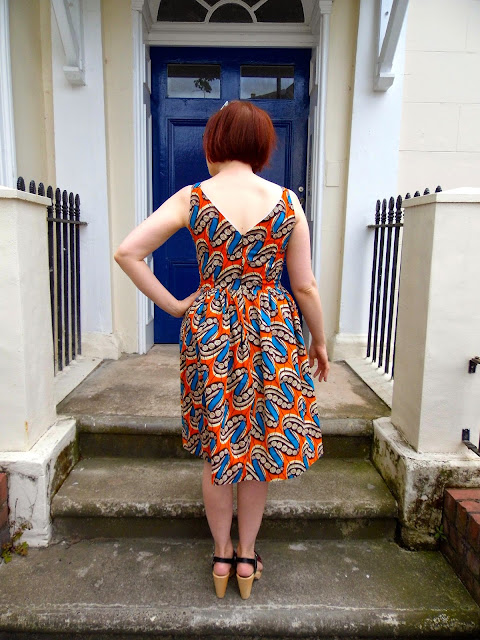 The v on the back of my dress comes down lower than the one on the inspiration dress and I like it, but I don't love it - I think I will experiment with this shape a bit further to get it just how I like it. But this will definitely do for now!

I bought the fabric in January or February from Shepherd's Bush Market. I bought two lengths from one seller and the other one was completely un-usable because it was so badly off-grain, so I was a little bit worried that this would be the same. Thankfully it wasn't - it was slightly off-grain, but as it was only £10 for 5 metres, I think that's fair enough! At the time I bought it kind of because the salesman talked me into it, but now I am very glad that I did, because it's so vibrant and bold. 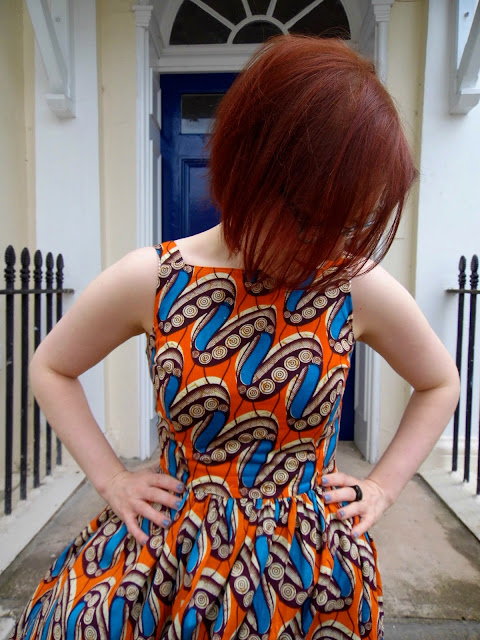 Here's a close-up of the print. Actually, I think that the brown is more of a very dark purple, but that orange is very definitely orange. I'm having a bit of an orange thing this year - since January, I have bought an orange sofa, orange lamps, orange sandals (the lobster ones!) orange yarn, and an orange satchel. I blame Nic - he bought me an orange anglepoise lamp for Christmas. I do want to get some orange clogs now, because I am predictable.

The Lena Hoschek dress has a matching belt and, based on the close-up photos, it looks like it's one of those where it's a length of elastic in a fabric tube, with a metal clasp on the end. Like the kind that come with those puffer coats? Anyway, those belts give me the creeps... no, I don't know why, so obviously I didn't make one. I don't really do belts, especially not superfluous ones, but maybe this would benefit from a belt. What do you think?

I wore this on Sunday with my orange Myrna cardigan... 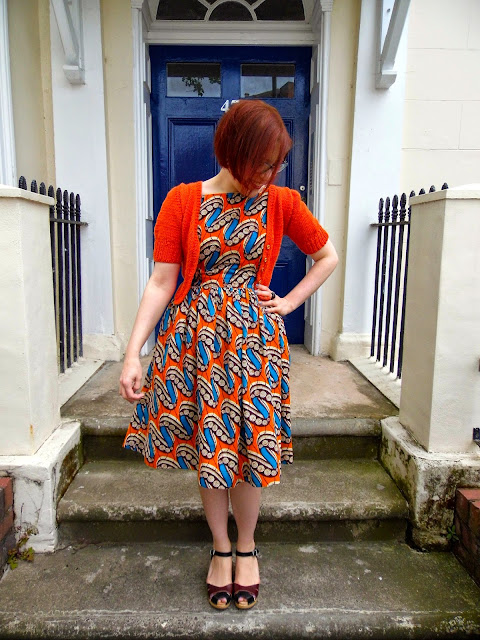 I'm still not totally convinced by the sleeves on this cardigan. Maybe I need to knit another orange cardigan with sleeves I like a bit better?!

So, all in all, I'm really happy with how my experiment turned out. I wore this dress for a very long day on Sunday and felt great in it. I'm tempted to make another one from some more of the wax cotton that's lurking in my stash. I'm also going to start lurking the Lena Hoschek shop for more sewing inspiration. I mean, I need to make something inspired by this, right? 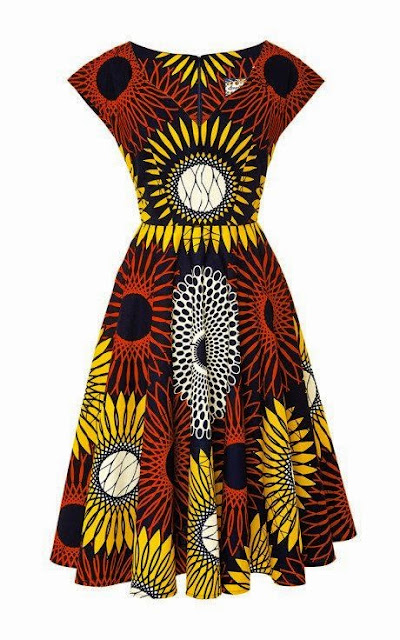 Anyway, I'm going to head off here. I have a potato to eat and a cardigan to finish. I told you I was a country mouse.
Posted by Roisin Muldoon