Malcolm McDowell is trapped in the future. He's being pursued by a cyberpunk from the past, played by Rutger Hauer. Erm, terrible idea. No one will watch that. I've not thought it through, Lynn. I'll call you back.

Hola pups! How's everyone doing? I've just had a lovely, fun-filled weekend with family and I have the rest of this week off to recover, thankfully. For their Christmas present this year, rather than try to buy something for my parents, Nic and I decided we'd treat them to a little mini-break by the seaside, and we all agreed that arranging it to coincide with our first wedding anniversary would be a good way to do it. They arrived on Thursday evening and on Friday morning we drove down to Folkestone so that we could all spend a few days by the seaside with Nic's family. It was a very busy few days and we managed to fit a lot in. We stopped for lunch and an explore around Windsor and Eton on the way down - we had chips next to the castle and Nic had his photo taken outside Frank Marker's office on Eton High Street. On Saturday we spent the morning with Nic's grandparents in Dover and the afternoon strolling around Folkestone and on Sunday we all got a little bit sunburned on Sandgate seafront. After wanting one for years, last week my dad bought himself a Canon 5D MkIII camera and, understandably enough, he wanted to really experiment with it. I was happy to oblige, as I had a new handmade item to photograph! Good old Daddy really got into the spirit of the shoot, bless him!

The item in question is another cardigan - this time, Andi Satterlund's Marion cardigan. I was keen to learn how to knit cables - mainly so that I would know how to do them, to be honest, and I had the Marion pattern in my stash as I won it as part of Andi and Lauren's Outfit Along last year. It's a lovely pattern, almost completely knit in stockinette, with some inset cabling at the neckline to add interest. I knitted this very quickly - I think it took under two weeks, all in all - but sadly, the finished item just doesn't work on me at all. 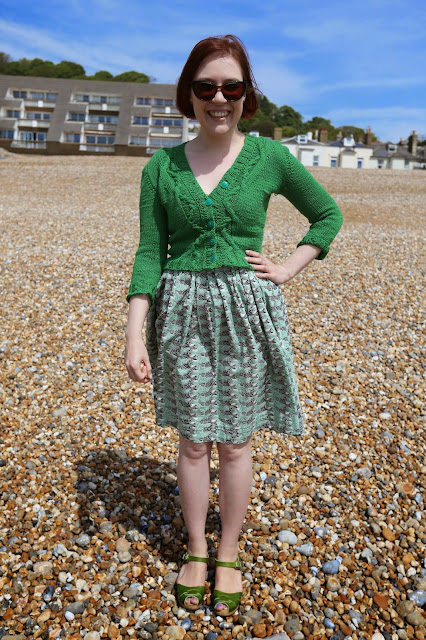 So you know the way some projects look better in real life than how they photograph? This cardigan is totally the opposite of that. It looks pretty cute in the photos - hell, I almost like it in this photo, but it's a mess in real life. This isn't due to the pattern, I should add. This is me. Here are the things I did wrong with this cardigan:

The other issue I have is a fitting issue, and one I have noticed on all of Andi Satterlund's patterns on me, which is that they are a little wide across the shoulders and the shoulder seam is at the top of my arm, rather than on my shoulder. This is especially pronounced on this cardigan and it's something I'm not sure how to fix. I bought a knitting book but I'd be really grateful if any of you knitters could point me in the direction of good resources for fitting in knitting? 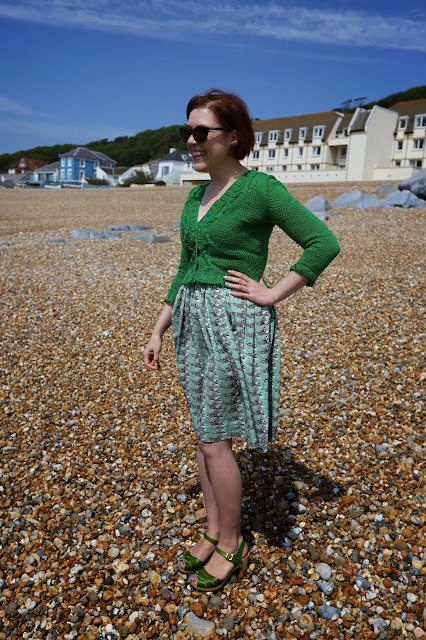 Side view! This is why I think I would like to knit a smaller size - or at least to grade down to a smaller size around the waist decreases - as I think the fit on this is a bit on the frumpy side. 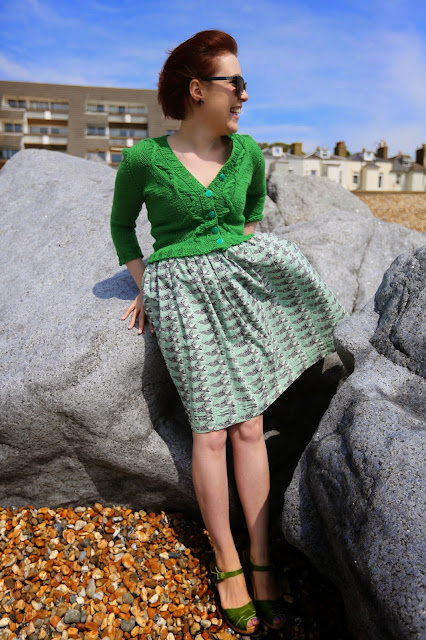 WINDSWEPT. Here's where Daddy decided he wanted to get a bit experimental with the photos! You can see more clearly in this photo the issue that I am describing with the fit across the shoulders. 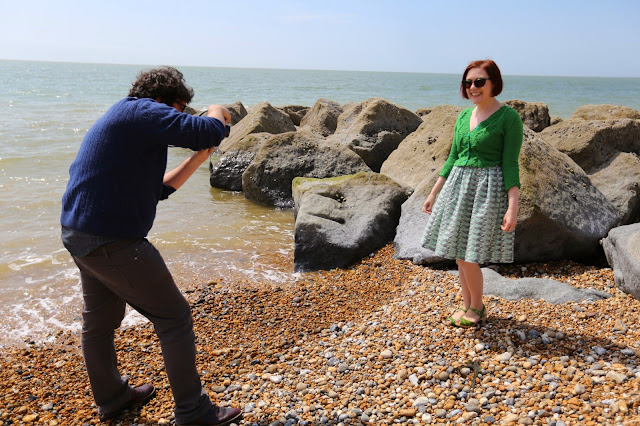 Initially, I had asked Nic to take some photos as I didn't want to bother Daddy, but I ended up with two photographers shooting me. It's a pity this was for a garment that I don't even like, but these photos do make me smile. We had a lot of fun and I know Daddy really enjoyed playing with his new camera. 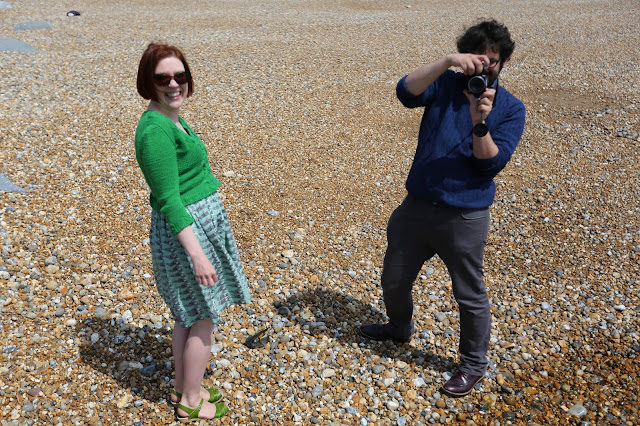 I would say this is the least flattering photo of me ever (except it isn't - there are worse photos*), but this is such a happy memory it doesn't matter! 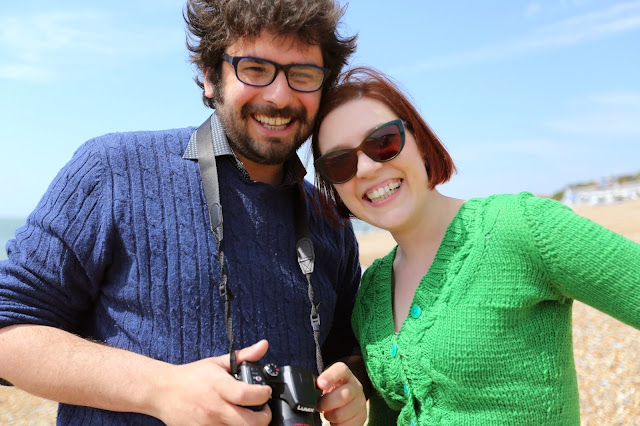 I love this photo. Also now I want a DSLR...

As for the cardigan... well, I have it on time out at the moment. I wore it for most of Sunday but I didn't feel good in it. Well, you know, I felt good because I was having such a lovely day, but I didn't enjoy wearing the cardigan. I'm trying to decide whether it's worth frogging it and re-knitting it with some modification or just chalking it up to lessons learned and moving on. I did enjoy knitting it though, and I am very happy to have learned how to do cables, so even if I do just relegate it to the island of unloved handmades for it to become the Mandy Hampton of knitwear, it was still worth knitting.

I've moved on for the moment and, in the car on the way down to Kent, I cast on my next knitting project - Andi Satterlund's newest pattern, the Vianne cardigan.  I'm going to take part in this year's Outfit Along and pair it with a dress I'm planning to make from some fabric I bought in Birmingham earlier this year. I've been making an effort to wear my hand knitted cardigans as part of my unofficial participation in Me Made May, and I've been enjoying it - even with the odd bum note like this cardigan, I'm certainly finding knitting a worthwhile pursuit.

We left Folkestone on Sunday afternoon a little bit tired and sunburned after our adventures on the beach, and drove back up to Leamington. We had planned to stop at High Wycombe on the way up but a diversion instead took us to West Wycombe, and we had the chance to climb the hill to the Dashwood Mausoleum.  The mausoleum is visible from the train on the journey between Leamington and London and it's a landmark I always look out for - I've been throughly curious to visit it ever since I first noticed it. We didn't have time to visit the Hellfire Caves, sadly, but the amazing views over the Chilterns more than made up for it. 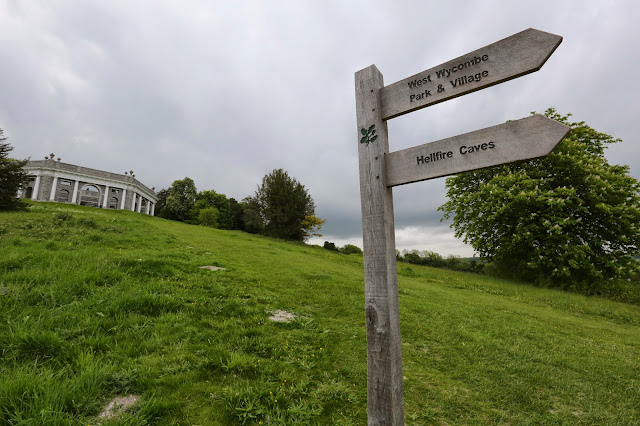 I love this photo... for some reason it reminds me of Clip Art, and that really makes me laugh!

My parents went home yesterday afternoon, but not before they took us to the shops to buy us a new television set. Nic and I have very little interest in having access to live TV, so we had been holding out on replacing our very old CRT TV. I didn't want the hassle! However, as a belated wedding present/first anniversary present, my parents wanted to upgrade our technology and bought us a lovely 32 inch smart TV. We still don't get live TV to it but we are able to watch DVDs and whatever we would have been watching online on it, so that's fancy. It makes the flat feel very posh! We've been celebrating by watching episodes of the original series of Star Trek - which I am thoroughly enjoying trash-talking my way through. Like seriously what the fuck is Bones's problem? What a miserable bastard. Lighten the fuck up, dude. YOU'RE IN SPACE.

Anyway I'm away here to watch that and crack on with a bit more knitting. Hurrah for holidays! 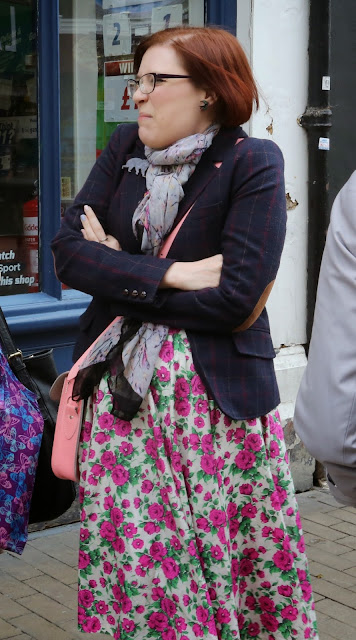 *So the photo above really isn't the least flattering photo ever taken of me. THIS one is. I've cropped everyone else out of the photo to preserve their dignity but I think that I was expressing sympathetic dismay over the sad state of Dover High Street. Whatever I was doing, this photo really made me laugh because I look so much like Lynn Benfield. 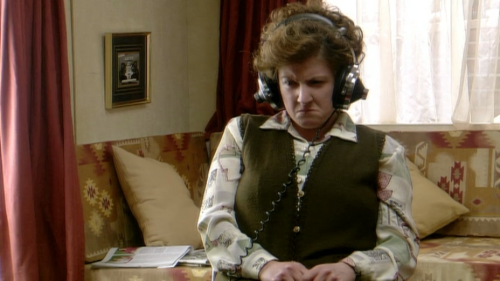 Here's me, watching Poirot on UK Gold. I'm dead to the world.
Posted by Roisin Muldoon