If you're going to the kitchen, could you get me two whiskey sours? One for each hand.

Hey guys! It's been nearly two weeks since I've been around - do you all still remember me? The last two weeks can only be described as chaotic. I've had some absolutely lovely days - last weekend was pretty perfect - and some super, SUPER shitty days as well. Work has been pretty horrible - after getting through something majorly bad happening a few weeks ago, something very similar happened again this week. This more recent one was simultaneously less bad and much worse, which I appreciate is difficult to explain. Anyway - for the moment, it seems to be sorted out, so that's something. I have been angry and discouraged, and pretty fucking stressed. It think that, in a weird way, I would have coped better if the issue was one that I had caused, rather than being one that I was subject to. At least then I would have the comfort of knowing that it wouldn't happen again. As it was, I got to Thursday like:

Anyway. I'm mostly feeling better now - I feel less stressed mentally, although my body hasn't quite caught up yet: I have ridiculous facial twitches (both eyes, one eyebrow and my forehead) and trembling hands. I need a holiday. Luckily, I have one coming up!

I did reach the end of the week feeling much more positive. This week was very difficult but I was able to get back to having a sense of perspective by the end of it. It's difficult not to take unfair and ill-informed criticism of your work personally. I love my job - I work hard at it and I'm good at it. I enjoy it. I'm lucky to have a job that revolves around thinking about things, being creative and solving problems - I even enjoy, somewhat perversely, all of the damn spreadsheets. So I celebrated regaining that feeling on the journey home from London on Friday night with some high-class train booze: 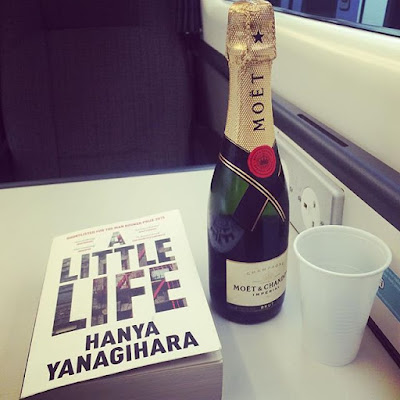 I've been sewing here and there - it's hard when your hands are shaking - but obviously I haven't been blogging it! I will have to try to catch up at some point. Here's a dress that I made a couple of weeks ago and wore to my friend Amy's birthday party last Sunday. It's another Butterick B5748 and longtime readers might find the fabric familiar... 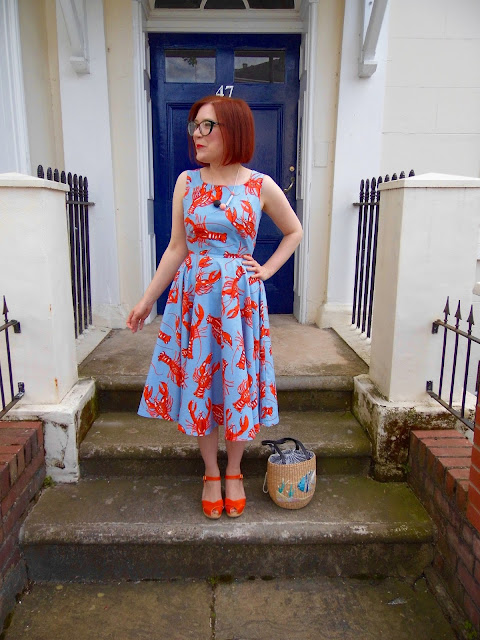 Yessss. Lobsters! It's not the same piece of fabric that my Lobsterlex dress was made from. Having refashioned that dress once, I didn't have it in me to do it again when it became too big. Kerry alerted me to the fact that Shivani was selling a length of it on her instagram destash account, so I jumped on it. How could I not? It was time to get lobsters back into my wardrobe!

I had three metres of this awesome fabric and it's 60 inches wide - more than enough for a midi-length circle skirt. Having been so pleased with the Burning Times dress, it seemed like the obvious choice. The fit of this dress turned out a little bit different, though. This is partly because of the fabric - this is a cotton spandex blend, so it has a little bit of stretch to it. Also, I lowered the waist darts slightly as I thought they came up a little bit high on the Burning Times dress. I should have left them where they were - you can see some wrinkling under the bust - but it's no biggie. 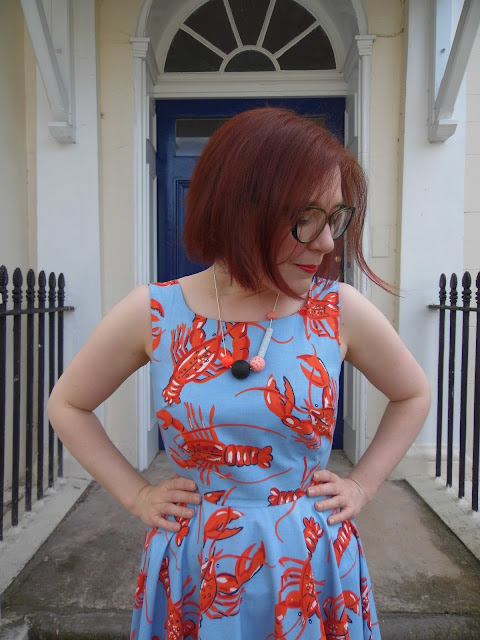 The skirt as drafted on this pattern is pretty long - it's a vintage re-issue - so I went with the longer length this time. Swishing around in a circle skirt is so much fun and it's even more so when it is covered in lobsters. Wearing it on Sunday made me bite the bullet and order myself a Tatty Devine lobster necklace, which arrived during the week with some other things I bought on ebay... 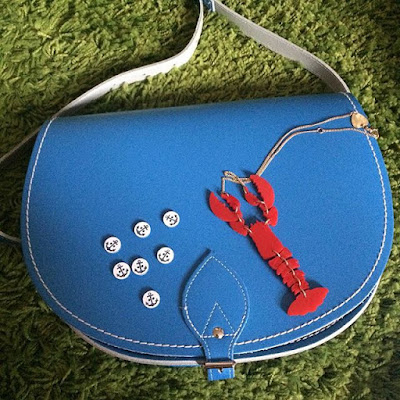 The cornflower blue Zatchels saddle bag was brand new and ridiculously cheap on ebay - it was under £12! The anchor buttons are for another McCall's 6696 shirt-dress in the red version of the polka dot cotton sateen that I made the Encore Tricolore dress from. I like a bit of repetition, as is evident from both this blog post and also everything else that has ever been on this blog. There's a good chance that the lobster necklace will be totally invisible on the dress, or that it'll be just TOO MUCH - especially if I wear it with my lobster sandals. But, if less is more... think of how much more more will be.

The lobsters go brilliantly with my new orange clogs of deep joy: 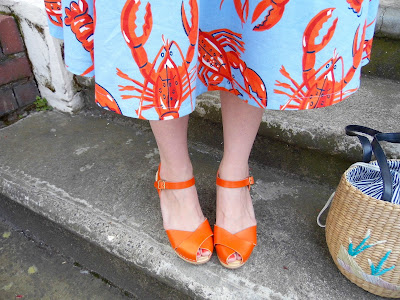 I think they also went pretty well with this crown, which I was briefly able to steal from the birthday girl... 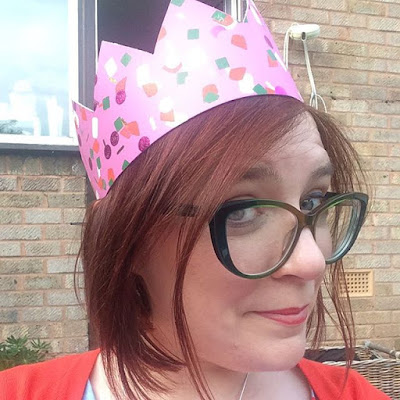 So, all in all, I think that a working lobster dress is going to fit very nicely into my wardrobe. 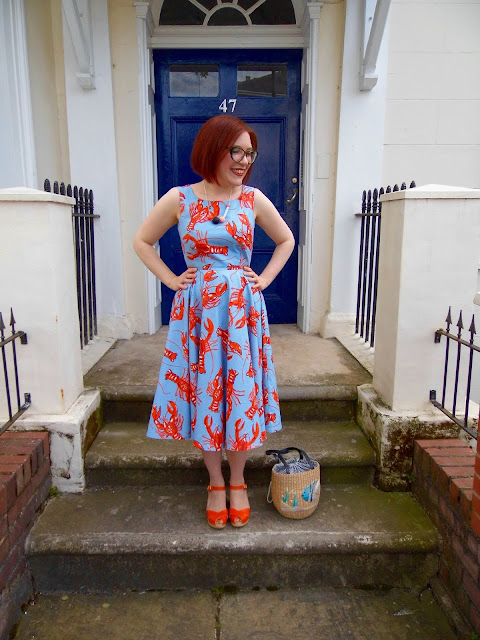 Well, I'm going to go now. We're up to the end of S9 of ER and Very Bad Things are happening for Kovac and Carter in the Congo, so that kind of needs my attention. Have a good week, everyone!
Posted by Roisin Muldoon