You are strong, you are a Kelly Clarkson song, you've got this!

I hope you're all grand. I'm feeling pretty grand: I have been (mostly) enjoying the warm, sunny weather - on the one hand I do not enjoy the hayfever and the fact that I swell up in the heat (sooooo attractive, right?) but on the other hand I am getting lots of wear out of my large collection of sandals.

I'm currently feeling pretty good because my summer of horrible work travel is almost over - I am done with trips to Slough and Milton Keynes for the forseeable future and apart from one day in Doncaster, the summer is looking blissfully free of budget hotels in places I don't want to be. It's the little things, really. It's good to find happiness in the little things because, fuck knows, there is more than enough misery in the world at the moment.

I've been spending lots of time enjoying the sunshine, reading, watching TV and films and sewing. Towards the end of last year, when life was extremely stressful and I was very bummed out by the endless winter, I made a promise to myself to make time to read every evening before going to sleep. This isn't a big committment - all throughout my life, I have loved to read, but I had fallen out of the habit of making time to read regularly. It's something that is probably familiar to lots of us - I was spending time in the evening scrolling through twitter, which left me too exhausted to read but too wound up to sleep. Putting my phone away and making myself pick up a book instead was an easy solution and it didn't take long to make it into a habit again.

Since January, I have read 30 books, all but one of which have been books I've read for the first time. A lot of it has been comfort reading in the sense that I know the characters from TV - I've read a fair few Ian Rankin Rebus books and I've been getting into Henning Mankell's Wallander in a big way, but I've also read some great non-fiction and a few books I've been meaning to read for a while. It has widened my tastes in reading and while I've only read one total dud (Naomi Alderman's The Power - I hated it and I can't really explain why) I have read a few books that I really loved, like The Light Years by Elizabeth Jane Howard. 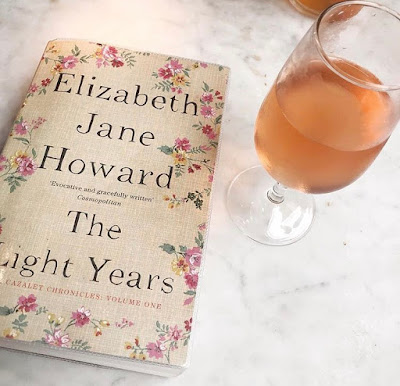 Nic and I spent one rainy afternoon in Paris reading and drinking in a neighbourhood bar in Batignolles and it was perfect.

The TV and film situation has been good too, although I have been making less of an effort to only watch new things. Earlier this year, on a whim, I bought S1 of LA Law on DVD - Nic and I finally got to the end of NYPD Blue and I wanted to watch something else starring Jimmy Smits that wasn't The West Wing (wonderful, but too depressing to watch it given the monster that is currently in the white house) or Sons of Anarchy (lol but no.) In addition, I figured that something co-created by Stephen Bochco and Terry Louise Fisher with a theme tune by Mike Post would be right up my street. AND I WAS RIGHT. I love it. 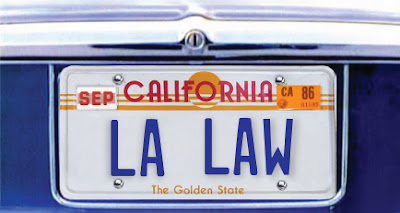 I mean, what's not to like? I love a good legal drama, the cast is fantastic and the title sequence is literally a solid minute and a half of people walking in and out of conference rooms while synthesisers and saxophones play. It is SO good.


It's also very encouraging to be watching and enjoying so much something that was first broadcast in the late 80s - the next time someone hectors me for not having watched something yet, I will remind them that the current hot TV shows will still be around in a few years time. But also that I have less than no interest in ever watching Breaking Bad. That's even more of a lol, no than Sons of Anarchy.

Anyway... SEWING, one of my other interests and the thing that probably brings you to this blog. Today I'm going to show you a dress I made in May, from fabric that I bought last year. The craic with this dress is that last autumn, I fell in love with one of the fabrics from Gertie's range for Spotlight stores in Australia - this fabric: 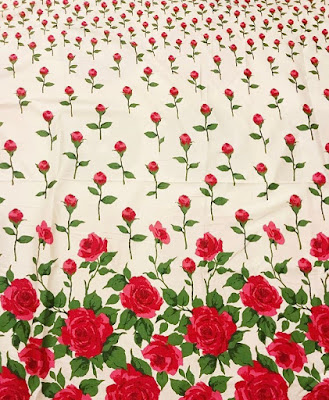 Now, I'm not in Australia and Spotlight don't ship internationally, but luckily for me there is a wonderful international community of sewing people who will help a sister out. The amazing Colette kindly agreed to get hold of some of the fabric and post it to me, which just left me with the dilemma of what to do with it. Thankfully, Gertie herself solved that problem by way of her collaboration with Butterick: 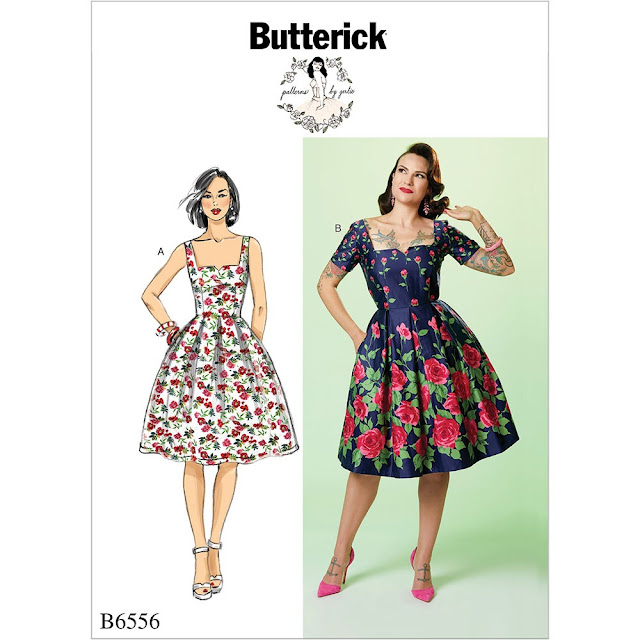 I love border prints but I find they can be a little bit tricky to work with - working perpendicular to the grain rather than parallel to it changes the fit, and with such lovely fabric I didn't want to risk ending up with a dress that was a pain to fit. B6556 is the perfect pattern to use with a border print like this one, though as, judging by the grainlines on the pattern pieces, it has been drafted to work well with border prints.

I started by making a bodice toile, which showed me that I needed to shorten the bodice by an inch. Then I made a wearable toile with wax cotton from my stash that has the print running parallel to the selvedge: 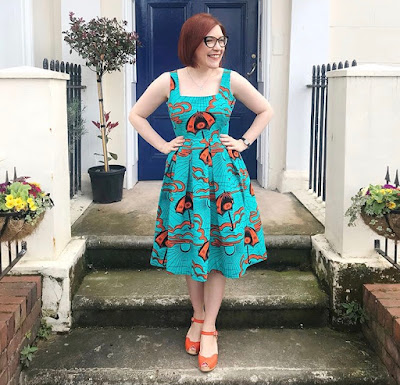 I didn't have enough of the fabric to use the skirt pieces from the pattern and I wasn't sure about the notched neckline so I straightened it. I don't love the finished article but I can't put my finger on why - I think it's just that I don't love the colours on me - so I have packed it away to reassess it at a later date. Because I had some reservations about the dress, I decided to make another one before cutting into my precious rose fabric, so I made another version with some fabric I got from Marie's destash: 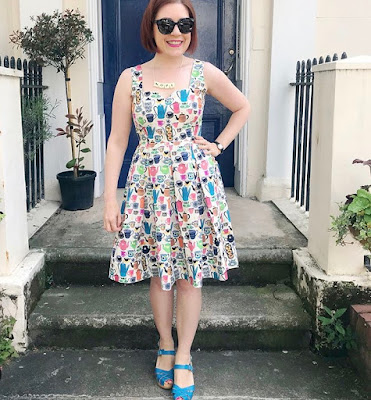 This time, I did sew the notched neckline and I had enough fabric to sew the skirt from the pattern and I LOVED the finished dress. Don't let the necklace fool you: this was love: 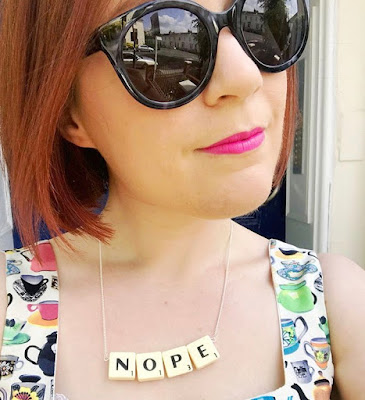 I was convinced, so I finally took the plunge and cut into my lovely rose fabric: 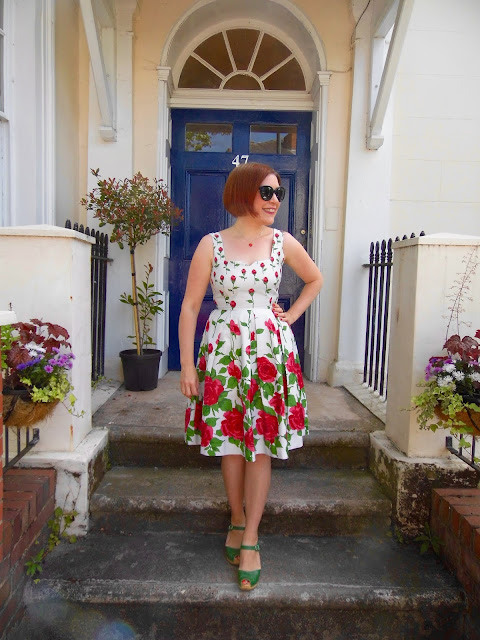 There isn't a huge amount to say about the construction of this dress - I can't really speak to the instructions as I just glanced at them, but it all came together pretty much as you might expect. As you can see, I didn't sew sleeves on my dress - the photo on the envelope gave me the impression that they would be quite restrictive as the armscye looks to come quite far down the arm - I might be totally wrong about it, but it looks like it might be difficult to fit. 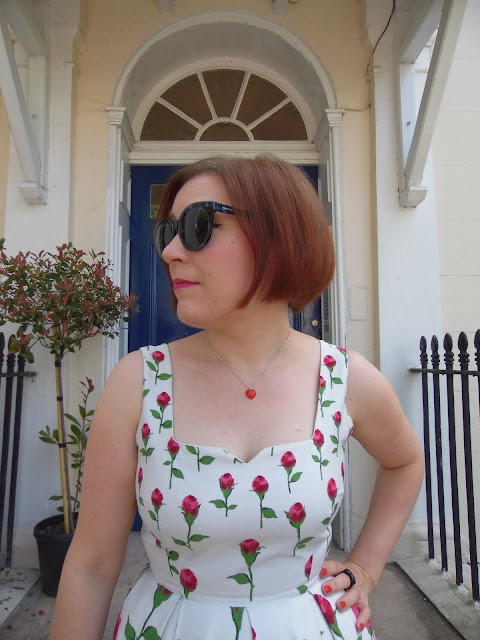 Look at that neckline!

But that note of caution aside, I do really like this pattern. I think the shape of the neckline is really sweet and I love the full, pleated skirt. The back neckline is also quite lovely: 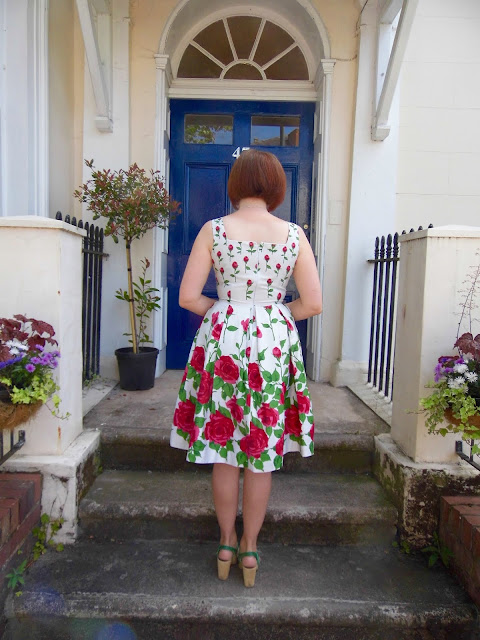 A rare sighting of my back! I used a concealed zip rather than the lapped one called for in the pattern, just because this is what I prefer.

I really love the finished dress and I feel super fancy when I wear it. It had its first outing in Paris for a day in Montmartre. I took it to visit the Rue Caulaincourt pizza man: 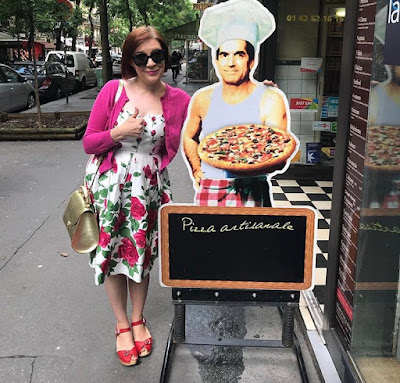 You know he's serious about making pizza because he is wearing a vest.

I wore it to drink champagne on a roof terrace: 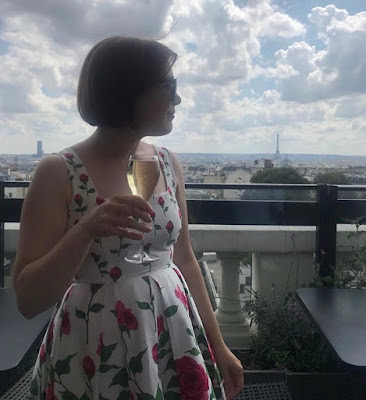 Me, the Tour Montparnasse, the Tour Eiffel and a glass of Laurent-Perrier

I wore it to drink rosé on a roof terrace: 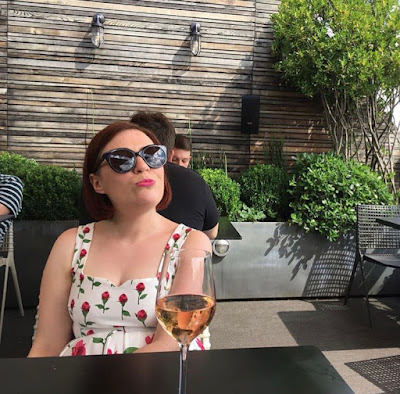 The dress and I had a lovely day.

It feels a bit dressy for everyday, which is partly because of the fabric, which is cotton sateen with a bit of a sheen to it and partly because the neckline is a bit lower than I am used to. But, for the times when I can't wear it to drink champagne in Paris, I might make like Carrie Bradshaw, for whom the dress is named, and tell people I'm wearing it because it's laundry day: 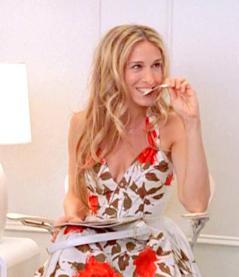 This was one of my other inspirations for this dress, although I hope that wearing it does not result in having to have sex with Jon Bon Jovi.

So that's the craic with this dress, which really does feel like an international sewing blogger effort what with the design coming from America and the fabric coming from Australia. I didn't really contribute anything to it, to be honest, but at least I treated the dress right and took it on holiday to Paris. I'm good that way.

Anyway now it's time for me to scoot on and maybe watch an episode of LA Law. I'd normally insert a gif here but the show is so old now that it's hard to find gifs of it so instead here's Jonathan from Queer Eye because he is an angel sent to bless us with his sweetness: