I didn’t go missing, David. The FBI knew where I was the entire time!

Well. It's a little embarrassing to roll up and publish a post on a blog that has been gathering dust for LITERALLY 18 MONTHS. The last time I sat down to write here was December 2019. I'm not going to apologise for the absence because... well, who cares? Also we all know that after 2019 came 2020 and... well. I admire the people who have carried on blogging in the last 18 months because honestly - I tried so many times to string a sentence together and I was simply unable to. But there we are.

Anyway, if you're here - HELLO! I hope you're as well as anyone can be in these truly strange and terrifying times. I'm... pretty good, considering. It has been a rocky old time, quite honestly, but that's true for all of us.

Since I last blogged in 2019 (!) obviously a lot has happened and life has changed quite considerably. When COVID started getting serious in March 2020, I started working from home full time and, like many people, spent most of the year essentially completely isolated from the world. Nic and I were both very lucky in the sense that neither of us got sick, we didn't lose anyone close to us and we were both able to work from home throughout. So we managed to miss out on many of the practical effects of the pandemic that upended people's lives. But of course that doesn't mean it was easy and, as I'm sure is true for many of us, the events of 2020 made me feel very differently about my life. I think about this postcard from PostSecret a lot: 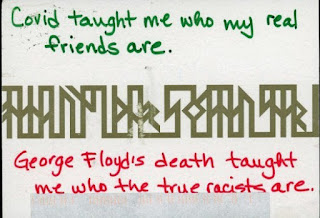 This sounds much more dramatic than my experience, but the dual ruptures of COVID and then the events of summer 2020 really made me reassess who I was spending my time with and some relationships changed forever.

Working through the pandemic was also a LOT. I was lucky to have continuous employment and to work for an employer that was well set up for home working. I didn't have to worry about being forced back into the office or about losing my job. But my job changed completely - the thing I worked on was suspended and, as a result, I was moved initially into working on something else within my usual team and then eventually I was redeployed into working in a policy role in the Department for Education. I absolutely HATED it. I was miserable. I was working with some really nice people but the work itself was horrible and the management was horrible and the whole atmosphere was just extremely toxic... extremely hierarchical to the extent that people in the grade above me literally wouldn't talk to anyone at the grades below them. It was horrible, and I hated the policy I was working on too.

It was very hard, and the experience of being forced to move into a job I hadn't chosen made me feel completely lost and totally undervalued by my 'home' organisation. That was partly irrational - most of my colleagues were also redeployed so it wasn't like I was picked on specifically - but it was also an important wake-up call for me. Long-term readers will know that work stress has made me sick in the past and it just became so obvious to me during redeployment that I had been held to an impossibly high standard at all times for something that was so inessential that it ended up being shelved, you know? The job that, at times, made me consider hurting myself was so inessential that I could just be picked up and moved to something totally random. It was a painful realisation, but an important one.

Nic was wrestling with similar feelings about his job and his employer. We were both struggling with being separated from our families and friends and, by December 2020, I just felt like there was nothing to look forward to. I had managed to stay relatively sane during 2020 by talking extremely long walks around Leamington listening to podcasts and by doing Yoga with Adriene but the thought of another year of the same thing was really difficult to cope with. So we decided to make a big change, and decided to move to Dublin.

And that's what we did! Nic managed to get a great job in Dublin that he felt really excited about. I was successful in an interview at an organisation I was excited about working at and I'm basically on a waiting list for a job there AND I got a short-term job at another really cool organisation that I am exciting to be working at. So we moved - in May we left Leamington for good and we have been living in Dublin since then. 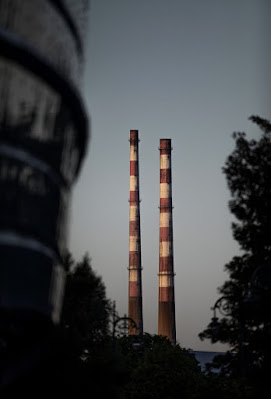 Poolbeg Stacks seen from Lansdowne Road - photo credit Eugene Muldoon
It was a big move, obviously - complicated by both COVID and Brexit - but, having decided in January we were going to do it, we had a bit of a lead time to get things organised. It was a little bit difficult to do some of the things you would normally do prior to a move - for example, it was extremely difficult to donate the furniture we couldn't bring with us to charity shops and getting a slot at the tip was like trying to get tickets for Glastonbury! Also the process of finding somewhere to live in another country was a bit of a challenge - but everything worked out and Nic found us a lovely house to rent in south Dublin. 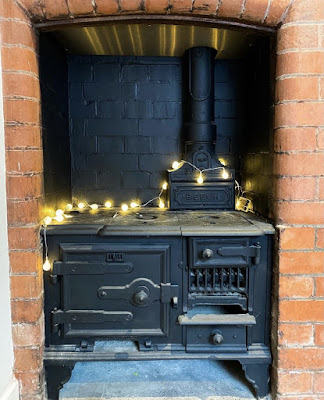 Níl aon tinteán mar do thinteán féin - a cute little corner of our living room. I don't know if the stove actually works but it looks really sweet.

There were things I thought would be harder. I thought it would be harder to leave our flat, where we had lived for 12 years - but in the end, saying goodbye to our home was a good feeling. It was a good flat and I loved living there, but it wasn't suitable any more for the life I wanted to live. It was hard to say goodbye to friends but, again, not as hard as I thought it would be. I think this is because the pandemic changed how we conducted friendships so the idea of staying in touch remotely is much more manageable. But also... I think I came to realise that things had started changing before the pandemic with people having children and moving away or changing jobs and shifting the rhythm of their lives... the life I had a few years ago wasn't coming back. And that's not a bad thing! But it definitely made it less difficult to say goodbye. And finally, saying goodbye to Leamington was fine. I loved living there. I did. But I left Leamington/Warwick/Coventry ONCE in 14 months and... by the time we left, I was ready to go. 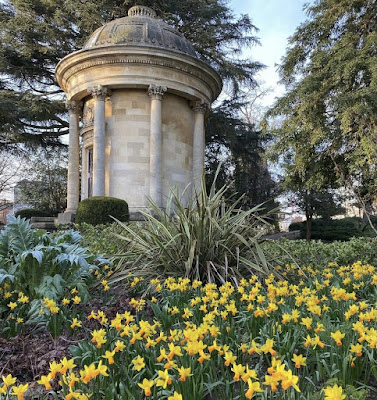 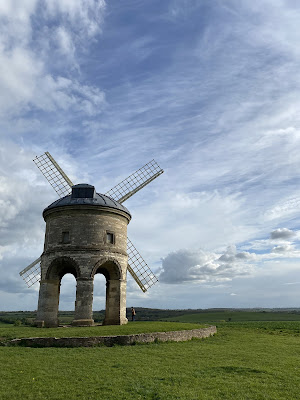 Chesterton Windmill on our last full day in Leamington

So... yes. We live in Ireland now! It is difficult to articulate how being back in Ireland feels to me. I lived in England for almost 20 years - which is a slightly terrifying statistic - and again, long-term readers will know how living there felt after the EU referendum. Honestly not being there is GREAT. But also, being here is lovely! We are close to my family, close to mountains, close to the sea and close to some excellent museums and galleries and cultural opportunities. Also, the potatoes here are just much better. 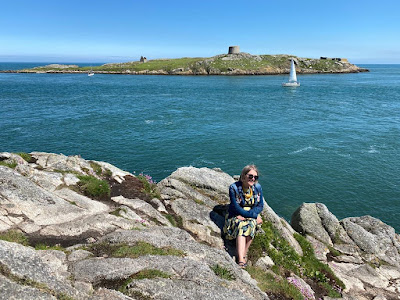 a potato in Dalkey

Now anyway if you're reading here still it might be because I used to blog about sewing and about what I wear and all the rest of it. I did sew a reasonable amount during 2020 but, in a shocking turn of events (shocking for me, anyway) most of the sewing I did was either to make myself various pairs of trousers/jeans/dungarees OR to sew for Nic. Making things for Nic was probably my favourite creative activity in 2020: 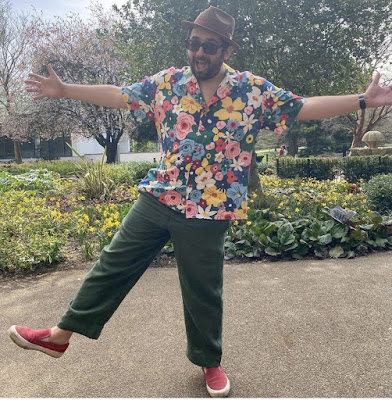 I made this whole outfit!

I made Nic various pairs of trousers, shirts and dungarees. It's been so cool to collaborate with him on choosing fabrics and taking the basic template of the pattern (just a simple elastic waist trouser pattern) to make colourful, comfortable garments. 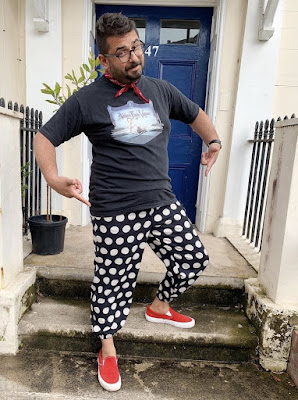 You can't see it in the photo but his t-shirt features Pubert Addams and it is awesome! I made the spotty trousers. 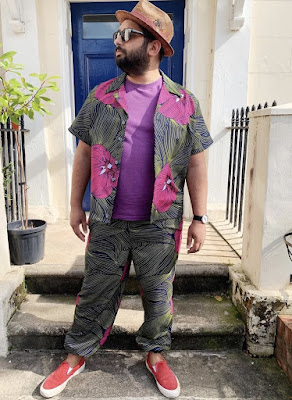 I love this set made from wax cotton

I haven't done any sewing for myself since we moved - for various reasons, it took a couple of weeks for us to completely unpack - but I do have a cute little sewing/working space in our new house so when the notion takes me, I'll be all ready to go: 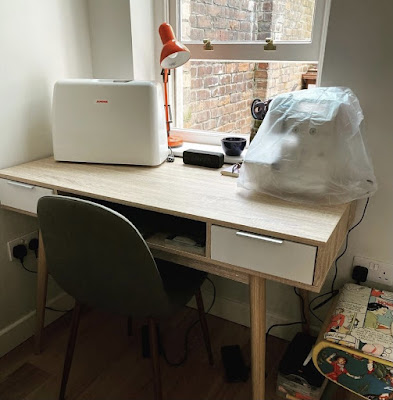 I'm sitting at this desk right now! I love having a view out onto our little patio/bin storage area 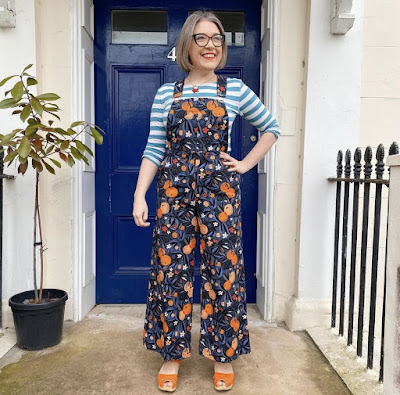 Citrus Balls Jenny overalls! I actually made two pairs of printed dungarees in quick succession - these and a pair made from Rifle Paper Company canvas and I love them both. They were brilliant during the extremely enduring winter and were an important part of the capsule wardrobe I had to live in when I had packed up all my clothes. 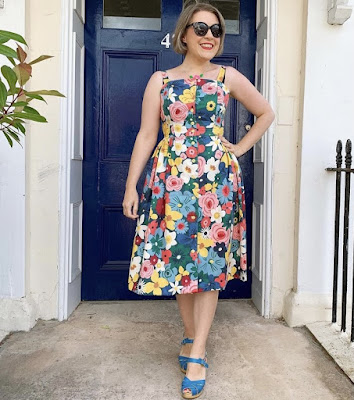 Fuck You, Johnnie Boden/Fuck The Tories dress: this is a McCall's pattern (sorry, I don't remember which one) and it was inspired by a Boden dress that I was unprepared to buy because Boden are big old Tory donors! The fabric is Nerida Hansen fabric and I bought it from Neko Neko fabrics - NOT from the small UK fabric shop that used my photo to advertise the fact they they were selling the same fabric, without asking me or tagging me! Fucking cheek!! 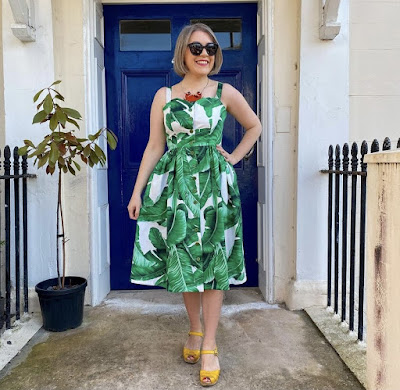 Dolce and Banana dress: this is that McCall's pattern again, this time in some excellent ex-designer cotton that I bought from Dibs at Selvedge and Bolts. I love this dress. I made it in February when there was some freakish warm weather and it's had a few wears since we've been in Dublin too. 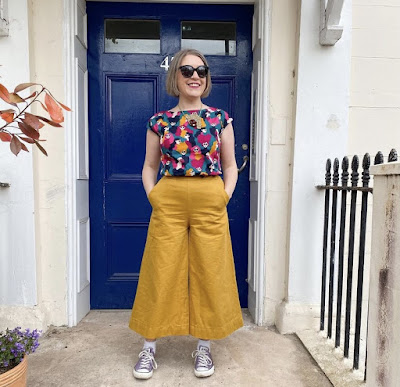 I've made a few pairs of these Megan Nielsen flint pants. These are made from quite a heavy mustard twill that I bought in Ray Stitch. It shows up every wrinkle and is quite stiff but I love the colour and I think these are very cool.

I don't know if I'll make a return to blogging - the mood struck me there and who knows if it will again. But, sure, it's nice to catch up anyway.