You know, we're living in a society! We're supposed to act in a civilised way!

Dia daoibh, a chairde! Conas atá sibh? Yes, I live in Ireland these so I'm going to be speaking Irish to you all now, lol. No, not really. But one of the things I have been enjoying the most about living in Ireland again is seeing the Irish language everywhere: something you might not know about me is that I speak Irish, having learned it at school, and although I am very rusty after a fair few years living in England, I am picking it back up by being surrounded by it once again and that is a lovely feeling. I am taking some Irish lessons online and am looking for some in-person lessons to start later in the year too, which is very exciting!

Anyway, since I last wrote I have been grand. Things have been good! Here's what's been happening:

I got fully vaccinated! We managed to just miss the window for vaccination for our age group when we moved from the UK - I literally got the text inviting me to register for a vaccination two days before we left the country - and I thought we would have to wait longer to get vaccinated here. But once the slot for our age group opened up it all moved very quickly and it was very straightforward. I got to go to the Aviva stadium on Lansdowne Road for the vaccination and the last time I had been there was in 1999 to see R.E.M. so it was all very emotional (although at that point, it was just the Lansdowne Road stadium so it was totally different to when I was there before.) I got a sweet badge and no real side-effects after either jab - some tiredness and a slightly sore arm for a couple of days. Because of the rise of Delta, I doubt that being vaccinated will change my day-to-day life a huge amount but it does feel good to feel so much safer when doing essential things, and to feel like travelling a little (within Ireland) and seeing loved ones is safer also. 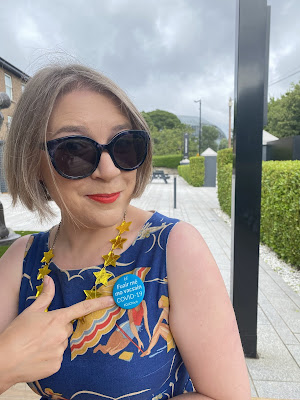 The badge says Fuair mé mo vacsaín COVID-19, which means 'I got my COVID-19 vaccine'

I was absolutely fucking DELIGHTED to get vaccinated and I felt very grateful that it is something that was available to me. But, as I discussed in my last post, one of the things about the experience fof living in the pandemic has been the differences it highlights between people. I've been really disappointed to see people in my life spreading anti-vaxx rhetoric and even worse when they have co-opted pro-choice wording to do it. For me it's one thing if you don't want to be vaccinated: that's a personal choice. I don't agree with it, but it is a choice. But I see no justification whatsoever in going out of your way to discourage other people from taking it, and from spreading blatant misinformation IN A PANDEMIC. Especially when it is coming from people who have children, or who work with children or with other vulnerable people who are unable to choose to be vaccinated. I've unfollowed and blocked a depressing number of people on social media because of it. Obviously people haven't acquitted themselves well in the pandemic in general but I do feel a lot like George Costanza just shouting WE LIVE IN A SOCIETY into the clouds. 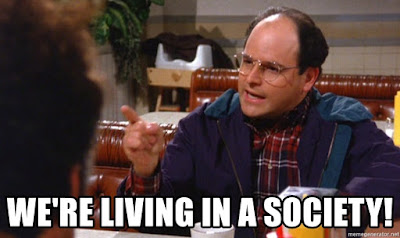 Anyway please do not comment with anti-vaxx stuff because I will delete it.

I've done some sewing in my new sewing space, which has been great! I made a pair of trousers that were pretty horrible, so there are no photos of them. The first successful thing I made was a Deer and Doe Bleuet dress, although I don't have photos of it yet! I refashioned a too-big Marimekko x Uniqlo dress. I also don't have a photo of that! But I do have photos of two of the other things I made. One was a Made by Rae Geranium dress that I made for my best friend's daughter: 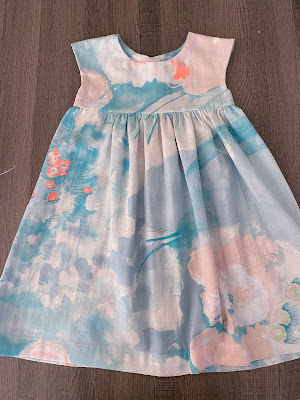 My best friend from school, E, came down from Belfast in July to visit us and brought her four-year-old daughter N with her. I hadn't seen E for about three years, so it was tremendously exciting to spend the day with her. It was extremely hot but we had a lot of fun just pottering around Dublin. N was so delighted with the dress that she immediately demanded to wear it, so she stripped down in garden we were having lunch in and put it straight on. What better compliment is there?! The fabric is some beautiful Nani Iro double gauze that was a gift from Neko Neko fabrics and I think I have enough of it left over to make another Geranium dress for my niece, Katie. I've already made her quite a few Geranium dresses and she loves them - her favourite, understandably, is the one I made her from some scraps of Cath Kidston mushroom fabric. It's such a sweet pattern and so quick to put together! 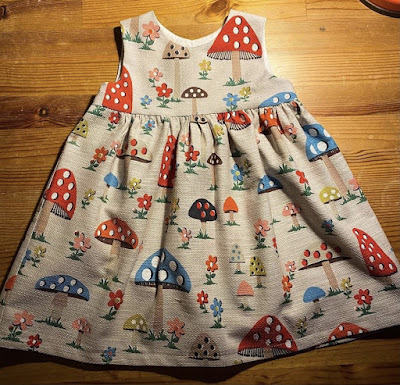 My most recent make is another pinafore dress - I have also been making less-utilitarian things in the last year, but when I crave comfort on a chilly day, there is nothing quite like dungarees or a pinafore dress. As a leaving present, my colleagues in my old job gave me a very generous €150 voucher for a fabric shop in Dublin called Cloth and I used it to finally buy myself a copy of the Apron Dress pattern by The Assembly Line and some beautiful 14oz indigo denim to make it with. I also bought some navy twill to make a pair of trousers for Nic and some Liberty lawn for a dress for myself at some point, but the apron dress called to me first of all. I'd admired the pattern for some time but had been put off by the high price point and also because initially the pattern's size range was very small AND you could only buy the pattern in single sizes. Both of these issues have been addressed - the pattern now comes in multiple sizes and the size range has been expanded so the waist measurement goes up to 49 inches, which is more inclusive than it had been previously. 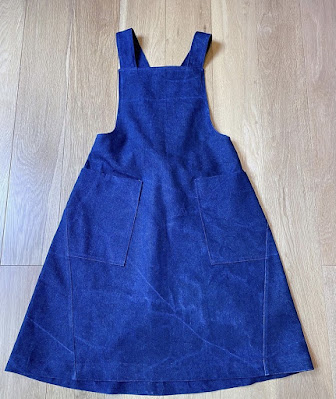 Just a little flatlay on my kitchen floor!

This was a very quick and enjoyable sew. It took me most of a Sunday morning to make it - I listened to a couple of episodes of Double Love and before I knew it, I was done! There aren't many pattern pieces and I found the instructions to be very clear - I liked very much the way the drawings were labelled with a, b, c etc corresponding to the different steps in the instructions... it's a little difficult to explain but it worked well. The design is fab - the skirt's side seams curve to the front and the pockets are angled so that they are anchored into the side seams, but they are cut slightly bigger so that they don't lie totally flat, which gives an interesting shape. I really like the shape of the skirt. 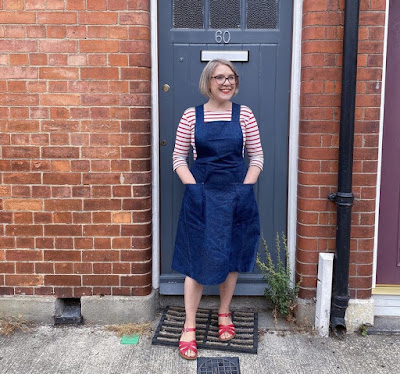 The Assembly Line Patterns Apron dress with stripy top and saltwater sandals - the wrinkles at the waist are because I had worn the dress a couple of times before photographing it!

The closures at the back are a little odd - again, this is difficult to explain but there is no closure as such on the dress - it's all in one piece and it is pleated at the back to allow you the space to get into the dress, with the pleat closed and fastened either with buttons or with snaps. I had navy buttons in my stash and so I used those. Because of the way the fold in the pleat sits, one of the buttons has to pass through two buttonholes to fasten and this is !!extremely!! awkward to do behind your own back. I am pretty flexible (and a year and a half of regular yoga has helped with that) and I found it a struggle. Someone on instagram told me that she just wriggled into hers and when I tried that I found it manageable. Snaps might be easier to deal with if wriggling into a dress isn't possible for you, but in a heavier fabric I'm not sure how secure snaps would be. 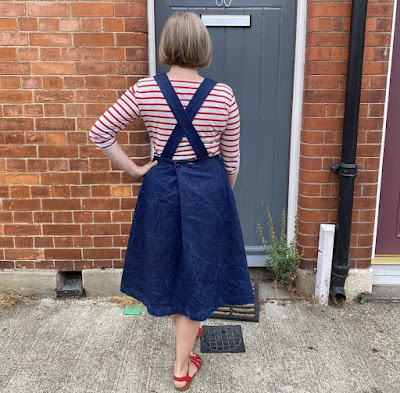 The other slight criticism I have was on the instruction for the straps which, to my mind, would leave quite an untidy finish on the inside. It has you just... sew the straps down on the inside? Like, not sandwiched between the facing and the bib? Just on top of the facing?? There are no instructions to finish the ends of the straps to make them neat. I sandwiched the straps between the bib and the facing, which is a very easy step to do, I just found it odd that it's not in the instructions to do this. Anyway! I made a size small but I think if I were to make another I might make the XS as the bib is a little big... and I probably will make another one because I wore this three times in the week after I made it. I feel great in it and I think it will be very handy in the autumn and winter. I mean it's been handy enough in Ireland in August... but then I didn't move here for the great climate.

Changeable weather aside, we have been having a lovely time here. We had my sister and her boys come to spend the day with us a few weeks ago, which was magical - all we did was have a picnic in the park at the bottom of our road (it was too hot that weekend to do anything else) but it was just such a joy to be able to spend such relaxed time together. We have friends from Leamington visiting this weekend - they are here because they have family in the area, but it'll be so good to see them and then the weekend afterwards one of our nephews is coming to stay with us for the night. This is very exciting as ever since he was old enough to talk he has been asking to come for a sleepover at our house. It'll be brilliant.

We have also been getting out and exploring as much as we can. A few weeks ago we had a lovely sunny day in Dún Laoghaire, just strolling along the coast, watching the seals and the sea swimmers and even having a little paddle: 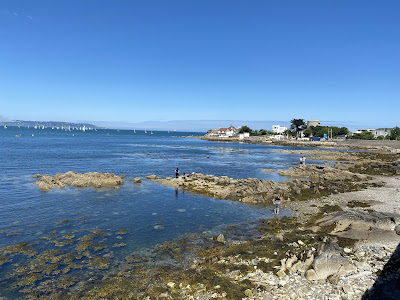 Sandycove and The Forty Foot 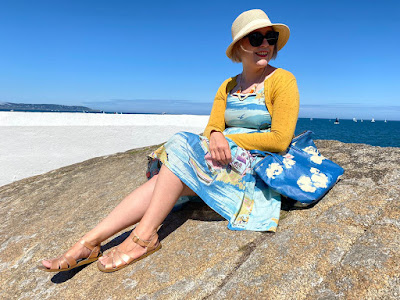 My Mum told me I look like a granny in this hat, but I like it! Also no burned scalp, so...

On a not-so-sunny day on Saturday we went up the coast in the other direction to Malahide and had a rainy, windswept stroll along the estuary there. It was lovely. I love living on the coast more than I can say. 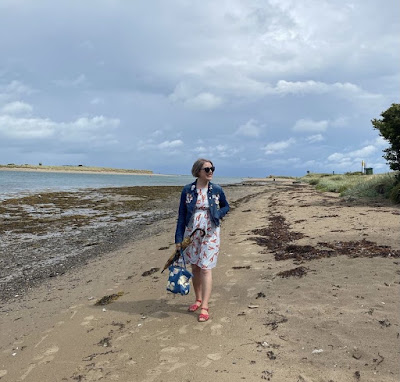 I'm wearing a dress that I made in early 2020 - it's a By Hand London Anna dress made from a RTW dress I bought and took apart. Yes, it's another dress with lobsters on it!
Other than that, life has been quiet and uneventful. Well apart from the fact that Nic won us a jeroboam of rosé from our local independent supermarket, Donnybrook Fair: 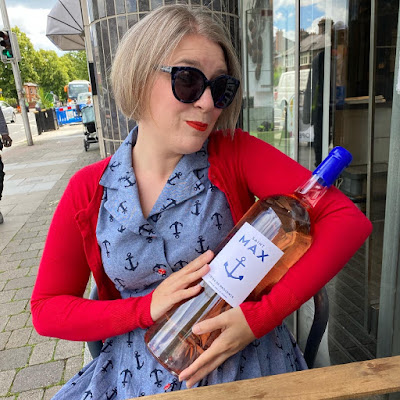 Yes, we are very proud. The trouble with moving somewhere new during a global pandemic is not knowing enough people to share a 3 litre bottle of wine with... so we are currently awaiting the perfect opportunity to open it!
That's the craic with me for now. Look after yourselves and sure I'll see you soon!
Posted by Roisin Muldoon