So, ah, Greg tells me you're gay now. How's that workin' out for you?

Writing about The Re-emergence of the Happy Movement

I enjoyed reading my old friend Adlina's thoughts about what her blog should contain. As I have moved away from my Myspace list-a-day type blog I have been thinking about this too. All of the blogs that I read frequently and admire manage to combine personal thoughts and reflections with writing about culture and pop-culture and ideas. Obviously this is what I'd like to emulate, but everyone needs to strike their own balance and I have been trying to figure out where my line falls. There have been a number of times when I have sat down to write something really personal and have stopped short because, although there are only a very few readers, I'm not sure how I feel about revealing myself in that way. I suppose I can always take down something or edit it if I feel I have strayed into too personal territory, but as I say, I need to figure out what exactly I constitute to be too personal.

Adlina writes:
I believe that all writers, bloggers or mainstream have to take time and think about the consequence of their written word – the pen is mightier than the sword.

This is a good rule to live by, I think, and one that doesn't necessarily come easily to me. Bad experiences with people in the past have taught me (frustratingly slowly, sometimes I think I am doomed to keep repeating the same mistakes) that it is as well not to be too open, both in person and in writing. It's a balance that I constantly struggle to strike in my everyday life as well, and not just with those people who were partly responsible for the bad experiences I have alluded to. Being too honest about my feelings to my friends has resulted in them being too honest too, leaving me feeling vulnerable and wounded. I don't think I want that level of exposure and risk in my blog.

With that said, though, what is the point of writing in a public way if I keep everything hidden? What am I writing for? Is it just shouting into the void? I think I need to examine my reasons for wanting to write and my expectations of what it will give me, and what I will get out of it.

Yesterday evening Nic and I headed into Coventry after work. I had an appointment, and I met Nic in Whitefriars when I was done. We had a poke around Gosford Books and the owner was on rare form, even taking us outside to have a look at the archaeological dig that is going on in his back yard. I love Gosford Books, and I think that Leamington suffers from not having a good bookshop like it. I know we have a massive Waterstones (which, depressingly enough, has its own section devoted to Dan Brown) and Oxfam Books, but neither of those can do what a good second hand bookshop or independent bookseller can do, I think. I picked up another Patricia Highsmith (Ripley Under Water) and that Suspicions of Mr Whicher book, which I supsect will irritate me. Admittedly, I could have bought either of those in Oxfam but then I wouldn't have been able to have a discussion about mediaeval ruins!

List of love
Roddy Doyle - The Van, which was light relief after all of the murder and lying in the Ripley books
Batman: The Animated Adventures. This is even better than I remembered it being, much funnier, especially Mark Hamill as The Joker. I still think Batman: Mask of the Phantasm is a better film than Batman Begins so I think I will watch it again soon.
Still loving NYPD Blue and the first season is much better than I thought it would be (I thought I wouldn't like it as much without Jimmy Smits) I especially like the interaction between Sipowicz and Donna, although it is limited. The best thing, though, is definitely Nicholas Turturro. He is brilliant, and that's not me being in any way ironic.
Star Trek: The Next Generation is still all kinds of awesome.
This bag, which I will be buying when I get paid: (The Nica Berrie bag in Damson) 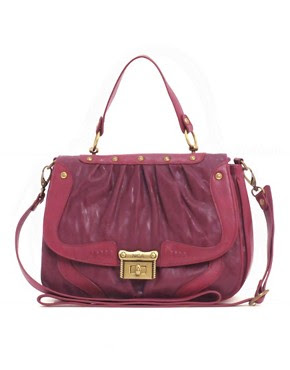 Fever Asturias dress in red - with black knee-high boots and my red hat. Planning my winter wardrobe already, how sad?!

List of loathe
Nothing especially at the moment, I'm feeling quite mellow at the moment. I have some underlying sources of irritation (I think it is territorial angst) but all in all, I'm feeling pretty chipper.
Posted by Roisin Muldoon