I had a proper back-to-school feeling when I woke up this morning, and not in the nice new-stationery-and-shoes way either, it was more like I was moaning 'I don't want to go back to work!'

But go back to work I did, and it is lunchtime now. I'm taking a short break from working on another spreadsheet to write, and it is very nice to tear my eyes away from Excel, even for a short time!

I had a most enjoyable bank holiday weekend in Kent. The weather was beautiful and we were able to ramble around, sit on the beach and have a paddle in the sea. We were even able to have a fire on the beach and watch the local festival fireworks. What was especially good was not getting horribly sunburned, as I did last time I was in Kent. I did sustain a minor head injury, however, when I banged my head on the arm of the sofa (misjudging the distance when lying down) I now have a cartoon-style lump on the back of my head! Our journey back on the bank holiday was suitably horrendous - we were stuck on the train from Folkestone for well over 3 hours, most of that spent stationary on the track between Orpington and London Bridge while the police attempted to talk a suicidal man down from the gantry of the signal box. I'm not sure what happened there, in fact, as we were just told that the situation had been resolved. The windows on the train were locked shut and it quickly became intolerable on the train - hell really is other people, or more specifically, other people and their horrible spoiled screaming brats. I could rant on for some time also about the horrible spoiled mother (not the mother of the screaming brats, another one) who berated the poor refreshments trolley man for having run out of water and blamed him for the discomfort of her son. Actually, she was horrible when the train finally made it into Charing Cross as well, pushing through people at the ticket barrier and then whistling and shouting when she couldn't get past. Grrrr!!

That small discomfort aside, it really was a lovely weekend. We spent some time in Hythe, which was lovely. I'm not going to get into being negative again, but I suggest that if you are in the area that you avoid the Nutmeg Cafe on the High Street as only once in my life have I received such poor service. I had good fun browsing around the antiques stalls in the Malt House and was lucky enough to find some lovely items of Hornsea pottery. If I had been closer to home I would have bought the entire tea set but as I had to carry stuff back up to Leamington I contented myself with buying this: 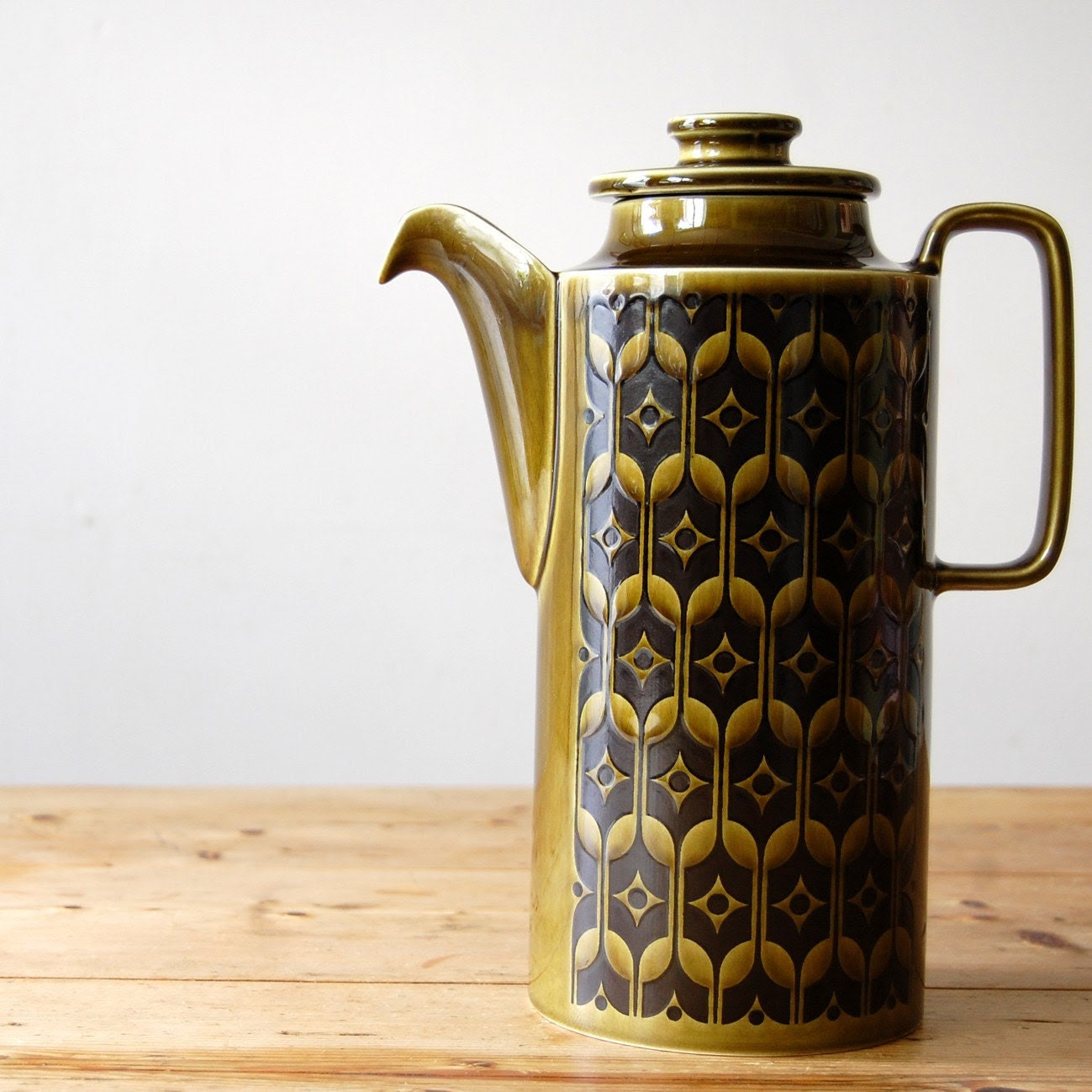 And also one of these

Which now houses my tea bags (it says tea on it) I already have two of those jars, in the same green as the coffee pot, and have been looking out for Hornsea items ever since. I was pleased as could be with the coffee pot, however, as I have been on the hunt for one like it for ages now. I don't have the space in my little flat for a full collection of things like this, but it is nice to have little bits and pieces and I will be picking up more when I find it. I also quite liked the look of some Port Merion tableware too, but I already had more than I could comfortably carry!

The creative quarter in Folkestone was open this time - on our last visit we missed the opening days (most shops are only open at the end of the week) and I was finally able to visit Rennies, whose window I peered through for ages the last time I visited. I didn't buy anything, but certainly plan to. The shop is tiny, and the owner is so nice and friendly - I certainly recommend it!

The other thing I bought this weekend was that lovely Nica handbag. After the horrendous journey home yesterday I bought it for myself from the John Lewis website. It was £10 cheaper than direct from Nica, but I spotted it on eBay immediately after buying it. I've consoled myself with thinking that a)I'd have to wait for ages for the auction to end, b)I might not have saved that much money anyway and c)well, I can't really think of a c but I think I got it for a good price anyway!

I've also made a hair appointment - I think the front has finally grown long enough for me to go and have it bobbed again. I'm hoping that by this time tomorrow I will look a little like this:

I'm sure this is wishful thinking, but anyway - it will be good to have it looking in shape again!

List of love
My flat. I was so glad to get home last night!
The Gurkha Palace Nepalese restaurant, Sandgate
Having a fire on the beach
Tony Curtis Laserlight videos introductions
Adrian Mole
Pertwee. Always Pertwee.

List of loathe
Rude commuters
Rude, pushy parents
I have to say, I'm not so keen on The Strand
Nutmeg Cafe, Hythe. Bad, bad times.
Posted by Roisin Muldoon