I'd offer you a beer, but I've only got six cans.

No serious blog this time, as I haven't been thinking any especially serious thoughts this week. Also, my last effort at writing about something other than what I have been doing....well, I think it needs to be refined a bit!

Last week was my birthday, and it was lovely. I have already written about the Vortex Jazz Cruise, which Nic took me on a week before my birthday, so I won't talk about that again. I had a good but uneventful work week, and had Friday off on leave. I had a really enjoyable birthday, starting with poached eggs on toast with Nic, and the second part of my birthday present from him. This was every episode of Cagney and Lacey, with a handwritten episode guide and a comic strip birthday card. Put like that it sounds a little bit bald, actually, but I love Cagney and Lacey and it is a programme that holds some significance for us, so I was delighted. We spent the morning watching a few episodes (it was very exciting to watch episodes I had never seen before) and then had a potter around town and lunch in Warwick. Tom and Paul came over in the evening bearing gifts and cards (Jeeves and Wooster, The Likely Lads and some other hand-made presents) and M joined us shortly after for a drink before going over to the Somerville. I felt very lucky to spend the evening surrounded by the people I love.

Nic and I had a stressful time trying to get back to Northern Ireland as planned, but we did eventually make it (I won't bore you with the details!) and it was worth the stress. My parents met us at the airport and took us to Bangor for an afternoon out. I'd never been to the NI Riviera before, and it was a lot of fun. I think my mother was a bit disappointed with the seafront itself - she had been expecting it to be more like Bournemouth, I think, but we climbed over the rocks and walked along the beach and thoroughly enjoyed ourselves. And it really is very pretty: 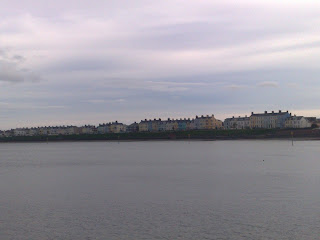 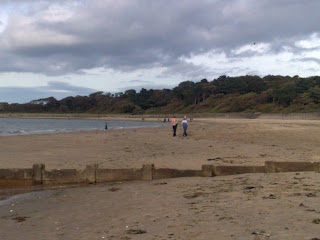 My dad tried to make friends with every dog on the beach, with varied success. Nic and I both had a paddle in the sea, which was beautiful, but I had forgotten how annoying wet sand is in your shoes. After a wander around the town, we headed over to Donaghadee and walked out onto the pier: 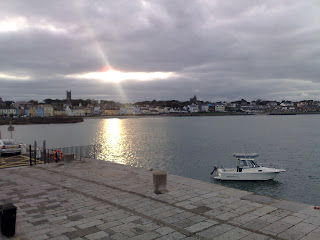 Again, I had never been to Donaghadee before. Maybe it was partly to do with the time of the evening, but I thought it was beautiful. We had dinner in a seafood restaurant (it was our only choice, but they did also have vegetarian food) and then stopped to buy Nic his pudding: 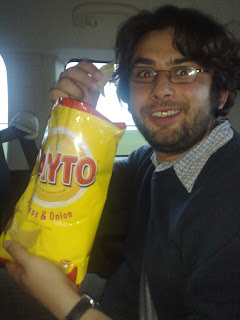 We stopped off with my grandma and aunt on the way home, and it was quite late before we got back to Dungannon. My sisters and brother were there, and so was my birthday present from my parents: 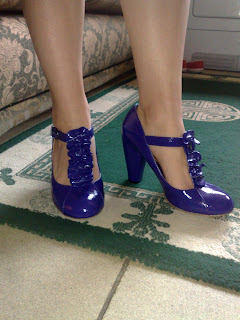 Shiny, beautiful new shoes! I did feel like a little girl when I put them on because I was so excited. My mum was delighted as well, as she had chosen them - always a bit of a risk to try to pick out shoes for someone else, I suppose! Anyway, our time at home was very short so Nic and I spent as much time as we could just pottering around the house and chatting to my mum and dad. We had lunch in Coffee Bean a few times, and in Menarys. This has become a tradition, every time Nic and I are in Northern Ireland we go to Menarys. It is reassuring - so little really changes in Dungannon.

On Tuesday evening Nic and I met up with my old friend Paul for a few drinks in Hagan's on Irish Street. It was one of the best evenings out I have had for ages - I haven't seen Paul for a few years, and he and Nic had never met. Within a few minutes they were getting on like old friends, and it was one o clock before we knew it. It is unlikely, I suppose, that anybody reading this will be visiting Dungannon any time soon - but on that slight chance I can highly recommend Hagan's for a good night out, with table service! It was so good to see Paul again - he has been a good friend for a long time and I'm hoping that a visit to Hagan's with him will become as much as a tradition as getting a coffee in Menarys with my parents.

Maybe reading this blog entry was a bit like sitting through someone's holiday photos - so maybe I will try to write something a bit more interesting or topical next time.

List of love
Colm Meaney in The Van. The film couldn't quite do what the book did, but I enjoyed it all the same. Colm Meaney is so cute!
My new shoes (I'm still highly excited about those)
Coffee Bean
Club Tonic Water in my gin and tonic (not as good as Schweppes, much better than Britvic)
Skimming stones in the black lough
King of the Hill
Jeeves and Wooster
Excellent Women by Barbara Pym
Finding money in my Ulster Bank account

List of loathe
Ryanair planes. Oh, boke! I though travelling on a Virgin train was bad, at least they're not trying to sell you something every five minutes. Also, you know a plane is cramped when I am stuck for leg room.
Extreme hangover cures
Posted by Roisin Muldoon