Listen, to be believable you have to get a furry hat and a snow machine!

Well, almost. There is a lot of snow in Leamington, and I've spent the day at home. I had planned to work from home anyway, so I didn't quite have the excitement of waking up and realising I could stay at home, but I'm not complaining. I got sent home from work early yesterday, so it's all good. The snow is very exciting, and Nic and I braved it earlier to go to the post office and do a few other chores in town, as well as taking some photos: 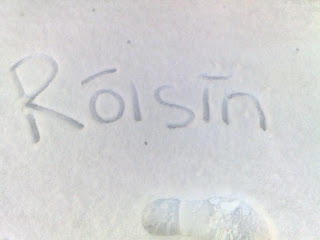 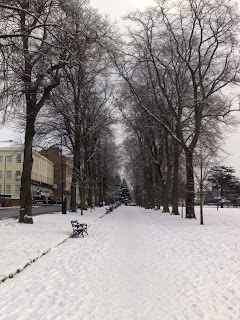 Like most of us, I'm a big child when it comes to the snow, so I was unreasonably excited to lean out of my bedroom window last night and watch the snow falling on my street. Oh, and also I was excited to experiment with making my clothes winter appropriate. Well, almost. I got out one of my favourite summer dresses and put it together with the jumper Nic bought me: 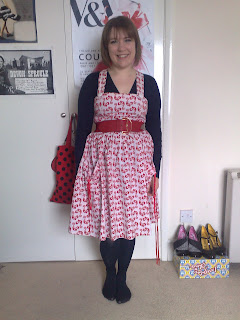 I wasn't sure about the combination of a v-necked jumper under the straight neck of my dress, so then I tried it this way: 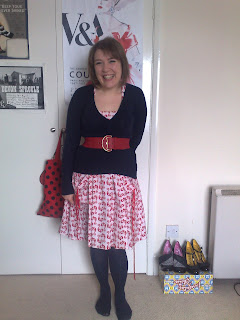 I'm not sure if it is better, but I couldn't be bothered changing it back. I think the first look is a little bit What Katie Wore, or at least it would have been if I'd had some nice big plastic jewellery to go with it! When I went out I put on my red cowboy boots and red beret, overall I think I like the effect. I've been inspired by the way Katie puts her outfits together so I have been trying to be more thoughtful about the combinations I make. I had poor Nic tortured, asking for his advice and then getting him to take the photos. He's very good about it, I must say!

Unfortunately, our Vax vacuum cleaner dream might have to wait until next month. When Nic got home yesterday, he hung up his coat in our wardrobe, and the wardrobe collapsed! It's a built-in wardrobe, and the rail holding the clothes (which is also attached to the shelf above it, which holds almost all of our other crap) pulled away from the wall. It's not something we can fix, and the estate agents can't have someone out to fix it until tomorrow. At the moment all of my dresses are in boxes on the floor, which is very sad. Anyway, we've decided to go to Ikea and buy some more furniture instead, it's more pressing at the moment. So, no Vax or Henry or Hetty for us until February, I think. But we will have another much-needed bookcase, and some drawers so all is not lost. It was pretty stressful, though, and the estate agents had the joy of coming into the office this morning to find a cross message from me on the answering machine!

After folding up all our clothes and putting them into boxes, Nic and I went round the corner to see Sherlock Holmes in the cinema. Tuesday evening is apparently a good time to go, the cinema was almost empty so we didn't have to deal with other people being irritating. I really enjoyed myself. They showed loads of trailers, including one for Clash of the Titans - I can't find the cinematic trailer online, but it made me laugh so much. In fact, they showed it twice. It looks like Lord of the Rings, but even more lame, and with Liam Neeson and Pete Poselthwaite in it. I enjoyed Sherlock Holmes even more than I enjoyed the trailers (a considerable amount) I'm not normally the least bit interested in action films, but this was just so much fun. It was very funny and, while I could have done with a lot less of Guy Ritchie pratting around with slowing things down and then speeding them up, I thought it was very well directed. And, even though I normally hate Jude Law, I thought he was excellent. In fact, I think he was my favourite thing about the film. The relationship between him and Holmes was so good, and he limped well, and I thought his comic timing was excellent. I'll definitely be buying this when it comes out on DVD. I did have a moment when walking back when I thought about how amused I was by Nic looking at vacuum cleaners - me praising a Guy Ritchie film, and praising Jude Law? The Roisin of 8 years ago would be so disgusted with me right now!
Posted by Roisin Muldoon