You got a lot of morons in your family? Because that could be genetic.

Another in my series of blog posts on totally uncool stuff I like. This is my Cop Show Edition.

NYPD Blue
This one is not 'uncool' as such, it's more that it's not really our generation's TV show. NYPD Blue aired in the 90s, when I was too little to watch it, but I was introduced to it in the past few years by Nic and Tom's love for it. Sadly, only seasons 1-4 are currently available on DVD and I don't think that it gets repeated on UK TV very often. I'm especially keen on seasons 2-4, after David Caruso got a bit too big for his boots and left, to be replaced by Jimmy 'Jimmy Fits' Smits. I've written before about how much I enjoy ensemble drama and this is no exception. The main cast of NYPD Blue is cracking. The central partnership of Detective Andy Sipowicz (Dennis Franz) and Detective Bobby Simone (Smits) is amazing, and one of the ways that the show rewards continuous viewing is the way in which the partnership develops. Andy is an angry recovering alcoholic who is extremely resistant to change. He was devoted to his previous partner John Kelly (Caruso) and is very suspicious of Simone, who has risen up through the ranks after driving the police commissioner. Simone is a good cop, and the pair quickly tighten up, despite their different attitudes. Sipowicz is my favourite character but he can be difficult to like.

Yeah, I heard the term 'mutual respect'. Have you heard the term 'kiss my ass?'
Andy is belligerent and angry and he holds some racist views, which brings him into conflict with Simone and with the squad's commander, Lieutenant Arthur Fancy. He is also caring, suprisingly tender and very loyal, and he's an incredibly engaging character.
The show fits firmly into the 'police procedural' genre, but NYPD Blue does much more than conform to its genre. One of the things that I like so much about it is the way that comedy is integrated so well into the main action. Detectives Greg Medavoy (Gordon Clapp) and James Martinez (Nicholas Turturro) are especially adept at this, although their characters are more than just comic relief. In fact, I'm always amazed that Nicholas Turturro hasn't done more since, because he is so good in NYPD Blue. There are also some fantastic and interesting female characters. The squad's PAA, Donna Abandando (Gail O'Grady) is a good example of this. She has integrity and manners and brains, and there are so many fine moments where the camera cuts to her reacting to something that is going on in the squadroom, and it lends an extra depth to the drama.

Gail O'Grady as Donna Abandando
NYPD Blue is what you might call 'gritty' a lot of the time, but it has a great deal of heart and I think it has stood the test of time. Finally, the Mike Post theme tune is amazing - look it up on YouTube if you don't believe me!

Cagney and Lacey
I have a massive emotional connection with Cagney and Lacey. I became a fan of the show when I was doing my A-levels and, when Nic and I were first falling in love I confessed my geeky love of the show only to discover that he loved it too! Only a small number of episodes are available on DVD, but the entire run of the show is available for download from iTunes.

I could probably write for days and days about how much I love Cagney and Lacey, or I could just flash you my Cagney and Lacey keyring so you could see first-hand what a huge fan girl I am. Again, the show has a cracking cast. I can't find a good enough picture of all of the main cast, but like NYPD Blue, the show works very well as an ensemble drama. At the beginning one of the thrusts of the show was how these two female detectives could fit into a male-dominated profession, but as the show develops it becomes more about how the team of detectives in the 14th precinct work together.
For me, the most interesting thing about Cagney and Lacey is its portrayal of women. It was created by two women, Barbara Avedon and Barbara Corday, and the crew included female directors, producers and writers. Chris and Mary Beth are intelligent, hard-working and dedicated detectives and, while they do their jobs as well as, or better than the men in their precinct, they bring their own beliefs, feelings and ethics to their jobs. They represent different sides of the feminist agenda as well. Chris is intensely ambitious and dreams of becoming the first female police commissioner. She is wealthy, intelligent and cultured and she leads a single lifestyle that Samantha Jones would admire. Mary Beth is no less intelligent, but for her policing is her job, rather than something that defines her. She is happily married to Harvey Lacey (I LOVE Harvey Lacey) and is a working mother trying to make ends meet. She is liberal and open-minded, and she is also the more outspoken feminist of the pair.
Like NYPD Blue, Cagney and Lacey is fairly gritty and it doesn't shy away from issues. And like NYPD Blue, the show has a lot of heart, and it has a brilliant title sequence as well, which you can check out here. Cagney and Lacey still stands up today, and is well worth watching.

Inspector Morse
If you've been reading my blog over the past few weeks and months, you've probably noticed that I've been watching rather a lot of Morse recently. I used to mock Nic for liking it, but when we watched an episode as part of a Detectives Day that we had with Tom and Paul, I realised that I actually liked it a lot. I don't think anyone is really going to criticise the quality of Inspector Morse, so I won't get into defending it. Instead I'll tell you some of the things I like about it. Of course, one of the main things is John Thaw as Morse: 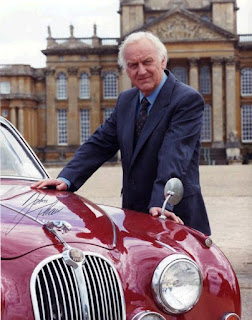 I love the fact that he is so grumpy, and that he sometimes gets it wrong. There is something very attractive about Morse as well, it might be the grumpiness. Like all the best TV detectives, Morse is a cat that walks by himself. He's never risen past Chief Inspector because he's unwilling to grease the wheels, and he frequently clashes with Superintendent Strange (James Grout, who is just brilliant in the role) as a result. His relationship with Sergeant Lewis has more than a little of the Holmes-Watson dynamic about it - Morse affects to see Lewis as a bit of a plodder, but really he depends on him. Kevin Whately is truly excellent as Lewis. I've written about this before, but he is very quietly charismatic, and he has such an eloquent face.

There are lots of other wonderful things about Inspector Morse like the Oxford setting, and the many and varied guest stars. Some episodes are better written than others, but you can always get stuck into trying to solve the mystery, and I like that. And again, the theme tune is marvellous.

New Tricks
I LOVE New Tricks. I love it so much that the theme tune is the ring tone for my phone. I actually downloaded it as a joke, initally. I was pretty amused to think that probably the only two people in the country who had it were me and Dennis Waterman, but I liked it so I kept it (although I am considering replacing it with the Inspector Morse theme when I get a new phone later in the year.) New Tricks is a funny one, because it is quite silly in comparison with something like Morse. However, it is (usually) well-written and the writers really know how to play to the strengths of the show. The key strength of the show is the premise and the cast. The premise is that the Metropolitan Police have set up UCOS - the Unsolved Crime and Open case Squad, using the expertise of retired detectives to clear up old cases: 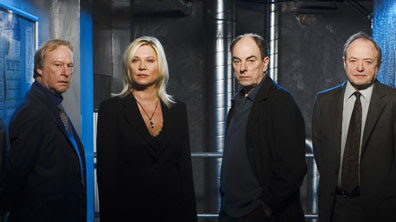 The UCOS squad
The fact the the main cast are well-loved character actors is something that the writers draw on very skilfully. For example, Dennis Waterman's character, Gerry Standing, seems in many ways to be a logical evolution of DS Carter from The Sweeney and Minder's Terry McCann. James Bolam's character, Jack Halford, is a bit of a grumpy outsider like Terry Collier of The Likely Lads. The chemistry between the cast is very visible and the writers build on this in a very satisfying way.
The boys are led by Superintendent Sandra Pullman, played by Amanda Redman. She's a good female character in the mould of Christine Cagney; motivated, ambitious and very talented. Episodes frequently include a moment where Pullman's by-the-book attitude has to give way to the boys' more old-fashioned techniques, but she is clearly in charge: 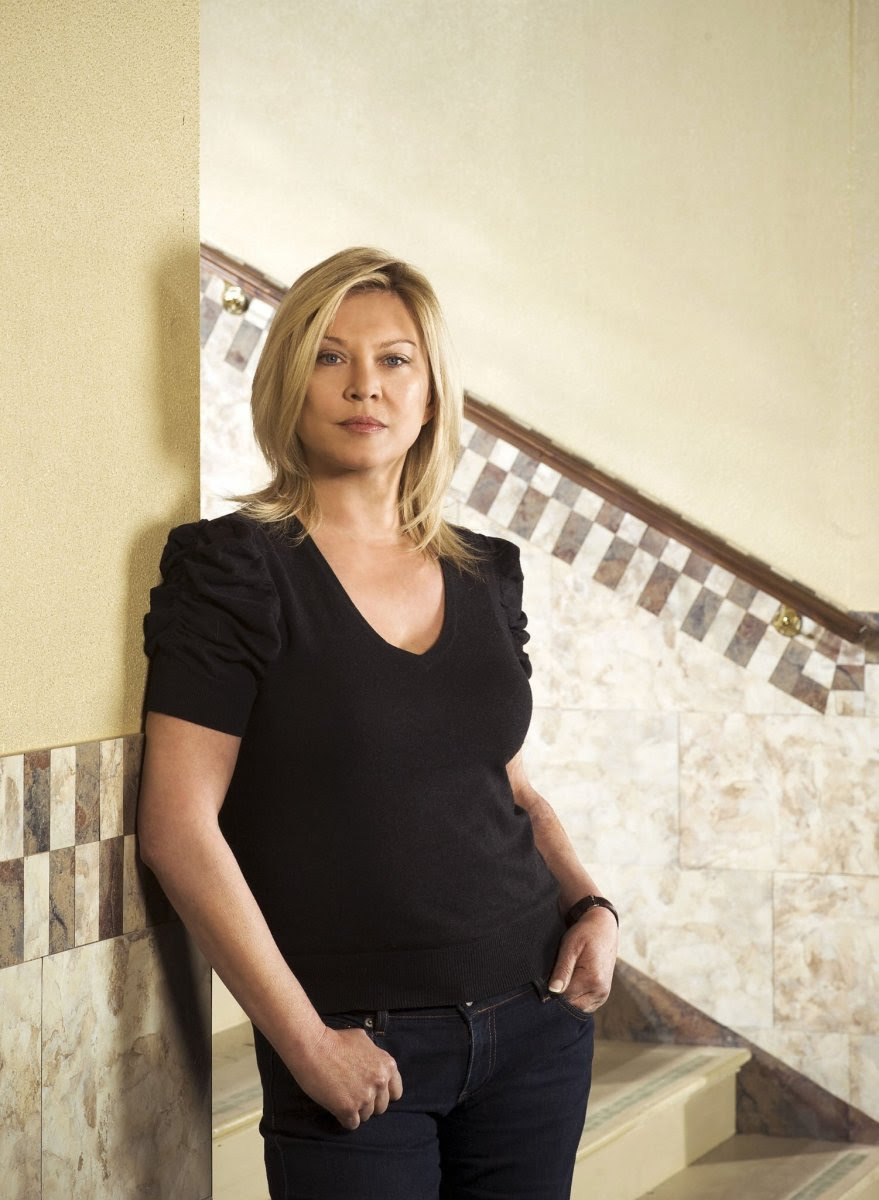 New Tricks is good entertainment, and I think it is very rewarding to watch. This is why I have it on DVD and have the theme tune as my ring tone. It's not just because I am an enormous nerd, right?
Posted by Roisin Muldoon