There is a horse in my cabaret suite.

It's only 4:15 and it's already dark outside, because it's all clouded over. I'm just hoping it doesn't rain because I have to go out in a while. GRUMBLE! Actually, it'll be lovely because I'm going to a friend's wedding, I was just casting around for some sympathy and attention there.

So, after what was a stressful and pretty miserable week, I was in need of some nice fun things to happen this weekend to cheer me up. I was not disappointed, so far it has been lovely. At work on Friday I had a long talk with my manager about how I have been feeling about work and, although there was only so much that she could do to help, it really made me feel better to have talked about it. I don't think it's going to get any easier, and the next few months are going to be pretty tough going, but talking to someone about how I have been feeling was a really positive step. I felt like my load had been lightened a little bit by the time I left the office on Friday afternoon.

My dear Sugar Plum's brother and sister-in-law had invited us round to their house for a barbeque so, after a cup of tea and a sit down and a cuddle with Nic at home, off we went. It was a really nice evening. Thankfully the weather held and we didn't get rained on, the food was delicious and the company was really good too. I was absolutely knackered by bedtime, but it was the good kind of tired, so that was nice.

I'd like to say that Nic and I were up bright and early on Saturday morning, but we weren't. I needed a lie-in, so we had a lazy morning and a leisurely breakfast before getting out into the sunshine to walk over to Warwick. It was pretty summery, so I put on one of the frocks I bought a few weeks ago from Ebay: 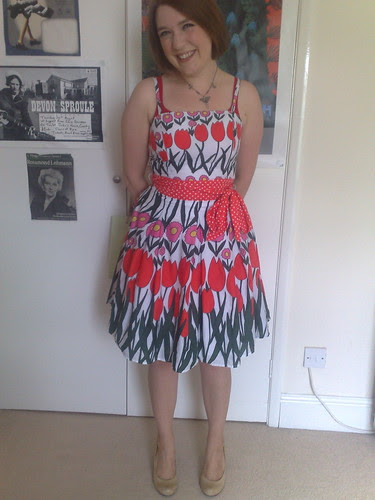 The walk over to Warwick was gorgeous, and when we got there we saw that Warwick Folk Festival was on, so there was lots going on in the town. We stopped and had a picnic in St. Nicholas Park before having a look in the street market that was being held on Smith Street. I had a vague plan in my head of having a look in some of the antiques shops for some Hornsea pottery, so I was very pleased to find a new stand in the antiques market that had lots and lots of vintage homeware. I chatted a bit with the owner, and bought two Heirloom coffee cups and saucers in Autumn Brown: 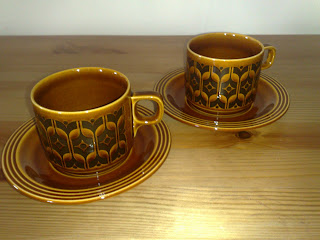 As I've written before, what I really want is an Heirloom teapot, so I left the lady my name and number should she ever come across one. She was very lovely and helpful, and I'll definitely be back - perhaps post-payday because she had a beautiful teak and glass coffee table from the 70s that would be a nice replacement for our very basic Ikea model! Nic and I had a browse around the charity shops and ended up in Oxfam, only to find: 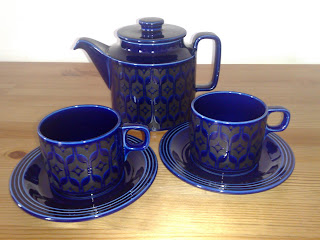 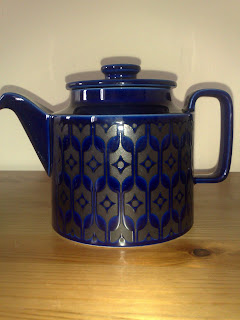 A Hornsea Heirloom teapot in Midnight Blue, along with six cups and saucers, six dessert plates, a bowl and a sugar canister. I tried haggling with the lady to see if I could buy the teapot just by itself, but she was (understandably) reluctant to break the set up. Instead she gave me £10 off, saying that she was going to put it into the sale next week anyway. So, I felt a bit extravagant but very happy - the teapots are hard to find, and the blue ones even harder, and everything in the set is in perfect condition. Naturally enough the first thing I did when I got home was to make Nic and I a pot of tea with it! The second thing was to clear out some cupboard space, so now I have a boxful of kitchenware to go to a good home.

Our lovely friend Viv had invited us round to have dinner with him before going on to the Somerville for a few drinks. I felt like getting changed (hey, those dresses aren't going to wear themselves) and giving the Lady Dragons an outing, so I wore this: 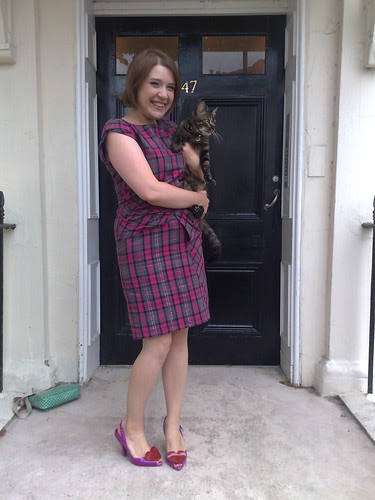 The little cat lives on our street and he was curious about what was going on. He's none too bright, however, he was the one that got stuck up a tree on our street last Saturday. When we got to Viv's he'd opened up a bottle of wine for us: 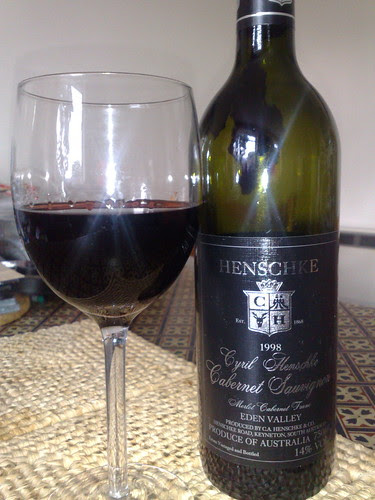 I know nothing about wine and haven't really liked red wine in the past. I'm game enough to give it a go, however, especially as this is one that Viv has been keeping in cellarage for some time now. It really surprised me, because I thoroughly enjoyed it. As I've said, I know nothing about wine so I can't give you any tasting notes on this one, just that it was delicious and I was happy to find that I could enjoy it. We enjoyed it so much that Viv opened another bottle of Henschke wine he had, a Shiraz this time, which also went down very well. So, we were pleasantly wine-filled as we took ourselves over to the Somerville to spend the evening with Lysy and the Scientist. We ended up having a really late night, but it was just how I wanted to spend my Saturday evening. It meant another long lie-in this morning, but that's fine.

Nic and I are just back from having coffee in town with Sugar Plum and, in the interests of completeness, here's what I have been wearing today: 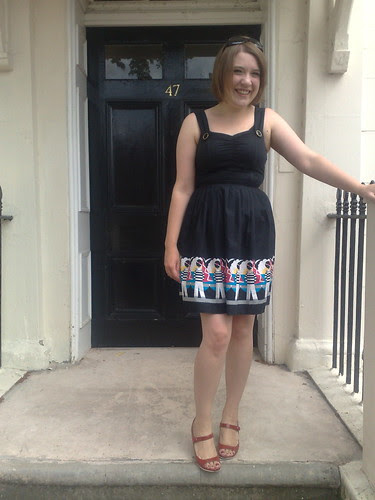 I don't have anything exciting or interesting to tell you about today because we have been very lazy - but maybe tomorrow I'll put up a picture of what I wore to the wedding. Once I've decided what it is I'm going to wear, that is. In fact, I'd best get off and do that now...
Posted by Roisin Muldoon