Only you, darling. Lanky brunettes with wicked jaws.

So, getting my blogging mojo back isn't as easy as I thought it might be. That's partly because things my end still aren't great, and also partly because I am pretty lame - but that's just the cross I have to bear, I suppose!

Anyway, it's all quiet at Clackett Mansions. Nic is busy working away, and I'm pottering around trying to raise my spirits. I may do some more sewing this week - after my success at making the Colette Ceylon dress I'd like to give the Rooibos a go. It looks like it may be a simpler pattern from the envelope but I think I'd still like to take my time at it. It's got another new thing for me to try, which is inserting an invisible zip. Actually, this isn't strictly new as I've done it before by hand when mending a dress but I've never attempted it with my sewing machine. I'll see how I get on - I enjoyed making the Ceylon very much but I'm conscious of not rushing into projects and burning out.

I had a really lovely day yesterday. I had a fairly lazy morning of reading before doing a little bit of work around the house. Nic and I went out for a walk at lunch time and he bought some Doctor Who videos in one of the local charity shops. In the afternoon I went out for coffee with my dearest Sugar Plum and, as the sun had made a brief appearance, I thought I'd give one of my summer dresses a last gasp at the summer: 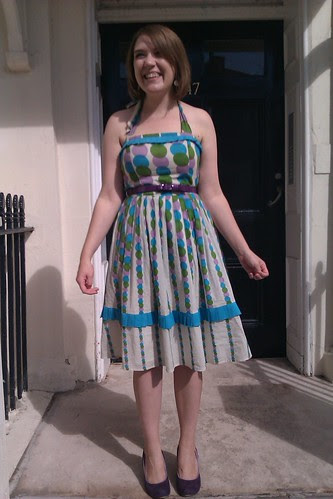 It was thoroughly wonderful to see Sugar Plum yesterday. I've had to make a real effort recently to push myself out of bed, out of my pyjamas and out of the house to see people, and it's evident that it's good for me. We had such a good time that an hour long coffee turned into four hours of chatting (returning to Clackett Mansions for Cherry Bakewells partway through - four hours in the local Starbucks didn't sound like such a good idea!) After Sugar Plum took herself home, Nic and I had dinner and watched an episode of Inspector Morse. It was one of the first films, but the last one I had left to watch - Service of All The Dead. I love Morse, but this one was a bit lame. The direction was shocking (a ridiculous number of shots composed around someone's reflection, and the ones that weren't framed the action through a window. It was highly distracting, added nothing to the mystery, and had a negative effect on the acting) Still, it did have some good things about it - a couple of scenes where Lewis and Morse were drinking in The Turf Tavern, a scene featuring a very young Gina McKee, and a brilliant bit in which Lewis and Morse are on the roof of a church.

Today has been VERY quiet, but in a nice way. Also, although my birthday isn't for another five weeks, I got my first birthday present! I've had my eye on a beautiful bag from Joules for some time now, in fact I blogged about it here a while ago. I had seen it while browsing in our local Joules store, and initially thought it was £40. Actually, the necklace wound round it in the display was £40, the handbag was considerably more, so I resigned myself to the idea of just occasionally going into the shop to ogle it. The other day I saw that it had been reduced in the sale - still more than I could afford but I decided to be reckless and buy it anyway - and then saw sense and thought better of it. I was chatting about it to my dear long-suffering Nic today, and he gave in and admitted that he had been planning to buy it for me for my birthday but was worried I'd get it myself and spoil his plan. So he bought it for me today! 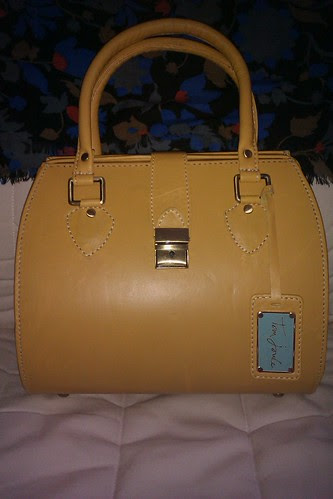 I'm not going to use it until my birthday but I admit it, I did put my things into it and parade around the living room a little bit this afternoon. Just to test it out, you understand. Then it's being wrapped up in its bag and being put away until the day itself. A bright yellow bag may not seem like the most obvious choice but I think that in the colder weather the bright colour will cheer me up. Mainly it's made me smile because it's pretty, and because I'm so lucky that my darling boyfriend is so kind and has such good taste!

Right, I really am running out of inspiration now so I'm off...have a lovely Thursday evening, everybody, and if you haven't already don't forget to comment to win a dress by Fever Designs.
Posted by Roisin Muldoon