Computers don't make errors. What they do, they do on purpose.

I am having a lovely lazy Sunday morning. Nic is getting a little bit of work done, and I'm stretching out like a cat, I used to hate Sundays but now they are one of my favourite days of the week. We have no major plans for today, maybe a walk along to the tip shop to donate some VHS and hopefully buy a few plates, as I'm hoping to gradually replace my plain white Ikea dinner plates with more interesting ones. Anyway - maybe this is fodder for a future blog!

It's been an unexpectedly tiring week, but it has been really good and I can gradually feel myself getting better and more positive. The beautiful sunshine at the end of the week certainly helped! On Wednesday afternoon Nic and I walked back over to the Saxon Mill. It's a gorgeous walk in the sunshine through the fields, and sitting outside by the river with a drink is one of my favourite things to do in the summer. The last time we were there was when JP and Hannah came up at the end of July, and we were curious to see if the crop circle we spotted then was still there. Despite the crops having been harvested, you could very clearly see the crop circle still on the ground so we ventured down to investigate. Neither of us could get a satisfactory picture of it, so I'm going to link you to one from some crop circle conspiracy theory website:

I have no theories about the creation of crop circles but many years of watching The X-Files did lead me to hope that if I looked up I'd see some sort of alien spacecraft overhead, or at the very least David Duchovny with a large torch. I didn't, so I had to make do with some lovely coffee and biscotti from The Saxon Milll. It was a really pleasant way to spend the afternoon and I experimented a bit with the vintage camera app I downloaded for my new phone (which is not an iPhone) 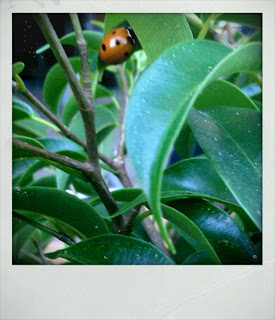 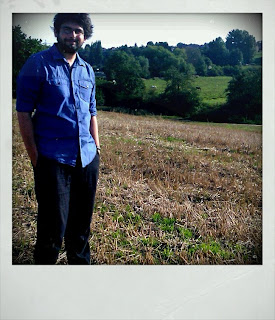 Nic wondering how the crop circle came to be there

I slept really badly on Wednesday night (maybe it was the exposure to the crop circle that did it?) and wasn't feeling at my most tip-top on Thursday, but all the same Nic and I decided to go out for a date in the evening. I finally got a photo of me in the Cezanne dress (this being the third time I've worn it) and decided to get in a pair of Shoe Challenge shoes before it gets too rainy to wear them any more: 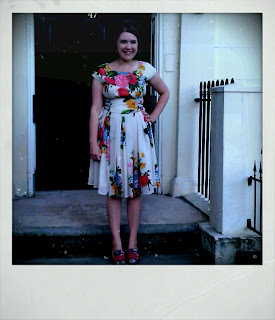 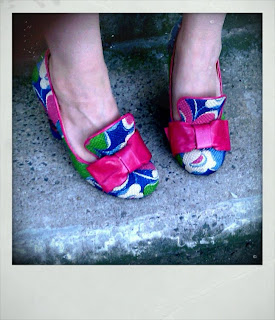 Actually, that photo of the dress is not at all representative but, as it was dusk, it was hard to get a better one. Still, this gives you an idea of what it's like on! I like the shoes with this dress - I think they clash, but in a way that pleases me! We had a very good time on our date - we'd planned to go for one drink in Wilde's and ended up running into my friend Meg and her gentleman friend who were doing exactly that, so we had sort of a double date. It was really good to catch up with Meg and I got to sample one of the cocktails in Wilde's - a very decent Cosmpolitan. Nic was less impressed with his Tom Collins, but it was the first time the barmaid had made one.

The weekend had been pleasantly social as well. On Friday evening we went along to the wonderful Somerville Arms to see Sugar Plum and N, Caroline and Dapper and Nat. As usual with an evening in the Somerville I looked up and suddenly realised it was very late and time to go home - I think this is always the marker of a good evening out! I needed to get home and get some beauty sleep because I needed to be up bright and early to do some baking ahead of the Sew Make Believe sit and sew that on Saturday afternoon.

It was cheat's baking, really. A while ago an acquaintance of mine gave me a recipe for bran loaf and it's so easy and satisfying that I have made it loads of times since. I call it cheat's baking because, apart from putting all of the ingredients into the bowl there is no effort involved at all. You don't even have to measure anything, it's brilliant. 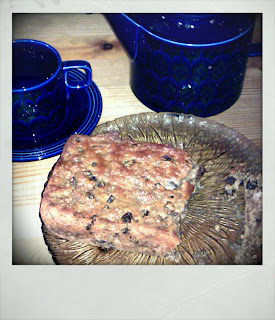 Easy Bran Loaf
1 cup of bran flakes / all bran / sultana bran (whichever you have in your house or local shop. I've used bran flakes myself)
1 cup of flour (of any kind. I like wholemeal, but anything works)
1 cup of milk (again, any kind of milk. I've made this with soya milk and it works fine too)
1 cup of sugar
1 cup of dried mixed fruit

So, you need to put the bran flakes, sugar and fruit in a bowl. Pour in the milk and leave the mixture to soak for an hour.
After an hour, stir in the flour. You can sift it, but you don't need to. Be lazy!
Put the whole mixture into a loaf tin and bake in a pre-heated oven at 180 degrees/ Gas mark 4 for an hour

This is really nice served warm with a bit of butter on it, but it is so moist that it's also great without. If you wrap it in greaseproof paper and put it in your cake tin it'll keep for a while, but you'll probably want to eat it before then. In fact, I might have some for my breakfast!

The sit and sew was a great success. It was the first one I'd hosted in Clackett Mansions and we had a smallish group of ladies along. I was able to use my Hornsea teaset (and coffee pot), which pleased Zoe a lot. I spent the afternoon sewing bias tape into the hem of my Rooibos dress, and then making some buttons out of the contrast fabric for the neckline. Lysy got started on a Fireman Sam costume she is making for her nephew, Zoe did some patchworking, Zoefruitcake worked on some cross-stitch while Sandi did some knitting. We were joined a little later by lovely Mama Kate who was making some crochet granny squares. The time flew by. One of the really good things about the afternoon was the fact that, as we were all working on something, there were natural and comfortable silences, and lots and lots of easy chatter as well. I'm really looking forward to the next one in October.

In the evening Nic and I made enchiladas (YUM) and popcorn and attempted to watch The Pelican Brief. We gave up on it after an hour and came to bed, because that film is SO BORING. It really shouldn't be, because I love the idea of the plot, but after an hour bugger all had happened and the dialogue was so painfully bad I couldn't take it any more. Also, I was getting really fed up of all of the leaps of logic we were supposed to make to watch it. So, the President is in hospital and there are no secret service operatives guarding his room? He's able to just open up the window and lean out to his fans in the street? That would happen? Clearly not. Also, if I watched my boyfriend be killed in a car bomb and thought that I was the target, I wouldn't be getting into any lifts, bad wig or not. I'm just saying. Still, it's a shame because I like Julia Roberts, the director is a good one...but the film sucked. The popcorn was delicious, however.

Okay, time for me to get up and about and do something with my Sunday. Have a nice week, everybody!
Posted by Roisin Muldoon