Not my face, I'm doing a photo shoot tomorrow for Vision Express

Oh, HELLO. Well, I suppose a few of you might have been thinking that I actually had dropped off the face of the earth for real, because despite my promise in my last blog that I'd get back on this....well, as you can see, I didn't. I've had a really tough few weeks and had some much needed time away from things. I'm starting to feel much better now, and the sun is shining, it's September...I have lots of reasons to feel positive, I suppose!

So, here's my usual disclaimer about how this entry is just about what I've been up to. Feel free to look away if you need to, I promise I won't cry too hard. As I said, I've had some time out and it has been really good. I've spent a fair amount of it sleeping, and reading, to be honest. I've also done a bit of sewing, most recently making the lovely Rooibos by Colette patterns. I've blogged about it in more detail over on the Sew Make Believe blog so I'll try not to repeat myself too much here! I bought some lovely turquoise cotton from Royal Fabrics in Leamington and decided to make the contrasting facing and collar detail out of some of the fabric I bought when Nic and I were in Paris in June. Cutting the pattern pieces out took a bit of time, but satisfyingly enough the dress itself came together quickly on a wet Wednesday afternoon, in time for me to wear it to the Sew Make Believe button necklace workshop that evening: 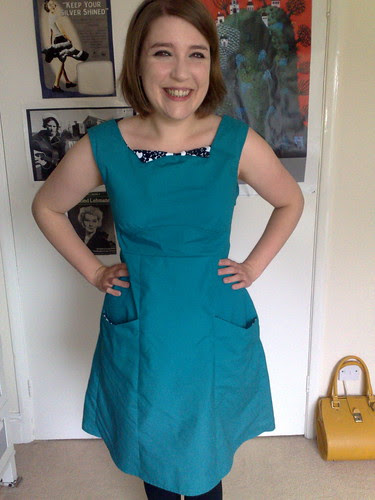 Like the Ceylon dress, this one was very enjoyable to sew and I'm really looking forward to making it again. I think I could stand to make it a size smaller, which is what I'll do. The turquoise one fits grand, and I am really happy with it, but I really like the idea of making a more fitted version of this for the colder weather. Unsurprisingly, I'm thinking of making it in deep red...at least it will feel at home with all of my other red clothes, I suppose! I've bought a few more Colette patterns from Sewbox, the rather lovely Macaron: 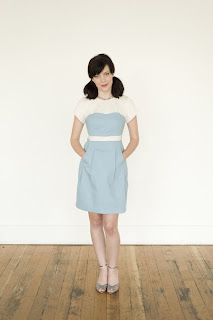 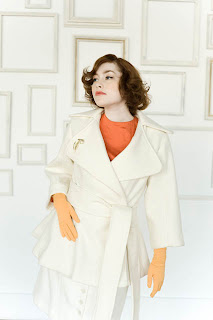 I don't really need another coat, but I love the way this one looks. Also, I'm thinking that it will be a good way to learn new sewing skills, especially as I will have the help of a whole bunch of other seamstresses - I'm going to (attempt to) participate in the Lady Grey sewalong over at Gertie's Blog for Better Sewing so if I come unstuck in matters such as choosing lining fabric etc, I'll have the exploits of other sewists to call on for inspiration.

Despite the nasty weather, I was really looking forward to getting away and spending some time by the sea. Nic and I had planned to spend the bank holiday weekend with his parents in Kent, so on Friday we took ourselves down there. We had a horrible journey between here and London, but once we were on the high speed train out of St Pancras it was all good. We got down a bit later than we had intended, but in good enough time to go out for a walk on the seafront and for a few drinks with Nic's brother Dom. We got to bed early after an episode of Kojak ready for an early start the following day.

Nic had found that the library at the University of Kent in Canterbury had some documents he needed on microfilm, so as we were down that way we took a little research trip out to the campus. The campus is up on the hill above Canterbury and is a delight of 60s architecture (just like the campus of my alma mater) and there was something a bit eerie about being on a practically deserted campus out of term time. The library was nice, and using the microfilm was really cool - it made us both feel a little bit like Mulder and Scully! Most importantly, it was a useful trip. We walked down into Canterbury, along some mysterious woodland paths and through some residential areas, ending up along the river: 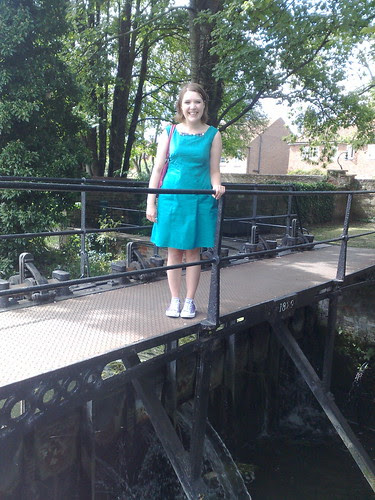 The sun was shining and Canterbury was really busy. It's such a pretty town, but I wasn't really feeling in the mood for crowds so after lunch we headed over towards the bus station so we could go and visit Nic's grandparents in Dover. We had just missed a bus, so killed some time in Fenwicks by messing around and trying on clothes: 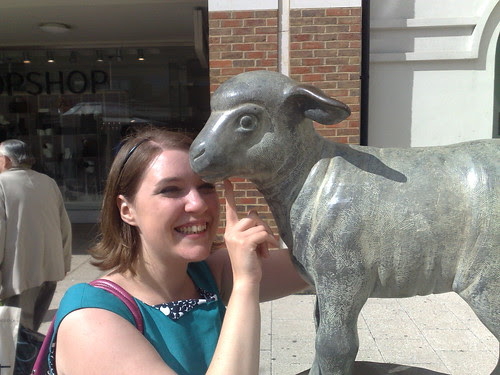 I quite fell for this bright yellow coat from Benneton, despite its very impractical
colour

We spent a wonderful afternoon with Nic's grandparents before heading back to Sandgate for the evening. The Sandgate Festival was on over the weekend, and we'd had such a good time there last year that we were really looking forward to repeating it this year. The lovely Dan and Vic came over to spend the evening with us, and we were joined also by Dom and his lady M but our plans to watch the fireworks by a fire on the beach were scuppered by rain, and so instead we retired to the pub and spent the evening there. It wasn't quite what we had planned, but it was a really good evening all the same.

Sunday was very quiet and relaxed and on Monday the sun came out again, so Nic and I decided to make the most of our last full day by the sea. We walked along the seafront from Sandgate to Folkestone, stopping for a paddle and a look in the rock pools: 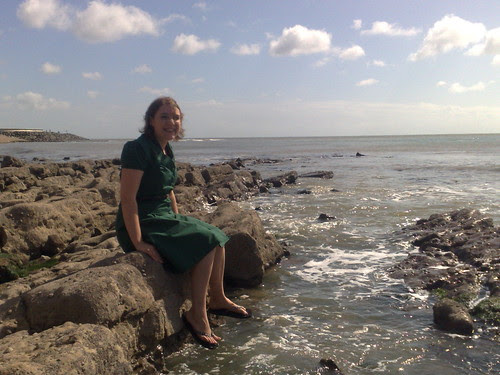 As we got closer to Folkestone we realised that the Leas Lift was back in operation so we were able to take it up to the top of the Leas. It's a water powered funicular railway, and it had been closed down some time back so I was very excited to see it up and running once again! It's a very short journey up to the top, but worth the experience of hearing the water and being able to look out to sea. Once again, we met up with Dan and Vic and spent a really pleasant afternoon pottering around Folkestone. Our plan to have tea at the Grand Hotel didn't come to pass due to there being a large vintage rally going on outside, but this turned out to be really good fun anyway. I found Morse's car (or at least, one very similar to it) 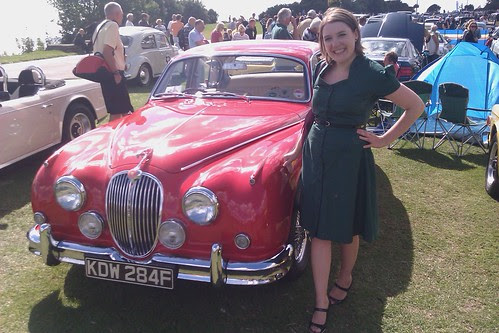 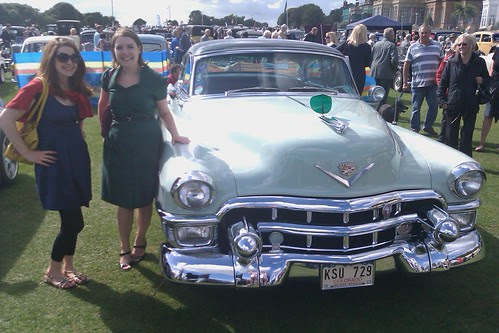 I was too busy posing on this bus to be much good as a clippie, as you can see I let this young man on without a ticket...

We finished our afternoon in Folkestone with an ice-cream in the sunshine, another ride on the Leas lift and the walk back along the seafront to Sandgate. It was such a gorgeous way to spend the bank holiday!

Nic and Dom enjoying the sunshine 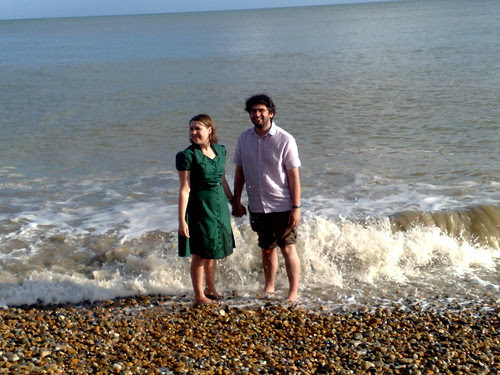 My dress got really wet because of the big waves...but thankfully it dried quickly!

Yesterday we decided to break up our journey by stopping in London. Nic bought some comics but this time I didn't buy anything from the Fever shop, which is most unlike me! I was much too hot and sweaty from being on the tube to feel much like trying on the dresses, I think. We had some much needed refreshments in the teashop at the LRB, including some truly delicious rhubarb cake: 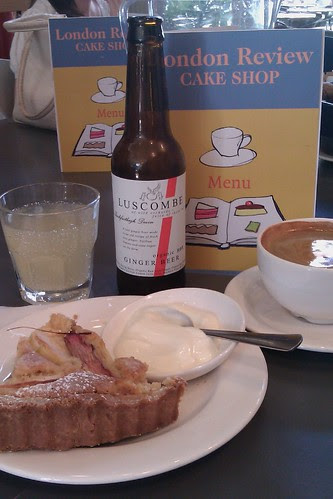 And, I'm going to include this picture for no reason other than it really made me laugh: 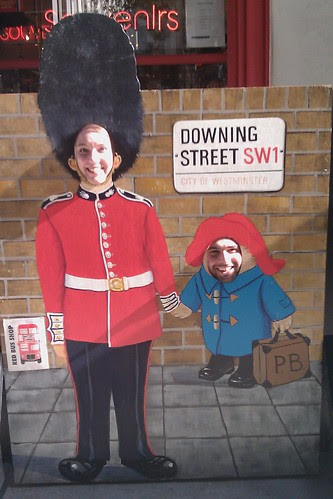 I'm back to work tomorrow so today Nic and I have just been lazily enjoying the sunshine... I'm just about to have a cup of tea and a snack and then we're off out for a walk to the Saxon Mill. I'll just leave you with a few photos from this morning, as Leamington is so pretty in the sunshine: 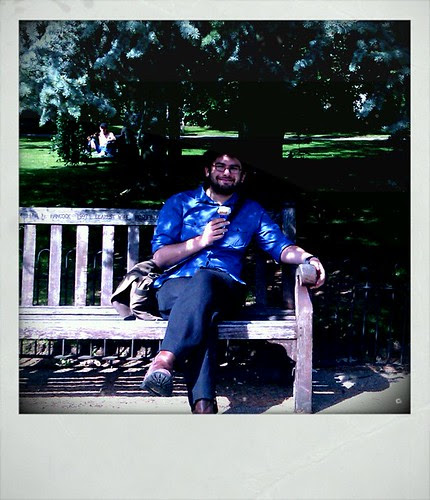