What did he ever do? He knocked you up twice and took the garbage out on Thursdays. You wanna erect a statue?

So, it snowed last night. I love it when you go to bed and there's no snow, but you wake up to a snowy morning. Well, I normally love it. This morning the experience was somewhat marred by the fact that I was woken up by some bratty children on our street having a snowball fight at SEVEN IN THE MORNING. I am such a crank, but they were really noisy. It was almost worse than being woken up by my alarm.
But still, the snow was pretty fun and it contributed to my overall festive mood, which was nice. And being (rudely) awoken earlier than normal on a Saturday has its benefits too. Nic brought me a cup of tea and we lay in bed and read and lounged around, and when we got up it was still really early. So today actually feels really long because we've had a lovely day, and it's still only 6 o'clock.
After a bit of pottering around and a very tasty breakfast of coffee and toast with Mr Choc (Lidl's own brand alternative to a well-known hazelnut chocolate spread. It's just as tasty and comes in an enormous jar) Nic and I got ourselves dressed and headed into town to do a bit of grocery shopping and have a tramp in the snow. I decided to wear my new dress, which is wool: 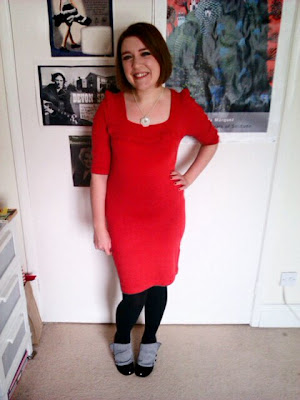 Fever Robin dress and Irregular Choice Flick Flack shoes
I bought this dress online the other evening after a particularly tiring day. I'm clearly an emotional shopper. I like it a lot - the neckline is fun, it's pretty cosy and it's much slinkier than I thought it would be. I didn't wear these shoes to do the grocery shopping but I did wear them a little bit later. I wore another one of the treats I got from my Aspire goody bag - this necklace: 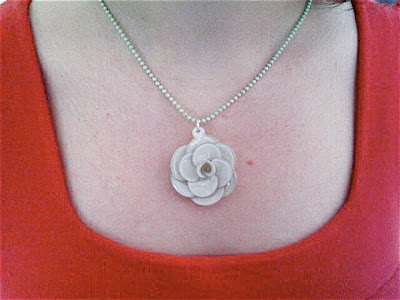 And I topped it all off with this adorable red cloche hat that Nic bought me in Oxfam one day last year: 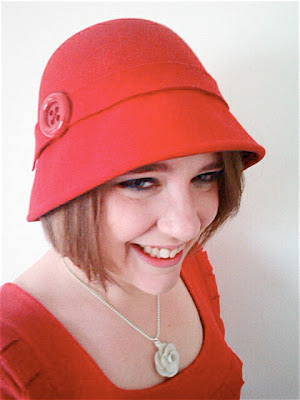 Cloche indoors. It looks like I took this photo myself, but I didn't. I'm not that co-ordinated. 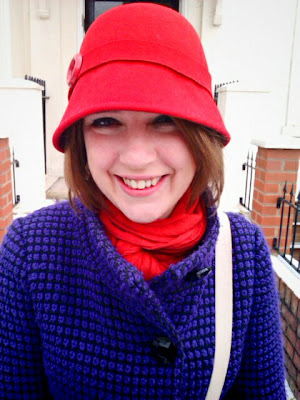 I like red and purple together. Nic bought me the red scarf in Stratford a few years ago, and I'm wearing my Ruby Belle Rosy coat
Nic and I went for a walk in town and dropped by the Handmade Gift Fair that was being held in the Town Hall. There were some good sellers and it was nice and busy but the tables were a bit too close together for us to be able to browse comfortably. I stopped to chat with Denise from Peeko, who was selling some of her handmade jewellery and accessories. She kindly agreed to pose for a little outfit shot:

Denise, in a rather fetching green dress from Phase Eight
I couldn't resist buying one of her gorgeous hats: 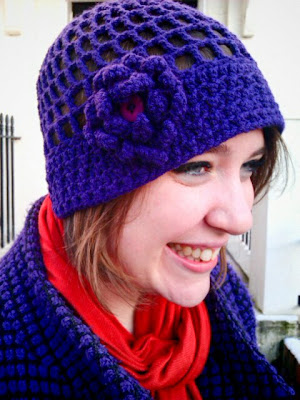 Look at the pink button in the middle of the flower, how cute is that?!
After a short browse around the farmer's market in the Pump Room Gardens (not very inspiring for vegetarians, but probably great if you eat meat) we took a turn through beautiful Jephson Gardens and I took the obligatory Look! It's Snowing! photos: 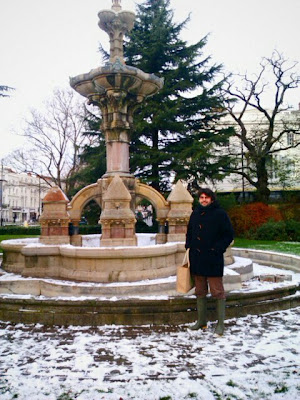 Nic was suitably attired in his wellies 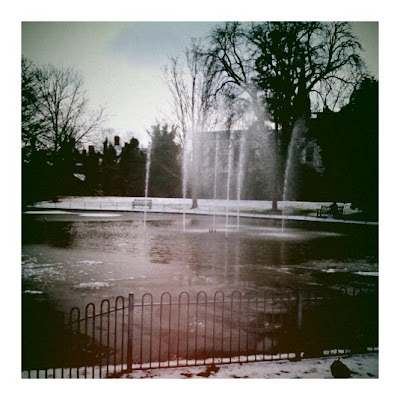 After finishing our grocery shopping we had a quick cup of tea at home, and headed out to the cinema. Well, it's around the corner so 'headed out' seems a bit of an overstatement, there! Anyway, we went to see Megamind, which was our first foray into 3D. I really enjoyed the film, and although I found the idea of wearing another pair of glasses over the top of my own glasses a bit weird it wasn't too much of a problem. I have to admit that the appeal of 3D is a bit lost on me - I can't see that I would have enjoyed this film any less in 2D. Still, it was good to go to the cinema with my honey. It's actually the second time this week I've been to the cinema (almost unprecedented for me, despite my degree in film studies) as Lauren and I saw Harry Potter and The Deathly Hallows together on Wednesday night. Again, I can't see that I would have enjoyed that any more in 3D but maybe I'm just a big old grumpybum about new technology! I'm certainly a grumpybum about films - the trailers before Megamind reminded me why I so rarely go to the cinema. Gulliver's Travels with Jack Black? Well, I like Jack Black, but damned if I'm going to pay £10 to see a film starring Billy Connolly and Catherine Tate (officially the Doctor's Most Annoying Companion. And I'm including Adric and even Turlough in that. And maybe even Bonnie Langford) Also, the weird film of Rapunzel, Tangled, also looks pretty sucky. But I liked the cutouts in the cinema foyer: 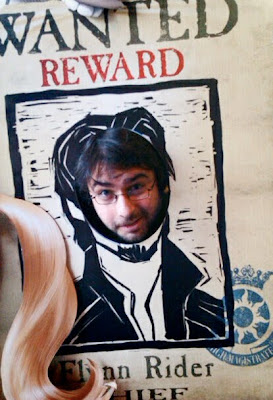 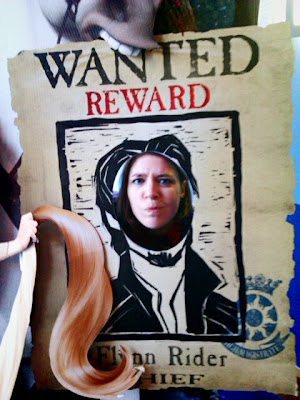 Anyway, the rest of Saturday is going to be pretty chilled - dinner, some wine, some records and some smooches. It sounds good, doesn't it?!
I do have some other stuff to tell you all about my week, and about work (and about my delightful angry colleague) but I'm going to do that tomorrow. In the meantime, can I ask your advice? Should I buy this? 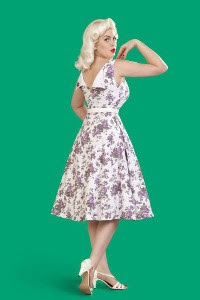 The case against: Erm...well, I have a lot of dresses
The case for it: It's so pretty! And it's on sale!
The case against: I have already bought a dress this week, and it's nearly payday.
The case for: It's nearly payday?
And finally, the gorgeous Fi and Amber are taking part in Dressember, which is a challenge to wear a dress every day in December, and to blog it. Well, I'm not on Facebook and I wear a dress every day anyway but you should follow their progress, and head over and check out the Facebook group if it's something you fancy doing yourself.
Until tomorrow, my pretties!
Posted by Roisin Muldoon