I surely am not unfond of you, Peggy, I tell you what.

Evening all. I hope you're all well on this chilly February evening. Nic and I are curled up, watching an absolutely cracking episode of Lois and Clark: The New Adventures of Superman. It started with Lex Luthor pretending to be Superman in a virtual reality game. His costume even says LEX on the front, just like his skyscraper. It is so cool. Also, James Earl Jones is in this episode, so that's also pretty hilarious.

It's been a very cool weekend. On Friday night, Lauren, Tom, Paul and Viv came round so we could watch the second X-Files movie and eat enchiladas. The company was excellent, and so was the wine and the food (especially the amazing peanut butter swirl that Lauren kindly made for us). This was a good thing, because the film? To say that the film sucked would be doing an injustice to all those other films that have sucked. It was really good to watch it in the company of sceptical friends, and under the influence of alcohol. If you need a quick precis of what made the film suck so much, I'll provide one for you:
So, you know, alcohol was necessary. Still, we had a very enjoyable evening. The only way to watch a bad film is to watch it with friends.
I was up bright and early on Saturday morning to go to the RSC costume sale with Lysy. We didn't end up going to the sale - when we got there and saw the length of the queue we both thought we'd rather go and have a cup of tea, so that's what we did. There are few things that I would stand in a queue for, maybe a red cross package in the event of some sort of public disaster, but not old theatre costumes. Lysy and I had a really lovely morning. We lingered over breakfast in McKechnies, had a browse around Aspire and the charity shops and I bought Nic some cheese in Paxton and Whitfield before coming home to have lunch with our boys. After that I got into bed with my book to spend a very lazy afternoon. It was the perfect way to spend Saturday. The sun had come out so I was able to dress in a more Spring-like fashion:

Self-made Simplicity 2591 and Irregular Choice Oz shoes
I plan to make myself another dress from this Simplicity pattern because I love the shape of it so much. You can't see in this photo but it also has pockets! These shoes are the same shape as the No Place Like Home shoes I wore last week and they provoke much the same reaction. Lysy was really amused by how many times someone stopped me to comment on them. They are pretty unusual, to be fair. I had a very scary moment when I caught the heel of one in a wonky paving stone and the heel tip pulled off, but luckily enough none of the dowels holding it in place had broken so I was able to just tap it back into place. Still, though, it was a bit of a spooky moment for me. Otherwise I really enjoyed my morning in Stratford. I think it's nicer on a cold day as it isn't quite as full of tourists. There is always something unusual to see and this time around was no different - outside the Shakespeare birthplace a man was selling fresh milk straight from the cow. The cow was called Mabel and she was lovely, but the strange thing wasn't the cow, it was the person standing next to it dressed as a cow. Also, I met this little fella outside a department store: 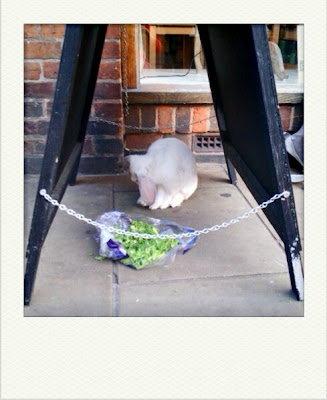 He managed to turn his head at the last minute, but how cute is this little rabbit?! He belonged to a street artist who was working nearby, and he was just hopping around without a care in the world.

Nic and I have been having a quiet day today and although it's gone a bit cold again I decided to pack away some of my heavier winter clothes, and to get some of my spring clothes out. Just doing that made me feel very cheerful, even if it is still a bit too cold to wear some of them. I thought I'd wear a dress that is spring-like but still warm:

Bettie Page Jazmin dress, Bertie Sardinia shoes and my Joules bag
The belt has been getting much more play than the dress, but I do love this dress. I was shivering on the doorstep here too, and rushed to put my cardigan and coat on after this photo was taken! Nic and I did our grocery shopping, brought some DVD boxed sets into CEX to exchange and had a browse around the shops. I thought I might buy us The Wire season 3 on DVD as we have been rewatching them. They didn't have a copy in either CEX or Fopp, but HMV did. Would you like to know how much they were charging for this boxed set? £53. It isn't out of print, or hard to find, or anything. In fact, this was the price they had on all of the individual season boxed sets. It's scandalous, and it's stupid too. On their website the entire 5 season boxed set can be bought for £58, and the single seasons for £17. It's no wonder that shitty chain is struggling to stay afloat with that sort of pricing. There's just no way they can justify that price, and I struggle to think of anyone who would pay it. So fuck you, HMV. Maybe if your shitty store closes some independents might have a chance.

Hey, that made me feel a bit rage-y. Sorry about that! Nic and I are going to have a lovely evening in with a vegetarian roast dinner, some wine and maybe a film. I'm on leave tomorrow and while we won't do anything specially for Valentine's Day it will be really nice to spend the day together. I will be back tomorrow with my first Shoe Challenge post, though, so I'll see you all then.
Posted by Roisin Muldoon