But eventually, I got out of his headlock. And where are you now, Father Eamon Hunter?

Evening all, my dearies. A reasonably rare midweek blog post here, because I'm trying to be a better blogger and blog more regularly. What a treat for you all, eh? I'm actually not feeling too clever today, and stayed home from work feeling under the weather. I watched Frasier and drank mint tea like it was going out of fashion while Nic worked at the table. The glamorous life, what do you think? I'm actually feeling a lot better now, and hopefully well enough to go out for a walk in the evening sunshine. I did even take an outfit shot for today (to show off the excellent dress I bought for 99p on ebay last week) but the photos are so dreadful. I mean, I'm happy enough to shed my vanity for the love of blogging and all, but my eyes are closed, my hair is in my face. No. Y'all will have to wait for another opportunity to see that frock.

Being as I've had a quiet day I don't have too much to share with you all apart from my new shoes! Well, not quite new - they were a gift from a friend who found that she didn't wear them. She decided to pass them on to me: 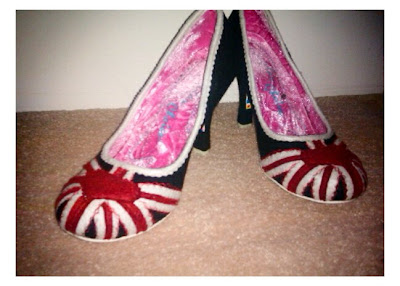 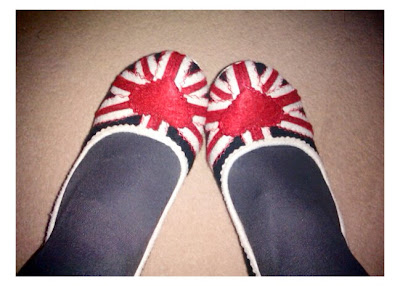 Of course, I'm pleased as punch at having been given a pretty pair of shoes. Naturally I'm already dreaming of all the things I can wear them with. That said, I might not have bought these for myself, and I wouldn't bring them home to Northern Ireland. I've lived in England for nearly ten years now, and obviously here the union flag has different connotations. I grew up on the Catholic side of things in Northern Ireland, however, so the union flag means something very different to me. My family didn't have strong political views, and neither do I, on the political situation at home. I'm not really a Catholic, far less a nationalist. Still, a part of me can't help but look at the union flag and see it as a statement of a political view. It's the same as when I wear my bowler hat. I like it, but I wouldn't wear it at home - too many thoughts of the Orange Order and sectarian hostility. Things have changed a lot at home, and the current civil disturbances in Belfast are the works now of a few hateful extremists rather than a coherent paramilitary organisation. Anyway, I don't have much more to say on the subject, just that it struck me that I'll happily wear these in Leamington. I just wouldn't find them appropriate in Dungannon, even if no one else was fussed by them.

Anyhow, dinner is ready and Nic has cued up an episode of New Tricks for me. More later in the week, but good solstice to you all.
Posted by Roisin Muldoon