They have no morals, and no respect for human life. But what they do have is the finest collection of boilers in the world. I include Canada in that.

Hello peeps, what's the haps? I'm one tired and happy Dolly this afternoon, after a most refreshing weekend of socialising. For the most part, last week was highly meh. Those of you who know me in real life or follow me on twitter will have heard me moaning about all the printing I had to do, which was incredibly boring. Still, I came to work prepared with my book and on Monday while printing about approximately twelfty three bajillion scripts I managed to read lots, so it wasn't all bad. I really should quit my jibba-jabba though, because lots of nice things did happen also. Nic started a new job on Monday, which was initially meant to be one day a week but which has expanded to two. On Wednesday evening Zoe taught us how to do traditional hexagon patchwork at Sew Make Believe which gave me the skills and the enthusiasm to start working on a quilt as a gift for someone. So that was awesome, and just the antidote to the tedium of work.

On Thursday night, Nic and I had planned to go and see the amazing Devon Sproule, who was playing in Coventry. The gig was scheduled to be held in a beautiful church, but there was a fairly last-minute venue change to an absolute shithole, so regretfully I got a refund on the tickets and we decided to have an evening out with Tom instead. Ever the classy pair, we had dinner in Wetherspoon's (curry club FTW) and were then joined by Tom. We got soaked on our walk to the pub but good old Nic got a few outfit shots of me earlier that afternoon:

In the rain outside the Old Library. Emily and Fin Lucy dress, Fever Valentina jacket and yellow wedges from Next

This dress came from ebay and I bought it thinking it was navy with yellow flowers - I suppose it can be hard to gauge colour from photographs. I wasn't disappointed or anything, although I do generally try to avoid wearing black clothes. Mind you, I don't think that many people look at the dress and see black because all day long I had people telling me how summery I looked. Which, fair enough, but it is summer! So, I don't really get why people found it surprising. Anyway, I am pleased with the frock, and with the jacket which was also from ebay.

I suppose it is quite summery, now that I look at it...

I was working from home on Friday and the miserable grey weather made me feel a bit grumpy, but I was much cheered in the afternoon by a coffee with some friends and a bit of a gossip and some cannoli, before coming home to have dinner with Nic and watch Case Histories on the BBC iplayer, a nice quiet Friday evening in.

Yesterday and today was the annual Leamington Peace Festival, a free festival held in the Pump Room Gardens. I love the peace festival, which is usually very chilled out and fun, with lots of interesting stalls and fun bands. It was looking like the rain was going to make this year's festival a bit miserable but Nic and I headed down early on Saturday anyway to catch up with some friends. It did rain, but in between the rain the sunshine was beautiful and there was lots to look at and do, as well as the fun of running into friends. After wandering around the stalls and getting some wonderful food (all of the food stalls at the peace festival are vegetarian) we found a dry spot of ground down by the main stage and sat down to enjoy some of the bands, even having a bit of a dance before heading back up to our flat to have dinner. On Saturday evening we had some friends over for drinks, which was a a wonderful way to end the evening. We had bubbly, crisps, beer, cake and cheese - what could be better?! I was somewhat immoderate in my drinking, and was expecting a horrible hangover this morning, but was thankfully spared that. The very large mug of coffee and the cooked breakfast I had probably helped, as did the epic sleep. The sun had come out, so we toddled down with a blanket and a flask of coffee and some leftover cake and wine to meet Louise, her husband, and their two gorgeous doggies. There isn't much to say about the rest of the day, as we passed the time chatting and giggling, playing with the dogs, seeing friends and listening to the music. It was honestly one of the most relaxing and fun weekends I have had for ages. I'm back up in our flat now with a cup of tea and although I'm tired, I feel refreshed for the week ahead. I love weekends like this! I'll leave you with a few photos from yesterday and today, and I'll catch you all later in the week. 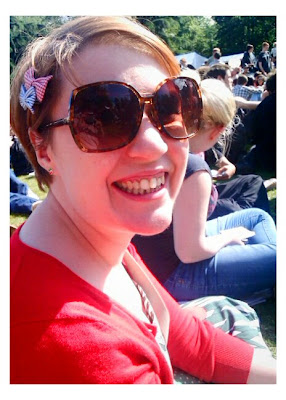 Enjoying the sunshine between the rain showers on Saturday 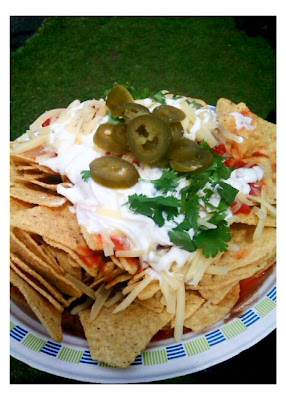 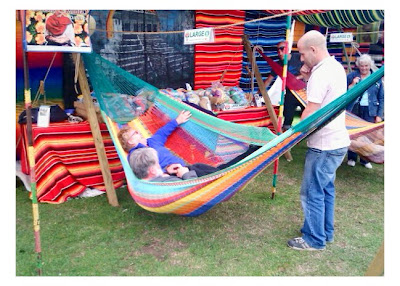 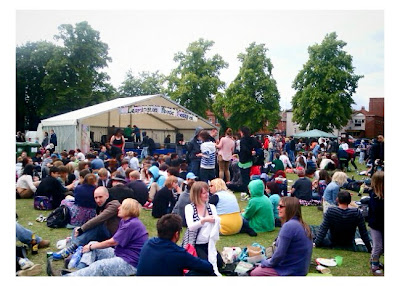 The main stage. Who knew Leamington had so many hippies?!

Making a tit of myself, dancing to a ska band. I'm wearing my curtains Simplicity 2591 and Irregular Choice Oz heels

Another tit moment, and doesn't the man behind me look like Nick Hewer?!

Nic with Alfie, the greediest doggy in the Western Hemisphere

Me with Prudence the Airedale terrier.

Now, where is that leftover cake?
Posted by Roisin Muldoon