It's not like there was the Lone Ranger and Tonto and Bonto.

You guys, what is UP?! I know there have been tumbleweeds and all blowing around the blog, here. I respect y'all for sticking with me. I had very sporadic computer access last week when I was at home, and for most of the week I was either asleep, reading or playing The Legend of Zelda: The Phantom Hourglass on my mum's Nintendo DS. What can I say? It rains A LOT in Northern Ireland. I did have an excellent week, however. It was really nice to be home, despite the utterly dismal weather. And playing all those hours of Zelda brought back many happy memories of becoming totally addicted to The Legend of Zelda: Link's Awakening on my gameboy back in the day. Sigh. I need to get myself some kind of computer game.

Anyhoo. I won't bore you all with every single detail of my week at home. I really didn't do very much other than the things I've just mentioned, and a little bit of shopping. In fact, I had one majorly successful shopping trip to Craigavon shopping centre (dizzy heights!) with my parents in which I bought a dress I'd been after (but unable to buy online) the elusive green cardigan and yellow belt I've been looking for, and a nice blue cardigan as well. I also did a lot of window shopping with my sister, and accidentally (drunkenly) bought a dress from a friend. I have no self control. But then, you all knew that.

On the Wednesday of my visit home I hopped on the bus down to Belfast (cheaply thanks to Ulsterbus and their 'summer rambler ticket') to meet up with two dear friends, Roseability and Clarabelle. We had an accidentally cheap lunch at a well known chain of pizza restaurants (they brought us the wrong bill) and then spent the afternoon drinking outside in the drizzle at a fabulous bar called Muriel's. It's on Church Lane (opposite the side of the In Stores) if you're in the Belfast area, and it's worth a visit. We had a canopy to shelter us from the drizzle and lots and lots of Sauvignon Blanc. Apparently the eponymous Muriel was a lady of ill-repute, running a hat shop on the ground floor and a knocking shop on the first floor. The bar is decorated accordingly. I didn't have my camera with me, so I only have grainy vignette snaps, but it is a really lovely bar with friendly staff and well worth a visit. It felt very decadent to be lushing it up with two beautiful ladies, it was an excellent day. 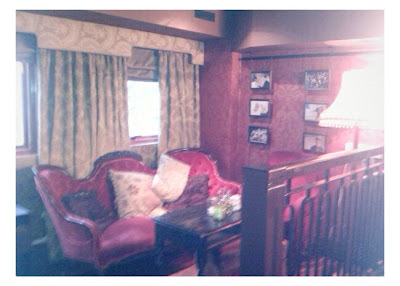 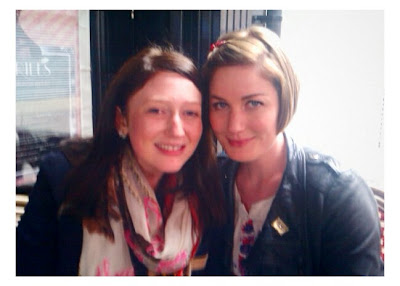 Beautiful ladies
I've known these two ladies for most of my life, and it's always a joy to see them. Of course our many (many many many) glasses of wine helped us to put the world to rights and it's always good to catch up on the gossip too. It was totally worth the hangover the next day.

I've got a few photos from the week that I'll share with you guys. These are dog heavy, because the dog kind of pushes herself into the foreground. 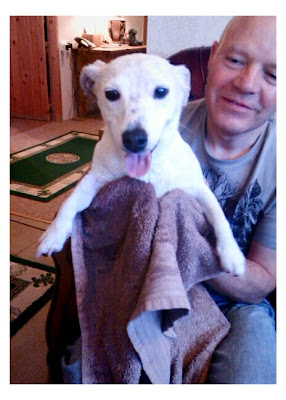 My first night at home. The dog had just had a shower. I know. 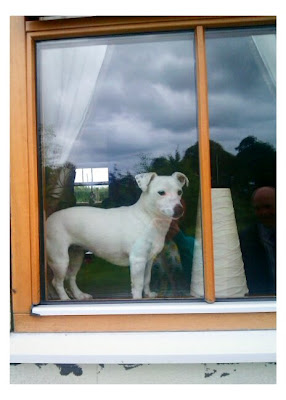 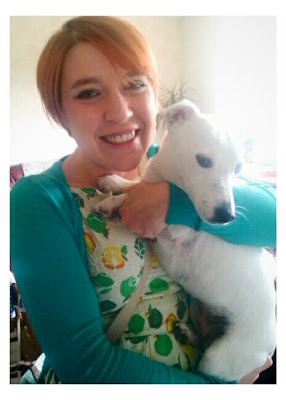 I swear this is the last one of the dog. 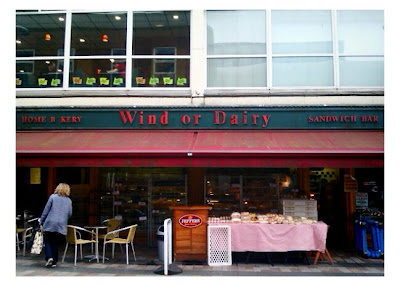 This is a cafe in Belfast. I stood for about ten minutes trying to figure out what the name meant, before I figured out the missing letter. I am so lame. Wind OR Dairy? 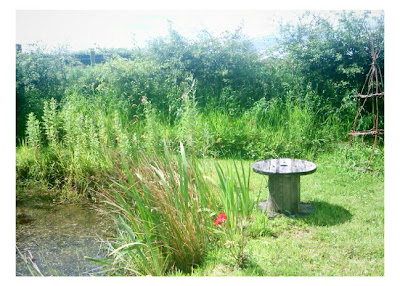 The pond in my parents' garden 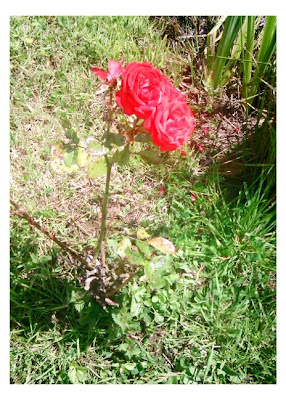 Yeah, it's just a pretty flower. Pretty though, isn't it?! 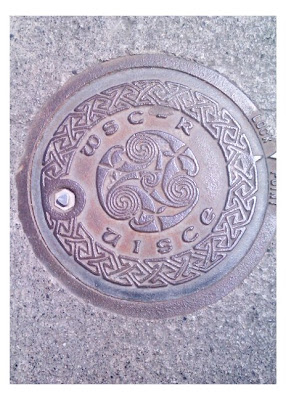 Manhole cover in Drogheda - no reason for this one, but isn't it nice?

Oh, but I do have one totally mad story to share with you. I can't find evidence of this elsewhere on the internet to back it up, but I have been assured that it is true! One of my mental uncles (one of the ones we don't talk to because he's an asshole) was BURIED ALIVE FOR CHARITY. Guys, I'm sorry about the capital letters but seriously. BURIED ALIVE. Apparently it was to raise money for the local gaelic football team and youth club. So, you can see the thinking there, right? No? Me neither. A cousin who is an undertaker supplied the coffin (which had a tube for air, I guess) and led the funeral procession, there was a funeral mass and my uncle's wife and friends pretended to be in mourning for the two days he was buried alive. You could not make this shit up. I don't know how much money he raised. I don't even care because he's an asshole.

Anyway. Yeah. So that happened. But the rest of the week was lovely, and it was really nice to get back to Leamington on Saturday. Nic was waiting for me at the airport and he'd cooked me dinner and it was just so nice to sleep in my own bed (my bed at my parents' house is too soft because it has about three mattresses on it!) And the sun came out on Sunday, which was also lovely. I had a long lie in, read some of my book, and then Nic and I went out for a wander in the sunshine and to forage for blackberries.

Nic was very pleased with his crop. He was thinking of the apple and blackberry crumble he was going to have later

Me outside The Talbot. I'm wearing my Fever Tulip Ruffle dress and birkenstocks

Going back to work on Monday kind of (totally) sucked. Especially as Monday starts with an utterly soul-destroying meeting in which someone usually says something pissy which makes me feel depressed. So, yeah. Today was better though, marginally, because we had an office party in the afternoon. So free wine helped dull the pain, and running into the gorgeous Louise on my way home made the afternoon unexpectedly excellent.

Yeah. I caved in and bought this in the Fever sale, and it arrived just before I went home. So I've already worn it lots - and having worn it to work it's a wee bit wrinkly in this photo, and I'm a wee bit wine-wrinkled my own self. But what are you going to do?!

Right, I'm off. Nic is just about to serve me up my dinner (veggie sausages and mash - yum!) I'll be back soon though. Honest.
Posted by Roisin Muldoon