Last time you were so engrossed, it turned out you were reading the "Adult Video News."

Hello my darlings! Wow, this has been a busy week. One where I kept meaning to take photographs and write and all, but instead found myself doing other, sometimes less interesting thing. As I overheard a young man say to an elderly lady after he'd hit her with a football he'd been booting around the park, "soz".

It has been a good week, however. After all my bitching and whining last week, this week came up trumps. Don't you love it when that happens?! Work has finally started to get a little bit more interesting, which is a blessing. I'm starting to go a bit mad with boredom, pushing spreadsheets around. Nic was away on Tuesday evening and I had to work quite late, so instead of having dinner I went out with two of my colleagues and drank a bottle of wine and ate some cake. It was lots of fun - for one thing, the cake was very good (mint chocolate cheesecake) and the wine was surprisingly tasty. I don't normally drink red wine, and I didn't order it myself, but that bottle of house Merlot was rather nice. Sometimes it's good to be a pleb, eh? I got home and was just tipsy enough to want to watch an episode of The Kennedys on the BBC iplayer. Man, it was disappointing. I was hoping for so bad it's good - and the utterly bonkers title sequence seemed to promise that - but it was just totally boring. The performances are inexplicable too. I'm no great fan of Tom Wilkinson (I know, shhhhhh!) and it seems he's playing Joe Kennedy as Hannibal Lecter. Katie Holmes is even more mad, sadly. Her attempt at Jacqueline Kennedy's accent makes her sound like she came from Brooklyn or something. So, I sleepily switched it off after having been bored for 20 minutes.

I had Wednesday off work and had a fairly leisurely start to the morning before catching the train down to London. To my delight, the train itself was one of the former Wrexham and Shropshire trains, so my journey felt unusually luxurious! To my additional delight, I did NOT have a hangover. Win! I pottered around a bit in central London, bought myself a dress from Fever before meeting Nic in the Chandos off Trafalgar Square. We had lunch in Soho, I bought another dress (from a fabulous tiny little boutique called Zegerman and Lusky on Greek Street) and we wandered over to Bloomsbury. The sun was shining and the day felt like a holiday. While Nic browsed the comics in Gosh, I had homemade lemonade and scones in Tea and Tattle, underneath Arthur Probstrain's Oriental bookshop. It was GOOOOOOOOD. The scone came with raspberry and vanilla jam and lots and lots of clotted cream. Bliss. 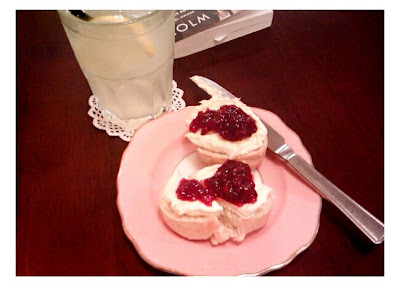 
The reason I was in London was to meet up with Adlina and her husband Eizwan, as they were briefly over in the UK. Adlina and I haven't seen one another since we graduated, but thanks to Twitter we've been able to stay in touch. It was so much fun to catch up with her and the hours sped by. It was really late by the time we got back to Leamington but it was amazing how one day felt like a whole holiday.

I wasn't in the office on Thursday or Friday so not too much to report from those days, I'm afraid. I hardly left the house, because I was working and sewing and also I'm quite bad at leaving the house unless I absolutely have to. I did have the pleasure of running into the lovely Louise and her mum while out shopping, though, and it was excellent to see her beautiful new haircut in real life! In fact, I recognised her haircut first. This is what happens when your friends blog! Both Nic and I were feeling a bit stressy on Friday afternoon (I kicked the drying rack. Enough said, really) so we decided to go out for a bit of a walk in the last of the sunshine. It's amazing how that can always make me feel more cheerful. We ambled down through Victoria Park and then did a bit of grocery shopping. I love Victoria Park, it's one of the bits of Leamington that I never knew existed until I moved here. There's a walk by the river, a bowling green, a play area and even a strange little paddling pool. On Friday evening it had been filled and the water was just too tempting: 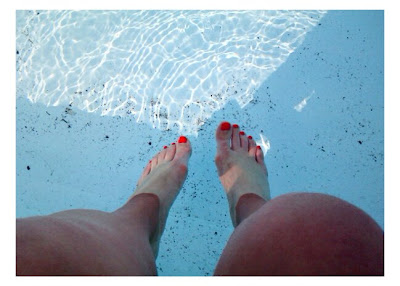 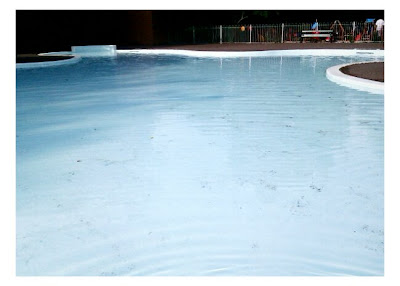 It's only about 6 inches deep but the sound of the water and the feeling of it around my feet completely changed Friday afternoon for me.

You can see here how happy I felt! This is one of the dresses I bought in London, from that little boutique in Soho. It's a Get Cutie dress, but it was heavily discounted. I've always loved the look of their frocks but balked a little at the price - this style would cost £110 at full price and while I admit that the fabric itself wouldn't have come cheap, I can't see that I'd be getting my money's worth at that price. Maybe it's since I took up sewing for myself that I'm more discerning, I don't know. I do know that I wouldn't be happy paying that amount of money for a frock that had the zip tape still sticking out the top at the armhole, which mine had. I also had to alter the neckline. I mean, I'm not Lolo Ferarri but I could have been in this dress. Anyway, that's enough moaning because the dress is really rather lovely and quite a bargain too:

Get Cutie dress in Alexander Henry 'From the hip' fabric, and Irregular Choice Mermaid shoes

I've liked this Alexander Henry fabric for ages. Pinup cowgirls, what's not to love?! I'll probably buy some at some point to make myself a frock, but this one will do in the meantime. I love how sassy these girls are:

I was feeling pretty dodgy on Saturday, perhaps a bit hungover (although how, after only two glasses of wine) but with a pounding headache that made me miserable for most of the day. Luckily I had Nic around to look after me, because I was a bit of a sad panda. Dinner and some paracetamol got me upright enough to have a few drinks (just pop for me) in the gorgeous garden of the New Inn with Greg and Paul. Sadly I didn't get any photos of how lovely the garden is, or of the amazing great dane named Ziggy that was wandering around it, but Nic did get a photo of me on the way there:

It was such a lovely, chilled, funny evening made perfect by the chips we ate once we got home. Even when I haven't been drinking, going to the pub makes me want to eat chips. Yes, I am THAT classy.

Today has been similarly quiet, highlights including a game of badminton in the park with Nic. I mean, if you can call it badminton. Really, it was more just me and Nic dicking around with a cheap set we bought in The Works, but it was lots of fun:

I could never be a really cool fashion blogger, I look like such a tit in this photo. Also check out my Deirdre Barlow neck. NICE. It was lots of fun, though. Oh, and I took my shoes off to play properly! I'm wearing the Fever Atlantis dress, a bolero from Phase Eight, and Bertie shoes.

Nic and I did some housework, bought some groceries and had a very domesticated afternoon. Nothing at all exciting to report! So, I'm going to motor on. Nic and I have the last episode of the rather silly Scott and Bailey to watch, some maltesers hot chocolate to drink (I suspect it might taste like Horlicks, but I will report back) and then it's bedtime. I lead such an interesting life! I do actually have lots of, y'know, really deep thoughts to share with y'all, but I'll do that in the week. Have a good evening, my loves.
Posted by Roisin Muldoon