I sing in the shower. Sometimes I spend too much time volunteering. Occasionally I'll hit somebody with my car. So sue me!

Hello my loves! Well, this week got away from me somewhat. It's been a busy one, one of those when you can't quite believe it's already Friday. Not that I'm complaining, or anything. But if you've been feeling neglected, it hasn't been intentional, I swear!

So, where did we leave off? On Friday afternoon I went along to a wine focus group. It was pretty cool. What I know about wine could fill up a thimble, but the wine shop is nice and I figured that I couldn't turn my nose up at free wine. The deal was you turn up, you fill out a questionnaire, you try some wines. The questions weren't about the wine itself, but about the packaging, so I felt a bit more confident on that front. Once we'd filled out our forms, we got down to the more serious business of tasting the wines. 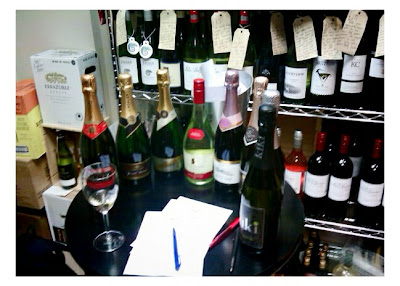 The wines we were discussing


The wines we were tasting were pretty good, too. There were two reds, two whites and a sparkling wine. The whites were excellent - two different Sauvignon Blancs, both very different and both delicious. I'm not a red wine drinker at all, and I was surprised by how much I enjoyed both of the red wines. There was a really light and fruity Cabernet Sauvignon, which the wine lady suggested would be nice a little bit chilled. The other was a Syrah and as I'm not much of a wine drinker I couldn't fairly describe it without resorting to cliches, so I won't. But it was bloody delicious, and it was only an attempt at fiscal prudence that stopped me from leaving the shop with a bottle of it. All in all, it was a thoroughly satisfying way to pass a sunny Friday afternoon. 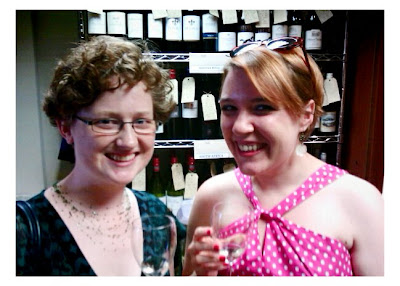 Denise and I, enjoying the sweet sweet taste of free wine

The afternoon drinking left me feeling rather sleepy so, although Nic and I had a date at the pub to fare Lauren well on her travels, we stayed for one and had an early night. I was up bright and early on Saturday morning to join Lysy on a jaunt over to Rugby to visit Zoe, have some tasty vegetarian food and to have a prowl around the charity shops. We had a fab day, and we both came home fairly laden down with goodies. I found a book I'd been looking for for 30p, some lovely Topshop sandals in a charity shop and Zoe donated LOTS of yarn, some vintage sewing notions and a Hornsea jar to add to my collection. Not to mention the fact that she treated both of us to tea and home-baked treats in her lovely home. It was a good day. 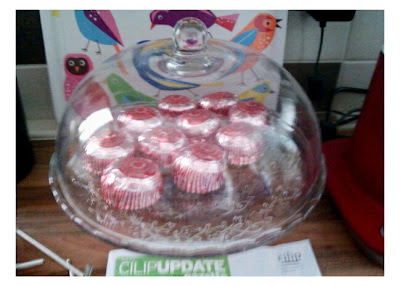 We didn't eat these Tunnocks Tea Cakes, but I loved the way Zoe had them displayed

I had a considerable amount of rushing around to do when I got home, as Nic and I had made plans to spend Saturday evening hanging out with Kate and her baby girl Evie. We walked up to Kate's house, enjoying the rain and the walk. I was somewhat disturbed to find my old Nemesis lurking in the streets of Leamington:

This brought back some unpleasant memories of A-level English lessons...

We had a bedtime cuddle with Evie before settling in for an evening of wine, pizza and The Office. It was so much fun to hang out with Kate, and really enjoyable to watch The Office with someone else who loves it and wanted to talk about it. It was a fab evening.

Sunday was very quiet as Nic was working, so I settled down to a bit of sewing and a lot of pottering. It was most restful and enjoyable, and we even managed to get a little walk in what sunshine there was left in the afternoon. I took the charity shop Topshop sandals out for a test, and they're okay. They rub a bit, but nothing a footsore old veteran like me can't handle.

I love this dress - it was another ebay purchase from a few months ago. Of course, the first time I wore it I got chocolate pudding on it, so lucky for me the fabric washes well. Since last Sunday I've worn the sandals a few times too:

After an indolent weekend, it was straight into a busy week at work. Monday went by in a bit of a blur, and on Tuesday and Wednesday I was working in London. I have to admit, on Monday night I was getting a bit worried about going to London due to the riots, but I needn't have worried. I was working in our parent organisation's offices in Westminster, and it was a tiring few days. The work is fantastically interesting - which is a really nice change - but it was very tiring. Still, I really appreciated the change in pace because I have been so bored recently. It helped too, that I was working in such a pretty part of London. 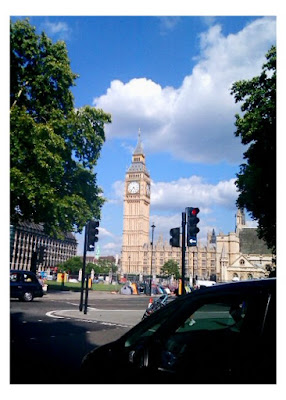 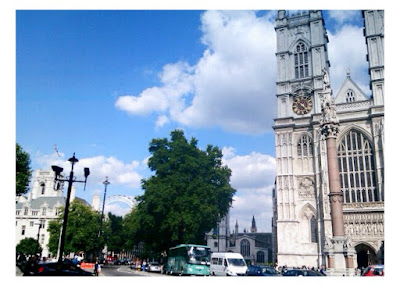 My walk to the office


I rushed back on Wednesday afternoon for the Sew Make Believe book group, so by last night I was bloody knackered. Like last week, Nic and I were rudely awoken at about four in the morning by some loud hallions outside. Two guys ransacked the recycling box for glass bottles before talking loudly for what seemed like hours about what 'badmans' they were and how they'd 'do someone' and one of them was claiming his 'missus is a copper' - it was tiresome in the extreme, especially when one of them started rapping. For real, RAPPING. They got bored before I phoned the police.

I've been having a quiet day today, working from home, interrupted only by a quick trip out to the shops for some groceries. Still, I'm nothing if not a multi tasker, so I thought I'd get in a little Shoe Save too...

This dress is another Fever-via-ebay dress. It was weirdly serendipitous, because Denise and I had been chatting about this dress as a one-that-got-away from a few seasons ago, and it popped up on ebay the following day. So naturally enough I couldn't leave it, and luckily no one else spotted it. I love the print, and although the orange is very bright I like it anyway:

As for the shoes, well I suppose they're saved now although they're a bit neglected.

They're quite cute, and neutral and all but I have a bit of a grudge against them. I bought them on impulse in a sale and they are deceptive buggers. They were grand the first time I wore them, but the next time they rubbed the shit out of my ankles, making them bleed, and I've never really forgiven them. Also the inside upper has wrinkled up, so they rub on the inside too. Heh. Maybe I should get rid of them - so maybe this is a stay of execution rather than a save.

Nic and I are off out to the pub tonight with some friends, and we have another fairly sociable weekend planned so I shall sign off here, but I'll try not to leave it quite so long next time! Have a lovely weekend all.

Hurrah for Friday and for wine time!
Posted by Roisin Muldoon