And on that BOMBSHELL...

It's rare I don't kick off with a random quote, but as yesterday was the great Bombshell Meetup, I thought I'd change things up a bit in here!

So yes, yesterday dawned bright and sunny and I was all psyched (and a little nervous) to be heading down to London to meet up with some beautiful fellow sewists. When I concocted this plan a while back, I had thought of sewing something new for the occasion but life and my lameness got in the way. Still, it was no hardship to give Chantilly a bit of love. Nic thought it best to get a picture of my outfit BEFORE it was besmirched by train travel or numerous cocktails (and he was right - I ended up getting pistachio macaron on my dress on the way home. Roisin: Keeping it classy since 1982)

My lovely Chantilly dress, with a petticoat and Irregular Choice No Place Like Home shoes

The train journey down was grand - well, I was a bit grumpy owing to having forgotten to bring a snack. So I took my rage out on some unruly youths who tried to cut in on me in the queue in the station. Little brats! Apart from that, I made it to London without incident and after a delicious lunch in Paul and a quick browse around the shops, I headed over the river to the BFI to meet the girls. Well, I had to stop to take a photo of this amazing view:

London from the Jubilee Bridge

At the BFI I was joined by the other ladies and, after a bit of back and forth, we managed to get settled into a booth. Armed with a cocktail menu and a lovely, handsome, attentive waiter, we were all set.

The Bombshells, from left to right - Suzy, Karen, Jane, me, Amy and Alana

I can't begin to tell you how much fun I had. I'd met Karen and Amy both before, but it honestly felt like I'd known everyone for far longer. Maybe it was the tongue-loosening nature of the cocktails, but I don't think it was just that. I felt like I knew these women - I knew their stories, how they expressed themselves. Seeing Jane's beautiful Oolong dress was like seeing a friend too - I followed her progress in making this on her blog! That's one of the marvels of the internet, I suppose. Yesterday was so much more than a bunch of strangers with sewing machines in common - it was a meeting of minds, friends and dresses. It was AWESOME.

Me with Amy and Alana

Karen with one of her cocktails - this one was called the South Bank, and it looked immense.

I was a bit nervous about my choice of venue - especially as I had forgotten that there are two bars at the BFI, but it was brilliant. For one thing, it's a really cool place. I love the BFI (can't wait to go there for Cagney and Lacey at the end of November) The cocktails were absolutely delicious. I had two of these: 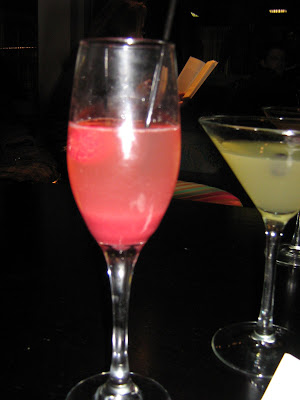 This one is called a Carol Channing - it was champagne and framboise, with a raspberry floating on top. Truly delicious

and one of these 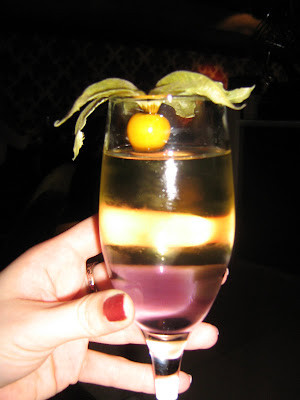 I can't remember what this one was called but it had St. Germain, Creme de Violette and Champagne, with a cape gooseberry on top. I should have had two of these. I'll have another when I go back in November.

I also had a gin and tonic, and some chips. As I mentioned before, the service was fabulous and we were so well looked after. I couldn't have asked for better. Eventually it was time to part ways and wend our respective ways home. Not before we got some photos of the Bombshells themselves, though.

Seeing these dresses in person made me think I should get my finger out and sign up to the course. Sure, they're not everyday dresses but they looked fabulous. And wearable, too! Suzy and Karen are absolute stars to have made these, and to have made yesterday possible. They were starting to feel a bit dazzled by the flashes by the time we were finished photographing them, but I think they both look every inch the Hollywood starlets here!

By a strange coincidence, Amy and I were both wearing our Ruby Slippers, so when we spotted this poster on our way out we had to pose in front of it:

I didn't get back to Leamington until after 11 (which put paid to my plans to go to the pub - probably just as well, really) because of engineering work, cancelled trains and such. Luckily I was drunk enough to take this in my stride, although by the time I got off the rail replacement bus in Leamington I had sobered up a fair bit!

I have to say a massive thanks to Suzy, Karen, Jane, Amy and Alana for coming along yesterday and making it so much fun. I confess - part of me worried I'd be sitting on my own in the BFI with a pitcher of cocktails for one - but I needn't have. I just can't wait now to do it again!

Right, I'm off now for part 2 of my weekend adventures. Nic and I are off to Stratford to see The Divine Comedy at the RSC. I'll see you all later!
Posted by Roisin Muldoon