Great story. I'll remember that the next time I'm in a knife fight.

Evening, folks. I hope you're all having a pleasant Sunday evening. I'm curled up with a blanket, watching The Box of Delights with Nic. We don't have time to watch them one a week before Christmas, but we're going to make sure to get them all in before then. It's lovely comfort viewing on these dark nights, maybe we'll even watch the BBC version of The Lion, The Witch and The Wardrobe as well.

I've had a wonderful, and very tiring weekend. I was working from home on Friday and finished nice and early so was able to go out for a walk with Nic before it got dark. There's a new coffee shop opened on Warwick Street that I wanted to try, and we also accidentally found ourselves at the opening of a new vintage shop called Braderie. I didn't buy anything, but it's a lovely shop - I hope they do well. They stock a variety of vintage and new clothes, accessories and homewares. The prices seemed reasonable and I thought the layout and design of the shop was really charming and welcoming. I took a few photos on my phone: 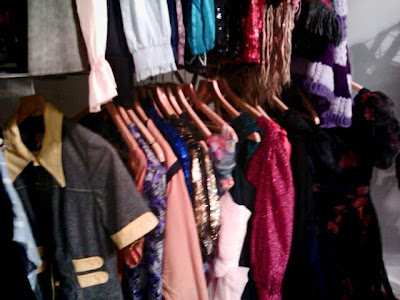 Some of the racks of dresses ... there were lots of 60s evening dresses 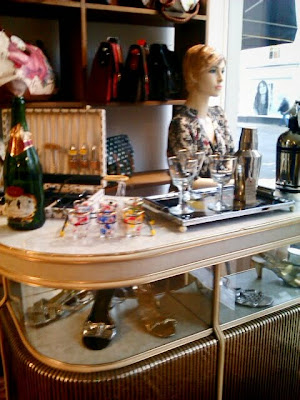 I loved this bar set up by the door 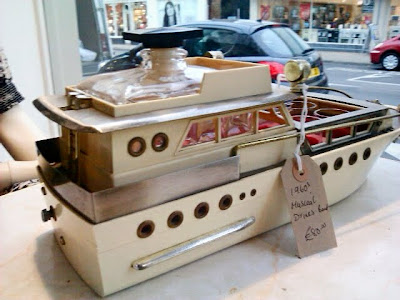 It had a cocktail boat! 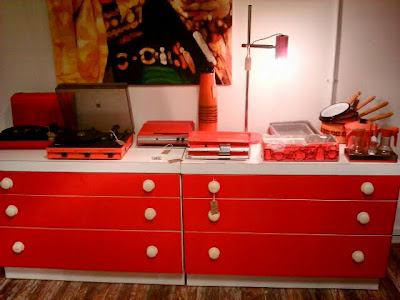 I would never have thought of orange as a good colour for cabinets, but I loved these 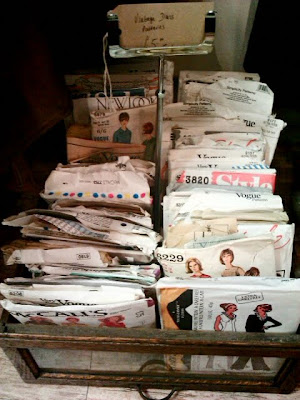 A box of sewing patterns... mostly 80s, sadly. Still, it was nice to have a rummage through

I liked Braderie. They also stock Emily and Fin dresses and accessories by Disaster Designs - not the only shop locally to do so, but pretty things nonetheless. If you're in Leamington it's worth popping in! I can only hope that the presence of a decently priced vintage shop two doors down might make our local Oxfam rethink its ridiculous pricing. Well, one can only hope.

After a quick dinner on Friday night I got myself gussied up and headed out. It was my dear Lauren's birthday this weekend and we were celebrating that. Firstly it was drinks in the Jug and Jester, which was fab. Lots of double gin and tonics and chats, before going for a bit of a dance in the Assembly. The last few times I've been there have been on a Saturday night and the music has been disappointing, but Friday nights are 60s, 70s and 80s. It's an older crowd, but the music was good and we were hardly off the dancefloor, and a particular highlight was dancing to Love Shack by the B52's (this was the first single I ever bought on vinyl. Not my first ever single, but my first on vinyl.) I was disappointed that the DJ didn't respond to my request for Wuthering Heights, but in fairness it would have cleared the dancefloor. It was late enough when we got home, and I had to be up quite early (well, early-ish) in the morning, but it was one of the best nights out I've had in a long time. Happy birthday, Lauren!

The reason I had to get up early on Saturday was because I'd made plans to visit the Vintage Fair in Coventry with Louise and her husband, Peter. I have to make a confession though. I'm not that arsed about vintage fairs. I like clothes, I like vintage clothes, but I rarely buy anything at them. Still, I had a lovely day. Sweet lady gin had been kind to me again and I wasn't too hungover (although, being bounced around on the bus over to Coventry wasn't terribly enjoyable with a bit of a ginhead on me) and I enjoyed rummaging around. Louise struck lucky with a beautiful dress, Peter picked up some nice threads too, and I just enjoyed the atmosphere. Afterwards we headed over to Coventry Transport Musuem for a craft fair, before stopping for coffee and a good old chat. After a potter around town with Louise's mum, I came back to Leamington to prepare for our second night out. Our good friends in Noke were having their album launch party in The Prince of Wales, so off we went to that. It was a really cool, relaxed gig and a good venue too. From the outside, the Prince of Wales looks like the kind of bar I usually hate (complete with wanky Banksy prints on the walls) but it's well laid out for a gig and the atmosphere was really good. Sadly we were both quite danced out from the previous night, so I couldn't really get my groove on as much as I would have liked. Really, I'm getting too old for two nights out on the trot but sometimes it just has to be done.

This morning we had a long lie in before getting out into the beautiful sunshine. I can't get over how mild it is - I'm sure that when the weather turns very cold it's going to be a shock to the system - but for now I am very grateful for these beautiful days when I don't have to be totally rugged up. Nic and I had a wander through Jephson Gardens, which really comes into its own in the autumn.

I got this dress a few weeks ago on ebay - I'm not ashamed to say that I'm hunting down these lovely River Island frocks because they're just so wearable. This one was scandalously cheap! My Ultragirl shoes came from ebay too. I'm not normally one for flats, as I'm sure you've realised, but I thought that it'd be practical to have a pair for the colder weather and these are just the ticket. I loved this outfit. I've been really ambivalent about my outfits and my photos recently, but I like this, and I like the photos too.

Look at those beautiful autumn leaves!

This autumn breeze will strip the trees, and freeze me to the bone...

Saved as part of my Shoeper Shoe Challenge!

We had coffee with Lysy and The Scientist before coming home to do some work and some chores. And now my darling Nic has got dinner bubbling away on the stove, and we're about to settle in to watch The Bourne Ultimatum. It's not exactly a cosy Sunday evening film, but he's teaching it this week. I like Matt Damon, though, so no complaints from me on that score. I hope you've all been having a lovely weekend, mind yourselves and I'll catch you later.
Posted by Roisin Muldoon