Ah, but if less is more, then just think of how much more "more" will be!

Nic and I are having a bit of a dropout Saturday, today. When we woke up this morning and saw the wintry sun streaming through the plans, the idea was to go for breakfast and then walk across the fields to the Saxon Mill. Instead, we went for brunch and have spent the afternoon lazing around which has been just peachy.

After such a crappy day on Monday my week thankfully did take a bit of an upswing. I had a couple of big things I needed to get done during the week and which were stressing me out, and I think that getting those done helped clear my head a lot. The other thing was reminding myself that, you know, having a job is no bad thing even if it does suck quite hard from time to time.  I'll have to keep reminding myself of that in the upcoming months, I think, but what can you do?

Wednesday night was the Sew Make Believe book group meetup. As always, spending time with like minded people was a tonic. The book under discussion was One Day by David Nicholls. When I read it, I quite liked it but found Emma and Dexter to be utterly intolerable. Emma in particular, I thought she was an insufferable prig. What was interesting about the discussion was how it made me reassess my position on the book. I wouldn't read it again, and I still think Emma was a bore, but my attitude towards the book definitely softened through the discussion. You can read the roundup post about it here, and Kate reviewed it here as well.

Thursday was a loooooong day, so I was really glad to get home, especially as there was some post waiting for me. In a fit of feeling sorry for myself earlier in the week, I'd bought myself another new pair of shoes. Sigh, I know. That makes me very predictable. In my defence, I'd been after them for a while so it wasn't just an impulse purchase, and I would have bought them anyway, but I admit that it's not a brilliant way to deal with stress. Still, seeing the shoebox waiting for me when I got home did cheer me up: 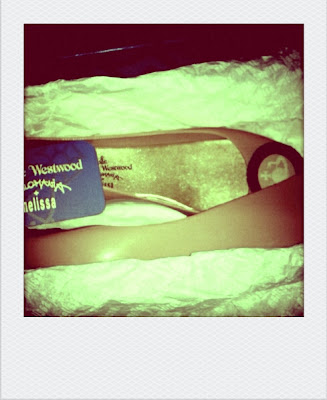 I know, more Vivienne Westwood Melissas. These are the pink cameo versions of the Ultragirl shoes, and were on sale. The wax seal pair I bought on ebay back in November have become one of my favourite pairs of shoes, which is bizarre for me. But occasionally I have a morning where I'm still not fully awake when I'm leaving the house, and my legs protest at the idea of heels, and the flats come in handy. I was working at home on Friday, and when I peeped my head out of the door at the end of the day to run some errands, of course I wanted to break them in:

I hadn't been expecting the shoes themselves to be quite as pink (I thought they might be more of a pale blush) but I like them a lot - they'll fit right into my wardrobe: 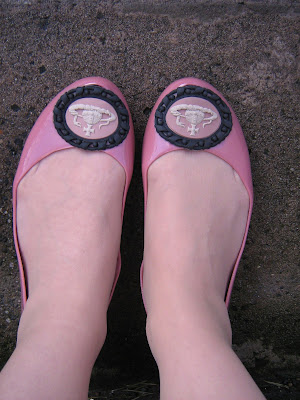 December and January have been a bit drastic for me, shoe-wise. My overall count has gone up by a fair bit. I'm pleased to say that I've been wearing them all, and although I may not have been obeying the letter of the Shoeper Shoe Challenge, I have been obeying the spirit of it. I haven't officially saved lots of my shoes, even though I've worn them (and even been photographed in some of them) which, by the rules, means they haven't been saved. But I'm going to give myself a pass on it, because I have worn them, and also the Shoe Challenge has been really good for me. Yes, I have more shoes now than when I started but I've been ruthless about getting rid of the ones I don't wear - the ones that hurt, or aren't my style, or don't fit correctly. So I think that's still not such a bad thing!

After dinner on Friday night, Nic and I headed out for a few drinks and a bit of dancing with some friends. Our good friend Rick had passed his PhD viva earlier in the week and the time was ripe for celebrating! It was too cold to contemplate getting changed, so I switched my shoes (to my cherry Lady Dragon shoes, which are fabulously comfortable for dancing in and tried something new with my hair: 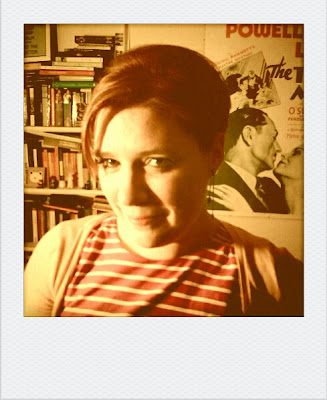 A (very) mini beehive! I didn't get much height on it because I don't have enough hair, really! Still, it had good staying power even through a night of dancing so I'd do this again. The night of dancing was super fun. I didn't have much to drink (which rendered me pleasingly hangover-free this morning) and I enjoyed cutting loose on the dancefloor with my friends so much. Dancing away the cares of the week in the company of people who mean the world to me, well it just doesn't get much better than that!

Nic and I slept late this morning and did little other than potter around in town. We had brunch in Bread and Co, looked in the charity shops and picked up some groceries before coming home to lounge around on the sofa. Our next few weekends are busy, so it is pleasing to be idle. The sun came out and it was very pleasant in town:

Squinting! Ruby Belle Osaka pinafore, cardigan from Warehouse and Irregular Choice Cortesan shoes
I never thought to pair this dress with these shoes before, but I think they work so well together. I love the print on the frock, which was one I bought from the sample rail in the Fever shop: 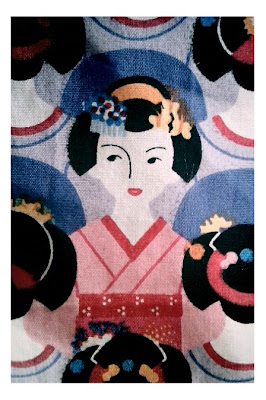 The shoes themselves also have a pretty sweet print: 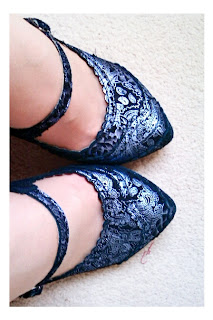 And really, that's been the height of excitement for me today. It's been aces. On tonight's agenda is the Season 6 finale of The X Files (fragments of alien spacecraft washed up on the Ivory Coast, covered with Biblical inscriptions: SWEET) Robert Vaughn's guest appearance in Coronation Street, last night's episode of New Girl on 4OD, Moroccan chickpea curry, ice cream and chocolate sauce. Until tomorrow, my dears.
Posted by Roisin Muldoon