Father Daley in Chicago? Wasn't he the first man on the scene when Malcolm X was assassinated?

Afternoon everyone! Nic and I landed our jet-lagged asses back at Heathrow yesterday morning after a bit of a delay - we got back to Leamington and went pretty much straight to bed, and I'm only really getting myself straight now. A hardcore traveller I am NOT. Still, it was good to land to sunshine and it was totally worth it for an amazing holiday... and I'm going to tell you a bit more about it now. Lots more photos on their way!

On Thursday morning we had breakfast by the pool as usual, and then as I was taking some photos my camera broke! This was most annoying - I mean, obviously the darn thing had to break while we were on holiday. To be fair, though, it's a pretty old camera and one I got for free when my sister upgraded hers. Luckily we had a Walgreen's around the corner from our hotel so I was able to get a new one for £30! Result! 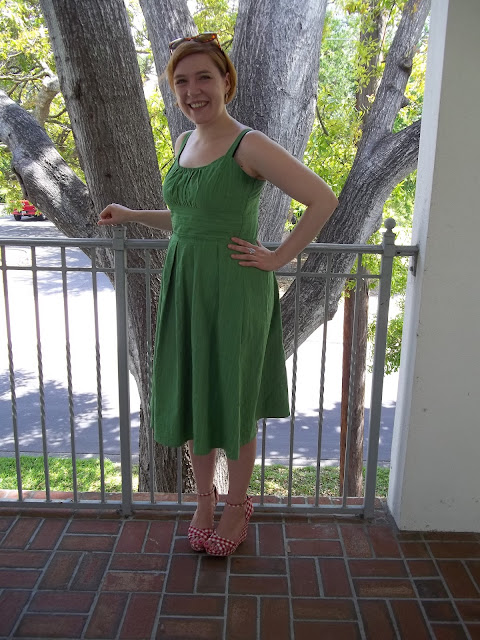 This is (one of) my Amber knock-off look, as she has this dress and the orginal version of these shoes. Amber, I hope you don't think I am a total stalker. Seriously. This dress popped up in a green dress search on ebay and for a few pounds I thought it would be a good warm-weather buy. It was, too and once I took the straps up by about a foot it fit well too. This was another frock that the good people of Winter Park liked, the manager of the hotel told me at breakfast that I looked just darling. The abundance of compliments plus the year-round good weather could make me want to move to Florida, I'm just saying.

The Rev arrived in Florida on Wednesday evening and was speaking at Rollins on Thursday night, so we headed down to Park Avenue to meet him for lunch and a wander around the town. It was another beautiful day and while Nic and The Rev sorted some stuff out in the finance office, I explored a bit more: 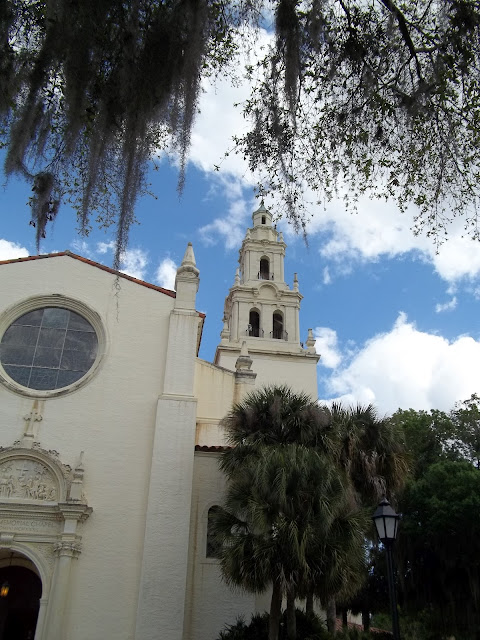 The Church on Rollins campus. This reminded me so much of the Mission at San Juan Bautista that I joked with Nic that I wasn't going up there with him, much to our host Julian's consternation - "That is not the romantic relationship I thought you two had!" was his reply when I told him I didn't want to be no Kim Novak! The church is beautiful and the tower looked breathtaking when it was lit up at night. The dangling matter that you see on the trees at the top is Spanish Moss - it is nourished by the air and can be seen on almost every tree in Florida. It's beautiful and eerie, and apparently is home to all sorts of bitey creatures so I limited my appreciation to photo taking! 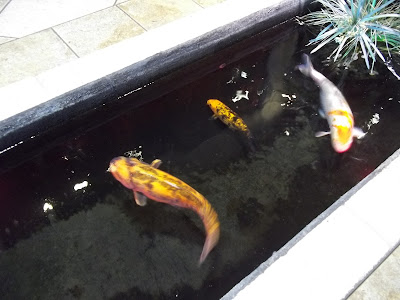 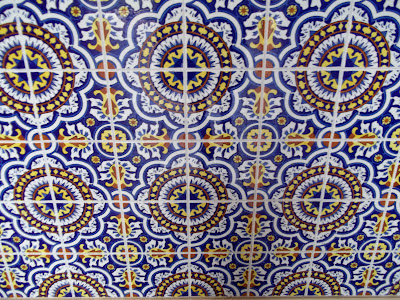 These tiles are on the outside of the Rollins library building. The whole campus is full of details like this.

I waited for Nic and The Rev on the terrace of the library, reading in the sunshine on the beautiful wicker rocking chairs: 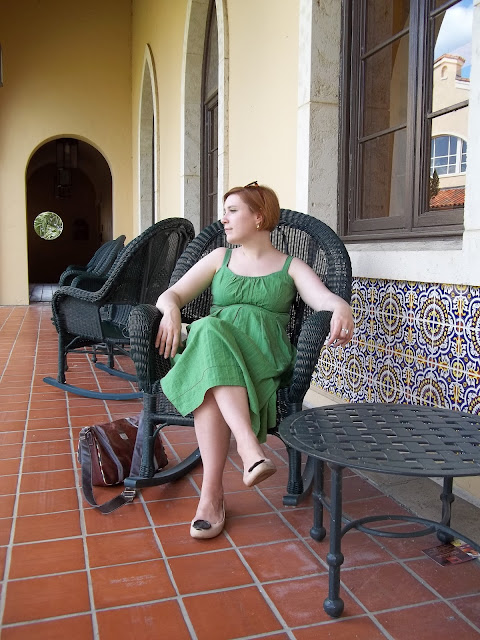 After The Rev's talk, our lovely host Julian took us out to dinner at Seito at Baldwin Park. Seito is a Japanese restaurant and over vegetarian sushi and TEMPURA CHEESECAKE (which is just as mindblowing as it sounds) Julian told us about the area - the benefit of having a tour guide who is an urbanist! Baldwin Park is a new urbanist community and was built with a very specific idea of building a community. The town that The Truman Show was filmed in is in Florida, and was built to the same specifications. Sadly I didn't get any photos but if you've seen the film you can imagine. By the time Julian dropped us back off at our hotel I was pretty tired so we went straight to bed.

On Friday we checked out of the Best Western. It was booked up due to Rollins Alumni Weekend, so for Friday night and Saturday night Nic and I were due to stay at a bed and breakfast in nearby Maitland, called Thurston House. I wasn't sure what to expect from the experience and I must say I was totally unprepared for how much I would fall in love with the place.

The innkeeper, Carole, kindly offered to collect us from Winter Park and take us to Thurston House. This was typical of her kindness and thoughtfulness - she made us feel welcome right from the very start. The house itself is gorgeous - set in around 8 acres of countryside and overlooking Lake Eulalia. It was built in 1885 and painstakingly restored by Carole and her husband Joe when they took it over around 20 years ago. The house is to die for: 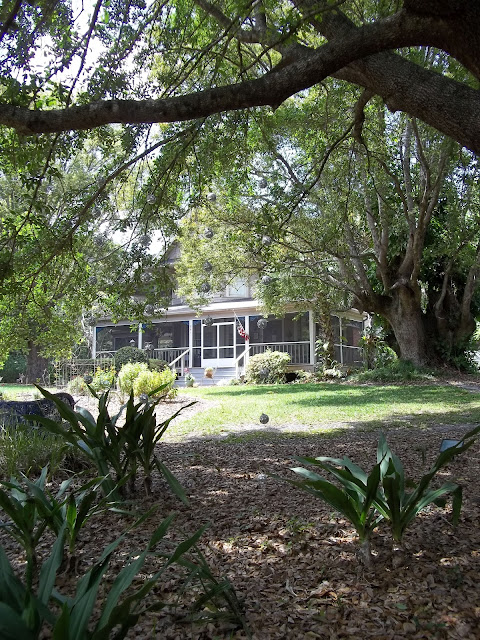 There are three rooms available to stay in, and Nic and I stayed in the Hirsch room. We had a four-poster bed and a roll-top bath with a rubber duckie! 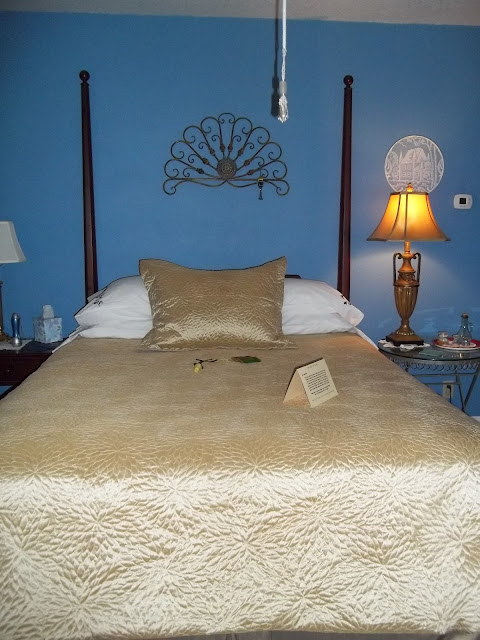 One of my favourite things about Thurston House was the wraparound porch downstairs, and the screened-in porch upstairs. It was right next to our room and home to a two-person hammock! Needless to say, I spent a good deal of time reading and napping in the hammock: 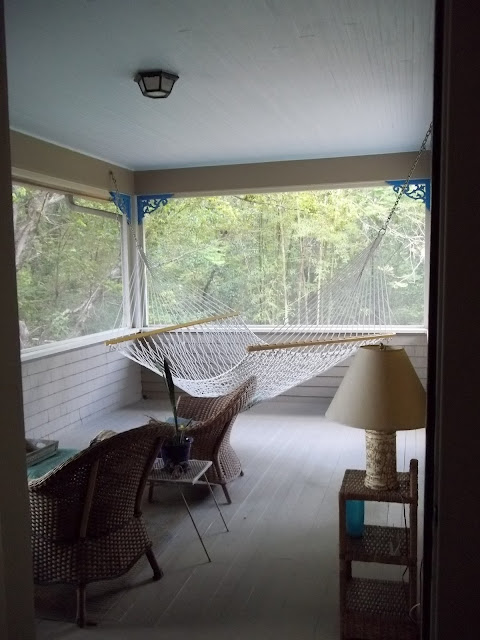 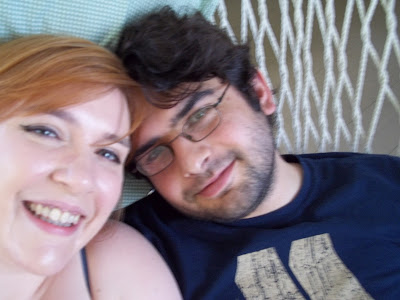 A hammock for two... 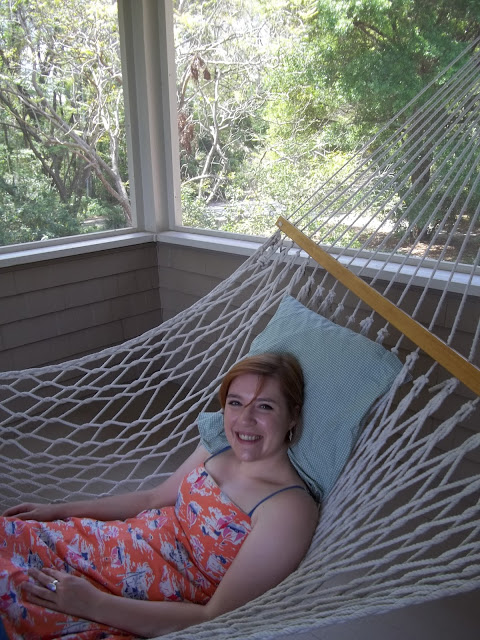 ...but most of the time it looked like this 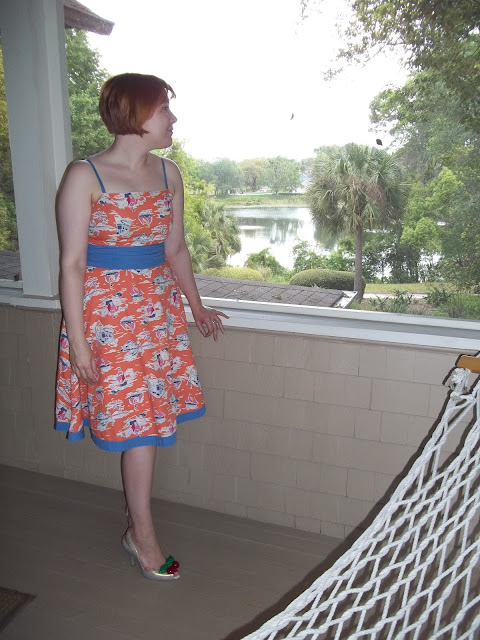 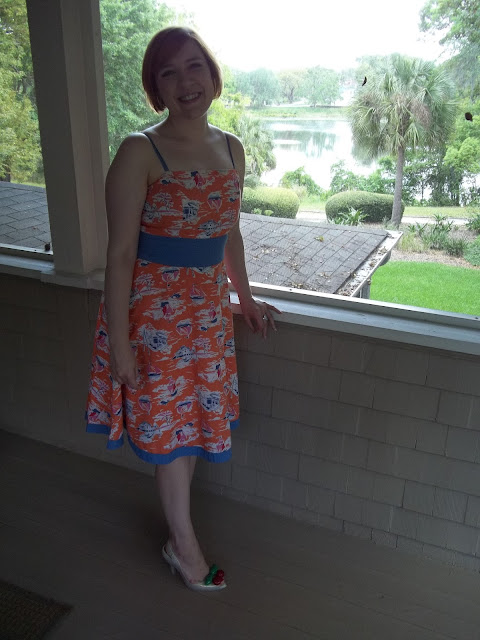 Ruby Belle Photograph Beach dress and Vivienne Westwood for Melissa cherry Lady Dragon shoes. I wore these in the morning but changed out of them for afternoon exploring

This was the only strappy sundress I brought with me, reasoning that it would be too much of a faff with the sunblock and having to wear a strapless bra! But of course it worked out fine, and I didn't even burn. I love this wee dress - orange and cornflower blue are a beautiful combination and it is so comfortable. It's my most misadventured in dress as I keep spilling things on it, but it is cotton and washes well and the busy print is distracting anyway! Anyway - after another lounge around on the hammock it was time to get out and explore Maitland: 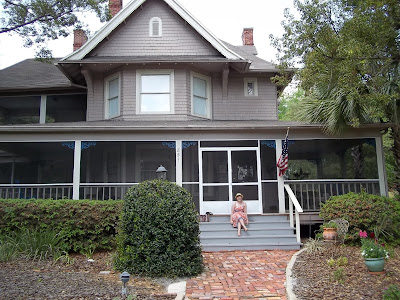 On the porch at Thurston House 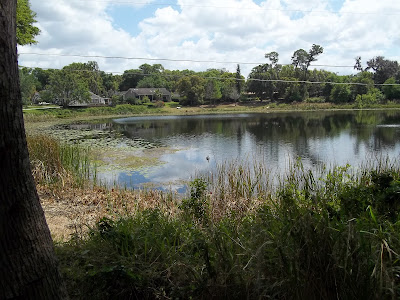 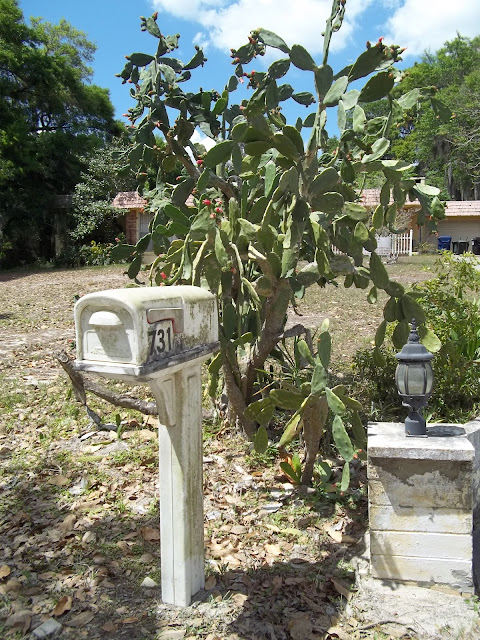 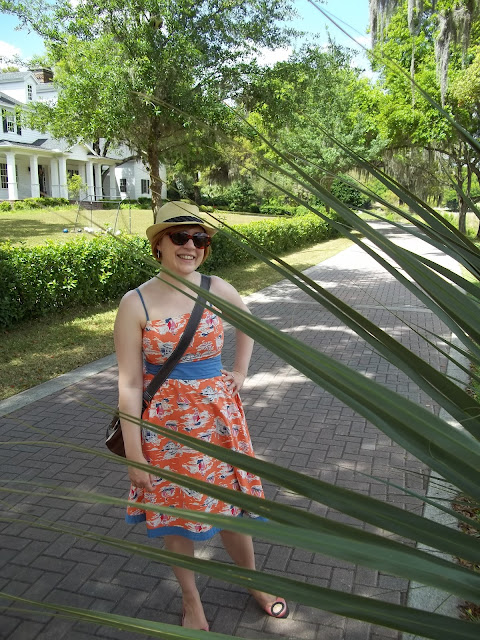 Maitland was once an artists' community, and nearby Eatonville was the home of Zora Neale Hurston. Maitland's love of the arts is still reflected in the community by the Enzian Theatre and the Maitland Art Centre. 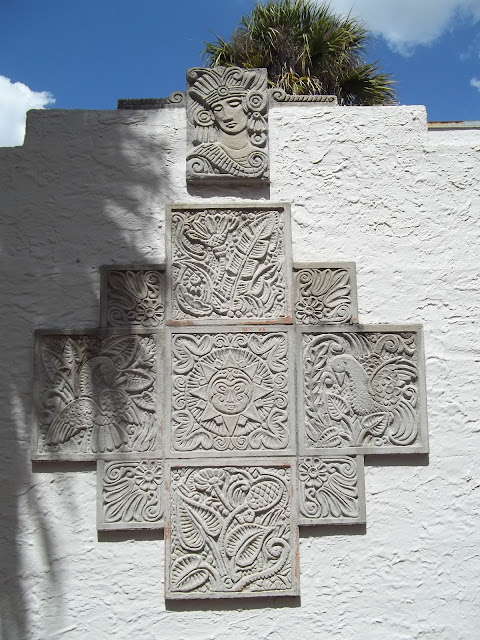 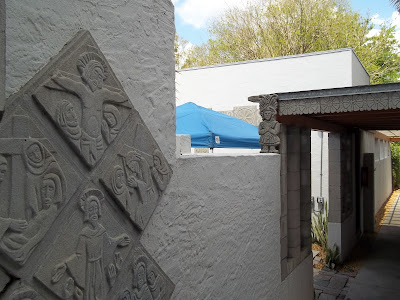 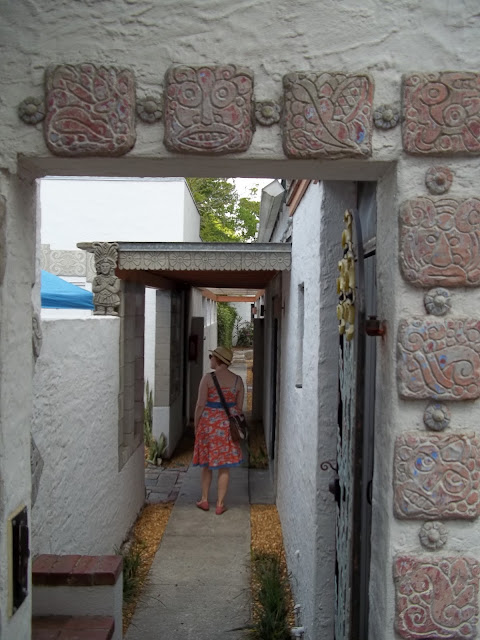 A short walk later and we were at Lake Lily Park. We stopped for lunch at Antonio's before wandering across the boardwalk at Lake Lily Park. I didn't get any photos of the boardwalk itself because we were too busy looking at all of the amazing wildlife - ducks, dragonflies, ibises, fishes and turtles! I might have done a little squeal at all of the turtles we could see in the lake: 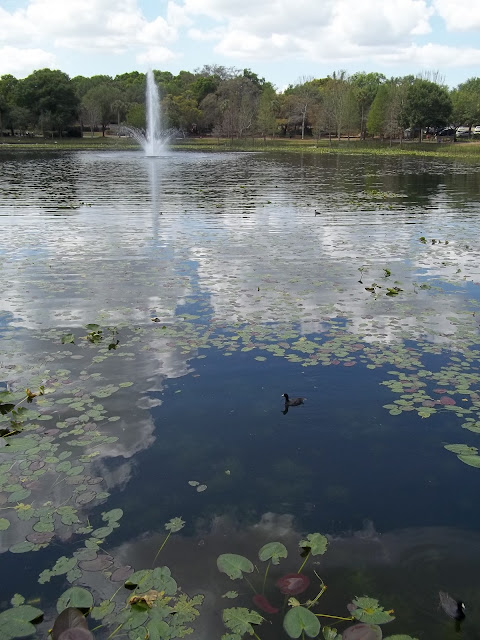 You can see why it's called Lake Lily... 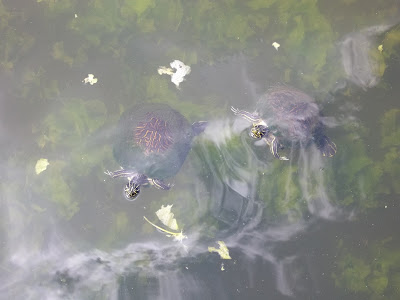 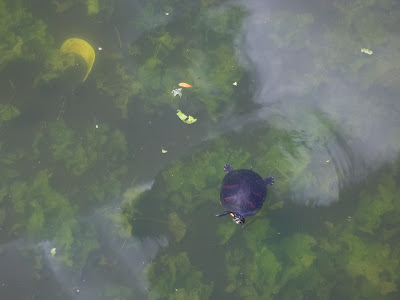 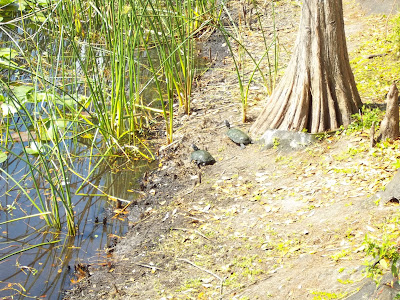 Turtles! They're obviously used to being fed because as we stood on the boardwalk watching them, they congregated expectantly! They were so cute - some tiny little ones were concentrating on trying to climb onto the backs of the bigger ones, and they were all sticking their heads up out of the water to see what was going on. They can swim surprisingly fast and seeing all of them rather made up for the complete lack of Gator action I got on this holiday.

After visiting the turtles it was time to head back to Thurston House. Carole and Joe serve wine and cheese ont the porch at five, and we spent an hour or so chatting with them. More than anything else, I think this is what made me love Thurston House. I felt so at home, and Carole and Joe were such wonderful hosts! As the sun began to set, Nic and I set out in search of dinner before ending the evening with a bath before bed. It was another perfect Florida day!

Nic had to be up early on Saturday morning to get to his conference, so we had breakfast at 8. Carole had emailed Nic to ask about our dietary requirements before we arrived, and had a delicious vegetarian breakfast waiting for us - a gorgeous vegetarian frittata served with fried potatoes, fruit salad and scones and german chocolate cake to have with coffee. What a start to the day! Nic went off to his conference and I got in the hammock with my book, and stayed there until he got back at lunchtime! He brought The Rev back with him, so we took him down to Lake Lily to meet the turtles before all of us joined Carole and Joe on the porch for more wine at 5 pm. Julian picked us up at 6:30 to take us downtown for dinner. We went to Ceviche on Church Street, where both the tapas and the cocktails were incredible: 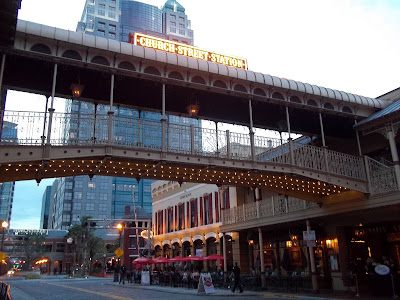 Church Street station - this is all bars and restaurants and it was jumping on Saturday night! 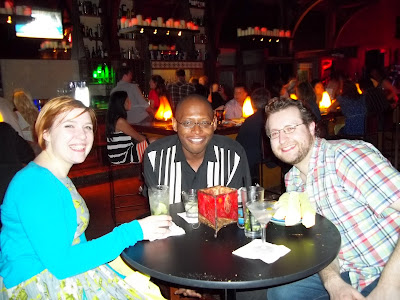 Aaah! When flashes attack... with Julian and The Rev over drinks in Ceviche

We had pudding in Urban Flats before going to The Milk District (so-called as it's where the TG Lee creamery is) to a little bar called The Milk Bar which is renowned for its loooooong list of micro-brewery beers. It was a really cool place, even if I stuck to Root Beer. Root Beer, though? This was one of those American things I was keen to taste, I thought maybe it would taste like Dandelion and Burdock, or something, but it tasted like the way Deep Heat or maybe Germolene smells. So, yeah... it was fine, but I couldn't manage a whole bottle! Poor old Rev was feeling a bit jet-lagged so we headed back after this and it was two sleepy little people who crept up the stairs in Thurston House that night!

Right, that's enough for today... I'll share the last few days in Orlando with you all the next time!