Is it a coffee table? Is it a panther? There's no need to decide!

Hi everyone! This is just a wee short post to check in and say hi - we're halfway through our wee holiday in Florida and it's amazing. I will post about it properly all probably next week and bore all your arses off with every single detail and a bobajillion photos. Until then, just a wee taste....

Having never flown internationally (apparently flying from Birmingham to Belfast doesn't count) I was weirdly excited about the international flight. It was cool. Heathrow terminal 4 was a lot skankier than I was expecting but we had a good breakfast in Cafe Rouge (having spent the previous night in London) and then boarded. Having an Irish passport meant I was searched 3 times (yeah, thanks) but fine, whatever. We flew with Delta to Atlanta and then on to Orlando. 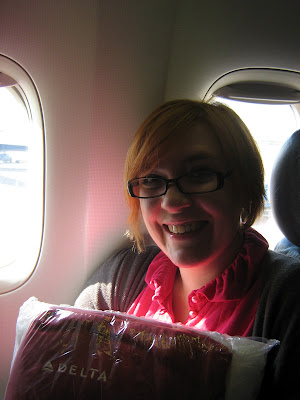 Here I am looking glamorous for the flight. I was very pleased with our little blankets - I get cold on the plane! The flight was grand, but getting through security at Atlanta was a bit stressful due to the massive queues. The Homeland Security people were very friendly, though. It was so good to land in Orlando and be met at the airport by Nic's friend Julian, who took us straight to our hotel. After a shower I was straight into bed - by this stage we'd been awake for about 24 hours!

Despite the long day I woke up early on Tuesday morning, eager to get out and explore. We stayed in the Best Western Mt Vernon Inn in Winter Park and it's really very nice. We were delighted to find that the weather was warm enough at 8:30 am to have breakfast outside by the pool: 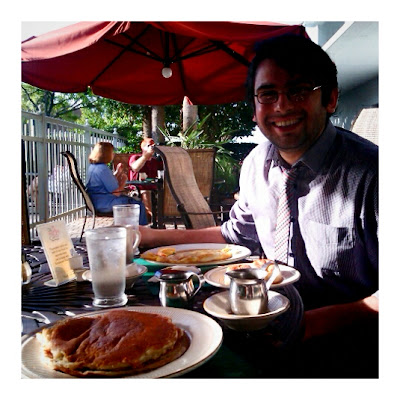 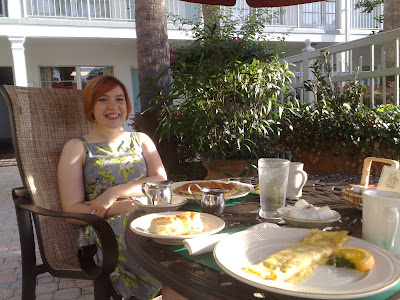 Best breakfasts in Winter Park, according to the locals. I can't disagree - the pancakes were incredible and Nic had an omelette almost every morning. 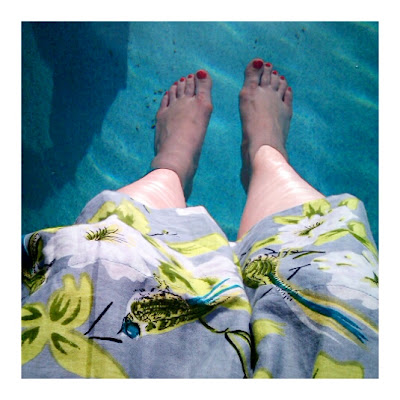 After breakfast we lazed around by the pool for a while before walking down into Winter Park. Orlando - like lots of other Southern cities - isn't great for pedestrians but Winter Park is more like a small town. The Rev, who joined us a bit later in the week, nicknamed it Bedford Falls and he has a point! This part of Orlando has lots and lots and lots of lakes, and there was a little one behind our hotel - a great place for an outfit shot: 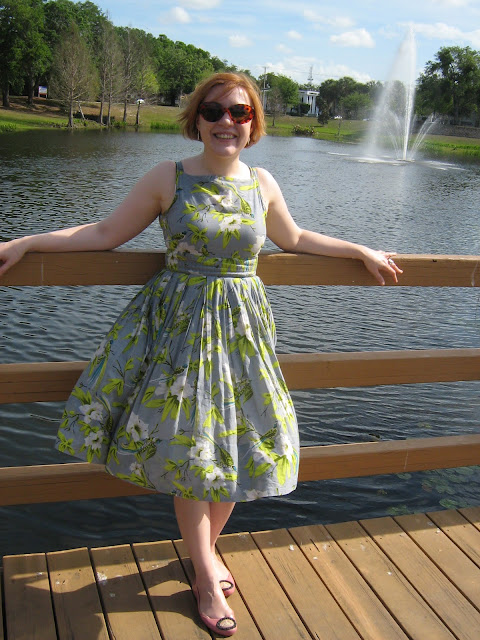 This is the perfect hot weather dress because I was quite covered up but cool - well, as cool as I could be! Central Florida is experiencing an unusually hot Spring. Every day so far the temperature has been in the high twenties/early thirties. Thank heaven for factor 50 sunscreen! The other cool thing about this dress is how many compliments I got - like, people were stopping me in the street to comment on it. That's partly Southern manners - people stop and say hello - but it did make me feel very special all the same. You know I loves the attentions, yes? 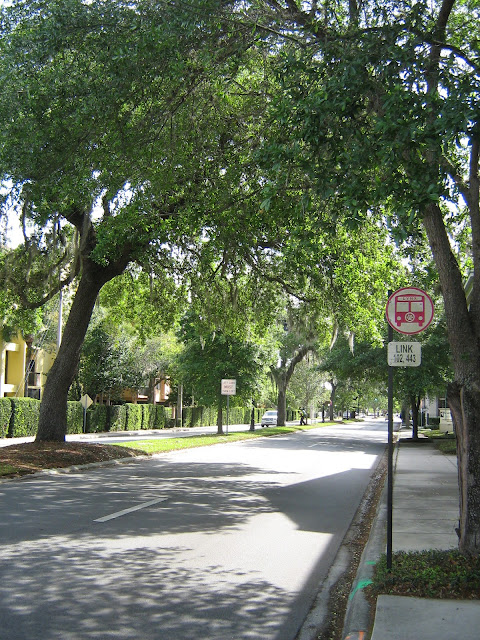 Winter Park is described as the Hamptons of Florida and I can see why. We were visiting Rollins College, where Nic was giving a talk on jazz in film. It's a private liberal arts college with a very small intake, and the campus is absolutely breathtaking. It's built around Lake Virginia, and was built in a Spanish style: 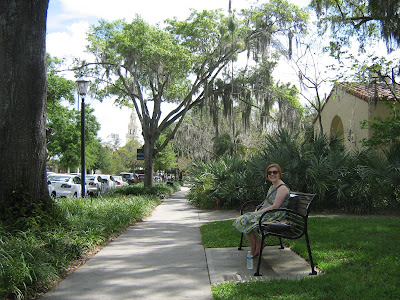 Our host gave us a tour of the college grounds, which are absolutely amazing. I can't imagine going to university in such a pretty setting, but then I can't imagine paying the astronomical fees for the privilege either! Before Nic's talk we walked along to Hannibal Square and enjoyed a few drinks in the sunshine at Dexter's: 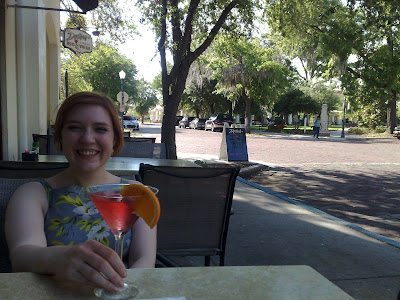 Nic's talk went really well. He had a small but appreciative audience and it was my first chance to see him giving a lecture so I was incredibly proud. Afterwards, our host treated us to dinner in a Thai restaurant and a tour of downtown Orlando before taking us back to our hotel. I slept like a baby on Tuesday night!

We had the day to ourselves on Wednesday so spent some time just relaxing by the pool after breakfast. I confess, I'd never really seen the appeal of beach holidays because I like to be out and about and doing things, but spending a few hours sunning ourselves by the pool made me rethink that attitude! It was blissful. 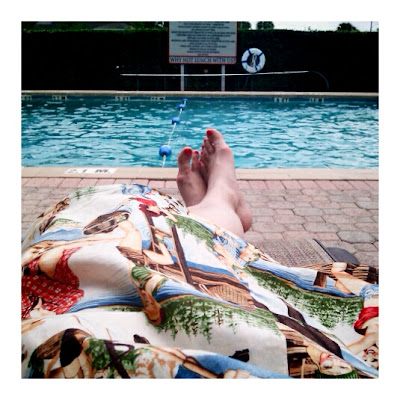 A girl could get used to this...

After soaking up the sunshine for a while, it was time head into Winter Park to do some touristy stuff. We walked down New England Avenue, which is a really picturesque walk, through tree-lined residential streets, and found a good spot for another outfit shot: 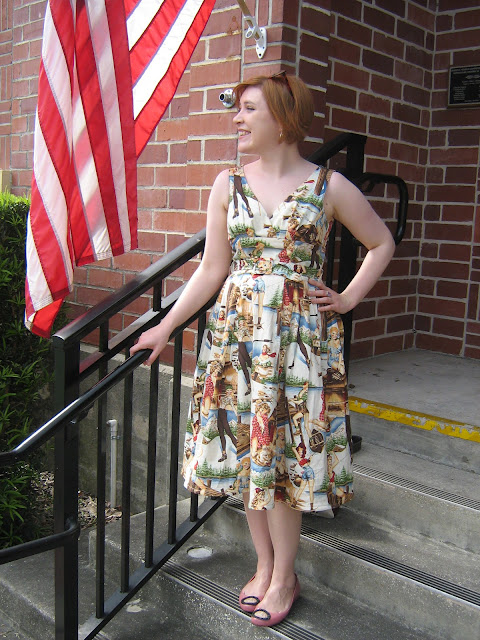 At the Winter Park Museum - The Great Outdoors Retro dress by Limb and shoes as before. Just before we stopped to take this photo a lady stopped me and said "Will you give me your dress? No? How about them shoes? No? How about that purse, then?!" which I took as a huge compliment!

The Amtrak line runs through Winter Park and it felt vaguely wrong but quite exciting to just walk across the tracks: 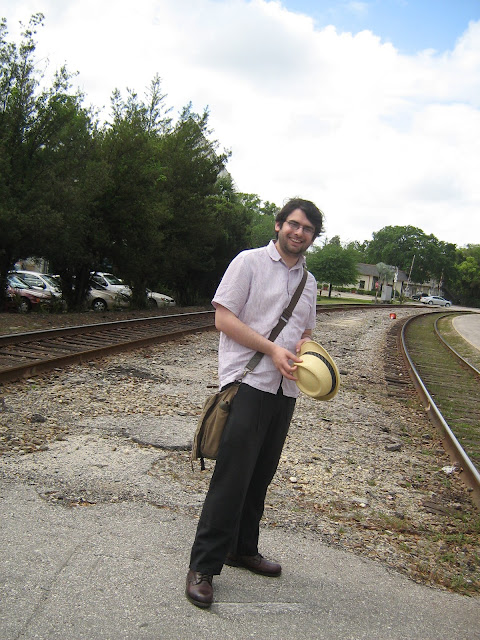 A boy from the Wrong Side Of The Tracks?

We headed down East Morse to sample one of Winter Park's famous tourist attractions - the Scenic Boat Tour. It takes in three lakes - Lake Virginia, Lake Osceola and Lake Maitland, which are connected by canals. It took around an hour and we were captained by Wendell who told us the history of the area with folksy charm and a lot of lame jokes! It was fabulous to be out on the lakes, particularly as they are bordered by the most fabulous mansions. 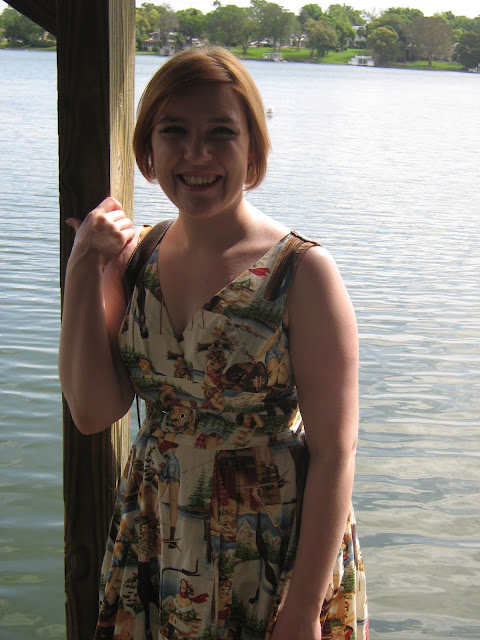 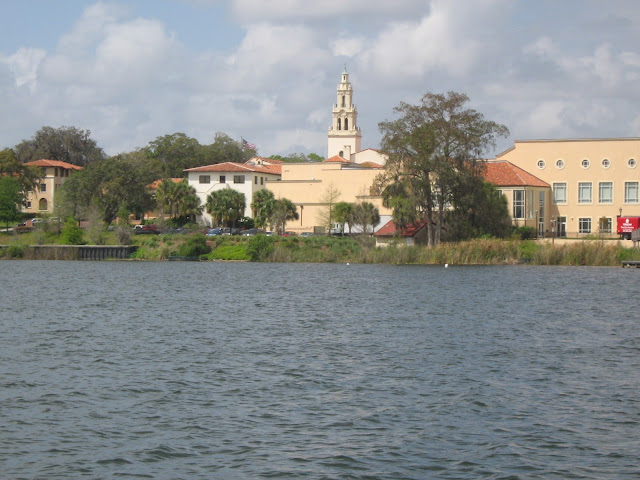 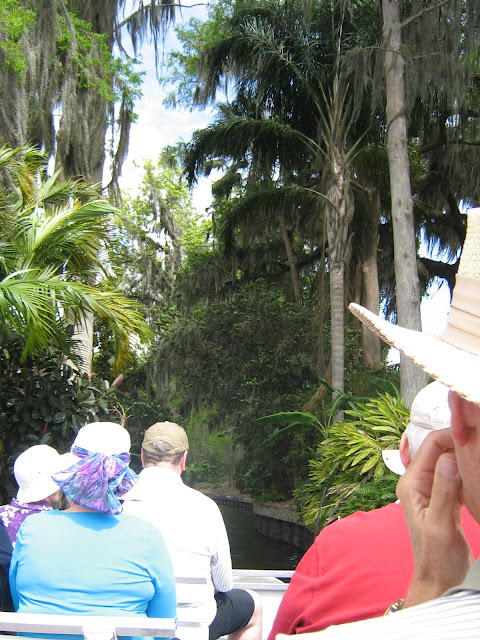 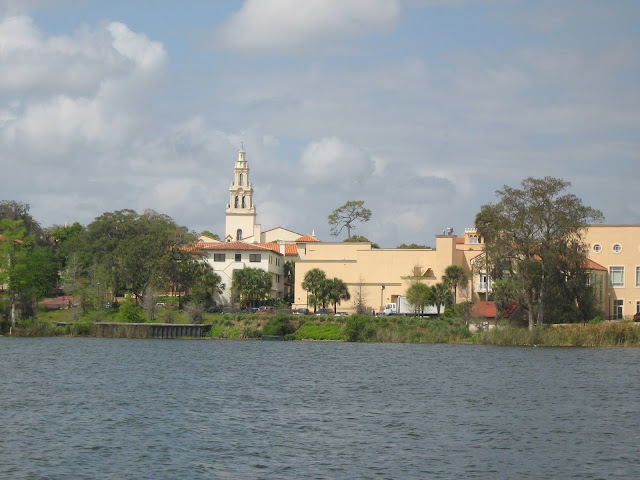 After the boat tour we wandered down Park Avenue, which is the main shopping area in Winter Park. It's filled with gorgeous boutiques and cafes, and there were so many dresses that made my heart race (especially the ones in Lilly Pulitzer) but my wallet sigh. I didn't buy anything, but I did meet this rather charming chap: 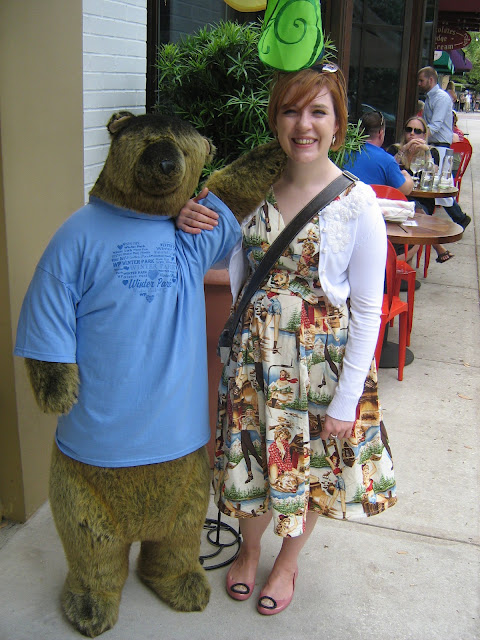 I loved this Bear. I wish there was room for him in my luggage...

We went back to the hotel to spend some more time by the pool before taking a little trip down to East Colonial Drive to Fashion Square, which is one of Orlando's malls. It's not one of the more famous or high-end ones but it was close by, had affordable stores AND a comic shop! It wasn't crowded at all, either so that was a bonus. After I bought some pretty shoes in Charlotte Russe for $20 (!) and we both bought comics in Coliseum of Comics we went across the street to Target. I wanted to get a full American experience! Target was good - apparently the one we went to isn't the best, but I enjoyed it. After a little bit of shopping we were both exhausted and bed was calling us.... after a slize of pizza from Park Avenue Pizza, that is! 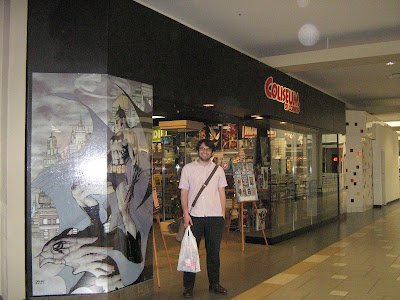 Nic, after buying $40 of comics 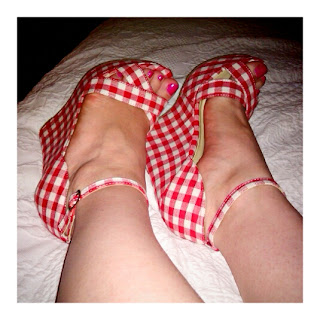 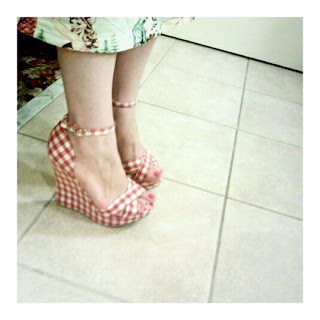 Charlotte Russe Madison sandals - a knockoff of the Schuh Garda wedges that you can see Amber wearing here. 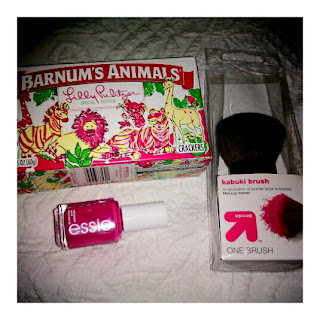 Stuff I bought in Target...

I'm going to let y'all off early for good behaviour and finish off here. Also, there's a hammock waiting for me so I need to go and do some lounging in that. But I'll share photos of the rest of our week soon....