The Foux Du Fa Fa Frock – Me Made May outfit 1

As I type this, the rain has stayed away for nearly a whole day… and although the office air conditioning was cranked up to the max, today seemed like a clement enough day to kick off my Me Made May 2012 challenge with my newly finished Colette Chantilly frock: 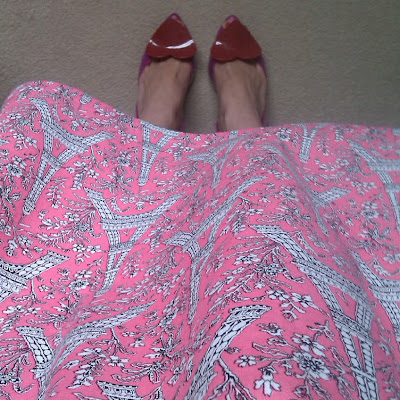 What is there to say about the Chantilly pattern that I haven’t already said? Not much, except that while it is a time consuming and slightly fiddly dress to sew, it’s nonetheless a lovely pattern to work from. Everything is so clear and straightforward, and the dress is just such a joy to wear. 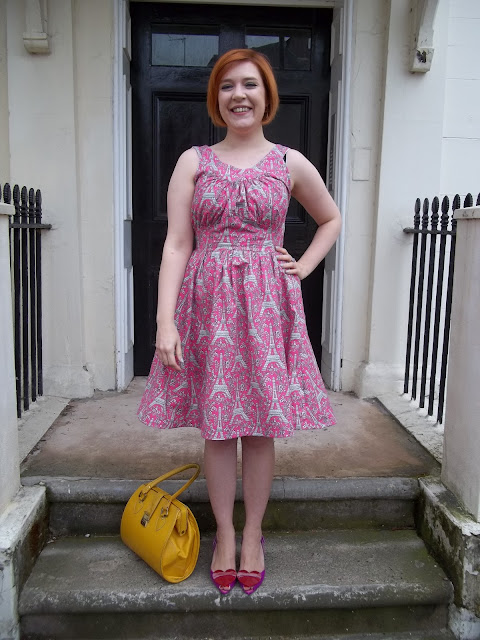 I sewed this over our rainy weekend, with the help of many cups of tea, episodes of Law and Order, and my Flight of the Conchords CD – so this dress will now always be the Foux du Fa Fa Frock! The fabric is Michael Miller from Ditto. There are two gorgeous Bernie Dexter frocks made from this fabric, and after lusting after them from afar for ages I decided to just go for it and order the fabric myself. Of course, me being the dipstick that I am, I totally misremembered the dress and ordered the fabric in the wrong colour. Well, it’s obviously not an issue because I was drawn to the pink. It’s the first time I have worked with Michael Miller fabric and I loved it so much I went on ahead and bought some of the turquoise and red colourway to make another dress with. 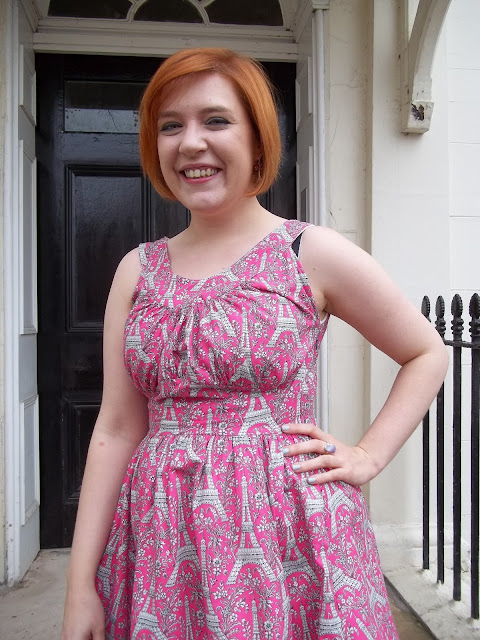 After splurging a bit on the fabric, I decided to economise somewhat by lining the dress with a sheet from Ikea. I’ve done this before and I really like it – the cotton is breathable and easy to work with, as well as being comfortable to wear. The only adjustments I made to the pattern were to omit the pockets and to cut the back neckline piece in two bits rather than on the fold. This was for the sake of efficiency – I managed to just squeeze this dress out of 3 metres of fabric. 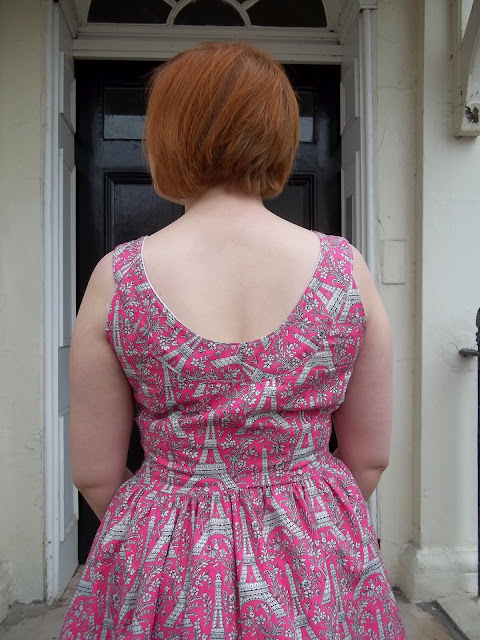 The other thing I did was to hem the dress with contrasting bias tape, into which I sewed horsehair braid: 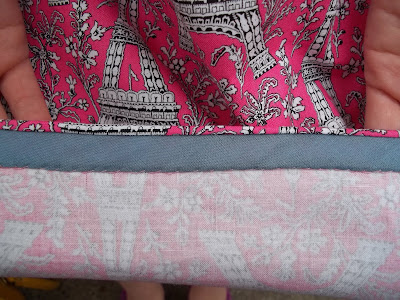 I’ve never worked with horsehair braid before and this ended up being fiddly and time consuming, but quite easy all the same. I sewed the bias binding to the right side of the hem, then pressed it to the inside of the dress. I pinned the bias binding, with the horsehair braid underneath, to the dress and then catch-stitched it all to the inside of the dress. It is fabulous! I just took a notion on Friday afternoon to give it a go and luckily one of the fabric stores in Leamington had some in stock – which surprised me, because often they don’t even have zips! I love the shape it gives to the skirt, and the stiffness at the hem really draws attention to the fabulous print. I have some left over and I’m already plotting what else it can go into!

I wore the dress today to work – partly because I was keen to wear it, partly because my colleague AM has just started sewing and she wanted to see it (hi, AM!) I’m lucky in that, while my colleagues dress fairly conservatively for work, the dress code is smart-casual and they’re used to my more extravagant outfits! There’s rarely an occasion when I don’t want to wear my Vivienne Westwood for Melissa Lady Dragon shoes and, as I looked like a giant cupcake anyway I thought there was no point in under-doing it. I even accessorised with matching Eiffel tower earrings: 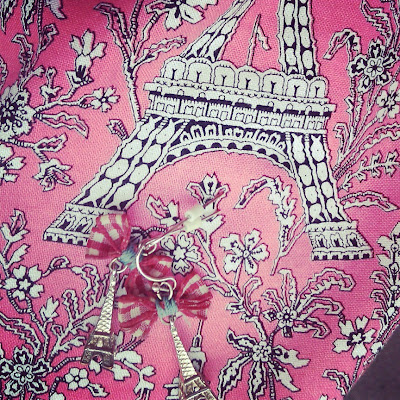 It isn't summer yet, though, so I also wore this with a white cardigan: 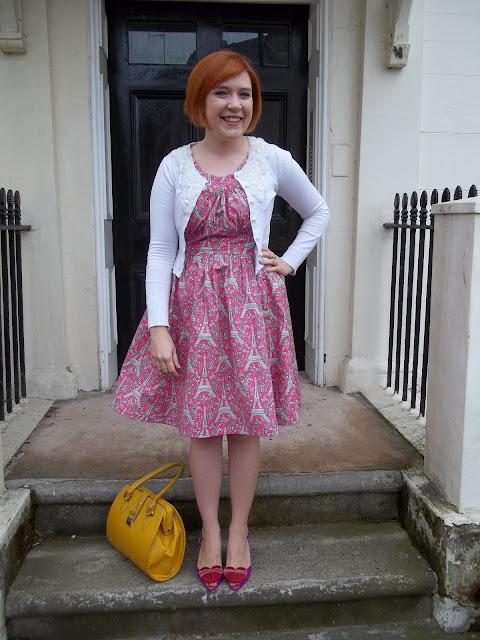 It's frightening to me, how much I look like my daddy in these photos...

What I didn't do today was wear this with a petticoat underneath, as I have done in the past with my other Chantilly dresses. I thought that might be a bit much for work. I did test it out, though, and it looks fabulous. One of our friends is getting married to his beautiful French fiancee in July, and I think I may wear this to that happy event, Eiffel tower earrings and all!

This is the third Chantilly dress I have made, and I reckon I do have another one in me. Not this month, but this pattern is just so lovely to sew from and the dresses so fabulous to wear. If you've been on the fence about getting the pattern, get it!

So, that's my first Me Made outfit of May! My fabric arrived today and is being pre-washed as I type, and I have some sewing time booked in over this long weekend. I'll be back later in the week with some more handmade goodness, but until then I leave you with this...