Has Oscar Wilde come in?

I'm going to have to be upfront here and admit that I have been on a serious gingham binge recently. I think it started when Julia Bobbin gave me a severe case of LOADS with her Peggy Olson dress. My first proper foray into sewing with gingham was my Lonsdale dress, followe by my recent Cambie dress. Hot on its heels is another Simplicity 2444 - the Oh, Jane! dress: 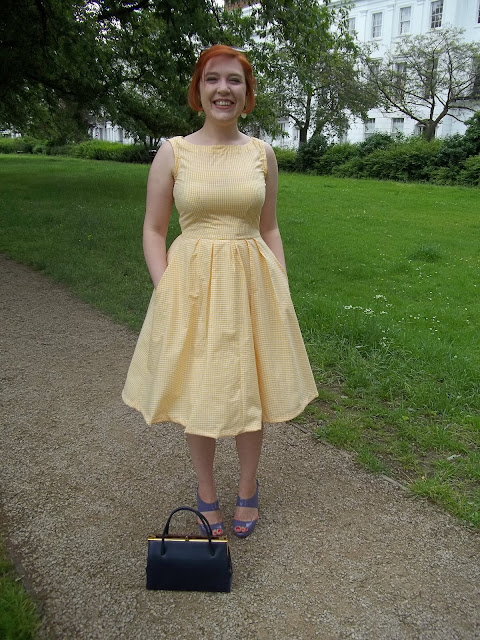 So, I have named this the Oh, Jane! dress after fabulous fellow blogger and friend, Handmade Jane. She's another ginghamoholic and I'm often to be found breathlessly swooning "Oh, Jane!" when she posts about one of her makes. I mean, have a look at her gingham Peony dress. For that matter, have a look at Lauren Lladybird's one as well. Too cute, right? Actually, looking at those again makes me feel a bit less guilty for being obsessed at the moment. So anyway, back to the sewing. I've been wanting to make another 2444 because, as we established during Me Made May, multiples work for me. I will probably make more of this pattern because it really is lovely. 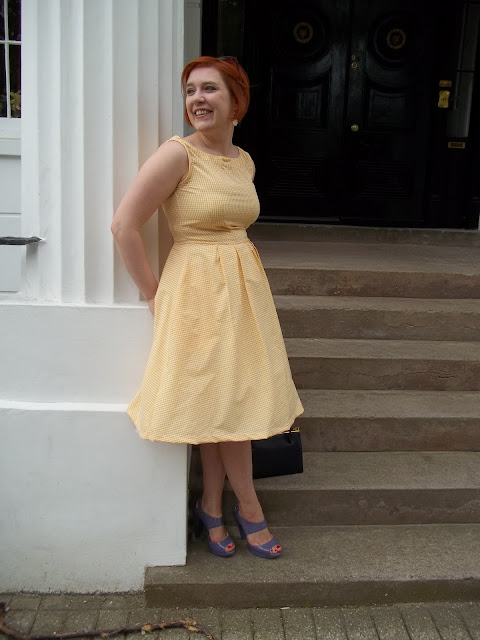 This make was reasonably uneventful. The only thing is that I really could have done with lining the bodice as the poly gingham is quite drapey and I think more body would have been nice. I did briefly consider dismantling the dress and adding lining before deciding I couldn't really be arsed. It's fine as it is - the neckline facing is a bit visible for my liking but to be honest, I'm not hugely invested in making this perfect as it's basically just a fun summer dress. This time around I did cut the skirt front in two pieces so it has a centre seam - to see if it would make the pleating any easier. It did, sort of, but I think that was more to do with having figured out the instructions. This came together very quickly. 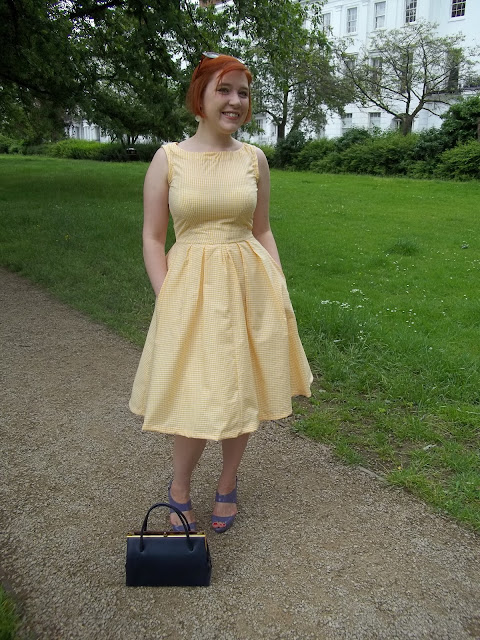 I made poor Nic take about 3,489 photos of me because I was having one of those I HATE MY FACE days on Sunday, and eventually I did get a few that I didn't totally hate. Looking at them now they're grand - the gingham looks a bit wrinkly here but I had been wearing the dress for a fair bit by this point. I did like how I looked in it in real life, so this is definitely a keeper! I'm wearing it in these photos with a petticoat underneath (a la Joanne) but actually, on me, I think it looks a bit better without. Still, I do enjoy being cupcakey every so often.

I definitely have a few more of these dresses in my future. I quite fancy one with sleeves, having seen Miss Dibs's recent version. I also have at least one more gingham dress in me - I have a hankering for a green one. If only the weather would buck its ideas up a little bit so it would be more fun to swan around in these!

So there's another recent make. I'm halfway through another summery frock but have had to take a break from it owing to a sore neck and shoulders, and a bloody annoying cold in the head. In fact, that has sort of characterised the past few days. So, not much craic this way. I'm just hoping these aches and pains jog on before the weekend so I can finish my dress and actually, you know, do stuff. With that in mind, it's time for me to put the laptop down and pick up a glass of wine. Adieu, all - until later!
Posted by Roisin Muldoon