It's a fancy briefcase, because you're classy and important. Like a dude.

Nic is in the kitchen, listening to Scott Walker and doing the washing up - this week has shaken out all right, in the end. It started REALLY badly. Monday was basically the worst day I have ever had at work, and I'm counting the day when I was teaching and two year 11 boys put me in a bin! I can't really get into it here, and I don't really want to talk about work too much, but yow, it was BAD. So every day after that was better by virtue of not being Monday, you know? I'm pleased to have made it to the weekend, to be honest. It was tough.

I was working from home on Friday, on an extremely boring task (but it was nice that it was boring, because it was unstressful) and it was a treat to get out and about for a walk at the end of the day. 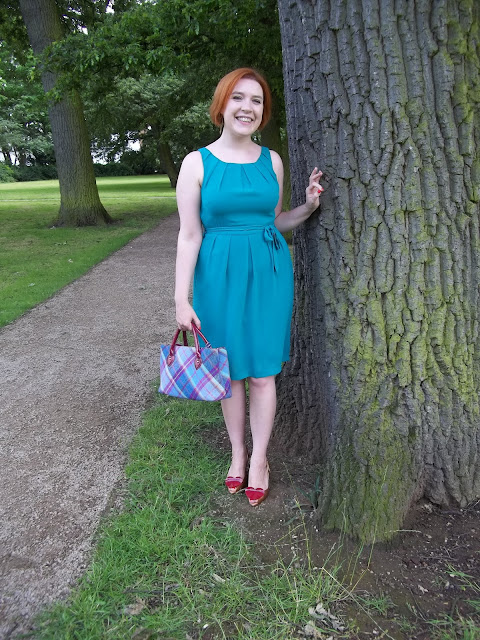 I love the neckline on this dress, and the colour - which is more of a deep jade green in real life - but I'm far less keen on the fabric belt. Anyway, it's good because the dress is nice and smart while being extremely comfortable to wear.

That evening we put on our glad rags and headed to the pub to meet up with Lauren and Andy, and Lysy and The Scientist. It was a beautiful evening and it's always a joy to go to the Somerville, which was recently voted CAMRA's pub of the year in Warwickshire for the second year running. Having decided earlier that day to keep a pair of shoes I'd bought in the Kurt Geiger sale, I thought it was time to wear them out of the house... 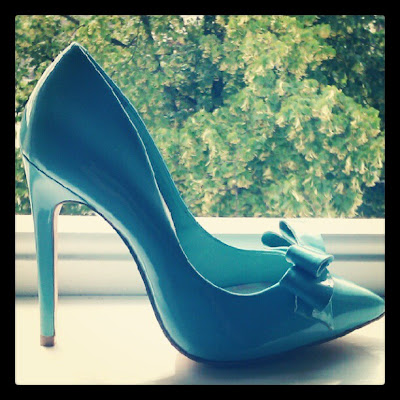 These are like chain letter shoes.... I first saw them when they were featured over at Shoeperwoman and, after I bought them, Char bought a pair too. It's easy to see why though, isn't it? They're so pretty. I decided to wear them with one of my beautiful Bettie Page dresses: 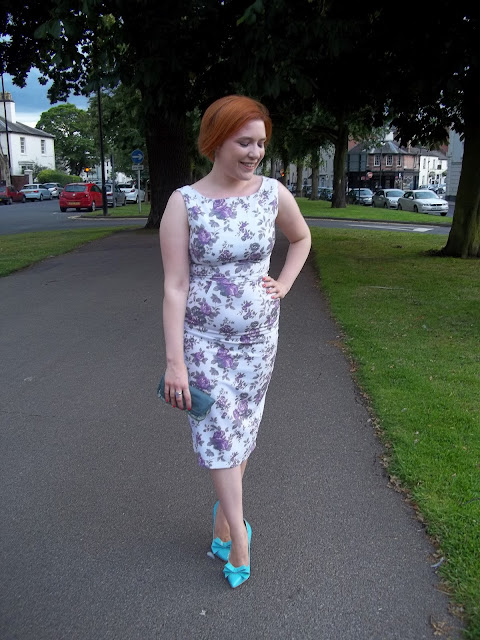 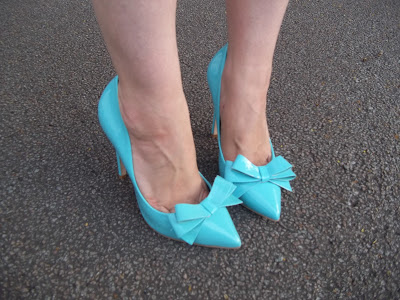 These shoes are adorable but they're going to need some taming. I only wore them to the pub and back and they rubbed the shit out of my feet. It's been ages since shoes hurt my feet but these did the job! They'll be fine when I've worn them a few times, and it was nothing I couldn't handle, but a surprise all the same. Sore wee feet aside, Friday night was marvellous. It was so good to spend time with my friends in the pub and, as we were getting ready to leave, Uncle V, our friend W and Shanade and Leo arrived so we stayed on. It ended up being a pretty late, but very fun night.

Nic and I had made plans on Saturday to visit Birmingham with Lysy and The Scientist. Birmingham Jazz Festival was on, and it was sharing a venue with Birmingham Food Festival, and the sun came out! A stage had been set up in Victoria Square for live jazz and blues, and some of the city's many restaurants were offering taster plates of their dishes. It was so much fun, eating tasty food and listening to jazz in the sunshine in beautiful Victoria Square. 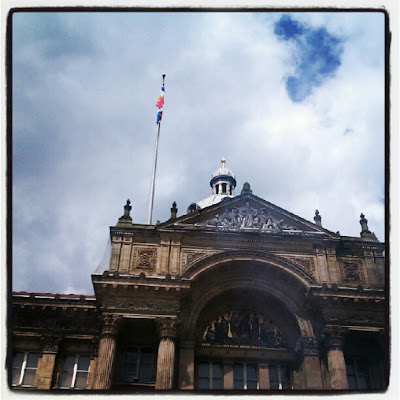 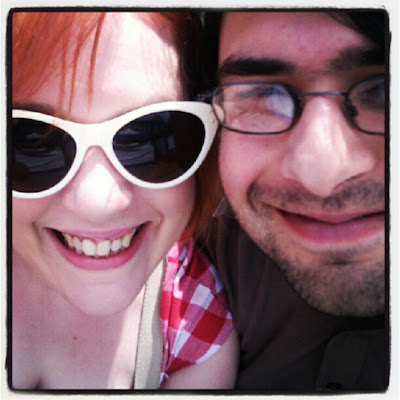 Jazz fans. You can just see my red gingham Cambie dress peeping out in this photo

While Nic and The Scientist browsed in Nostalgia and Comics, Lysy and I visited the Rag Market and Fancy Silk Stores. I was very good and didn't buy fabric for myself but I did stock up on zips and notions, and treated myself to Butterick 5603 as it was on sale. I don't have plans for it yet in terms of fabric, but I think it's going to be an interesting make. I also bought loads of fruit and veg at the market, so by the time Nic and I had lugged it all home I was only really fit for a lazy evening with a DVD and dinner.

It was more free music today, this time at a free music festival in the nearby Dell. Sadly the weather wasn't the best, but the music was excellent. Bath Place were running the food, lots of our friends were there, and it was just a lovely, relaxed way to spend the afternoon. 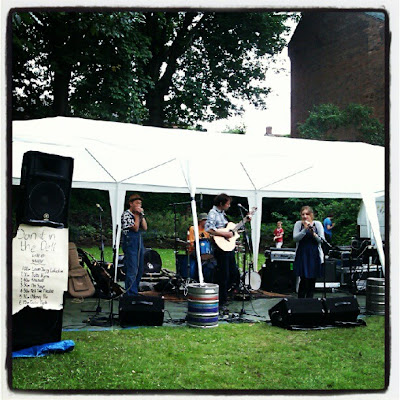 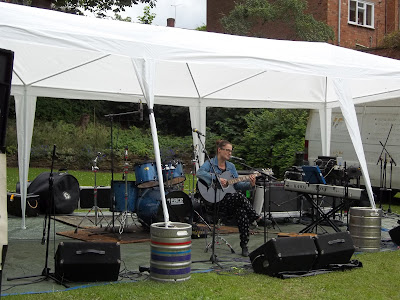 I'm still willing on the summer, and dressed accordingly. Luckily, it wasn't too cold: 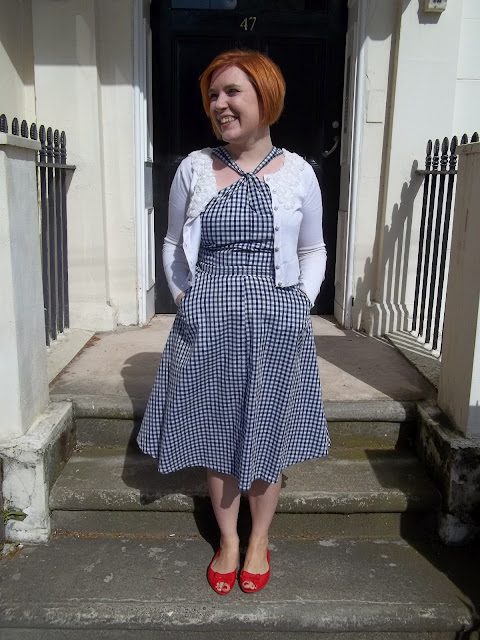 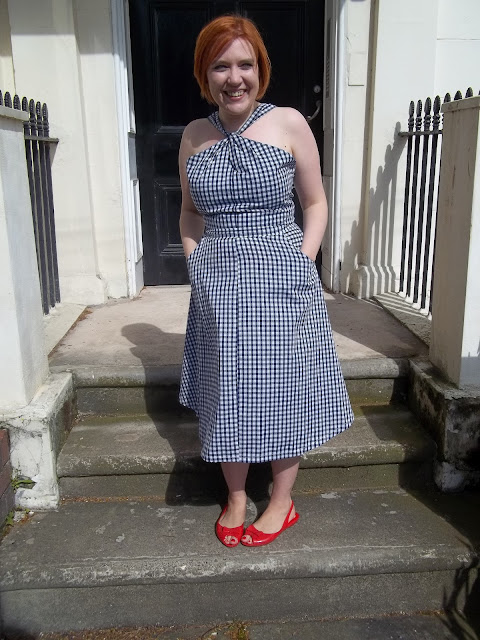 And without the cardigan, but with an awkward facial expression. You can't win 'em all...

It's been a brilliant weekend and I do feel revived for the week ahead. I know work is going to continue to be work, but unlike the last time when work was really bad, everything else in my life is excellent. This gives me the strength to get through the shitty days! You can't say fairer than that, really. Now, Nic is just serving up the dinner (spicy veggie sausage and spaghetti - YUM) and we're settling down to try out Justified, so I'm out of here. I'm going to leave you with a photo of the beautiful double rainbow Nic and I could see from our flat the other night. Later x 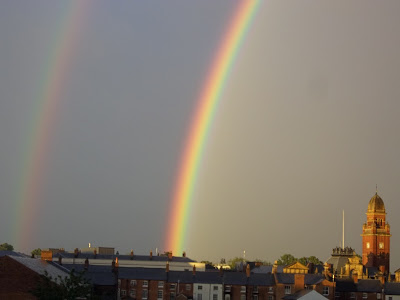