They have horse riding as well. I remember I did it last year. Well it wasn't really a horse, it was actually this oul fella. He couldn't go very fast so I had to hit him with the whip a few times.

Hello everyone! I had a wee bit of an unscheduled break there as the wifi in my parents' house isn't the best, and of course I was up to all sorts of excitement in the vibrant holiday resort of Dungannon. OKAY NOT REALLY. It rained a lot while Nic and I were at home, but then it wouldn't be a Northern Irish summer if the view out the window wasn't this one: 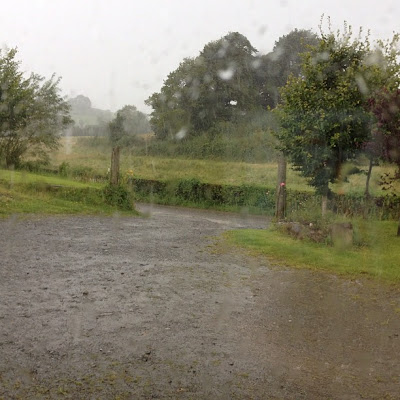 Still though, it was grand. It took a few days to recover from the wedding itself - we basically spent all of Sunday and most of Monday in hibernation. The sound of the rain drumming on the roof was actually sort of restful for that! On Monday afternoon we did decide to go out for a dander in town and to visit my grandma and a family friend. Thankfully the rain cleared off for a bit and I wore a new dress I'd bought in Dungannon a few days earlier. Like I hadn't packed enough dresses, right? 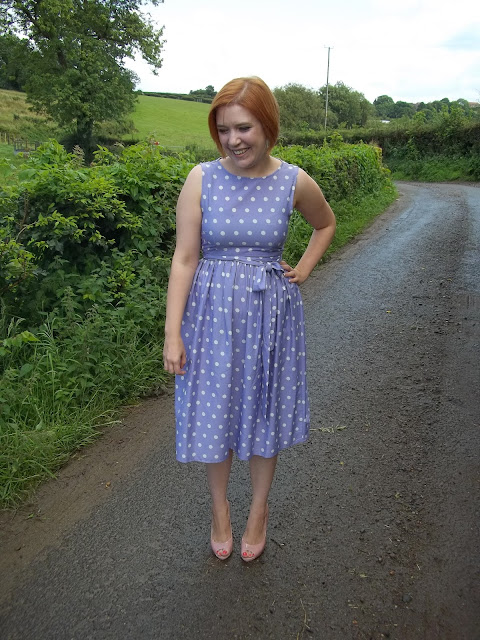 Yes, I'm ready to chair my first meeting as president of the Midlands branch of Polka Dot Lovers Anonymous. And no, I didn't walk into town in those heels. That's just the road outside my parents' house. The dog did think he was getting to go for a walk, though: 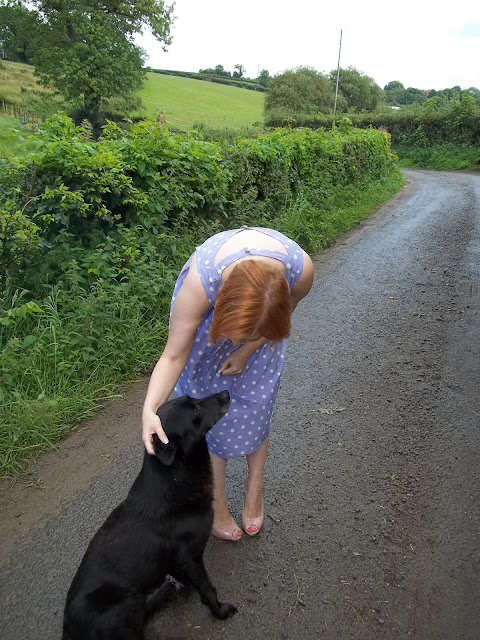 "Sorry, Paddy. These are not dog-walking shoes."

Of course the big galoot jumped up and got muddy paw marks on me, but who can blame him? It is a nice dress. My wee granny loved it too, and it sent her off into a reverie about how much she loved clothes when she was a young married woman. I didn't lick it off the road, did I?

We had a bit more excitement on Tuesday with a day out planned in Belfast. The idea was to catch up with my friend Emma and then go for a tour around the new Titanic Centre. I bought these crisps specially to get the voucher: 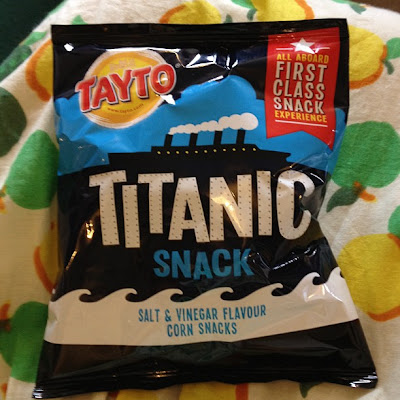 Bad Taste Crisps. They were really tasty, though. And anchor shaped!

That didn't go quite to plan, as the Titanic thing was all sold out. That was maybe for the best though, as Emma's review of it was less than positive, and so was baby sister's (she visited later in the week) Still, it never fails to amuse me how weirdly proud Northern Ireland is of the Titanic. And of the Delorean. Yeah. Anyway, we had a fabulous, Titanic-free day in Belfast, starting by meeting Emma and her new wee man Dexter for a coffee in Clement's on Botanic. 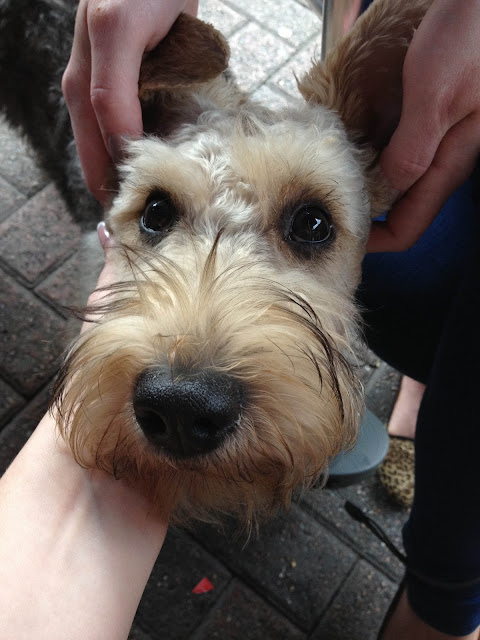 The weather stayed pleasant long enough for us to have our coffee outside and a turn around the Botanic Gardens before popping into the Ulster Museum: 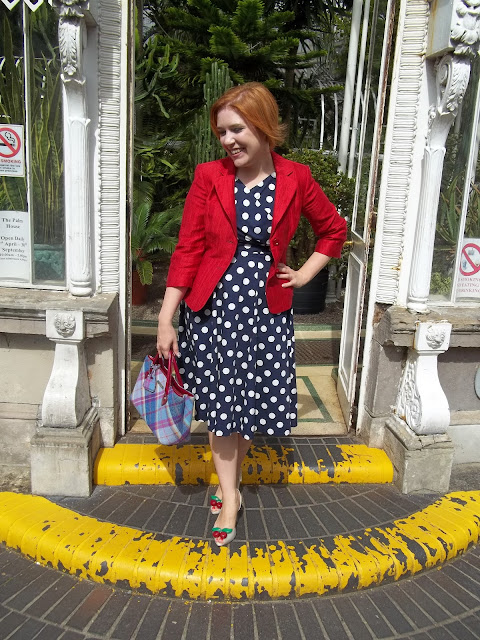 The little red jacket here was a gift from my mum. She wore it to Kelly's wedding and, as I had admired it, she gave it to me. I'm very spoiled because she also gave me a lovely coat - obviously the key to raiding my mum's wardrobe is to say complimentary things about the contents of it. Sadly the weather took a turn for the worse shortly after this photo and we got caught in a thunderstorm, and were forced to take shelter in Auntie Annie's. This was fine and I was amused to find that Belfast was keeping it classy as always - on sale in the vending machine in the ladies, along with chewing gum, condoms and tampons, you could buy both vibrators and knickers. Knickers!

Thankfully Belfast does have classier spots than Auntie Annie's and, after lunch in Little Wing and a poke around Atomic Collectables, Nic and I took ourselves along to The Merchant Hotel on Skipper Street for some cocktails. The cocktail bar is apparently the 'world's best cocktail bar' and it's easy to see why, it is absolutely gorgeous: 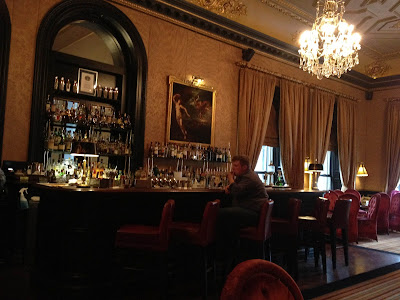 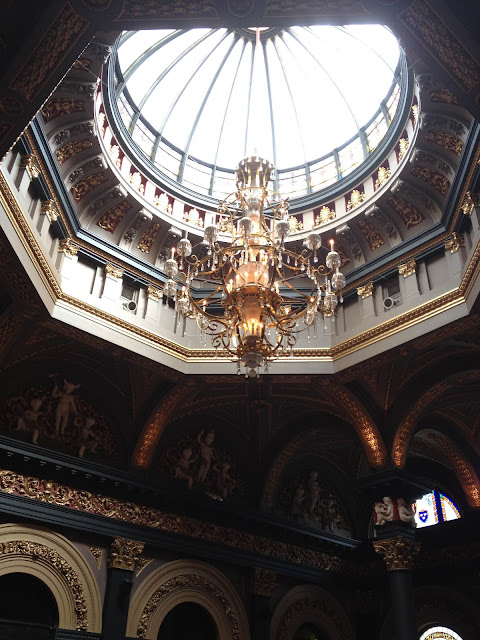 The Merchant's cocktail menu isn't just a menu, it's an entire book, which Nic and I enjoyed reading through while we sampled some of the delicious (and complimentary) bar snacks. We both opted to stay classic, I had a Sloe Gin Fizz and Nic a Dry Martini. We also ordered the selection of mini cakes: 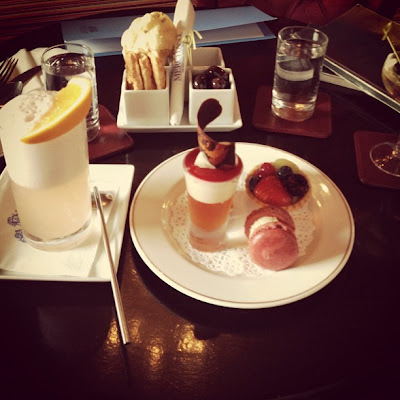 Mini cakes included a trifle, a fruit tart, a raspberry macaron and a profiterole swan, which you can't see in this photo. 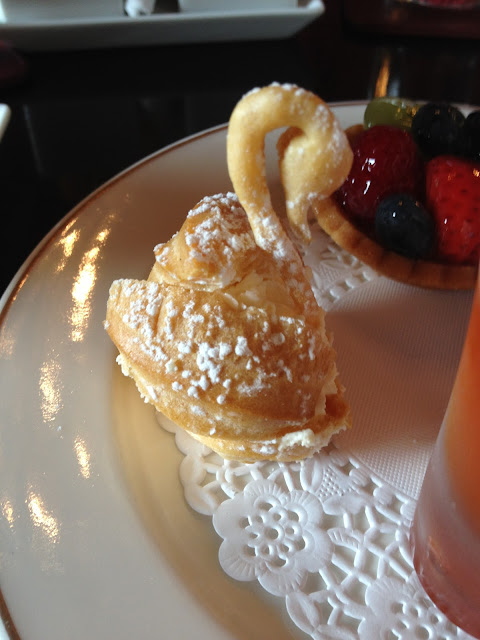 Profiterole Swan! This is their speciality, apparently.

The Merchant is so beautiful. Emma and Adrian got married there on New Year's Eve and we plan to have dinner there together when I'm next home - so I'm starting to save up! It was a really fun and elegant way to spend the afternoon. 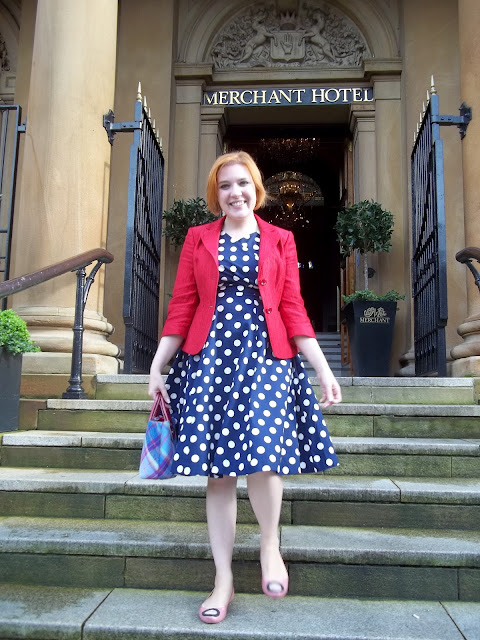 Now I don't want you thinking I'm all classy and sophisticated all of a sudden, because that would be false. I might have spent an hour or two in a classy establishment, but I still found this item and took this photograph in Poundland: 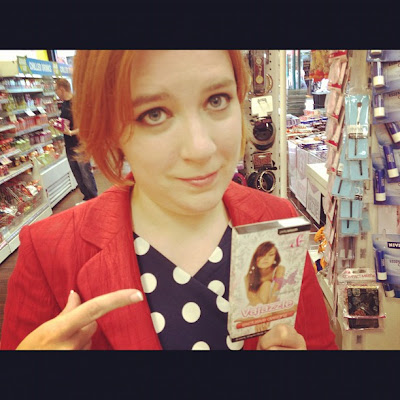 In case you can't read that, it's a home vajazzle kit. A HOME VAJAZZLE KIT FOR A POUND. Because Poundland glue and sequins is what you want to be getting near your junk, right? I honestly don't think I can think of many things bleaker than this. Well, maybe apart from a Poundland Pejazzle kit, but they didn't have those. Oh and before you ask, no I didn't buy it. That is a disapproving face up there. It'll likely be more of a disapproving badger face when I see the search terms including the words vajazzle and pejazzle that bring people to this blog.

Anyhoo, that was our day out in Belfast. It was time to catch the bus home, get the jammies on and eat toast. And that's your lot from me this evening. I know when I've peaked, and that's with a home vajazzle kit and Titanic-themed crips. I'll tell you more about the rest of our holiday later in the week.
Posted by Roisin Muldoon