Hi, are there any local companies that rent anti-gravity machines?

So, two posts in two days and all, YO. It's still sunny here in the midlands and I chipped off work a wee bit early today and joined Nic and our friend Uncle* Viv in the pub (*not really our uncle) so I'm mildly pissed, awaiting my dinner and all Thursday evening happy. I love Thursday night, even when I'm in the office on Friday rather than working from home - it's the delightful anticipation of a weekend of fun, I suppose! So I apologise in advance if I slabber a bit but to be honest it'll probably be fairly indistinguishable from what you usually get around here.

So, first order of business. The tiny door in the skirting board at Denise's house. A few of you asked about this. I realise I was remiss in posting a photo of this yesterday - I did have one, but it was on my phone and Nic was using my phone at the time of writing. But here it is: 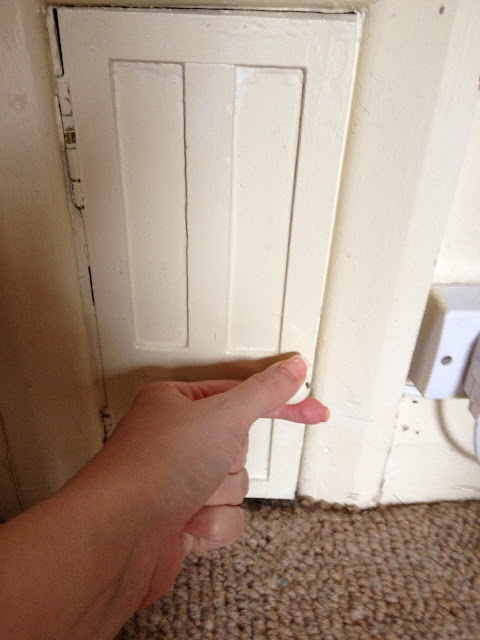 With my hand, for scale. And inside? Nothing to do with Nigel, and sadly not the entrance to Narnia... but instead, a little doorway into the cavity and the stopcock. Mundane, but for the meticulous construction of the door itself and the fact that it had a doorknob but the other household doors did not.

Anyway, in previous blog posts I also promised you more doggies, and there is one coming up further down the page, honestly. On Friday afternoon Nic and I hopped on a train down to Kent, to spend the weekend with his parents and brother. I'd totally forgotten that the fast train to Folkestone is also the 'Javelin Train' to the Olympic Park but no need to worry, it wasn't horrendously crowded. I worked from home during the day and paraded around in a pretty dress NO CHANGE THERE: 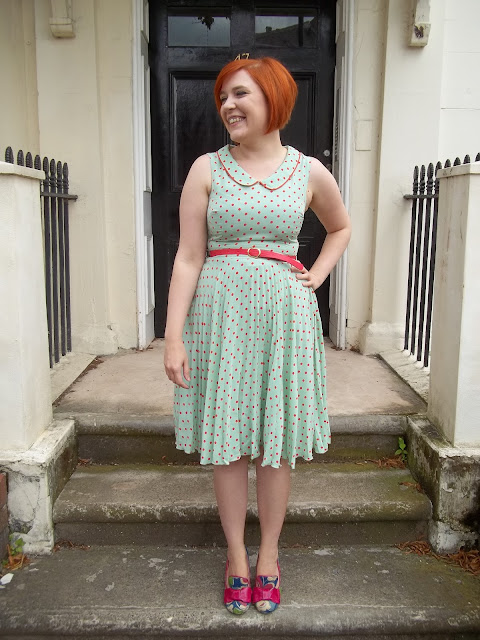 I've had my eye on this dress for a good long while and then it popped up on my old el cheapo radar on amazon. So yeah. I think I got a good deal there too because it's really beautifully made and usually I hate when belts come with dresses because they're often nastay, but this one is really nice! Louche is a brand that I only became aware of last autumn when Nic bought me one of their frocks, but they're one to watch, I think!

Anyway, yeah, the weekend. I was ridiculously excited about getting to the seaside. It was quite late by the time we got to Nic's parents' house but we were out and about early on Saturday morning as we were going to visit his grandparents. It was so nice to be by the sea: 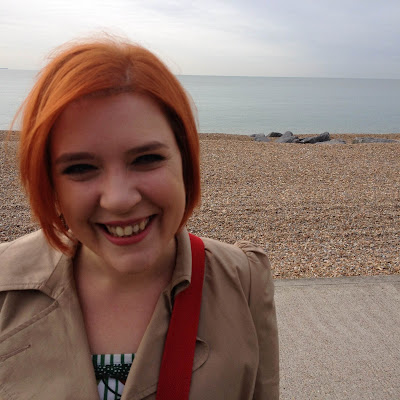 We had no grand plans beyond seeing family and enjoying the sea air. We had missed the annual Sandgate Festival by a weekend and, as it had been rained off the previous week, we were treated to the firework display on Saturday night instead. It was good. It was short - and I mean, like, below ten minutes, but the night was mild and the moon was beautiful: 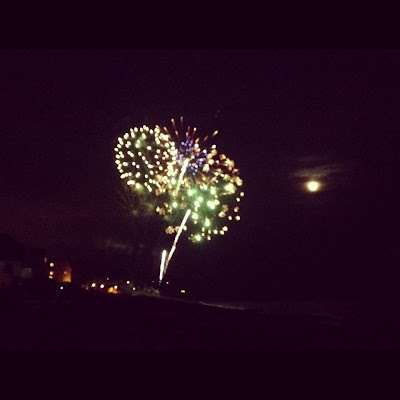 Fireworks on the beach

We finished the evening off with chips on the seafront, watching the light of the lighthouse at Dungeness and listening to the sound of the sea.

We had to get away reasonably early on Sunday to get back up to Leamington. All the sea air was turning Nic a bit screwy: 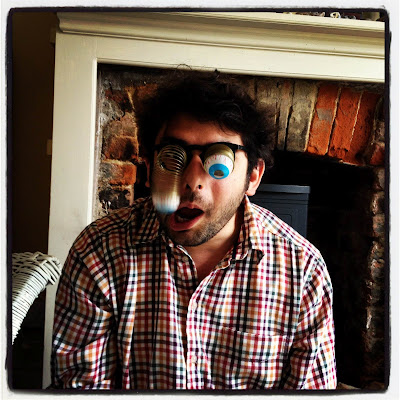 We stopped in London on the way back up, so that Nic could have a wee look in Orbital Comics and we could have a wee dander around Soho. Nic bought a few comics and while he was browsing I was entertaining myself with Krypto the SuperDog: 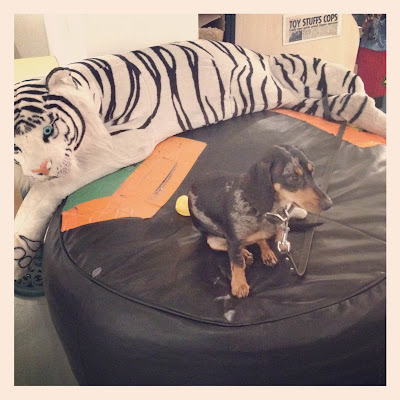 She was such a good wee dog, and dascshunds are my favourites! She belongs to the owner and very cheerfully submitted to lots of fussing. We had a wander up through Soho and I had a look in Joy but kept my purse in my bag. I did raise an eyebrow at their unusual homewares display: 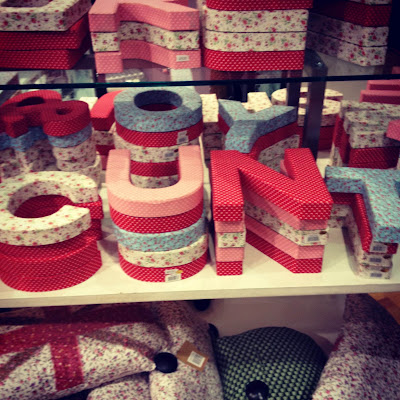 I should say that I didn't make this arrangement. I was looking at the nearby cards when my eye fell on this - but it did bring a chuckle to my Sunday!

Nic and I weren't fit for much on Sunday night past getting into bed with dinner, cupcakes and our books. I was working from home on Monday though, so at least I didn't have to get up very early. I had an industrious day and received two exciting courier deliveries - one bearing this: 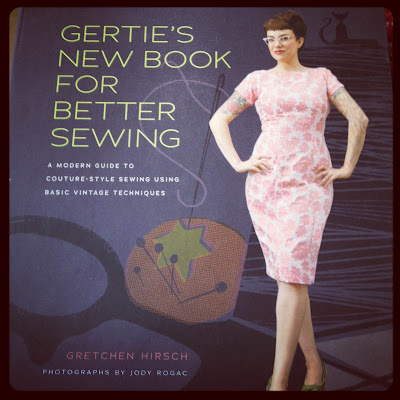 This book is THE BOMB. It's got me really excited about some of the sewing projects I can get working on over the autumn, probably starting with this one before the weather gets too cold: 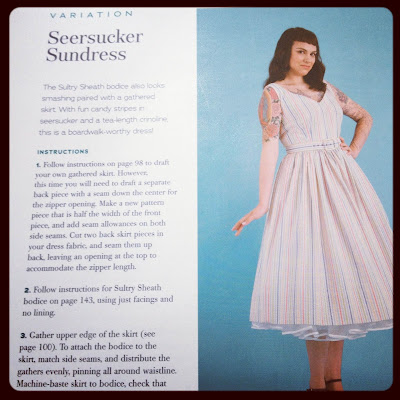 I got out into the sunshine for a little walk in the afternoon with Nic, and to run a few errands. It was really warm! 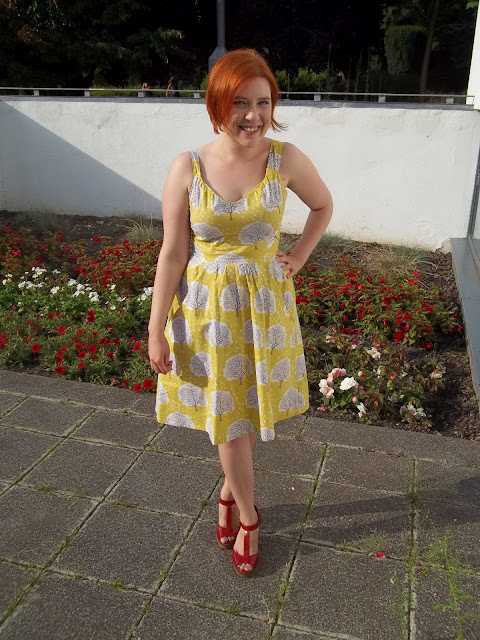 'Majestic Oak' Simplicity 2591 and red wedges from Primark via ebay

Taking part in Me Made May rescued this dress from its rarely worn status - wearing it then made me realise how much I like it, despite a few issues with it. I'm sure I'll wear it again through the autumn, too. It was just right for such a hot day on Monday - a hot day where I didn't have to worry about the MAXIMUM CHILL of the office airconditioning.

Anyway, that's me all caught up. Tomorrow I'm working in London and joining Karen and many others at the V&A and I have fun plans for Saturday, too. I'll see you on the other side!