Right Ted, the way the Phantom of the Opera doesn't exist. 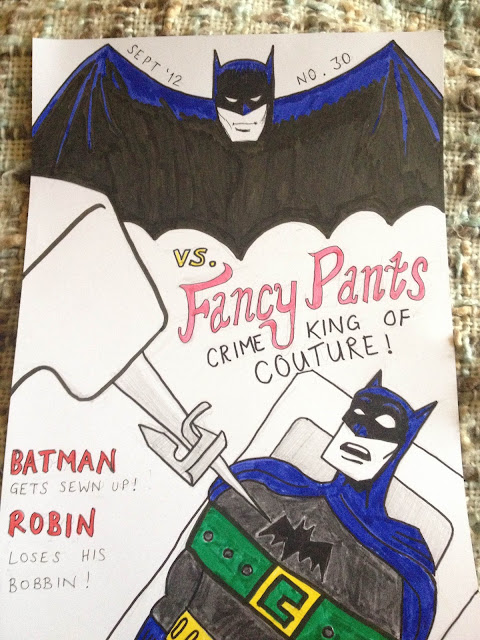 A little picture just to kick things off with - this was my birthday card from Nic, based on a Batman story I made up for him!

Afternoon all, and happy Friday! This week really does feel like it has crawled by... but it's the weeked at last and I have a few lovely things planned. I'm away out soon to start the weekend off right, but there were a few things I wanted to catch you all up on.

First thing is to say thank you to all of you who commented on my last post about my frustrations at work. I don't like to think of you guys going through something similar, but I'm grateful for your understanding. I've felt too depressed about it up until now to do something about it, but I have been looking for other jobs and doing other things to make work less stressful. I hope it works!

Secondly is to thank all of you who took the time to comment on my post about The Angels Take Manhattan. You all really gave me something to think about! I wrote a letter of complaint to the BBC about it and yesterday I received this reply:

Dear Ms Muldoon
Thank you for contacting us regarding 'Doctor Who', broadcast on 29 September on BBC One.

We understand you felt a scene showing the characters Amy and Rory jumping off a building was irresponsible. We raised your concerns with the production team.

The scene where Amy and Rory were on the roof was about them taking a leap of faith; believing in each other. When they’re on the roof the dialogue is clear that they believe they will survive if they jump as it would create a paradox. Amy wouldn’t let Rory do it without her as a show of love and commitment, as a symbol of their marriage. Although they were scared they had faith in what would happen. The surreal nature of their descent underscored the fact that they had not actually jumped from a high building, and were not plummeting to their deaths.

We see Amy and Rory in a subsequent scene and they are both very much alive, having defeated the Angels.

Nevertheless, we appreciate how strongly you feel on this matter and we're guided by our audience feedback, so we’d like to assure you that your complaint has been registered on our audience log. This is an internal report of audience feedback that we compile on a daily basis and it’s made available to programme commissioners, channel executives and senior management.

The audience logs are seen as important documents that can help shape decisions about future programming and content.

Thanks once again for taking the time to contact us.

Now, I am grateful and all for the reply. I don't know how seriously they really do take this audience log, but I think it's a good thing that my concern was brought to the attention of the Doctor Who production team. However, and it's a big however, this response doesn't really address my concerns. I don't really need the BBC to explain the narrative reasons for the suicide to me - I watched the programme so, you know, I get that. But a child might not get that it is 'surreal' and see only the very vivid imagery of two people jumping from the top of a tall building to their deaths. And honestly, I totally disagree with the claim that Rory and Amy had not actually plummeted to their deaths - the narrative makes it clear that they had as the paradox would not have been broken if they hadn't died! I am considering whether to reply that I still think that the imagery and the presentation of the suicide is irresponsible given that Doctor Who is a children's television programme and that even if it is narratively justfied (which I don't think it is, really) that the imagery romanticised suicide and this is potentially harmful. I don't know what difference it would make, though! Let me know what you think of their response in the comments - I'm tentatively writing up my response.

Finally just to finish it all off, here's a wee outfit shot from a few weeks ago... 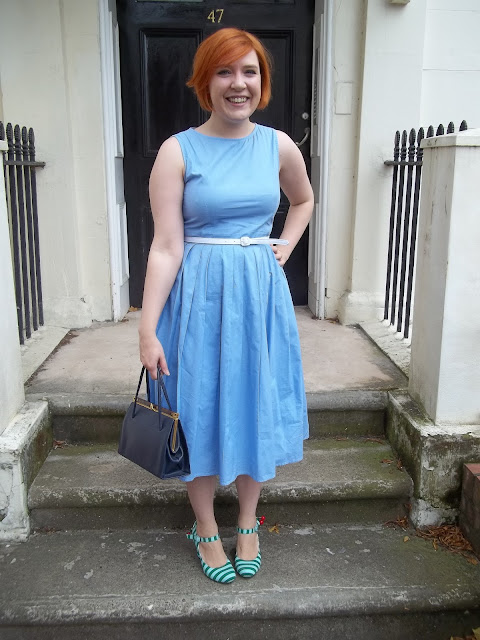 I confess, I'm a big ol copy-cat. I saw this dress on Amber months ago. It was from ASOS and already sold out, but when one in white popped up on ebay I bought it and a box of Dylon China Blue dye and BAM! Blue midi dress. It came out a darker shade of blue than Amber's dress and the self-covered belt that came with it didn't survive the dyeing process but I'm pretty happy with the finished article. It's a nice dress but I have to say, I would be reluctant to pay full price for an ASOS own brand dress (I didn't for this one) - the quality of this isn't brilliant and the fabric wrinkles like crazy. But for an ebay cheapy I'm pretty happy. I wore it with these Poetic Licence shoes that don't actually match (but sure when has that stopped me before) 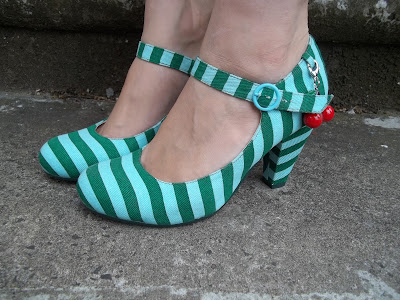 These were insanely cheap on amazon and when I instagrammed a picture of them, Karen commented to say that it was like a shoe designer somehow got inside my head! She kind of has a point - especially the combination of stripes and the cherries you can see just behind the strap. Of course these are highly impractical for the coming winter but I'll wear them again come Spring!

And now it's Friday and I'm off. I'll see you all around the way.
Posted by Roisin Muldoon