Well Father, you've got 4 out of 5 questions right on your specialist subject, William Shatner's 'Tek Wars'.

Evening all! Well this week has been a busy one, I was starting to doubt that Thursday evening was ever going to roll round. It usually feels like the start of the weekend for me as I work at home most Fridays - I'm always kept pretty busy but it doesn't feel so bad when I'm in my living room!

Anyway, Thursday evening it is and I am pleased (as you no doubt are, too) that I managed to get through 80% of my work week without swinging for someone. No mean feat at the moment. What has helped, though, is I decided to go from being a member of our union to a rep for our union. I figure I might as well use my anger for the greater good. It makes me feel more empowered - which is a good thing. Work is as it ever is this week, and the delightful spoonful of sugar has been discovering that the floor I work on has an infestation of fleas. FLEAS. They're the reason I came home from work yesterday with a lot of bites around my ankles. So that's delightful, especially as our building is not even three years old yet. Not content to suck the life out of us, our workplace is now sucking the actual blood out of us. Heh.

Still it's been a decent week and last weekend was gorgeous, too. It was our dear friend The Rev's birthday last week so on Friday night Nic and I joined him and a few friends for dinner at Cosmo in Coventry.  Cosmo is quite ridiculously awesome for both the range of food on offer and the quality of that food. It helps also that it's pretty bonkers - alongside really good dim sum and amazing sushi and almost anything else you'll think of, they have bowls of wotsits and frazzles. At the desserts, as well as every variety of cheesecake you can think of, they have bowls of rainbow drops and banana custard! It makes for a very entertaining evening, but you really do have to have a strategy when it comes to pacing yourself. I think we all acquitted ourselves marvellously but I was full for most of the following day. After a painfully slow bus journey back to Leamington we were in time for a last few drinks in the Somerville before home to bed.

Nic and I headed out for breakfast on Saturday morning with Lysy and The Scientist to the newly refurbished Star and Garter. 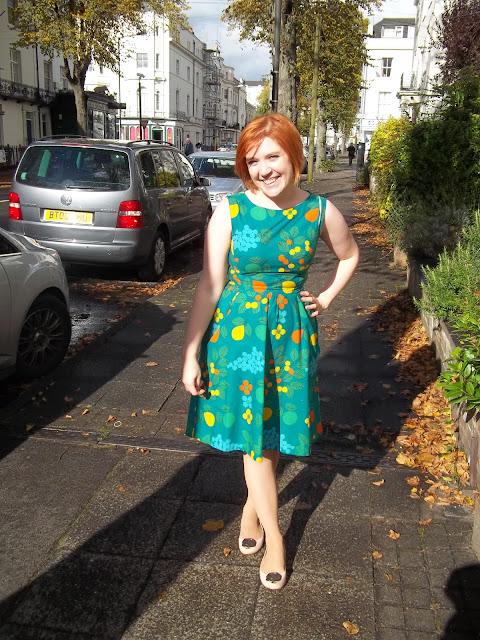 I haven't been into the Star and Garter for years - ever since seeing a rat in there a number of years back I haven't been keen to revisit it. Well the rat was one thing, but it was the totally laissez-faire attitude of the former landlord that threw me. After establishing that it wasn't merely a mouse (yeah because that's any better) he told me "Ah well they come over from the garages across the street. They usually look around and then leave"  - yeah. That place served food, so I didn't go back. But seeing as it has changed hands and Lysy spoke so highly of it, and they do free toast if you buy a drink in the morning, I was willing to forget my memories of rats. It's very nice indeed now. I mean, I could live without all of the 'keep calm' twee and the posters of Churchill and all, but they've kept a lot of the pub's original charm and added some lovely features, too. And, free toast. And no rats, none that I could see anyway.

We spent the rest of the afternoon running errands and doing stuff around the house, and dodging the rainstorms. It was a relaxing and uneventful Saturday.

Sunday was much the same - some grocery shopping and pottering around during the day gave way to watching a film in the afternoon. 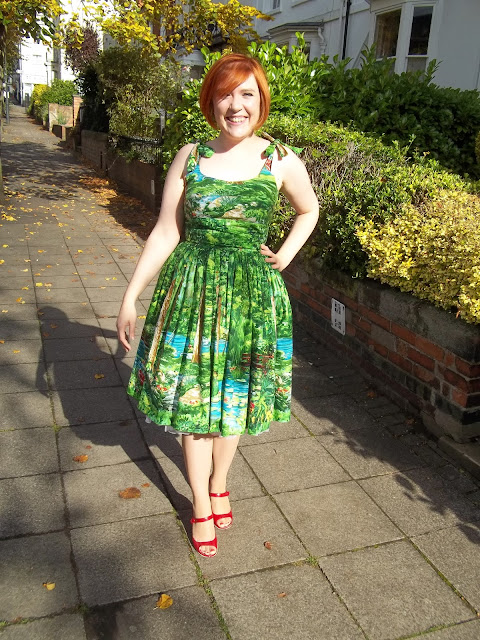 I bought this gorgeous Bernie Dexter dress on ebay last week after selling a couple of things, so it basically cost me nothing. I have been curious about the quality of Bernie Dexter's clothing for a while but there are so few UK stockists and I was too nervous to buy one online from America. So when this one - which, coincidentally was in the print I was most keen to get hold of - showed up on ebay in my size I may have done a little squirm of joy. It is GORGEOUS (and in fact I am also wearing it right now) Bernie Dexter dresses are priced a little lower than some of the other repro vintage brands such as Stop Staring or Bettie Page, and I think it's because the Bernie Dexter dresses are made from cotton rather than bengaline. But that's really the only difference - the quality of this dress is really lovely and the fabrics are so gorgeous - Bernie Dexter also produces dresses made from prints by Alexander Henry and Michael Miller so I can see they're worth the money. If I had a bit of spare cash right now I'd go for this one: 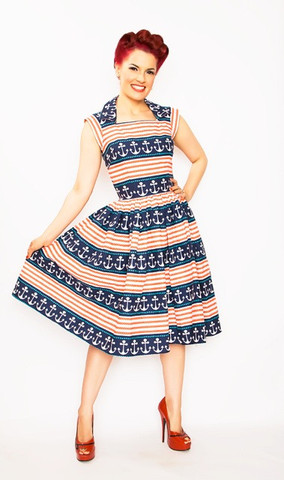 One of the things that I love so much about the Happy Valley dress is the border print - there is just so much to look at! Also it reminds me so much of our holiday in Orlando earlier this year - the greenery on the dress is very much like beautiful Lake Lily in Maitland: 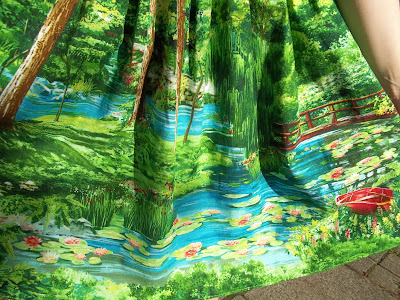 Of course it was much too cold to wander round in a sundress, so I did cover up with a cardigan... 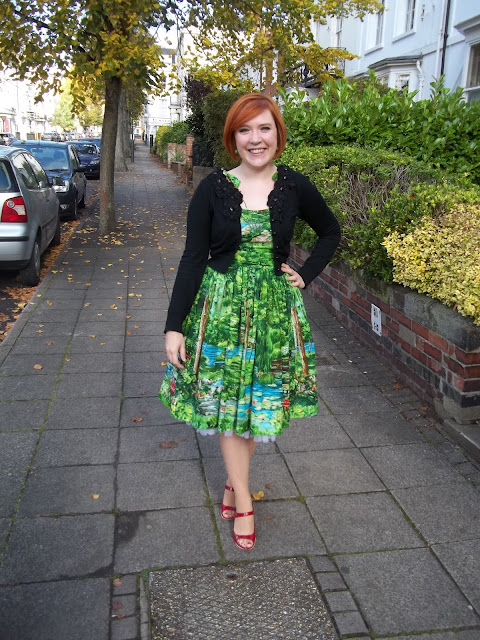 In the afternoon we watched Pretty Woman, which Nic was teaching this week. I hadn't seen it for some years and I very much enjoyed it, despite my reservations about the whole story. Richard Gere is very good at playing the total creeper that buys a woman and I'm not sure if the movie isn't deliberately encouraging the viewer to see him as a creep. It certainly had me shouting at the television!

This weekend I have a friend coming to visit, I'm meeting up with a sewing friend, and we are celebrating another birthday. It's going to be a busy one indeed, and I am very much looking forward to it! And with that, I will leave you. I'm going out for a walk. To the chip shop. I have been sewing, though, so look out for a post about that coming soon. Anyway. Chips....
Posted by Roisin Muldoon