Beauty doesn't last forever. It can be blown off your head.

Hello all! It's been quiet round here because I was ill for most of last week. Nothing that serious - and nothing serious enough to keep me off work - but a cold and sinusitis that made me feel pretty crappy. I am feeling a LOT better now, though. I had a busy week at work but I took Friday off and that extra day has just made me feel so relaxed and cheerful. I should try to do it more often. Nic was working on Friday morning so I spent a few hours sewing while watching (and crabbing about) Kirstie's Vintage Home. I knew from my twitter feed that I'd find it fairly unbearable, and I did. I won't get into it too deeply here but I'm always surprised by the seemingly endless appetite the British public have for being bossed about by posh people. It also kind of explains the appeal of Downton Abbey, which has totally passed me by.

Anyway, back to the sewing. My lovely friend Lucy bought herself some of the Michael Miller Springtime in Paris fabric and asked me would I make her a dress out of it. I don't often indulge in unselfish sewing, but I am pleased to do it for Lucy. After some deliberation we decided to go for a Retro Butterick pattern - B5748: 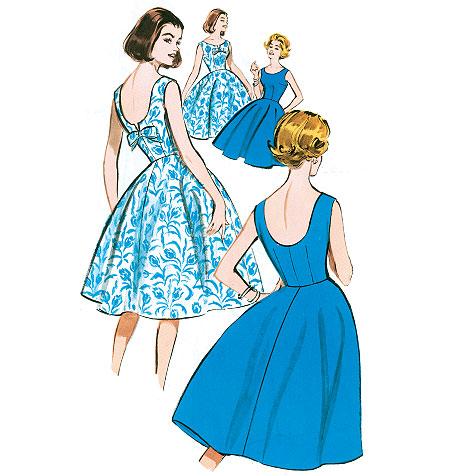 Now these ladies aren't as sassy as the ones on the sleeve of B5603 and, I confess, I found myself strangely disappointed that the styling on the Butterick website wasn't totally wacko. It's a bit frumpy but not too bad: 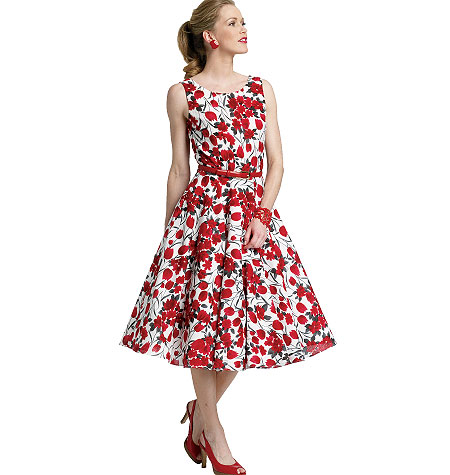 I know, it's all right, isn't it? Don't feel bad, though. Check out how gloriously WTF the styling of B5708 is: 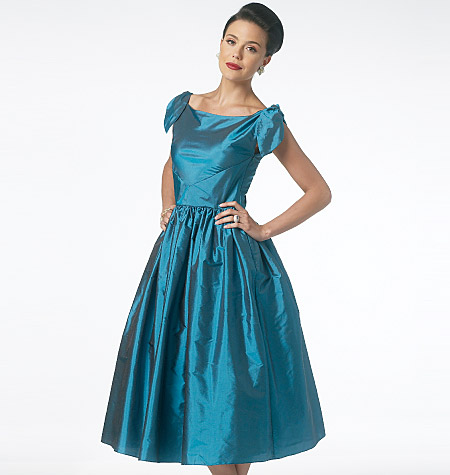 Ha! I actually do have this pattern, having scored it at the swap. This picture made me laugh so much I had to stuff my sleeve in my mouth. LOOK AT HER FACE! She is so unimpressed, but then who could blame her. I'd be afraid of getting too close to any naked flames in that monstrosity.

Anyway, yeah, back to the sewing. I thought I'd testdrive the pattern by making something for myself before I cut into Lucy's fabric, so I got out the Matroyshka print cotton I bought last week at the rag market meetup. The pattern itself looked pretty straightforward and I love the fact there are only four pattern pieces. But it took me ages to cut it out! The skirt is a full circle skirt and my fabric has a vertical repeating pattern so I had to do all sorts of jiggerypokery to get it to fit on the fabric with the print running the right way. I had enough fabric but I did have to cut the skirt shorter than the pattern pieces to fit it all in. Mind you, on a retro pattern this isn't much of an issue as the skirts are pretty long. 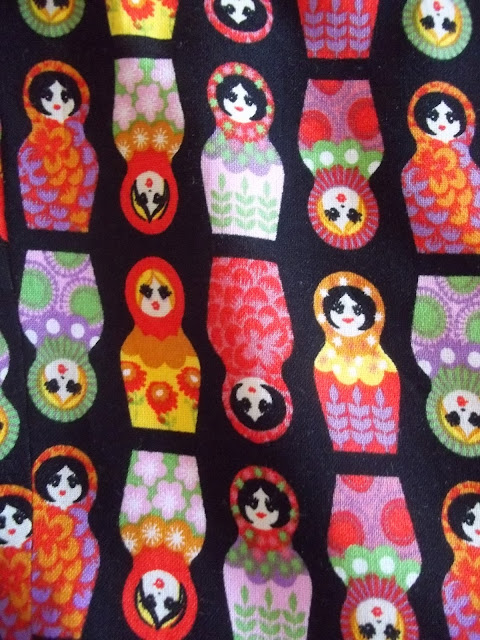 Now, once I'd figured out the cutting it was time to get down to the sewing. I can't really tell you if the instructions are straightforward because I took one look at them and was like... 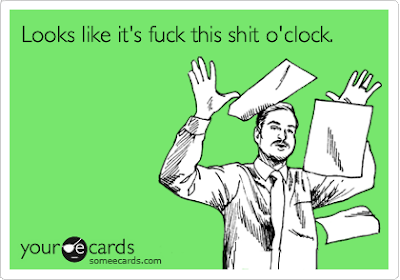 I'll tell you why, too. I read through them and one of the suggestions was to sew the centre back seam closed and then unpick it to put the zip in. THE HELL? No thanks. Well anyway - the bodice was straightforward as was the skirt, so whatevers to you, Butterick. I hate unpicking.

I didn't make many alterations to the pattern. I cut a straight size 12, as I did with my B5603, but I decreased the seam allowance at the side seams to 3/8 rather than 5/8, and I shortened the shoulder straps considerably. Oh, and I only lined the bodice, not the whole dress. This is partly because I didn't have enough lining fabric to do a circle skirt in, but mainly because I wanted to wear the dress with a petticoat and lining would get in the way. When I make this again, I'll omit the lining in the skirt also. I sewed the bodice on Friday afternoon and did the rest of the dress yesterday. When you decide to ignore the nonsense directions and do it your own way, it's pretty darned quick! 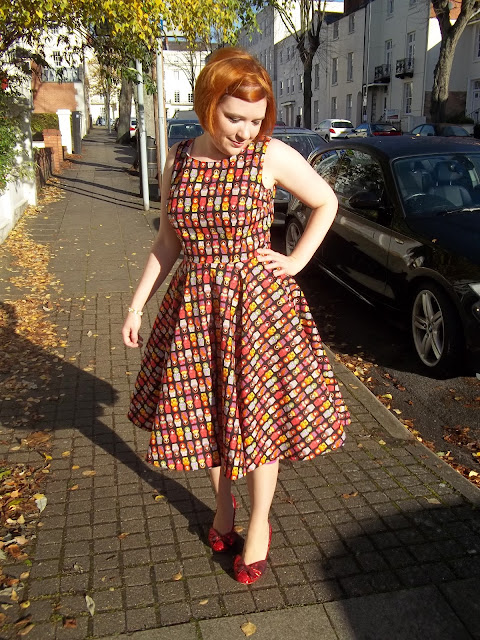 I've named it the One Good Turn dress because the Matryoshka dolls made me think of the Kate Atkinson novel of the same name, and thinking about Jason Isaacs as Jackson Brodie doesn't hurt a bit. It's not perfect, fit-wise. I ran into my usual problem with high-necked garments, which was it is a bit too wide across my collarbone and wrinkles a bit at the top. I've signed up for a pattern drafting course which I'm sure will help me iron this problem out but it's fairly minor here and doesn't bother me. When I make this dress again I'm going to bring the neckline down by about an inch and a half, which will probably help. 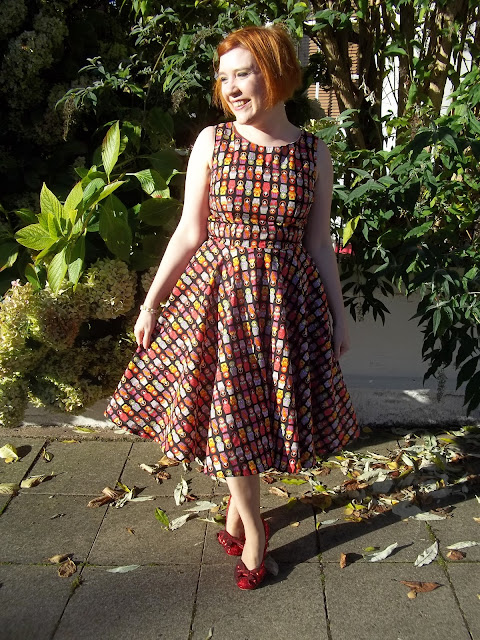 That being said, I'm pretty darn happy with it overall. I love the fact that the circle skirt makes the direction on the dolls change as you move around the skirt. And I LOVE the circle skirt! It turns out I needn't have worried about cutting it shorter as this is the perfect length for me to wear with a petticoat underneath it. The fact that I went so much shorter meant that I only had a tiny hem allowance to play with, but I wanted some weight to the hem, so I hemmed the dress with some hot pink bias binding: 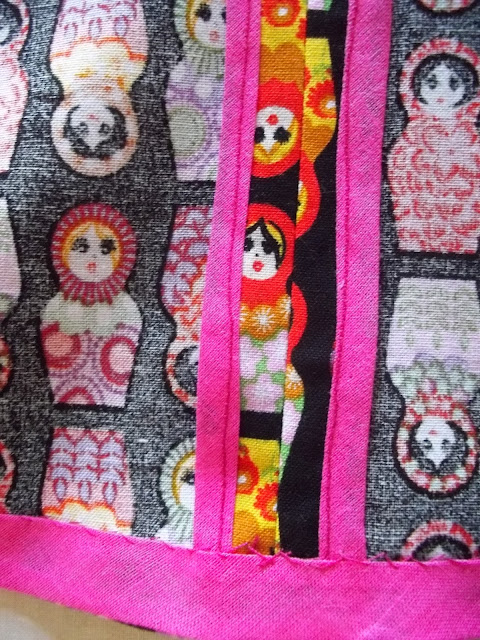 I also finished the skirt seams with bias binding because I thought it would look fun and also because I have never finished seams in this way, and I felt like trying something new. 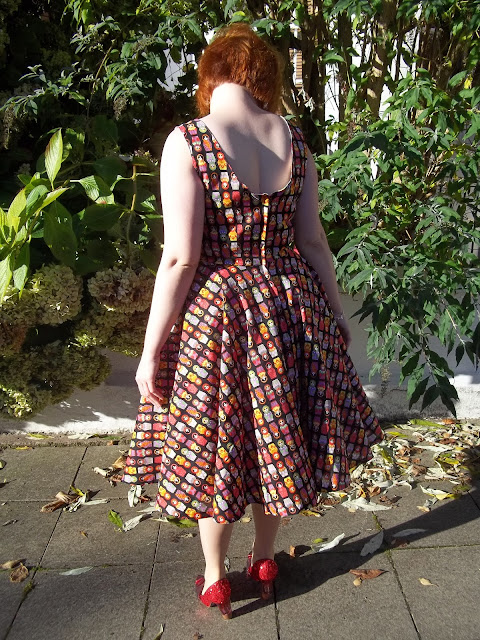 The low scoop-back is one of the pretty details on this otherwise simple pattern and I'm fairly pleased with how it turned out - although, I do wonder if a bit of interfacing around the edges would help it to sit better. Well anyway 99.99% of the time I have a cardigan on, so it doesn't matter hugely on this particular make!

Sadly because the sleeve design is fairly ordinary I coudn't have much fun recreating it the way I did with B5603 but I did think it was only fair to give it a try. 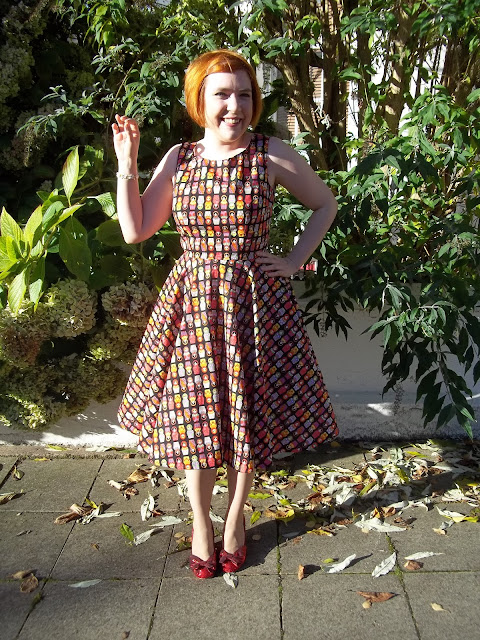 Yeah, there's not that much you can do with that envelope. Darn it!

As I said, I'm really happy with how this dress came out. That bodice needs a bit of work but I can already tell you that I'll be making this one again and again. For Lucy's dress I'm going to bring the neckline down a fair bit. I'm also going to have to swap the skirt for a full gathered skirt instead of a circle skirt - the Springtime in Paris fabric has a horizontal pattern and it's not really wide enough to get a circle skirt out of it. But that's fine and I think it will suit Lucy a bit better that way, anyway. She has this darling baby blue pindot fabric to use as lining: 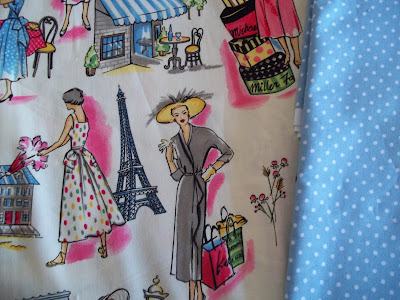 I would definitely recommend this pattern to other seamstresses, I think it's probably reasonably versatile. I think you do need to be either confident enough to ignore the instructions or patient enough to follow them, though. But overall, I'm happy with my investment, and I'm looking forward to trying out more of those Retro Butterick patterns.

For now though, I'm sewed out. Hand hemming a circle skirt is no joke. This evening I'm putting my feet up with a glass of wine and having an early night! See you all during the week.
Posted by Roisin Muldoon