I am a sinner who does not expect forgiveness. But I am not a government official.

I wouldn't necessarily describe myself as contrary, but the fact that we're knee-deep in winter now is bringing out my contrary side. I just don't really enjoy winter fashions and it's about this time of the year, when Christmas is over and it starts to get really cold, that I start to seriously yearn for the spring. I do try not to wish my life away, genuinely, but I am starting to get tired of layers.

Which is perhaps why I spent Thursday and Friday evenings sewing a tropical sundress. Yes, while it snowed outside, while my fingers were going blue with cold (my sewing machine is set up by our living room window which is single-glazed) I was there, sewing my little heart out making a strappy sundress out of flamingo-print fabric. Sometimes people say you should dress for the job you want, not the job you have - and I suppose I was applying this logic to the weather. HAH. Not really. I just don't have a great deal of interest in sewing wintery clothes.

This make was a test-run for my Bernie Dexter knockoff dress. I wouldn't strictly call this a wearable muslin, because I did tissue fit the bodice first. It was more to get an idea of the construction and to get my head around what I'd need to do when cutting into my much more expensive Michael Miller fabric. The pattern I used was New Look 6886: 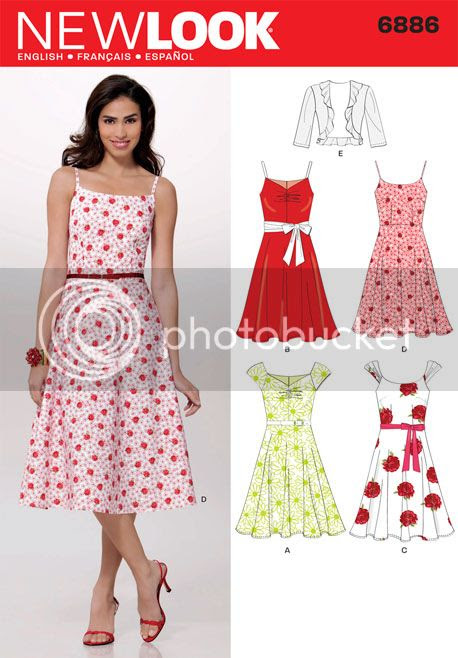 So far, so frumpy, right? Aw not really - what you've got there is a good basic sundress pattern. It's just that the model looks like she's not-so-secretly raging about the fecking hideous shoes they've put her in for this shoot. She's looking straight down the lens all "You think this is funny I WILL CUT A BITCH." Honestly, I never would have looked at this pattern if it hadn't been for Sewing Through The Motions' post on it. Lookit how cute HER dress turned out! The skirt part of this pattern is cut on the bias, so I knew it wouldn't be suitable for what I had in mind. With that said, I did spend some time tossing and turning on Wednesday night over whether I should just use the skirt pieces anyway because don't I already have enough dresses with full, gathered skirts. Does anyone else do that, by the way? Lie awake at night plotting about sewing, or fretting about it?

Anyway, in the end I decided to go with the gathered skirt. The Bernie Dexter dress I wanted to emulate has one, as does my gorgeous Bernie Dexter Jessica dress:

I wear this dress a LOT, so figured another couple of dresses like this wouldn't hurt. Also, I wanted to be able to wear a petticoat underneath it if the situation demanded. I measured the length of this skirt and the width of the skirt front hem, drew a rectangle from those measurements (with seam allowance added) and swapped that in for the bias cut skirt from the pattern. That's the only change I made and followed the rest of the instructions almost to the letter because I wanted to see where that would take me.

The construction of the bodice is very simple and calls for it to be fully lined. I had the exact right amount of this pink cotton left from lining my Calamity Jane dress so I was able to use that. I found that very pleasing because it added an extra layer of frivolity to the fact that I was making a dress with flamingos on it: 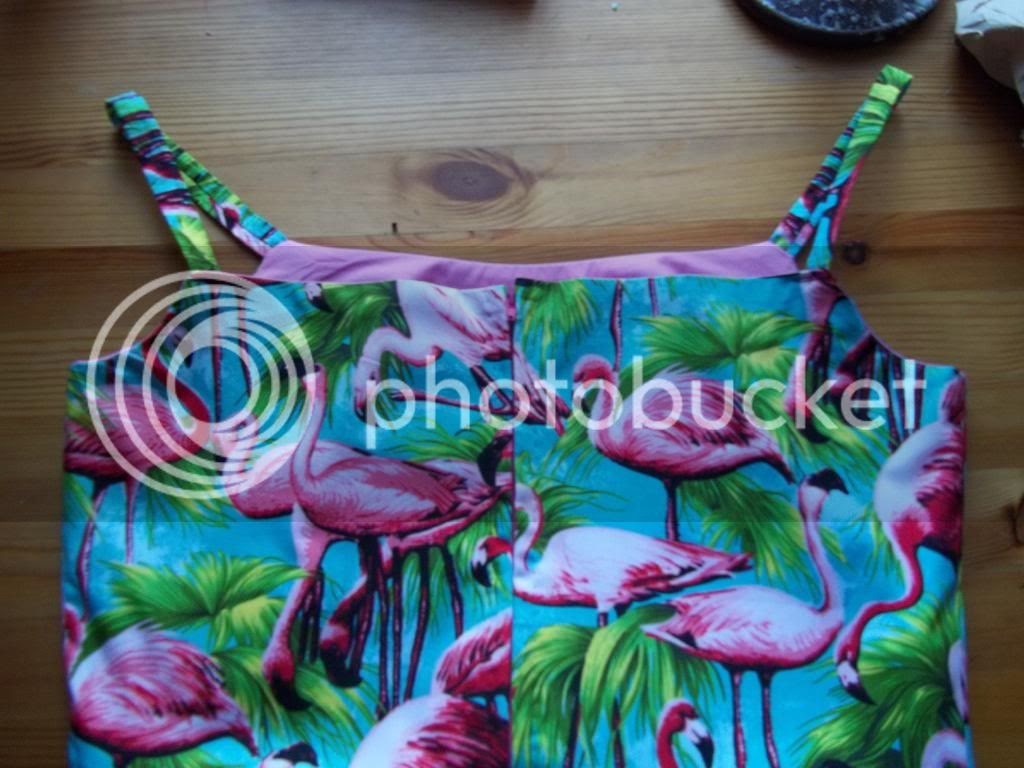 Apologies for the blurry photo - it was pretty dark when I photographed this! I did have another photo with the bodice unzipped but stupid photobucket refuses to let me rotate it and it's in the wrong orientation. Ah well!

The bodice is all pretty straightforward, with four darts in the front and none in the back. I taped the neckline at the front and back as the flamingo polycotton was pretty thin. I went against my instincts when attaching the straps, though, and followed the instructions. These have you sandwich the straps between the shell and the lining at the front but then hand-sew them down at the back, outside the lining. I appreciate that this is probably so that you can adjust the length - which I did indeed need to do - but in my opinion it's malarkey and it looks a bit crappy. I'll do the straps my own damn way when I make my Paris Ville one. Other than that, there was no messing with this dress at all, which is just how I like it!

Honolulu Baby dress - worn with Vivienne Westwood for Melissa Lady Dragon shoes and a vintage handbag with fish on it!

I decided to call this the Honolulu Baby dress. I'm not sure if you even get flamingos in Hawaii; probably not, but so what. Also, this song was in my head the entire time I was sewing it:

Now, I put this on to be photographed on Sunday (before I got sick) and, while I wasn't completely freezing in these photos because I was standing in a sunny patch, I just want to say that obviously I didn't go around in a strappy sundress with bare legs all day! These photos are for illustrative purposes only. I changed into something warmer immediately afterwards. You can see my bra straps sticking out a bit, too. I did think about putting a strapless bra on, but decided that as I don't really like strapless bras (because, duh) I'd most likely wear this with a bra, so I wanted to see how the straps would interact. It's okay at the front but less so at the back:

And this is after Nic adjusted the straps for me! To be honest, visible bra straps don't bother me hugely on a sun dress - and, in this country, I'm likely to wear this with a cardigan most of the time anyway. That being said, for the Paris Ville dress I will move the straps in a bit on the back bodice and maybe even invest in some of those bra trap things. As you can see, I did a lapped zip because I like them, and it seemed to fit in with the vaugely vintage-kitsch-tiki feel of the print.

I didn't put a petticoat on underneath for these photos because I couldn't really be bothered, but I will probably mostly wear this with one. I think it looks equally good without, though! To make good on my Pat Butcher Earrings promise, though, I put on my largest earrings:

Admittedly not Pat Butcher style dazzlers, but loud and mad all the same, and a gift from Lauren!

Of course, I couldn't model this without a sad attempt at channeling my inner pin-up, but please be aware that I KNOW I look ridiculous, and I was feeling pretty rough at this point:

If it's any consolation, I do know that I'm a complete and utter dick... I just don't care all that much.

All in all, I think New Look 6886 was a worthwhile investment. I like the shape of the bodice a lot, and with a few tweaks the fit will be comfortable and flattering. With the gathered skirt like this it's perfect for my go at the Bernie Dexter dress, and maybe at some point I'll use the pattern pieces provided for the bias-cut skirt. Well, perhaps. I'm not terribly keen on that idea, if I'm honest, I don't know why. I like the way circle skirts feel on but usually bias cut skirts get on my wick because they cling.

It's going to be a reasonable amount of time before it's not too cold to wear this dress, but still. I enjoyed the hell out of sewing it and I really do adore the fabric. It's ticking all the me boxes - colourful, fun, ridiculous print. I'm sold, and I have a little list of what I need to do on the real thing to get it right. Not a bad way to spend a few hours, right?
Posted by Roisin Muldoon