It's a wonder we stay sane, working with these buggers all day.

So, it all got a bit clever in this week’s Scott and Bailey, I must say. It was a bit Scott and Bailey does The Usual Suspects, if you like, as the episode played with its own internal timeline as well as with the timeline of the final episode of series 2. It did this fairly successfully, I think, and it’s admirable that the writers were keen to try something new with the format. When I saw the teaser for this episode, I did a massive groan at the idea of Nick Savage’s murder being reintroduced, but I mostly take that back. It was fine.

So, what happened? Well, the episode jumped around in time, starting with Janet, Rachel and the rest of Syndicate 9 knocking on a skel’s door to track him down. He wasn’t at home, and this gave the episode a loose structure as Janet and Rachel drove round Manchester trying to catch up with this poor sad sack who accidentally murdered a tramp by pushing him over. I think that following Crimer Show on twitter has actually sort of ruined me for crime shows, because I found it a bit irritating that this was the only crime in this episode, and it didn’t involve melk or anamoles. This episode, despite its whizzy format and its setting, was much more like an episode of a soap opera than anything else because it was largely about feelings. I appreciated knowing more about Rachel, but the episode did feel a bit overbalanced as a result.

Rachel confesses to Janet that she picked up some saddo and took him back to a hotel room for a boink and, surprise surprise, she’s not happy in her marriage to dickhead Sean and she married him for all the wrong reasons, at which point we cut back to 12 months earlier. Back to the scene where Rachel confronts Dom to tell him that Nick Savage has died, and lets him go. That’s all we see in the first go-around, but what this episode shows us is Rachel calling it in, and having Dom arrested. Having watched the episode twice now, I can’t decide if this was reshot afterwards or shot at the time, because Rachel’s hair looks A LOT better. But it’s good, and it makes more sense given that Rachel knows that he would be caught eventually.


The men in Rachel's life are dickheads.

Having turned Dom in, and given her statement, Rachel gives Gill the fingers over the phone when she can’t come straight back to work. This bit made me laugh in recognition. I’ve given people the fingers over the phone plenty of times before. Poor old Rachel finds herself getting arrested on suspicion of murder after Dom says that she put him up to it, and you know, things aren’t good. Rachel consults with Janet over what to do and this scene made me laugh, a lot. When I first started watching the show I disliked Janet, and I disliked Lesley Sharp, but I found myself really warming to both the character and the actor as the show progressed. This scene reminded me why I didn’t like the character. It’s not that Janet is unsympathetic to Rachel, but she’s almost totally emotionless and even pretty judgemental. With that said, I liked the scene because you don’t really see this kind of friendship on TV usually, so this is quite refreshing. Still though, Janet. A smile wouldn’t kill you! Also, this scene made me take back what I said last week about everyone’s hair looking better this series because, hot damn, Janet’s hair was bad. Wispy and crispy and just BAD. And this isn’t even the worst it looks during the episode.

Anyway, Rachel decides she’s going to meet her mum after all, and again we see her telling Sean she’s going to marry him, and then we see her in the pub with the mum who is not Nicholas Gleaves in a dress. I’m still a bit upset about that. Anyway, I won’t recap the conversation except to say that I think Suranne Jones is just brilliant. She’s hilarious, and she’s still as scary as she was when she was Karen in Coronation Street. In this scene she was brilliant at expressing irritation and attempted contempt and nervousness and vulnerability in a sniff. Just as she identified with the daughter of a bad mother in the previous episode, she was clearly able to empathise with her mother’s reasons for leaving them when she was a child.

Rachel meets her sister Alison to discuss her arrest, and the meeting with their mother. Hilariously, Alison fears Rachel’s flat has been bugged so they go to sit outside at a pub to discuss things. This bit made Nic snort, saying “I love going to sit outside at a pub in the freezing cold and not buy anything.” Like, come on, it’s meant to be March in Manchester! Anyway, Alison is dismissive of their mother’s claims that she has changed, but she agrees to be Rachel’s “Best Woman or whatever” so it’s ALL GOOD.

By this point in the episode I think it was starting to feel a bit weird – we had a few cuts to the action happening in the present, which all felt a bit perfunctory. You get a bit of Rachel ranting about how the CPS will probably drop the case, and then we’re back in the past and learning that the CPS are dropping the case. But whoops, there’s going to be a disciplinary hearing and maybe she’s going to lose her job because, while a court case has to determine guilt beyond reasonable doubt, one of these things can do whatever they want. Rachel goes into wedding planning mode, trying on a gorgeous and classy dress that makes Alison angry because it’s plain. Janet is once again totally disinterested all “It’s a bit plain but it’s fine do what you want FOR THE LOVE OF GOD STOP TALKING TO ME” Anyway, then it’s time for her hearing and Gill says nice things about her in a very angry way and then Rachel is wearing a sparkly vest top and dancing with Sean in a disco. So, yay?

Back to the present and Rachel is saying to Janet that her shag in a hotel wasn’t even that good, and that she really knew on the morning of the wedding that she shouldn’t be marrying Sean but she thought that was how you were supposed to feel. We see Rachel and Sean in bed, and it’s raining, and Sean is being a goon with the brainwave of putting a kilt on Kevin. Then Rachel is getting ready with Alison and Janet. Alison’s hair looks immense in a great big backcombed bob and an ugly fascinator, but she looks brilliant. Poor old Lesley Sharp – they have Janet in a disgusting cobalt blue lace dress with a sad crunchy top knot with bits hanging down – think Denise Royle on the morning of her wedding but less stylish – and so much black eyeliner I wanted to reach through the screen and smack the kohl pencil out of her hand. Lesley Sharp is really attractive, but the whole thing made her look like Skeletor and that made me a sad panda. Rachel is expressing concern, the two married women in the room are telling her it’ll be fine and Janet is babbling about making a commitment in the least convincing display of support ever. Poor Rachel. 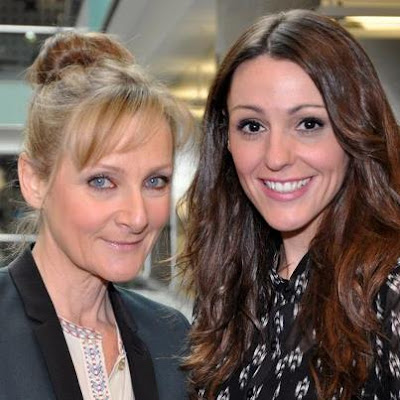 This photo isn't from the show, but of Lesley Sharp and Suranne Jones when they were on BBC Breakfast or something. Anyway, this top knot is basically what I described, but it looks fine. Imagine this but 72 times shitter. Then you've got it.

The wedding is in some grubby pub, Sean looks like a bellend in his kilt and Rachel’s mum is comprehensively embarrassing on the karaoke, ending by flashing her bra while Baldy Mitch, Chubby Bob and friends cheer. Future Rachel tells Janet that she spent her whole life trying to get away from that shitty, grubby scene and now she’s put herself right back in it, and it feels like it. Her resignation is palpable. While she is thanking Gill for speaking up for her at the hearing, Sean is mooning everyone on the dancefloor. It’s genuinely dispiriting. Meanwhile, boring old Ade – who looks even MORE like Father Dougal than usual, it must be the suit – gives Janet the elbow. I can’t blame him. I couldn’t live with that hair either. She reacts to this with as much emotion as she did to Rachel’s wedding dress. Is Janet secretly on Prozac?

Alison I love your hair and your angry, angry face.

Still though, we do find out why Chubby Bob is beefing with Rachel – or we get some clue anyway. On leaving, Gill hears some grunting in the carpark and, grabbing her flashlight, catches Chubby Bob giving one to Rachel’s mum on the bonnet of a parked car. It is so grim, you guys. Gill is raging – she chases Sharon away, hilariously calling her Tina Turner like that’s a term of abuse, and then giving old Chubby Bob a talking to. He’s up in her office first thing on Monday morning, so he’s in trouble. Understandably, Gill didn’t see the funny side. 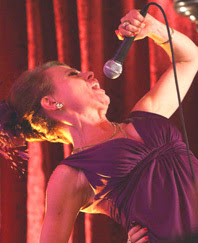 Ewww, Chubby Bob. You don't know where she's been!

So, Rachel and Janet arrest the estate agent, and when he says he was just in the wrong place at the wrong time, Rachel says “join the club, mate.” Fair play.

On balance, I enjoyed this episode. I’m sad there wasn’t more of the rest of the team, and I’m definitely disappointed in the lack of crimes (CRIMERRRRRRRR) Janet seemed to be on some sort of mind-holiday in this episode, too, which is maybe why it felt so flat. She was phoning it in. Still, though – I liked the attempt at a different format, and I just love Suranne Jones so I’d be happy to watch a whole 45 minutes of just her facial expressions, so I enjoyed this. 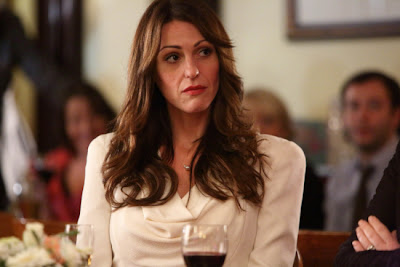 NEXT WEEK ON SCOTT AND BAILEY: Chubby Bob is on thin ice. Rachel’s shag bandit phones her up. Sean is suspicious. I didn't know you can get suspicious with only three brain cells. And the guest star is only Doctor Laura Bloody Hobson of Morse and Lewis fame – YESSS! See you then, crime fans!

Scott and Bailey is broadcast on ITV at 9pm on Wednesday.
Posted by Roisin Muldoon