Janet and Ade put their house on the market. Then Janet discovers a severed head at a crime scene.

It’s been a while since I blogged about TV, but last week saw the broadcast of a series that I was very excited about watching.

I’m not actually talking about The Great British Sewing Bee (no disrespect, though. I just can’t handle these competition style shows.) No, I’m talking about the third series of ITV police procedural drama, Scott and Bailey. Over the course of the first two series, I went from being cautiously pleased with it to being an actual fan, so I was super excited when series 3 began last Wednesday night on ITV. I’ve actually written about the show before, and if you’d like to read my review of the first series you can here. 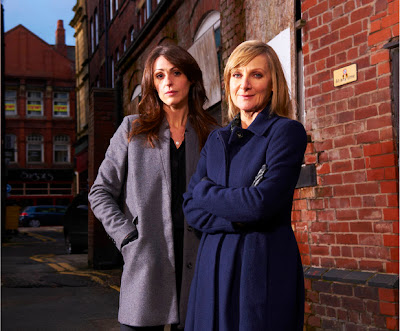 Weirdly over-saturated picture. Janet never wears coats this nice in the show, either.

I thoroughly enjoyed series 2 of Scott and Bailey, despite a few reservations about some of the plotting. The final episode ended on a weird note of surprise as Rachel went to a country pub to meet her estranged mum, whose identity wasn’t revealed to the audience. It turns out that, sadly, Rachel’s mum is not actually Nicholas Gleaves in a dress. This is what Nic and I predicted and hoped for following Andy getting the boot from MIT, but I suppose you can’t have everything. The other slightly irritating, but more understandable plot point was Rachel agreeing to marry Pound Shop Robbie Williams, also known as Sean Maguire. His character, also called Sean, is SERIOUSLY boring. 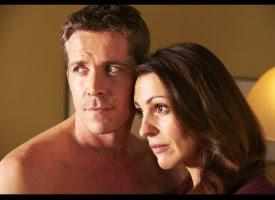 Character name same as actor name - clearly there is a reason for this. BRAINIAC ALERT.

So, it was interesting that the first episode of series 3 opens on Gill Murray being attacked in her car after leaving the Costco carpark. This is setting up something for the rest of the series as the identity of the attacker and the outcome of the attack aren’t shown – instead we go back to 8 months earlier, which is presumably shortly after the end of the second series. Now, I enjoyed this scene with Gill because I really like a bit of WTF in this kind of show. I’m going to enjoy figuring out who it could be, and why they felt moved to attack her. Right now I think the motive could be that the attacker objected to Gill’s wispy fringe, because I know I did.

This episode also did a bit of setting up on behalf of the other characters. This is something Scott and Bailey is good at – giving you enough shorthand that you can build up a picture of what’s going on for each character. So we learned that Chubby Bob – Pete Readyough – has got some mysterious beef with Rachel, but we don’t know what yet. We learned that, understandably, Janet is getting pissed off at doing Andy’s job without being paid to do it (I FEEL YOU BRO). We learned that poor old Kevin failed his sergeant’s exam and is at risk of getting the boot from MIT unless he starts to impress Gill. We didn’t learn anything about Baldy Mitch or Lee, but maybe we will in episode 2. Oh and we also re-learned stuff that we already know in that Sean is a boring bellend and well below Rachel’s consideration, and that Rachel hates her mum. Also, we've learned that overall everyone's hair is better in this episode. Rachel was having a shitty time in the second series and this was reflected in her hair. I'm curious to see if this trend continues.

The crime itself was standard Scott and Bailey fare. Nic and I were really thrilled and amused by the synopsis on the ITV player, which read: “Rachel struggles to adjust to living with Sean. Admitting their marriage is over, Janet and Ade put their house on the market. Then Janet discovers a severed head at a crime scene.” I mean, how could you fail to be excited by a synopsis like that?! This is pretty usual for Scott and Bailey – a gruesome death with a weird twist, and some horrible abuse thrown into the mix for fun. It’s in the crimes that Scott and Bailey feels at its most ITV drama-esque, although in fairness I suppose Inspector Morse and Sherlock had their own fair share of weird crimes too. I must admit, the lurid nature of the crimes does add to my overall enjoyment of the show even if it means that it sits weirdly with the otherwise naturalistic feeling of the show. 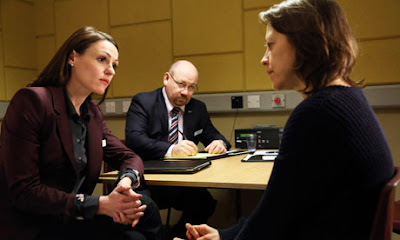 Rachel interrogates Helen Bartlett. But what is Chubby Bob's beef? That's what I want to know!

On first watch, I was a little bit surprised by the crime. Well, not by the crime. It was obvious as soon as George Costigan made an appearance that he was up to something. Rather, I was surprised by the (relatively) circumspect way in which the show handed the abuse storyline. However, on a second watch the degree to which Rachel both sympathised with and seemed to even identify with Helen Bartlett made me think that this episode was setting up something for a future episode. Indeed, Scott and Bailey on the whole seems to be interested in bad or disinterested or even just ineffective mothers, and this certainly chimes with Rachel’s experience of allowing her mother back into her life. This is something that sits a bit strangely with me, if I’m honest. I’m a little bit uncomfortable with the idea that it might go down the route of BAD MOTHERS ARE BAD. But there again, it might not.

What this episode did, and what Scott and Bailey has always been good at, is allow Janet and Rachel to be good at their jobs. I always enjoy the scenes in the interview room because this style of dialogue is unique to Scott and Bailey. You get to see the methodical way the detective approaches the task of gleaning information from the suspect, and this was true in Rachel's sensitive and thorough interrogation of Helen.

I’m interested to see where the series progresses. The teaser for episode 2 shows a return to the death of Nick Savage, and it looks as though Rachel is going to be investigated again for that. YAWN. That was one aspect of series 2 that I disliked because the whole thing was so completely implausible and the scenes with Sally Lindsay were a shocking waste of her considerable talent. Still, I think the show will continue to be interesting and entertaining. Even when Scott and Bailey isn’t at its best, it is consistently well-written and engaging. So, check back next week for my post about episode 2.