You need to go to Wolverhampton to visit your family? Why not borrow my Aston Martin? 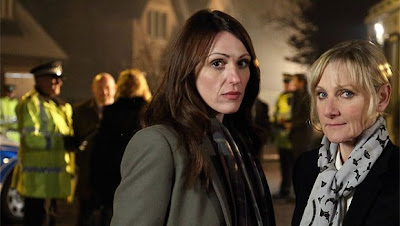 Oooh serious faces this week because of all the CRIMES...

This recap of episode 3 is a little bit late this week - episode 4 is just around the corner! Still, maybe it will whet your appetite.

So anyway, after episode 2's timeline jiggery pokery, episode 3 was back into the serious business of investigating crimes. Well, mostly. There was some fun personal stuff, too.

So, the CRIME. I was complaining last week about the lack of criming. This week the major incident team are investigating the death of man found with his throat slit in his kitchen. In typical Scott and Bailey style, we get a good look at the bloody carcass on the kitchen floor, complete with bright red blood splatters on the ceiling. It's a brief moment, but enjoyable in how lurid it is. You have to love ITV drama for this.

Anyway, Carcass was found by his son, Inexplicably Welsh Danny. The kid who plays Inexplicably Welsh Danny is absolutely brilliant, all twitchy and paranoid and a totally believable suspect even before you find out that he's been knocking his mum about. His mum is played by Clare Holman, better known as Laura Hobson from Morse and Lewis, which made me do a big yay. I think that actress is top, and because I am such a massive saddo, I love when character actors from my favourite shows turn up in my other favourite shows. Case in point - when Phil from Early Doors shows up in a series one episode of Scott and Bailey as a cop? Classic casting.

Yeah, I decided to move away from Oxford because of the high crime rate... Oh.

Anyway, poor old Hobson. She immediately suspects her Inexplicably Welsh son and, really, who can blame her? He's a fucking twitch. And why is he Welsh? She isn't. There's a bit of back and forth when a neighbour identifies Inexplicably Welsh at the crime scene, but it turns out Chubby Bill got it wrong, and it was some other rando in the house that night. Hobson reveals that Carcass liked cruising the gay scene on Canal Street, and the team trace fingerprints back to one Andy Ibbotson. I'm sure I know someone in real life who is actually called Andy Ibbotson.

Anyway, Ibbotson is one of the best skels they've had on Scott and Bailey in a long time. He is stupid enough to park a stolen Aston Martin on his shitty street, and his excuse for having it - after supposedly mindblowing sex, Carcass was so happy he let Ibbotson borrow the car to drive to Wolverhampton to visit his family. RITE. Lee isn't buying, and a brainwave from Rachel about DNA on a Rolex (super classy, right) gets old Ibbotson bang to rights. He cut Carcass's throat with a kitchen knife after not having sex and then parked his stolen car on his street while letting his girlfriend buy things on ebay with his stolen credit card. Brains. Genuinely, Ibbotson was a class act. When Lee asks him to describe the way in which he and Carcass had sex, Ibbotson answer is "in the way you'd expect". Look, it's not funny on paper but it made me LOL.

Rachel and Janet go round to Inexplicably Welsh's flat to lay the news on him, and to arrest him for beating on his moms. Job done!

There was LOADS of good character stuff in this episode that brought the happy. Poor old Janet is fed up of Ade gallivanting with his new bird, so tells him to move out. Eleanor is a good influence on Ade - this is the first episode where he hasn't looked like a less charismatic Father Dougal, because now he has a trendy haircut, hipster glasses and an anorak! It seems like Janet has given up on any excitement in her life, so she asks her mum to move in in the most tragically awkward way possible. It even makes Rachel roll her eyes. I wonder what they're going to do with Janet. I like that they've put her in a rut, and I'm really hoping that they're going to jolt her out of it by bringing Nicholas Gleaves AKA Andy AKA ROBBO back into the show. Come on guys, it's not the same without him! Janet tells Rachel she's too long in the tooth to care why Crimers do Crimes - I think something is going to happen to make her care, eh?

Meanwhile in Rachel land, is Sean accidentally going to stumble on her infidelity? It'd have to be an accident, he is still too dopey for words. When the useless plank she shagged in a hotel rings looking for Susie, Sean answers. He later wonders whether to ring the guy back, but then loses focus. Dingbat. Rachel is spending her evenings on the sofa eating Weetabix and drinking red wine. This isn't going anywhere good, lads. At least she's enjoying her job, though.

Gill is having a fun episode herself. Sammy is engaged to Orla, which she's a bit like "OMGWTFBBQ but it's okay I really like her" about it. Hilariously, it doesn't even occur to her that Orla might be up the duff until the coroner suggests it. Like, Gill, investigation is your job, yeah? When Rachel congratulates her, Gill snaps "Are you taking the piss?" which, yeah, made me laugh a lot. 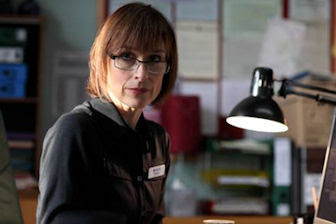 "That wee bitch better not be pregnant."

Elsewhere in the squad, Chubby Bob done fucked up with his bad information and he is "walking on thin FUCKING ICE" according to Gill. He tearfully confesses to Janet that he got caught slipping the beef to Rachel's mum, and Janet advises him not to tell anyone, but wonderfully asks if this is why he has been "shitting on Sherlock" YEAH NICE IMAGE THERE JAN. Kev is busy eating lollipops and wondering why criminals are so stupid, and Baldy Mitch and Brummy Lee are being good PO-lice. I'm so happy to see Baldy Mitch and Lee bringing it. Lee is awesome in the interview room and Mitch is werking it in the squadroom. Keep it up, lads.

Drawing down the veil of SERIOUSNESS

NEXT WEEK ON SCOTT AND BAILEY: Yes! Rachel Bartlett is back. I totally predicted that this was going to be some kind of House of Horrors Fred and Rose style scenario, so I'm very pleased that I was right. Also, more George Costigan, which makes me happy. Also, Slap's back too! I fucking love this show. See you then, friends.