Even if you're a mad twat, you tidy up between jobs. You just do. 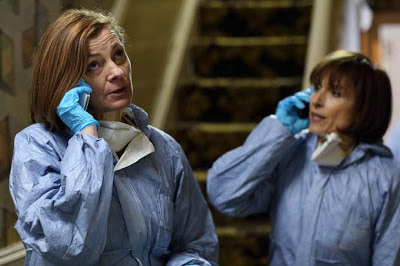 Scott and Bailey series 3, episodes 4 and 5. Also known as: SHIT GETS REAL

Another late recap, due to holidays. So this time I'm going to talk about episodes 4 and 5, which kind of worked as a two-parter anyway as we delved further into the House of Horrors at Peverell Street.

Episode 4 was pretty grim, but I think on the whole these two episodes were pretty cool. Firstly, I'm always happy when I get to see Gill and Julie teaming up, and who doesn't love those fetching blue overall things. No fear of lack of criming this week - the crimes were busting out all over the place.

It seems like Janet has basically given up - the episode opens with her having a rocking night in, playing Monopoply with her mum and daughters.Like, ooh Janet, you know how to live! Anyway, poor old Helen Bartlett shows up at her door and confesses that her dead brother is buried in the basement of her childhood home, and it was her dad what did the killing. In the next scene, as we see Janet explain it to Gill, Gill is immediately suspicious of Helen. This seems a bit harsh, and Helen is a convincing victim. 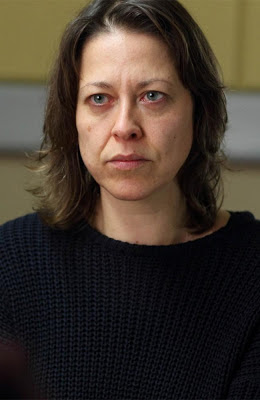 I was pretty shocked by the extent of the crime that was uncovered and, while it piques my interest because I'm interested in serial killers generally,  I did wonder if it was a mistake to do another serial killer story after Stabby Geoff in series 1. I mean, actual serial killers are pretty rare so it does strain the boundaries of credibility somewhat to have two operating in an overlapping timeframe in Oldham! To be fair I'm sure the writers are aware of this but it does add to the strangeness that Janet is basically in the middle of this Venn diagram of Oldham serial killers. What makes the whole thing even stranger is that Janet invites Helen into the very kitchen where Stabby Geoff stabbed the shit clean out of her! She even turns her back on Helen while on the phone to Rachel. Er, Jan, don't you remember what happened the last time you did that? YOU GOT STABBED, LOVE.

I'm no one to talk about knowing a lot about serial killers because I've read four books about Fred and Rose West and just this evening I exhanged a series of texts with my friend Carts about John Wayne Gacy (he started it, though) but ITV seem pretty interested in Fred and Rose. The story of Peverell Street shakes out in much the same way as what happened with the Wests and, if I'm honest, it feels a bit exploitative as ITV have already done a drama about the Wests (the admittedly excellent Appropriate Adult) They seem keen to underscore the similarity in the cases in case, you know, you've been living under a rock. I found it surprising that they didn't at any point mention the Wests - in an earlier episode reference was made to Myra Hindley, and in the most recent episode Beverley Allitt was mentioned. Perhaps this is meant to be a dramatic interpretation of the West case, but I find that a bit strange too.

In any case, any reservations I had about this storyline were definitely assuaged by the performances of both Nicola Walker and George Costigan. Costigan is absolutely excellent, flipping from confused old man to convincing manipulator with frightening speed.

The scenes where Rachel interviews Joe, with Baldy Mitch as her second, were really enjoyable. These scenes are often my favourites in Scott and Bailey because the tone of them is so different to the rest of the show, and to any other police procedural I have watched because they are so procedural. In these episodes I was particularly glad of this because I think it did mitigate against the lurid nature of the crime - 7 bodies uncovered, all of whom had died in really brutal cirumstances.

In fact, what I really enjoyed about these episodes was the policing. Because the crime is so big, Gill is sharing it with another syndicate and Julie Dodson is in charge. The slight tension of Gill being a deputy, combined with the fact that they're a great double act, is really nicely written. I thoroughly enjoyed the scene between the two of them in the car, working out the order of burial of Bevan's victims. I love seeing Gill doing policing - "...even if you're a mad twat, you tidy up between jobs. You just do." 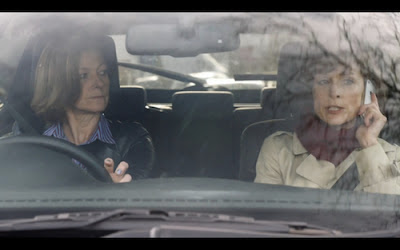 A lot of badass in one car - "The whole thing's speculative bollocks, of course."

Of course, there's lots of good character stuff in these two episodes. Janet gets busy crabbing about the new sergeant on the block - Sergeant Rob Not Robbo. Well, not about him, but about how now she wants the job after saying she didn't, and Gill has given it to someone else. Well durr, Janet. Which is basically what Rachel says. The new guy is, predictably, a bit of a dipshit. I mean, not Kevin-level dipshit. Just your basic dickhead. He's OMGAMAZED by Rachel's interview technique, to which Janet drily tells him... 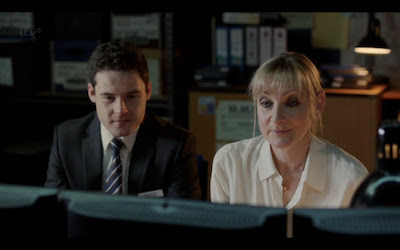 Anyway, I couldn't really give a shit about Janet being sergeant and this dickhead. But I did like the other work stuff. Poor old Chubby Bill is still having a rough time, and now he's being blackmailed by Rachel's slaggy mum. Kevin is still being your average dickhead and is possibly the OMGWTF leak. Baldy Mitch and Brummy Lee are still solid gold awesome. Mitch is Rachel's second when she's interviewing Joe Bevan and the way he bowls into the squad room, all excitedly delighted about how Rachel managed to crack Joe, well it is bloody CUTE. Some critics of Scott and Bailey say that all the men on the show are idiots, but this is patently not the case. Mitch and Lee are good PO-lice. 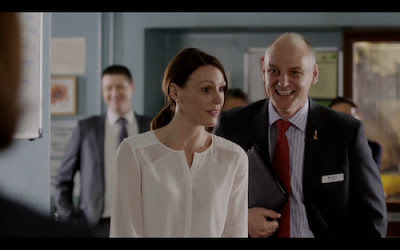 I love you, Baldy Mitch. CALL ME.

Sean is still being a complete and utter cock, though. To be fair, Rachel is continuing to make bad life choices - episode four ends with her kipping in a sleeping bag in the office rather than going home to him. In episode five, he forces her hand and gets her to say that she's not really interested in being married to him. Hm. Hard to see why... 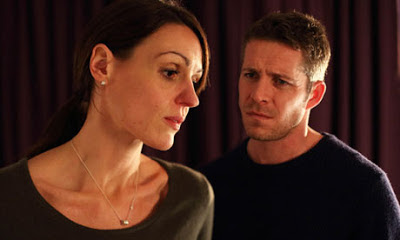 Part of me totally sympathises with Sean because Rachel's behaviour is really frustrating - we've all been in that shitty relationship at some point in our lives where, rather than just end things, the other person just treats you like a pariah until you give in and dump them. That's what she's doing here. But I totally understand it, because he is an asshat, and his way of dealing with it is to keep telling her that her feelings are irrational, and that she'll get over it, and, charmingly, "I know you're mad. You are mad. This hasn't gone wrong. It's all in your head. You're just feeling trapped." NICE GASLIGHTING, ASSHOLE. Sean can do one. Especially as he's brought Rachel's rough-as-a-badger's-arse mum back into her life. I kind of find him a perplexing character because, why would he be the way he is? But, yeah. He needs to make an exit, STAT.

So, the Peverell Street job is wrapped up with Joe confessing, and Helen arrested for preventing an unlawful burial. But it can't be the end of this tale - that has to be Helen attacking Gill in the first episode, right? And who is the leak? My money is on it being Janet's mum - seriously - but I'm not totally sure that it is Helen in Gill's car. Repeated references to the two teenage girls convicted of killing an old woman and putting her in a wheelie bin and putting her in the canal (yeah, that's pretty standard criming as far as Scott and Bailey goes though) make me think that maybe something else is going on. Or maybe, you know, Helen was more involved and this is the show's way of telling us that even teenage girls can be evil. Teenage girls being evil - shocker!

NEXT WEEK ON SCOTT AND BAILEY: Some bad shit happens in a care home. Is Kevin the leak? Do I recognise that woman from Coronation Street or Emmerdale or what? ALL WILL BE REVEALED. Maybe.

No reason for this gif other than it's awesome. Gill Murray: No fucks to give.

Scott and Bailey is broadcast at 9pm on Wednesday on ITV.
Posted by Roisin Muldoon