I remember the first time I ate a live taspar. I was six years old and living on the streets of Lakat.

Evening guys! It's pretty rare for me to blog on a Saturday, but here I am! The dinner is cooking, and Nic and I are watching Star Trek: The Next Generation. There are two Rikers in this episode so it's all good. Anyway, we're heading out for the evening pretty soon but I've had a lovely day, and I wore one of my new Me Made May pledge dresses, so I'm keen to share!

So, the story with this dress is that one of the things I definitely wanted to buy in Paris was some toile du jouy style fabric. It's pretty, and also there was this dress from Oasis last year that I didn't buy because it was £85 and probably too short, and £85 flipping pounds - the fuck? 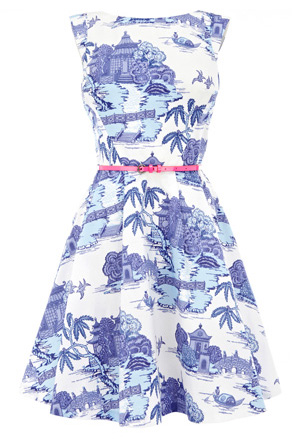 Nice, right? but £85? For that money it would need to come with a kitten. Oasis need to catch themselves on with their pricing.

Griping aside, I was really taken with the willow-pattern style print, and I loved the colours. So when we were in Paris, I made a beeline for the floor in Dreyfus where they sold toile du jouy, but none of it seemed quite right. But then I found something that fit the bill in Tissus Reine, and fell on it. Yes, it had Eiffel Towers on it, and yes, I felt like a bit of a dick buying it. But big whoop, when do I not? Anyway, there was only really one option for it, and that was the Simplicity 2444 bodice and a gathered skirt.

Just a quick word on the fabric - I haven't been able to find it in this colour online really anywhere, and it's not on the Reine website. But it's Toujours Eiffel by Lakehouse Dry Goods if you want to have a look for it. It's 100% cotton, probably quilting weight really but with a lovely drape and gorgeous to sew with. It was about 14 euros a metre, and I bought two metres, which was more than enough for this dress. I sewed this over two evenings but for some reason had to fiddle a bit with it to get it right! Nothing major and nothing worth writing about really, but it's partly why it's taken me a while to wear it. Anyway, as you can see from the photo above of the Oasis dress, it was styled with a pink belt, so I wore this with my faithful pink Topshop shoes.

One of the things that was stressful about this dress is that two zips broke in the process of making it, which is fucking bad luck. Seriously annoying. Nic made a midweek run to Royal Fabrics for me and bought a zip. Maverick that he is, he bought me a blue one, and suggested I let it show in the dress. I love that he was suggesting design features for me, what a cutie! 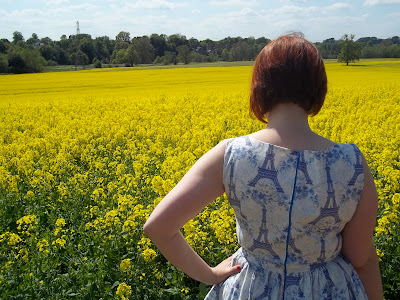 I make no apology at all for the fact that I love the Eiffel Tower print (and at some point I'll get around to sewing something from the Michael Miller fabric I also bought in Reine) but I really love the colours in this print, and the faded floral print in the background. And of course, it has many happy memories of Paris. I named it from a street around the corner from where we stayed - one that was halfway down the hill from the Sacre Coeur - Rue Paul Albert: 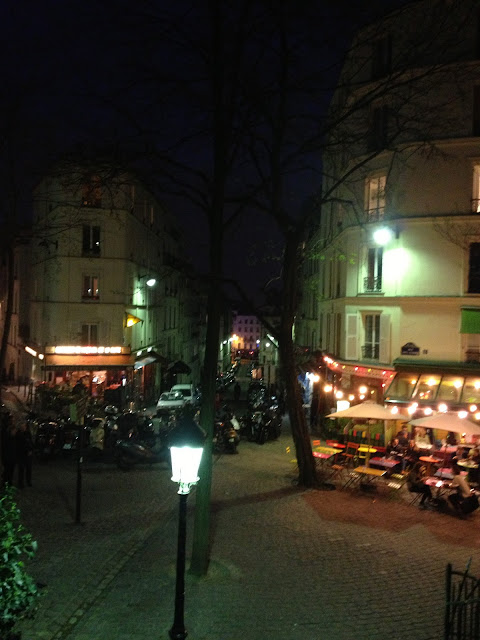 Rue Paul Albert, and the street leading down from it (Rue Muller) had lots of charming bars and restaurants and was just pretty and Parisian. It was a happy place to be! I will tell you more when I finally get around to writing up the second half of my Paris post.

The Rue Paul Albert dress had its first outing to a far less picturesque city, though, as I wore it today to go to... COVENTRY. Oh yes! I work in Coventry so I'm not usually that keen to go there on my days off, by our friends Lauren and Rick had invited us to take part in a Cash Mob, so off we went. This is how this happened: 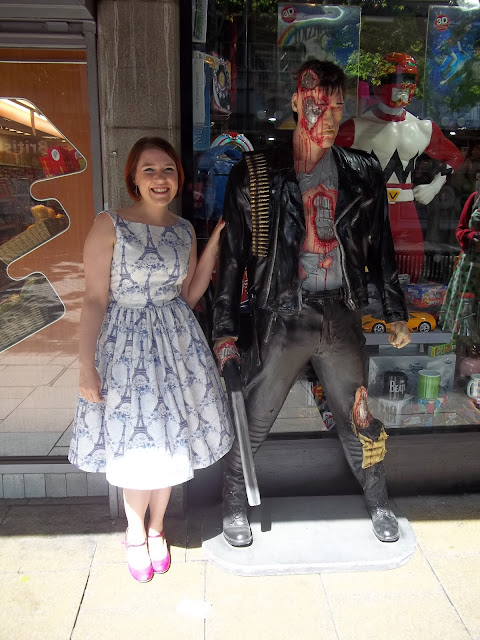 So, here I am with the Terminator... 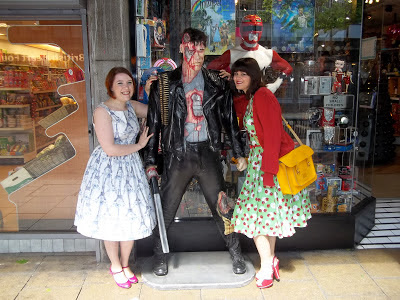 ...and with my lovely Lauren

Luckily though, Leamington is much more picturesque. After a very successful Cash Mob, and a very enjoyable morning with friends, Nic and I took ourselves off through the fields to the Saxon Mill for a drink in the sunshine. Fine bank holiday weekend fun. And NO RAINING. So that's good!

Looking wistfully in the direction of the pub

So, in short. Rue Paul Albert dress: Success. Simplicity 2444 is still awesome. I did buy some new sewing patterns today though, so it's time to shake things up in here!

Not right now, though. Right now it's time to go to the pub.
Posted by Roisin Muldoon