They sold my book in Paris. It's an advance from France!

Bon soir all! Yes, it's that time. Time for me to show you some of the squillion photos I took when we were in Paris, and to tell you about our trip. SPOILER: We had a really good time.

So, being back at work has basically made Paris already seem like it happened years ago, but it was such a good holiday. We had a lot of fun, but it was really relaxing as well. I came back feeling tired, but totally rested, and I still do.

Our Eurostar to Paris left St Pancras in the afternoon, arriving into Paris at 8:15pm. This was nice because it meant we didn't have to rush down to London to catch the train. We had an early start anyway, so we could take it easy, so we started our holiday by having a massive lunch in Yo Sushi and then sharing a bottle of champagne on the Eurostar. It was really exciting to arrive at the Gare du Nord, and I had dressed for the occasion: 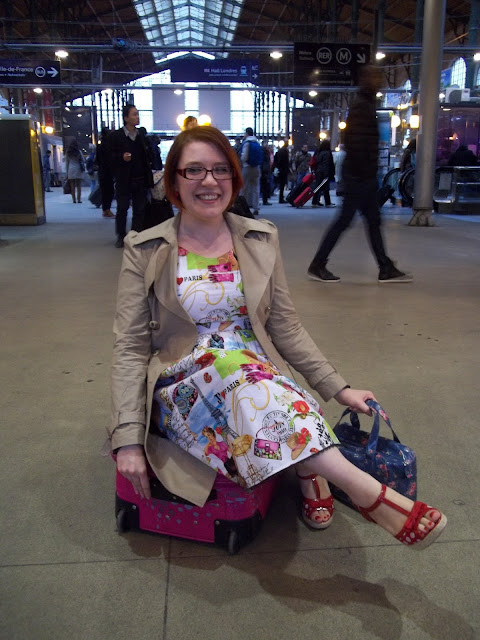 I was really in the holiday mood by the time we got to Paris, and even more so when we got to our apartment. It was a beautiful evening, and the apartment was gorgeous, and our host had even provided us with food! After we got unpacked and freshened up, it was time to go out for a walk and for dinner. 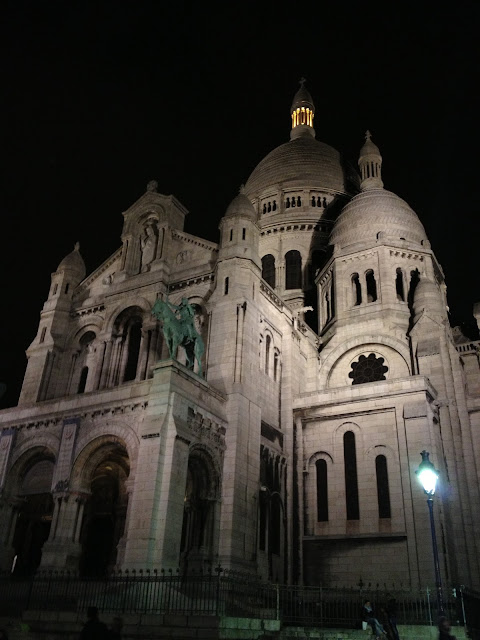 The Sacre Coeur was a five minute walk from our flat on Rue Feutrier. Going up there at night is beautiful - I love the view of Paris lit up at night. It's a shame there were so many winos pissing on the ground, but what can you do?! 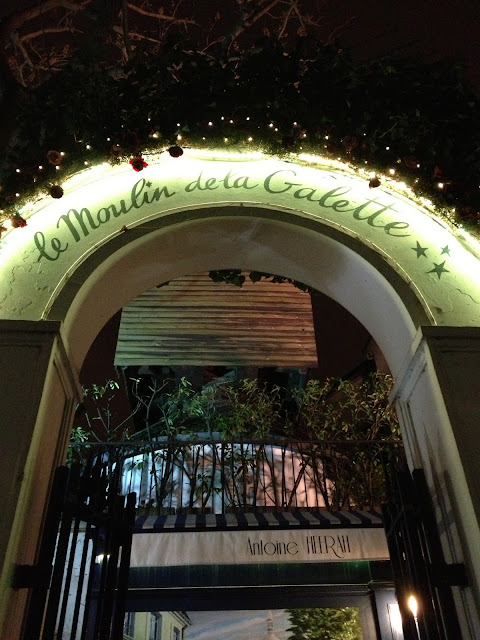 Le Moulin de la Galette - I think this is one of my favourite photos from the whole holiday. These lights changed colours as we stood and watched them.

We had an amazing dinner in a little pizza place called Trattoria Pulcinella on Rue Eugene Sue. There are so many pizza places in this area but Nic had read some good reviews of this restaurant, and pizza is a good bet for two vegetarians in France! It did not disappoint - in fact, we enjoyed it so much, we went back for dinner on our last night in Paris. After dinner we went for a walk around Montmartre and finished up with a glass of wine outside Cafe Le Saint Jean on Rue des Abbesses - one of our favourite haunts on our last visit to Paris in 2010. 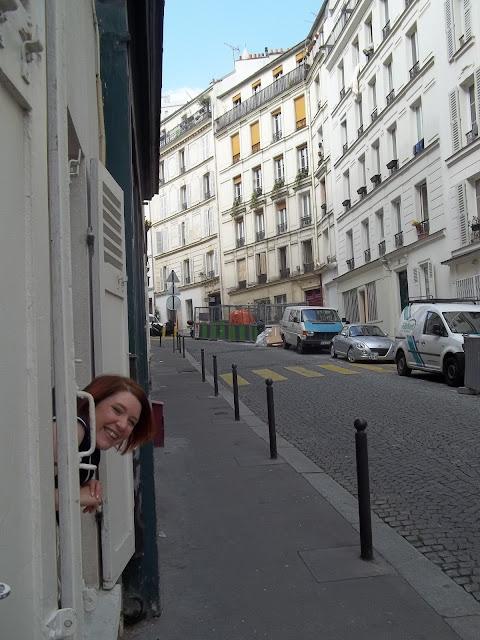 On Sunday morning we had a coffee in Cafe Les Deux Moulins on Rue Lepic - another favourite haunt in 2010, as it was just across from where we were staying! This time we were further away from this area of Montmartre but were determined to visit Fromagerie Lepic. We managed to buy some cheese just before the shutters closed at the end of morning trading, and hopped on the metro to Concorde. 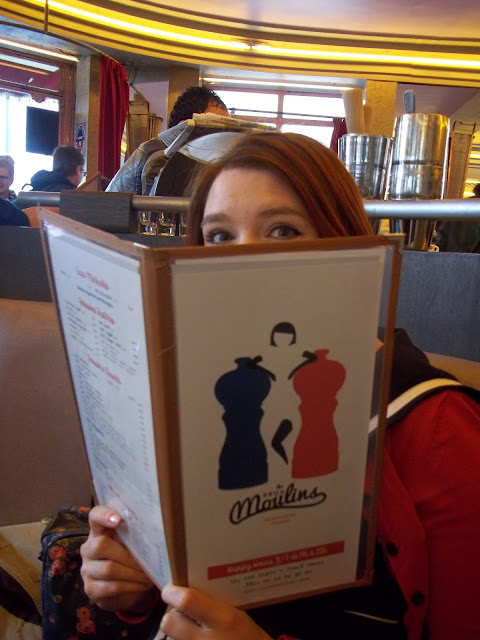 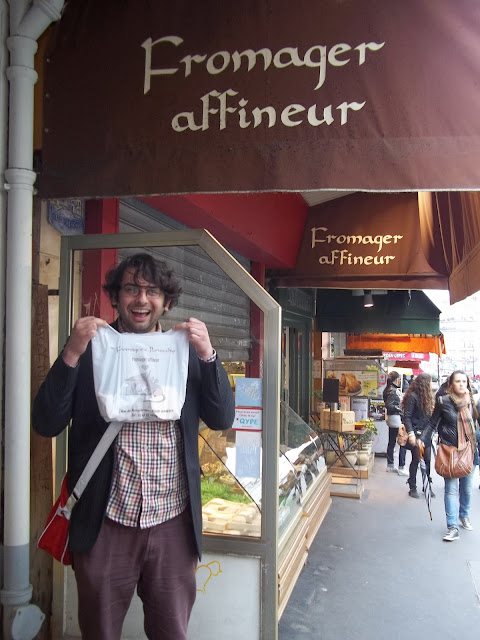 We had a picnic lunch of bread and cheese in the Jardins des Tuilieries, and spent the afternoon exploring the Latin Quarter and St Germain des Pres. This included a trip to Laduree for champagne and cake. Because you know, we were on holiday! 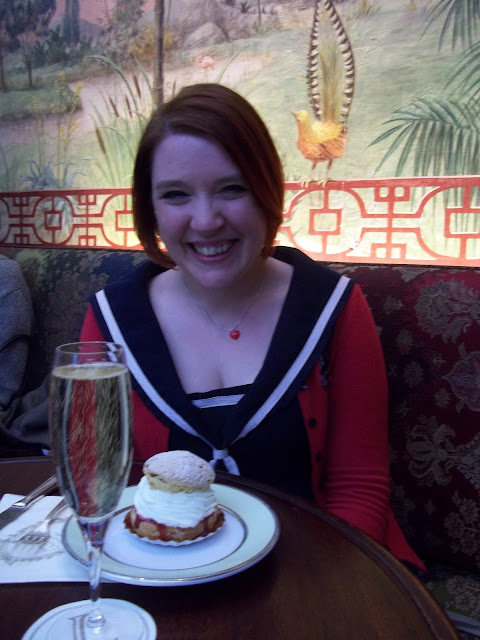 The champagne was amazing and so was that cream cake. I wish I had both of those right now. I know macarons would have been the obvious choice but I didn't eat any when I was in Paris! I don't love Laduree macarons, what can I say? But this cake was the BOMB, and the champagne was even more so. YES. Looking at this photo makes me happy.

The sun came out and we spent the rest of the afternoon at the Notre Dame, and then wandering the streets of the Marais district. 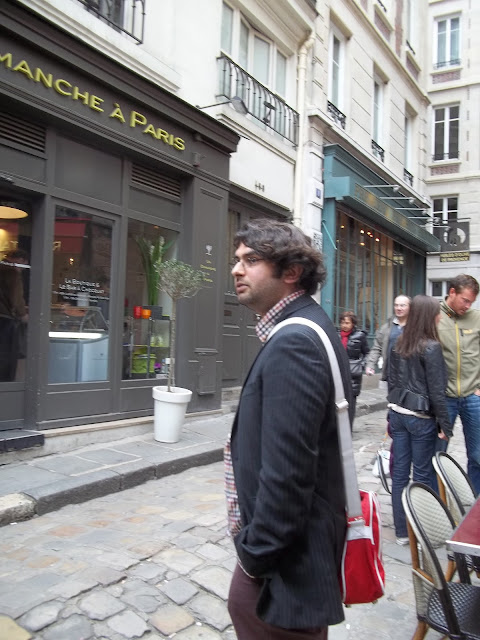 Nic in the Latin Quarter 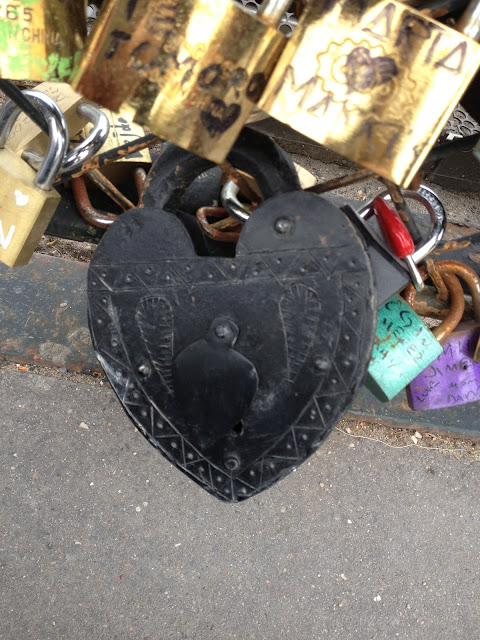 A love lock on the Pont des Arts 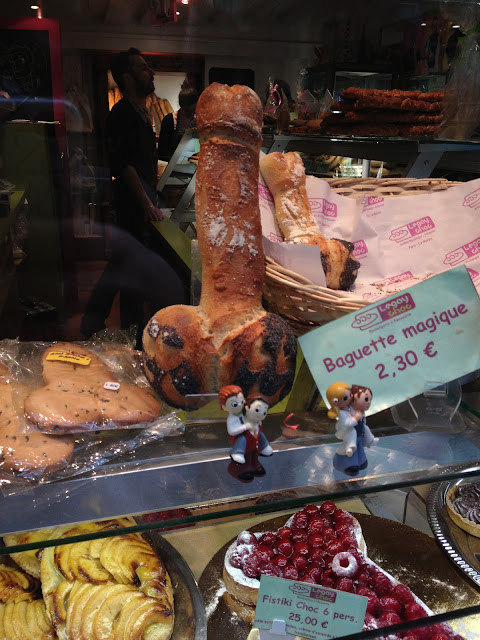 I bought some normal-shaped bread in this Patisserie before realising that EVERYTHING else was shaped like a cock and balls. Seriously, everything. I kind of wish I'd bought something cock and ball shaped.

After dinner and a drink around the corner from our flat, we took our tired selves to bed!

I did a lot of fabric shopping on the Monday, and I've already told you all about that. We spent the day just pottering around Montmartre, which was lovely. I honestly don't think I'd stay anywhere else in Paris, I love it there so much. It was a mild and sunny day, and all we did was walk for a while before stopping for drinks in cafes. It was bliss. After a rest in the afternoon, we went around the corner to a bar called Au Clair de Lune on Rue Ramey. I completely fell in love with this place. It was really cool, but not in that try-hard hipster way that makes you feel like an outcast, it was just cool. I loved the decor, the neon lighting, and the poster for Fin de Siecle by The Divine Comedy at the bar. I also loved happy hour - cocktails for 5 euros with complimentary bar snacks. 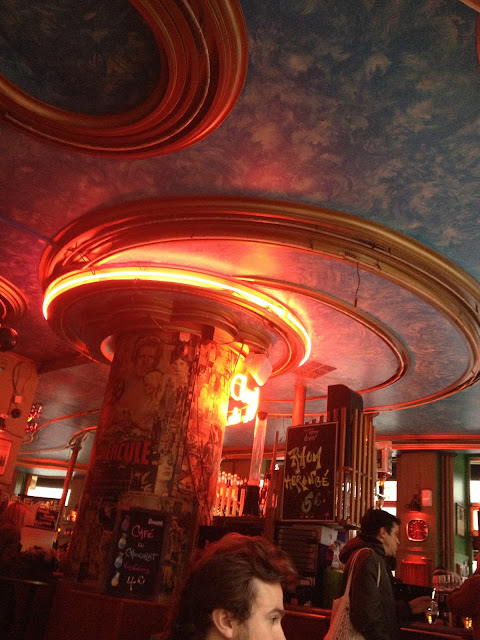 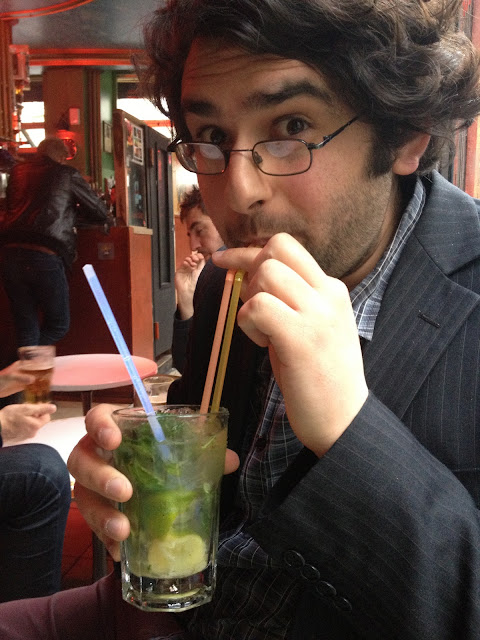 Nic with a tasty 5 euro cocktail 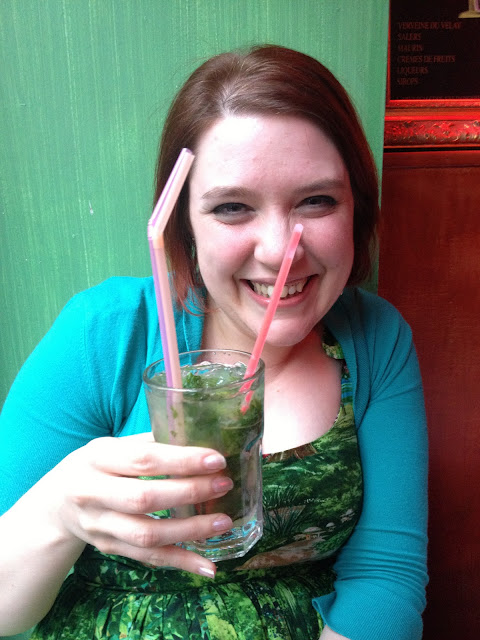 Drinking isn't all we did on holiday, but I have some happy drinking memories from it...

I loved the fact that the cocktails came with glow sticks in them! I know that sounds like a silly thing to get excited about, but it made me happy. We went back to Clair de Lune lots of times over the rest of the holiday and the bar staff came to know us - in fact, I think they found us a bit of a curiosity, but it was such a lovely place. This side of Montmartre is far less chic than the Rue Lepic side - it's much more diverse and there are some really shabby streets around Rue Clignancourt, Avenue Barbes and Boulevard de Rochechouart. Our nearest metro station, Chateau Rouge, was a little bit intimidating. But I loved the area - it was so vibrant and so varied, with lots of really cool bars and restaurants. I would stay there again, in fact I'd stay in our apartment again. I'd stay there again tomorrow if it wasn't for my pesky job and real life! 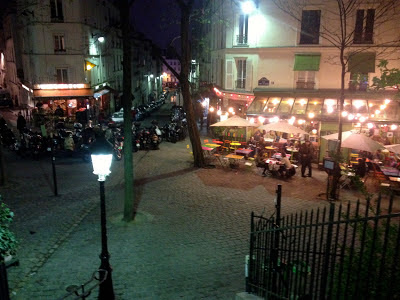 From the steps above Rue Paul Albert - our neighbourhood at night!
Posted by Roisin Muldoon