This isn't South Belfast, Ma'am. This could all kick off.

Hey everyone, remember me? It's been nearly two weeks since I blogged, which is most unlike me. Getting stuck into any new job would be challenging but my official first two weeks have coincided with a lot of other things. A busy period at work more generally, a crisis (which I can't really go into here, but something similar happened in the previous organisation in 2008 and the whole thing got shut down so, yeah) and seemingly constant changes in the team structure, with one senior team member leaving and two others announcing pregnancies this week! The pregnancies are obviously very happy news though, and one of the ladies is pregnant with twins!

So, the whole thing has been pretty challenging. I'll probably be taking on additional responsibilities in the next couple of months. That's exciting, though. One of the big issues with my previous job was how BORED I was, so I'm enjoying the challenge. For the time being, at least. I have been exhausted, though. I couldn't join the ladies at the big Birmingham meet up yesterday due to severe (and thankfully short-term) lack of funds, and I basically then spent most of the day asleep. I'm back in the saddle now though, and I think once I get my head around the new routine it's all going to be pretty good.

I have been sewing where I can and have three new dresses to show off soon - but in the meantime, here's a recent project that I'm pretty pleased with. I came home from work one day a few weeks ago to find a gorgeous surprise parcel from my friends at By Hand London containing their new pattern - the Victoria Blazer! Now, this was kind of throwing down the sewing gauntlet. I'm happy enough sewing dresses, but a jacket was a new challenge and one I felt I had to step up to. And I'm so glad I did!

As you can see, I went for the cropped version. I am the queen of cardigans, but a cute, casual blazer makes a really nice alternative. I think it looks pretty sweet with one of my many Elisalex dresses!

In terms of construction, this was pretty simple. Well,  it would have been if I hadn't been sewing while tired last Saturday. I got the jacket sewed up in an afternoon but it would have come together much more quickly if I hadn't done the following things:


AH HERP DERP DERP. None of these mistakes were the fault of the pattern or the instructions, I should add, I was just having one of those extremely dozy days! And you know when one thing goes wrong, then more things are likely to go wrong in its wake because you've cursed yourself. Heh. Even with all of my faffing around, this sewed up pretty quickly and I am sure I will make more. One thing I do need to say, and actually this applies to the Elisalex dress pattern as well, is that the drafting on the sleeves is STONE COLD AWESOME. I mean, seriously. They ease in so perfectly and so easily, they're such a joy! For the main fabric, I used some red drill from my lovely local Royal Fabrics (as mentioned by Karen in her Guardian column!) and I lined it with some stripy floral cotton lawn I bought in Paris: 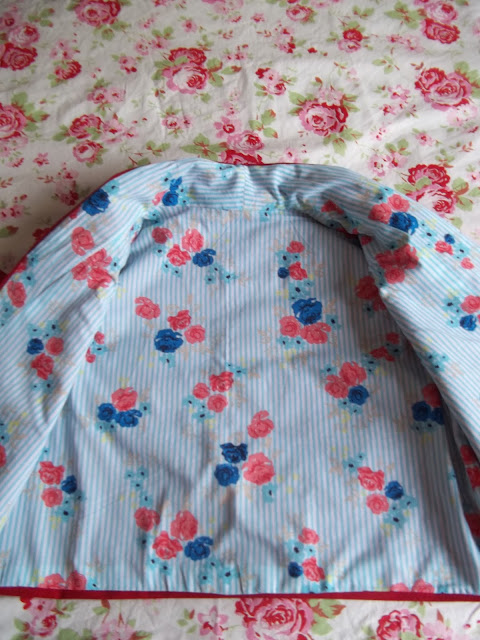 On closer inspection, I think I might have cut this out with the pattern upside down?

I actually have loads of this left, having bought it as a coupon, so I might make myself a wee matching frock at some point. In any case, it was pretty perfect as lining. I also accessorised the jacket with a portrait of my mentor: 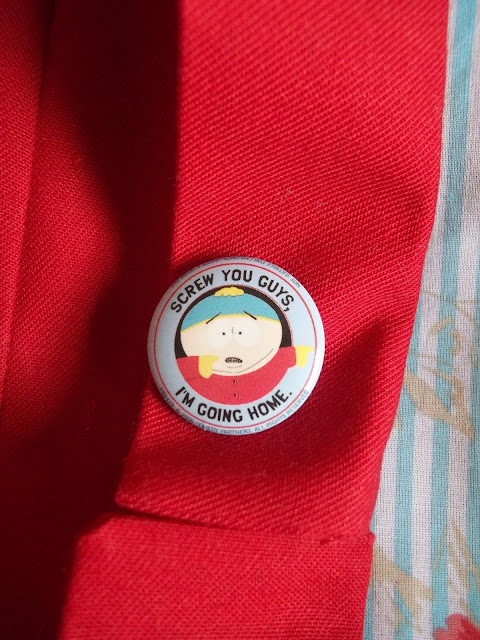 Based on my measurements, I cut the 12. The jacket is designed to be a loose fit and I like it a lot, which is surprising because it's not at all something I'd go for in a RTW jacket. I think for my next one I will go a size smaller though just to get it a bit more fitted.

Close up of the awesome

Sewing this has definitely whetted my appetite for sewing other outerwear. I know not every pattern will be as well-drafted and cute as this, but it's got me thinking that maybe there's a Sewaholic Robson trench somewhere in my future. I feel like I could take this on, in spite of the few (ha) issues I had (with my own stupidity) in sewing this. I at least need to make enough of these to match my Elisalex dresses because the patterns work so beautifully together!

I wore this today for a little swan around town, and I also took the chance to show off some new shoes!  Last week Surfdome got in touch with me and asked if I'd have a look around their site and choose something from them to review. Now, I'm not much of a surfer, being that I can't even swim! But I looked at the site to be polite, and found that as well as stocking lots of surf and skate wear, Surfdome also stock one of my favourite brands, Irregular Choice. I chose these Patty shoes because: polka dots. 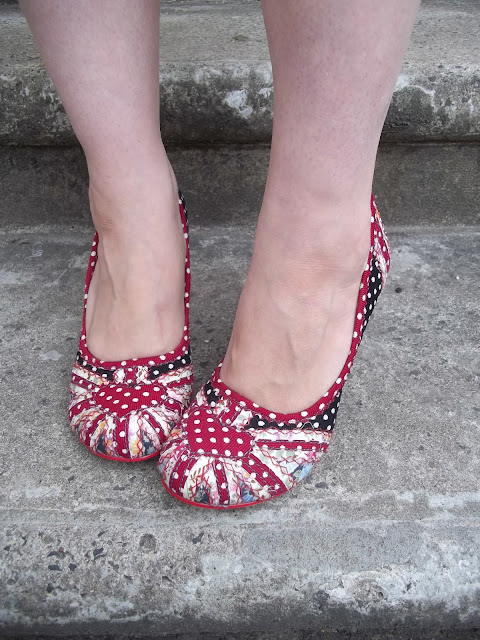 Of course they're quite ridiculous, but very pretty. I'm really happy with them - and I certainly have enough red or polka dotted clothes to wear with them!

I did take them off in the afternoon though, as I spent it down in the Pump Room Gardens at the 35th annual Leamington Peace Festival. Not much to report except dancing, chatting, eating and hanging out with my friends and with my Dad and uncle. And, did I mention eating? 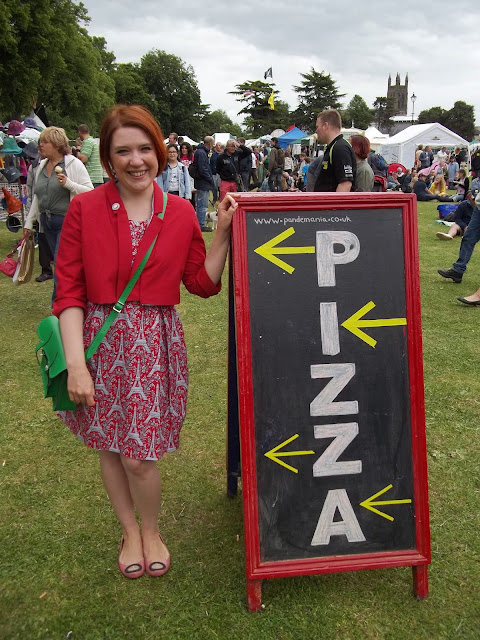 It was good pizza. Both times.

So, that's the craic with me. Oh, but one other little thing - Handmade Jane emailed me a while ago to tell me I should check out Cloth Magazine, and here's why! 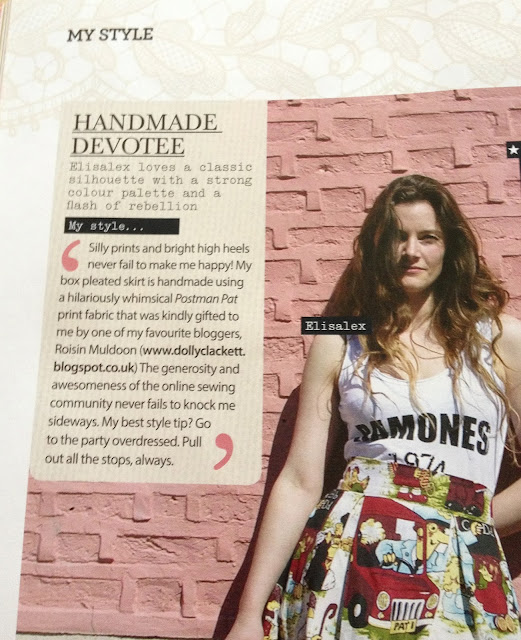 First of all, could you not just eat Elisalex up? She's so adorable! (So is Charlotte, who I shamelessly cropped out of the photo to get to my bit, sorry Charlotte) But, this was nice to read because I agree with Elisalex's tip - when have you ever known me to be underdressed - and because she's so right about the kindness and awesomeness of the online sewing community. I was so touched to get the Victoria pattern in the post, I've had a blast every single time I've met up with online sewing friends. Damn, this stuff is good!

Right, I'm going to leave you with one more picture of my OMG FASHUN BLOGGER POPPED COLLAR and then I'm going to finish my Elderflower Collins and go to bed. Rockstar.

I MADE A JACKET AND I'M SMUG ABOUT IT.
Posted by Roisin Muldoon