Jet from Gladiators to host a barn dance at Yeovil Aerodrome. Properly policed. It must not, I repeat NOT, turn into an all-night rave.

Hola lovers! Apologies for my absence - things got very busy here in Clackett Mansions - mainly work, but some fun too. Maybe I should catch up in chronological order but I'm what they call a maverick so, I'm not going to. I know how to live on the edge, me.

So anyway - yes, my work has been super busy and Nic was really busy too, so the last couple of weeks have been pretty much a blur. I did manage to get some sewing done in that time though, and some socialising as well. Last month Clare of Sew Dixie Lou invited me and Nic to a little dance party that she was going to be having at her flat on 6th July. Well. I couldn't pass up the opportunity to meet Robot Don and Mr S, could I? I was also pretty gutted to have had to miss out on the By Hand London Club Tropicana party due to having to WORK ON A SATURDAY. I was all ready to party. I just had to make a new dress. Well, obviously.

As usual, I had some inspiration. A couple of weeks ago my friend Lauren tweeted me to say she was in the Limb shop in Manchester. Her twitpic of the rails and rails of beautiful dresses reminded me of a sewing plan that's been on the back burner for the while - to make my own version of this beauty: 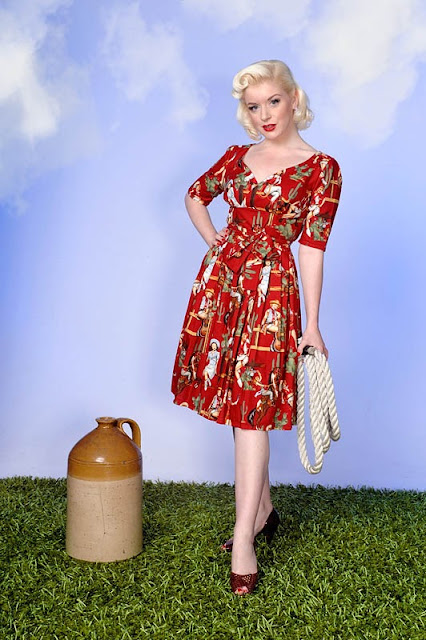 You may recognise the fabric  - it's From The Hip by Alexander Henry, and a firm favourite of mine. So much so, I've already made two dresses from  it, my Cowgirl Cambie and my Calamity Jane dresses. So I really couldn't resist the red colourway. After making the Toto dress last week, I had a sudden thought that maybe the pleated skirt of NL6824 could be paired up with the bodice of Elisalex to make a beautiful mashup. I measured the pattern pieces and they fit, and I made one as a test garment - which is awesome, but which I haven't photographed yet. Then it was time for cowgirls!

The Dolly Holiday dress - Elisalex bodice and skirt from NL6824

This bodice really is the absolute shiz. I love it so much, and I love how it works with the lovely, full pleated skirt from New Look 6824. There's not much to say about it because I followed the bodice instructions from Elisalex, the skirt instructions from the NL pattern and blammo, I had a dress that I loved! It was really too hot to wear it on Saturday, but it was really too hot for anything.

I was posing with the beautiful Leamington Spa sign, but I was tickled to find that I was also standing in front of a sign that read 'Loco' like, fair enough.

I named it the Dolly Holiday dress, after one of my favourite books - The Dolly Holiday by Anne Dunlop. Helen Gordon is one of those characters that got under my skin at an early age, and I think she's marvellous. After finally sleeping with her unrequited love, the cold and distant Richard, Helen decides to move on. She gets a job in a Wild West Theme Park in Portrush.

"Sandra had helpfully highlighted the one suitable job for this week. Assistant to an Assistant at the newly opened three million pound European grant-aided Wild West Theme Park in Portrush.
She advises that I read Last of the Mohicans, Sarah will brief me on Little House on The Prairie and I will watch all of Daddy's John Wayne movies.
I felt excited about the Assistant to the Assistant position. Perhaps I will be dressed like a cowgirl, or better still, a whore in a saloon bar. Fulfilment of my kinkiest fantasies."

I guess that's all pretty meaningless if you haven't read the books but Helen has been important to me over the years, I'm glad to be able to pay her some small tribute. 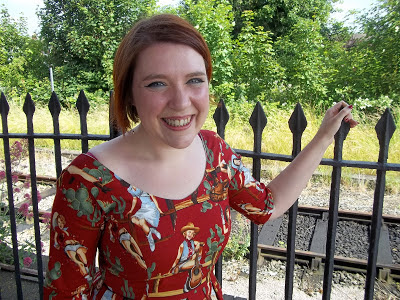 A little close-up of the bodice, and the wrong side of the tracks.

Anyhow, Nic and I caught the train to London on Saturday morning and before long we were south of the river at Clare's house - where we were joined by fellow Spoolettes Rehanon, Emmie, Nicole, Alison, Jo, Fiona, Sally and Amy. Mr S was there too, and so was Alan: 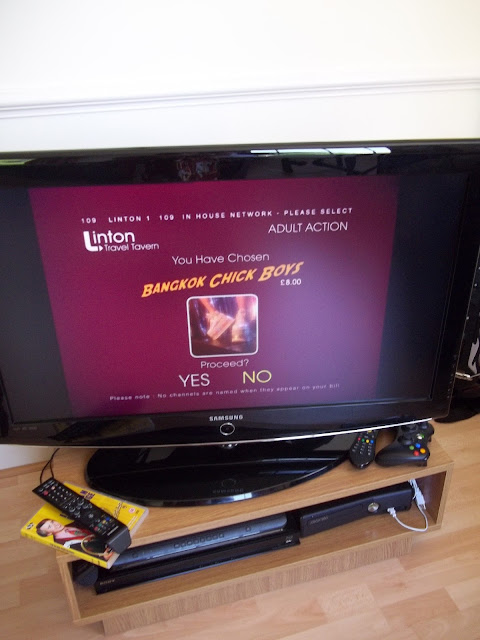 Anyway, what I'd like to do is show you lots of photos of us in our handmade best, looking gorgeous. I'd like to do that but I can't, because a combination of drinking in the daytime, the heat, the dance floor and the excitement kind of did me in. Nic took lots of drunken blurry photos of the walls and stuff, but you probably don't need to see that. 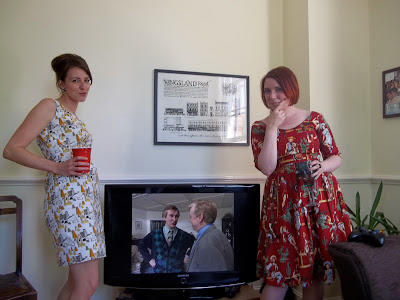 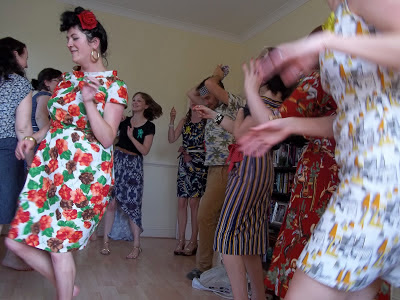 This photo makes me laugh so much, but it might give you an idea of the dancefloor action. There are also about a million photos of Clare dancing her ass actually OFF, but really I don't think she'd welcome me putting them on the internet. Oh go on, just one then, because she was fabulous. This is honestly the least obscene one. 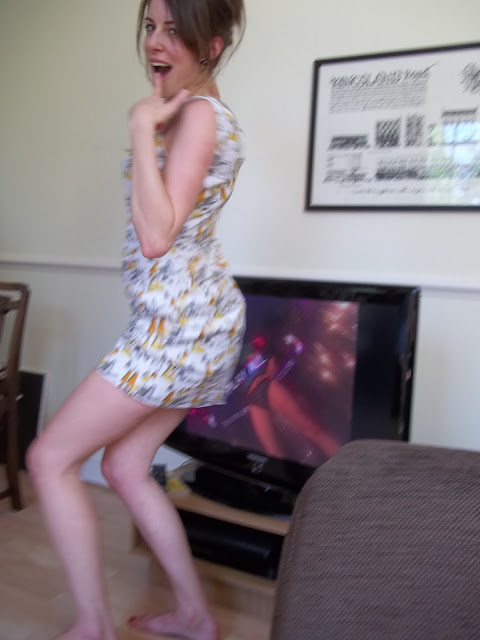 She's my PA. Hard worker, but there's no affection there.

So anyway, Nic and I had planned to take the train back home to Leamington on Saturday night. However, I basically got completely shitfaced and after falling asleep on Clare's bathroom floor, and then the floor of her hallway (you stay classy, Roisin!) I had to admit defeat somewhat. Clare and Sally got me and Nic to bed - they put me in pyjamas, Sally rubbed my back while I was being sick into a bucket and then Clare took my eye make-up off for me! Rehanon did a corner-shop dash to get us some fizzy drinks to settle our stomachs in the middle of the night. I was a fucking mess, in short, and Nic wasn't much better and we were so well looked after. If you ever needed proof that people who sew are awesome, Clare even took my earrings out before I went to sleep.

Anyway, it was a really excellent party and Nic and I dragged our carcasses home yesterday morning. We spent the rest of the day hanging out in the shade at home, it was lovely. And, having both had a really intense few weeks, we spent a lot of yesterday feeling really bloody lucky to have had such brilliant people to have fun with. Learning to sew has made my life better in so many ways, but I never could have anticipated the really amazing friends it could help me to make. FUCK YEAH SEWING, in essence.

I will catch you all up on the rest of the last week or so shortly - and tomorrow I'll draw the winners of my Simplicity 2444 giveaway! But for now, goodnight.
Posted by Roisin Muldoon