No round envelopes for me! No way, Hose.

It feels like it's been an absolute age since I blogged. It's just been a week, but it's been one of those weeks where life pretty comprehensively got in the way. Not even in an exciting way, either, mainly work. It's been one of those weeks where it has felt like every bit of my spare time has been accounted for. My manager was on leave last week so I had a pretty full schedule. That was nice, in a way because I am still really enjoying my new job. I'm basically waiting for the other shoe to drop because I know things are about to get pretty intense in the next few months, but it's been so long since I enjoyed my job that I'm just enjoying enjoying it!

I did do some sewing though, and I even started to get some non-sewing related blog posts organised in my head so I will try to be a slightly more conscientious blogger over the next few weeks.

As for the sewing - I made the most of the time-saving of working from home (no commute! Hurrah!) and I was even able to squeeze in a bit of lunch-time sewing on the two days I worked from home last week. Well, you all didn't think I was going to make just one Anna dress, did you?! At the beginning of last week, I cut into some of the fabric I had bought on the Goldhawk Road. I bought two metres of red polka dot fabric with an Anna in mind - once again, the Goldhawk Road came up trumps for good quality polka dot cotton! You'd think it wouldn't be hard to find, but everything in my local stores is cheap cotton poplin with nasty-ass dye that fades immediately. So, this fabric was about £4.99 a metre, I'm not sure which shop it came from but it was one where the young man who served me was an awesome salesman because he managed to also sell me two metres of another fabric. By complimenting me, like, because I'm pretty shallow like that. Anyway - the dress: 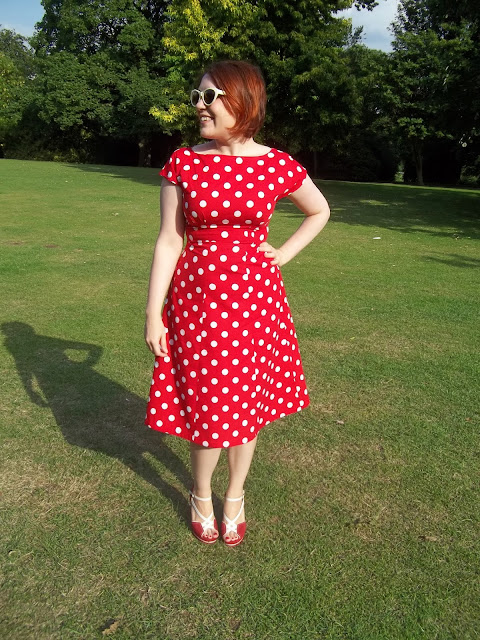 So, no real construction notes this time around. As you can see, I sewed the midi length except I didn't - I cut the skirt between the midi and the maxi length because I like my skirts to hit below the knee. I french-seamed the bodice as before and pinked the skirt seams - oh, and I sewed the pleats as the pattern directs this time around too! I love love looooove how quickly this dress comes together - in a matter of hours, really, so there is a genuine danger that my wardrobe may become as full of Anna dresses as it currently is of Elisalex dresses and Elisalex variations. 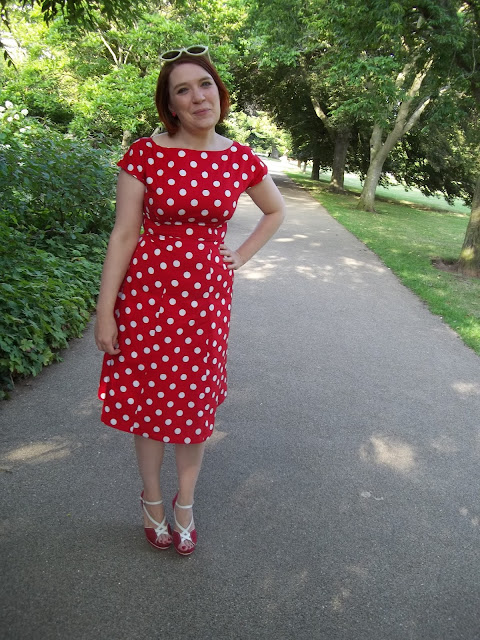 I'm basically delighted with this dress. I think the shape of the dress is a perfect match for the polka dots. I'm very pleased with the finish, particularly with my concealed zip, which looks brilliant. I love the bodice and the sleeves, I think it's such an adorable look! My only slight reservation is that I think this particular dress could have done with a bit more ease. It doesn't feel tight but the skirt rides up a bit at the waistline, which indicates to me a slight stomach/fabric conflict. Not enough that I can't wear the dress - I wore it to work today and it was grand  - but I guess one of the things about blogging is that I feel compelled to point it out. Like, if I don't, people will be shaking their heads all "Bish, PLEASE" - you know?

I think that, in this case, the variation is down to a difference in fabric weight. The sizing here is exactly the same size as my Beauty School Dropout dress, which fits fine. The other thing is that my stomach is the bit of my body that shows the most variation if I haven't been eating brilliantly for a few days - and I didn't especially last week. So I'm not concerned, it's certainly wearable. And will be more so after I've eaten some more vegetables. But you know, I wanted to point it out in case anyone feels the need to be all "hey fatty, zipping =/= fitting" because, I know.

Damn, that was a bit intense. Here's a few more pictures of the dress, though: 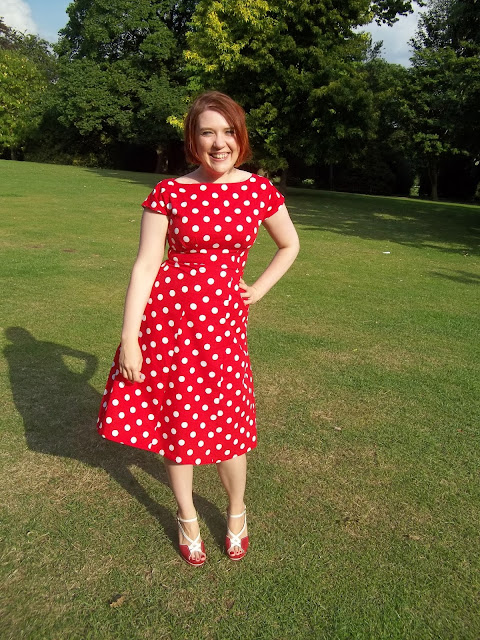 Because, all griping aside, this is really what I want from a red polka dot dress. It's really cute but not too ridiculously over-the-top girly either. A colleague did liken me to Minnie Mouse today, but to be honest, that's a gauntlet I run most days so no biggie. 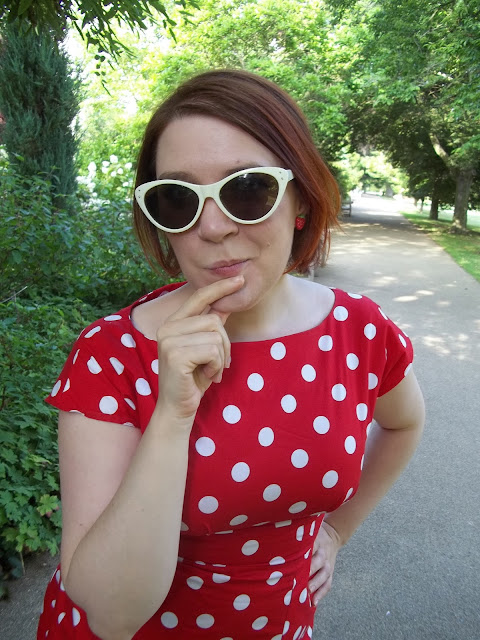 It's hard to see why I'm constantly being compared to a cartoon character...

I wore this to the park last Tuesday afternoon for a walk after work. Nic and I were both feeling a bit stressed and a walk in the sunshine cheered us both up. I'm having a strangely melancholy August. It's weird to feel the year slipping away so quickly, a feeling that is magnified by the fact that it has turned a bit chilly again. It's also partly that I have a week off coming up at the end of the month and now I know it's coming, I'm aware of how tired I am and how intense work has been. It also doesn't help that I have been freaking myself out by reading about unsolved crimes and also conspiracy theories online recently! There is some freaky shit out there and reading about it is not good for me. Even though I don't believe, like, 99% of the conspiracy theories, they still freak me out. The internet is bad for me. It's how I found out that I'm one of those people that is really freaked out by lotus seed pods. Don't tell me about the surinam toad, by the way, I know I'm going to have to avoid that shit for life now. I'm a dick, basically. And I need a holiday!

Hey, so this post has been all the feelings and a dress! Go me, I am doing excellent blogging. But it is a cute dress, and looking at the photos has definitely alleviated some of my worries that I'm a big chubby chubster. So, that's good! Also, look at my beautiful assistant: 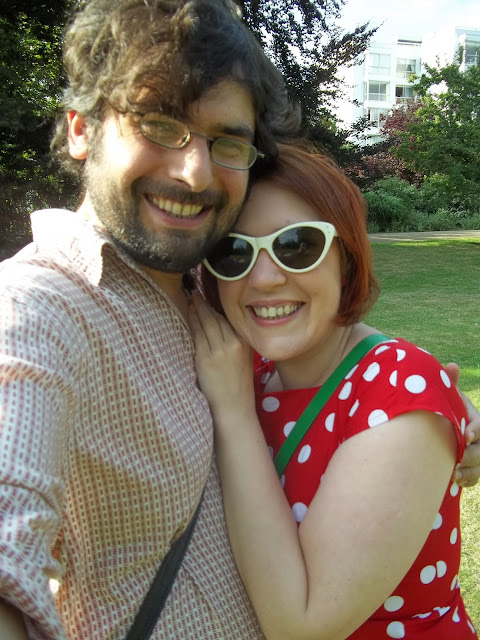 He helps me pick out fabric, he takes my photos and he proof-reads my blog posts. I love this guy.

Okay, I have rambled a bit this evening. So here's the TL:DR of this post: 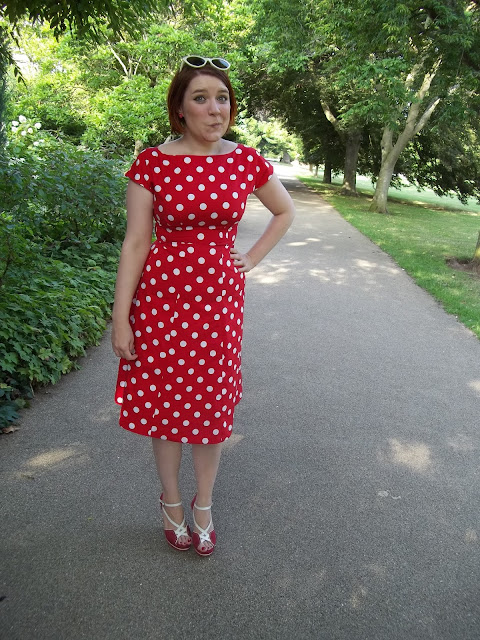