Don't shoot until you see the green of its tentacles.

It's FRIIIIDDDAAAAY! I'm feeling especially buoyant about that because I'm on leave next week and I am looking forward to a week out of the office like nothing else. Sweetening the deal is the bottle of very nice champagne that's currently chilling in my fridge; an engagement gift from my colleagues.

It's been a good week. A VERY busy week but a good one. So that analysis I was wigging out about last week? Well, we had the meeting where we reviewed it all, and that went very well. Other colleagues, including our organisation's deputy director, had also reviewed the data and we reached similar conclusions. So that was good because I knew I was on the right track. Then, at the end of the second day, the deputy director wrote to me to say he and the head of my department had been impressed by my analysis, with my contributions to the meetings and by how well I was settling into the role. That was an amazing confidence boost for a lot of reasons, as I'm sure you can imagine. I wanted to be challenged at work and to be stretched, so when I was it was worrying to think that maybe I wasn't up to the challenge. It's good to have feedback that I'm rising to it! Of course, it's also nice to be noticed. So, it's been a good week, and I feel like that email has slapped my stupid inner critic in her bitchy mouth. Hurrah! It's certainly nice to go off on leave feeling like I deserve it.

I have a bit of a backlog of things to show you and things to talk about, so here's another Anna variation I sewed a couple of weeks ago to get started with. Much like the Elisalex bodice, I'm finding my imagination is fired up by ways to make Anna variations. I'm a die-hard By Hand London fangirl now; I'd think it was a bit sad if it wasn't resulting in so many dresses that make me happy. 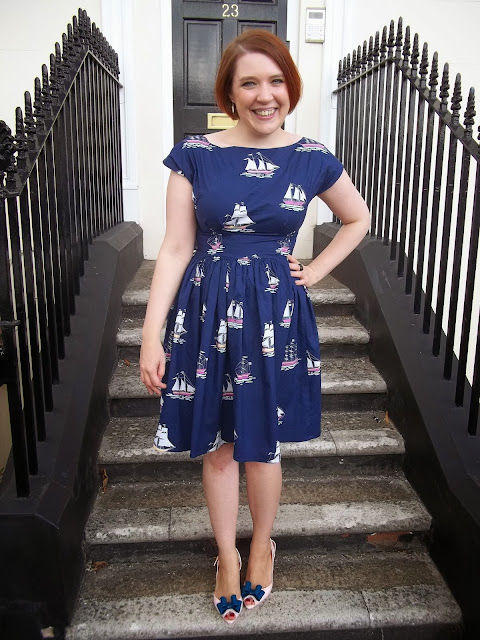 If I look a bit... mental here, it's because these photos were taken during the Leamington Food Festival, and I'm all hopped up on Colombian food and Rocky Road toasties! And look, Emily - YOU CAN SEE MY KNEES! There isn't much to say about the construction of this dress that I didn't say about the Booklovers dress, it's just a gathered skirt. The fabric is My Favourite Ship by Sarah Jane for Michael Miller and I bought it from the Eclectic Maker. It's a quilting cotton and is 45" wide, and I only bought 2 metres, which is why the skirt is a little shorter than I'd usually go for. That was deliberate though - I don't really do autumn/winter clothes, but I am planning on wearing this with hot pink tights so the shorter length works well with that. And, you know, MORE NAUTICAL FABRICS. 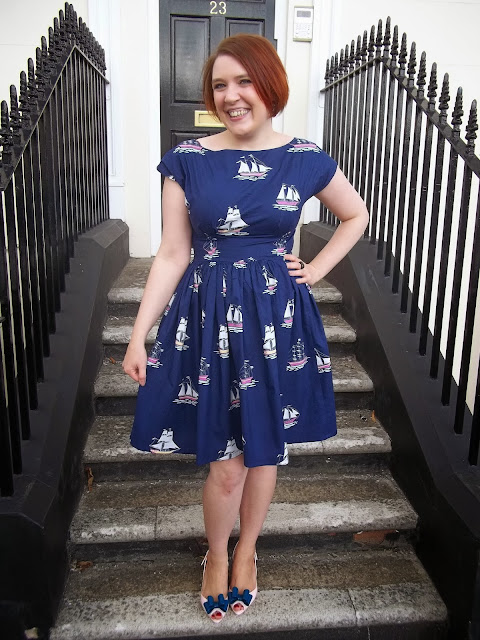 Looking at these photos I see there's some wrinkling going on around the bust. This is at least partly an ironing issue but it's also definitely a slight fitting issue. It's not anything I'm losing any sleep over but I'm going to look at doing a slight full bust adjustment on the Anna bodice - at least for when I'm sewing it in a slightly heavier fabric like this cotton. I've just done one on the Elisalex bodice - spurred on by Emmie's stellar work on her Oz dress, and by having to buy some new bras because I've gone up a cup size (although pleasingly, this random weight gain is not on my waist. So, win, I guess?) To be totally honest though, and maybe this makes me a shockingly lazy and shitty seamstress, I'm happy to live with what I consider to be a fairly minor fit issue here. I'm not going to wear this dress to the Oscars or anything, I'm going to be wearing it to work. The way I see it, you've got to pick your battles. It's a cute dress, I look cute in it, I'm happy enough.

I named the dress the Fang Rock dress because it has boats on it, and because Nic and I recently watched the wonderful Doctor Who serial Horror of Fang Rock. In it, the Doctor and Leela get lost on their way to Brighton and they find themselves at a lighthouse on Fang Rock, which I guess is somewhere off the Sussex coast, in Edwardian times. Needless to say, bad stuff happens. It's a really good fourth Doctor story, and I think Leela is an absolutely brilliant companion - she's such a fucking badass. She takes absolutely no shit whatsoever. I could do with being a bit more Leela, to be honest. You can read an excellent recap of Horror of Fang Rock over at one of my favourite blogs, Wife in Space. And you should. 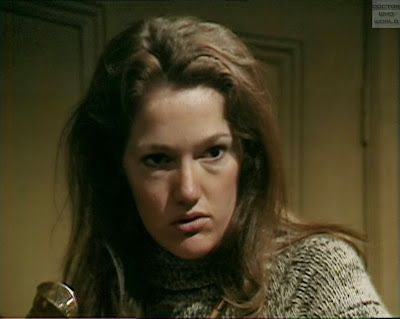 Fucks given by Leela: NONE.

I somehow neglected to get Nic to take a photo of my lovely shoes, but they are truly lovely. Check it out: 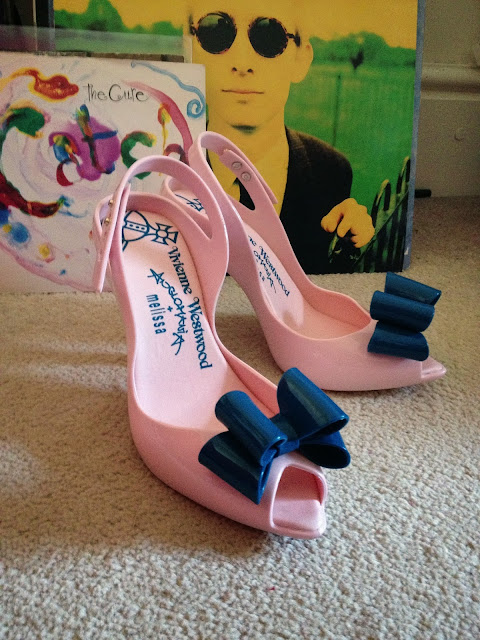 shooooooooooooes - plus in the background, Neil Hannon's adorable beaky wee face. When I was at home a few weeks ago I unearthed my teenage vinyl collection and brought it back with me.

I have been after these shoes for a while, and I bought these on the day that Nic and I got engaged. I went into Cruise in Belfast and they had them for half price, in my size. So I jumped up and down a bit and decided to buy them (despite having already bought three pairs of shoes that week, and under strict instructions from my mum not to buy any more) The salesgirl went to get the other shoe in the pair... and didn't come back for ages. Nic joked that they weren't going to be able to find the other shoe, and it turned out he was right and I couldn't buy them. The size 4 I wanted seemed to have been mistakenly sold alongside a size 5. The wee girl in the shop was mortified, and I was a bit sad - I know it's shallow, but I love the shoes and having had them in my grasp, it was a bit gutting to then be told I couldn't buy them. Anyway, we left the shop and went to Muriel's, and on the walk over there poor old Nic was so upset that I was disappointed. And it's going to sound slushy as anything, but it's one of the things that is so wonderful about him - he never thinks I'm trivial or shallow, and he wants me to be happy, and I think I'm extremely lucky to have found such a darling man. When he was at the bar in Muriel's buying me a cocktail, I found somewhere online selling them in my size at half price - which is totally weird, because I hadn't been able to before - and I bought them. And then we moved seats to a comfy sofa, got drunk, and got engaged. So these shoes are always going to be very precious to me. 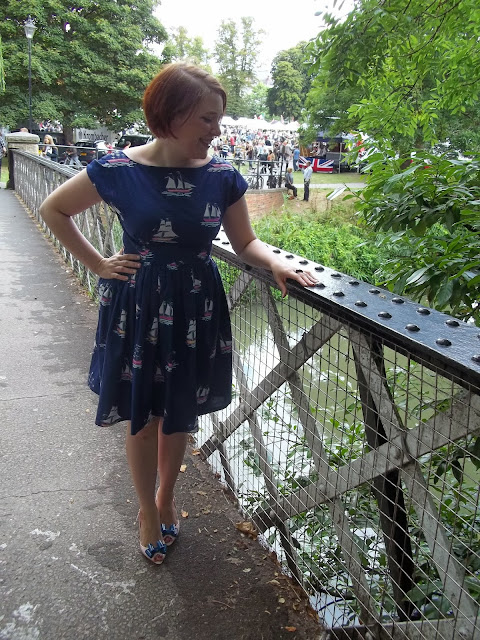 You can't really see the dress here, but that's all right because you've seen it already. However, you can see a bit of the food festival in the Pump Room Gardens and the river. I love this bridge. After this photo was taken we bought some freshly ground vanilla coffee from one of the stalls and then I had a minor rage stroke at being pushed around by middle class foodies so we had to go home.

That's me for the evening. I'm off to celebrate my week off by cracking into that champagne. YES INDEED. Happy weekend, everyone!
Posted by Roisin Muldoon