I'm not superstitious, but I am a little stitious.

Hello everybody! This week has been crawling by at a snail's pace, has it not? I can't believe it's only Thursday afternoon when it should clearly be Friday by now. Bah!

It's been a weird week. I wonder if it's the change in the seasons or what, but I have been feeling very anxious and emotional. I think September is a hard month for a lot of people, and I've been struggling with the low light and generally dismal weather. It all seemed to culminate in a fit of the blues yesterday afternoon and evening. I've been busting my ass doing a big piece of data analysis ready for some work that my team need to start on Monday and it's been going well. It's not something I've ever had to do before, and after some training and being given a crib sheet by a colleague I was up and running and doing grand. I even found it enjoyable - something about extrapolating conclusions from the data was interesting and even exciting to my nerdy soul. I felt good about learning something new and being able to apply it. But as soon as I finished it I had a major freak-out about it. Not for any reason - certainly nobody has looked at it and criticised it, and in fact all of the feedback I have been given about how I've been getting on in this new job has been really positive. But all yesterday evening and all last night I got myself convinced I'd done a crappy, half-assed job. It was a serious case of Impostor Syndrome.

Here's the thing, though. The Bloggess has it spot on, Depression lies. Anxiety lies. The voice inside my head, that shrill and bitter inner critic, is lying when she tells me I'm a fraud. It's hard to hold onto that when it's the middle of the night and everyone is asleep and you're convinced that because maybe you didn't perform as well as you might have liked on one work task that every single thing you do is complete shit and everything about you is pointless and worthless, but it is a fact. Depression lies, and Anxiety lies, and my Inner Critic can GTFO, to be frank.

Of course, in the light of day, after a cup of coffee and a little cry about my fears to Nic, I'm feeling a lot better. The analysis I've done is good, and I know it is, and if it's not as good as it could be it's because I've only been in the job for a few months. I'll get better at it. The other things, those other doubts that came screaming in - well, I'm working on those. It's frightening how quickly I can go from feeling grand to feeling fucking awful, but I suppose at least it can swing back the other way almost as quickly.

So, that's a bit of a break from my regularly scheduled programming of me showing you dresses and stuff. But, I don't know, it felt like an important thing to share. I know lots of people struggle with these sorts of feelings and I find it a comfort to talk about it. Thanks for reading.

And for sticking with me this far, here's a dress. And some new shoes! Noel Streatfeild once observed that "There is no doubt that a new dress is a great help in all situations." I've always liked that quotation - partly because it's something I can imagine the Provincial Lady saying. You know, if she were a real person. I think the same idea can be applied to shoes. Especially ridiculously over-the-top colourful shoes: 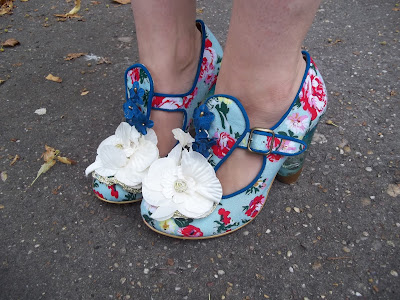 I wore these on Tuesday and every time Nic looked at them he laughed. Not in a horrible way, but just because they're pretty gaudy. Even by my standards, they're quite loud. Irregular Choice don't do things by halves, and these shoes aren't even their most out-there style. 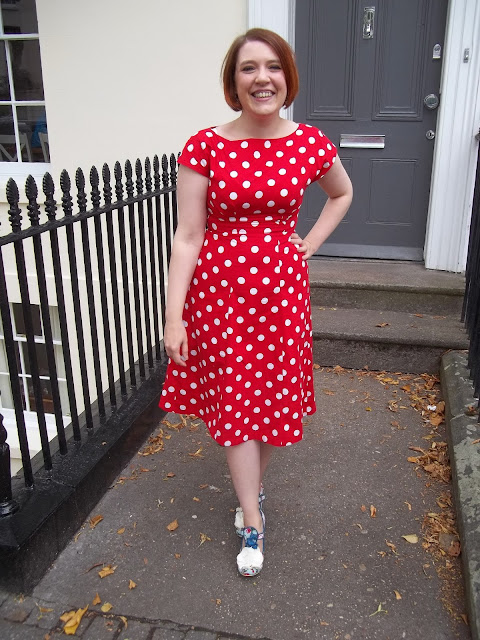 Electric Boogaloo Anna dress. One day I will learn to stand up straight when there's a camera on me. I hope.

Of course, it was cold on Tuesday because I guess Autumn has come early and is being an asshole about it. So I have a thermal slip thing on under this dress (it gets cold in our flat) and I also accessorised with this rather fetching and not at all ugly cardigan I got last year in H&M when the heating was broken in our office... 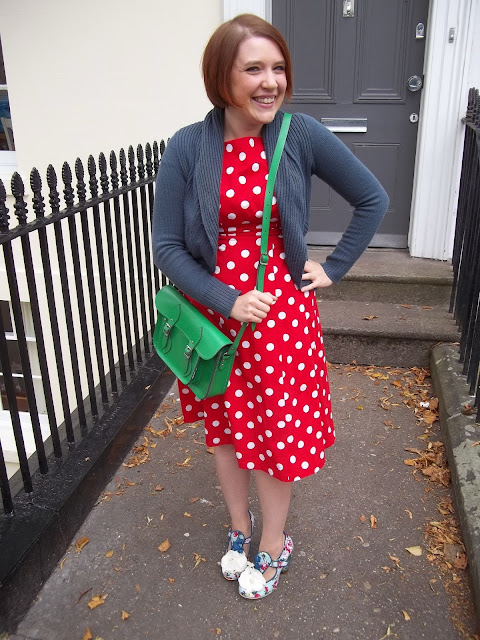 I think this cardigan is seriously fug, you guys, but it is warm. I like the rest of what I have on here, anyway.

I'm going to briefly indulge in a bit of self-promotion - I'm going to be teaching again at Berylune this coming Sunday, 15th September. The workshop is called A Day With Dolly Clackett (I didn't name it!) and it's an introduction to sewing from a sewing pattern. There are still a few spaces left if you're in the area and would like to come along, and the homemade cake that is provided is very good. Don't worry, it's not baked by me.

Anyway, it's time for me to get off the internet and get out into the daylight for a bit. Thanks for listening.
Posted by Roisin Muldoon