Heaven is a place where nothing ever happens.

Evening! As it's gone all grey and chilly again, I'm going to try to mentally warm myself up by blogging some of the pictures I took when Nic and I visited his parents last week in Kent. Apparently we're due more good weather during October, but I'm skeptical about that so I'm going to reminisce over the sunshine I have enjoyed, hey?

So, Nic and I left for Folkestone last Sunday, and as it was the first time in ages that I'd been to the seaside, I made sure to pack some of my (many) nautical themed dresses. This tickled Nic's mum, who has just redecorated a bit, giving the soft furnishings in her living room and kitchen a more seaside feel. So I kind of blended in, ha!

On Monday morning we went to Dover to visit Nic's grandparents, and in the early afternoon we went to the seafront. Dover is such a strange town but despite the ferry port, the seafront is pretty cool. Although, I was genuinely freaked out by the enormous seagulls. Some of them were bigger than my parents' dog. 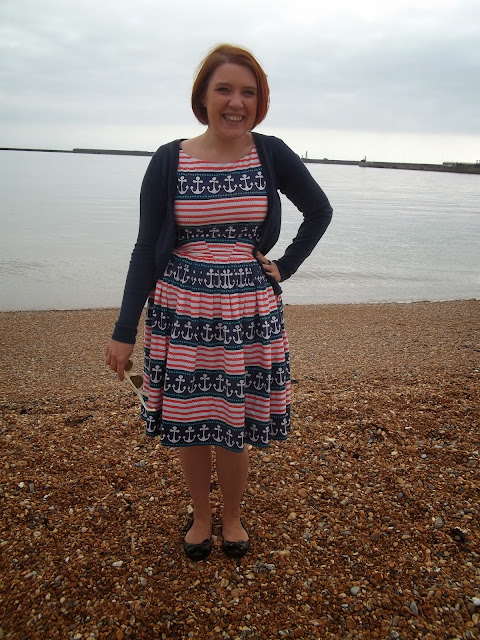 Stay the Course dress and Mel by Melissa flats 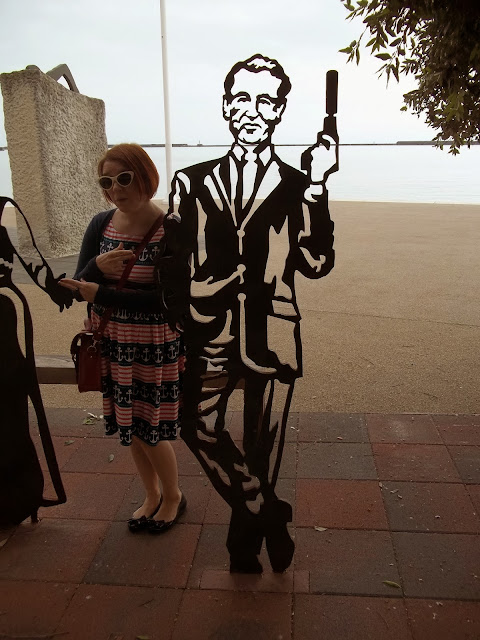 Here I am with Ian Fleming. He had a house in St. Margaret's Bay, which is just along the coast from Dover and the book of Moonraker is set in this part of the world.

On Monday evening, we walked along the seafront in the sunshine to meet our friends Mr and Mrs S in Folkestone. It's funny, you know. I've kind of always thought of Folkestone as being Coventry-by-Sea (hey, I'm allowed to be a bit snarky about Coventry. I lived there for 6 years and I work there now) but actually, much like Coventry, Folkestone has some beautiful places if you know how to look for them. The walk along the coast from Sandgate to Folkestone is one of them. 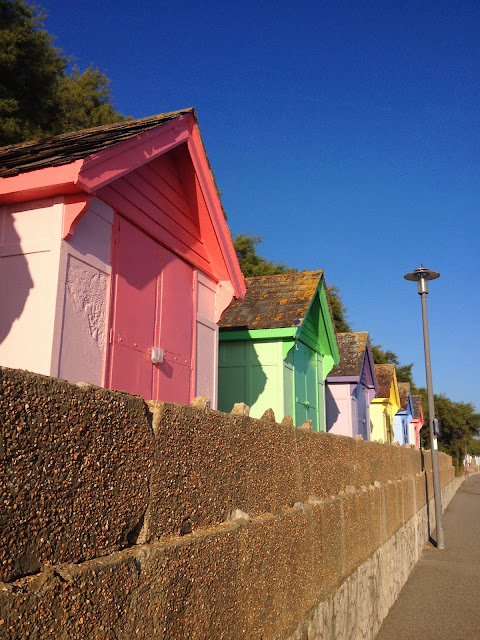 The last time I visited Folkestone, these beach huts were pretty ugly. They're made from concrete slabs, but in the time since, they've been painted. As we walked along, we saw lots of people enjoying the evening sunshine and the sound of the sea with a glass of wine in their own little beach houses. It made me pretty jealous, I must admit!

We were meeting Mr and Mrs S in Rocksalt, which is in the old fish market part of Folkestone. This is a little bit of town that I'd only ever been through on the bus - and from the top deck of a bus it looks really skanky - but on the ground it's lovely! To get to the bar, you walk underneath the arches of the old goods railway and from there you just enjoy a view of the sea. The bar has an excellent two for one on cocktails deal at Happy Hour, so it was rude not to really... 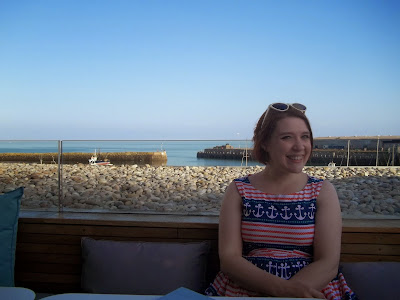 This is a happy place. A champagne cocktail in the sunshine by the sea. Bliss!

We were tipsy and happy as we walked back to Sandgate for dinner, and I promptly asleep on Nic's shoulder while we watched an episode of The Barbara Stanwyck show.

On Tuesday, we had plans again with Mr and Mrs S. We walked to Folkestone to meet them for lunch at a vegetarian restaurant on Tontine Street. Tuesday was sunny, hazy and warm and it was the perfect day to explore. 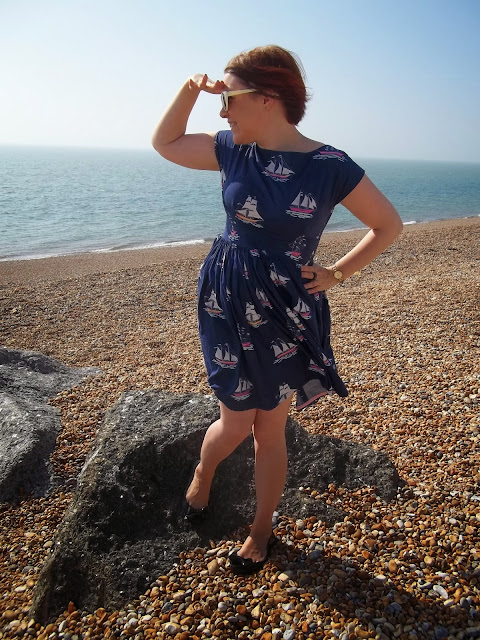 "Nope, I definitely can't see France today." - Fang Rock dress and those cute flat shoes again. They're plastic so I was even able to paddle in the sea with them on. On a pebbly beach that's useful. 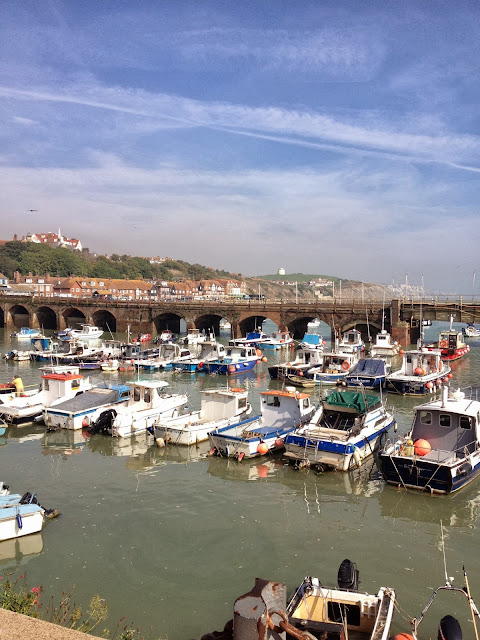 Folkestone Harbour - it's pretty, isn't it? Apparently there's a proposal to turn that old goods railway into a park, which would be awesome. Can you see the white cliffs on the horizon? 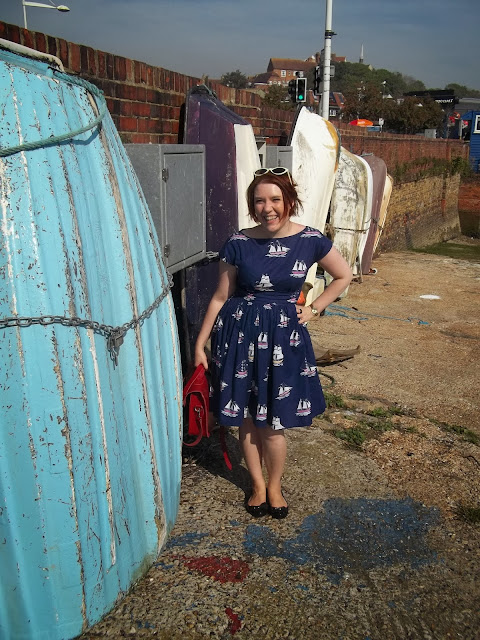 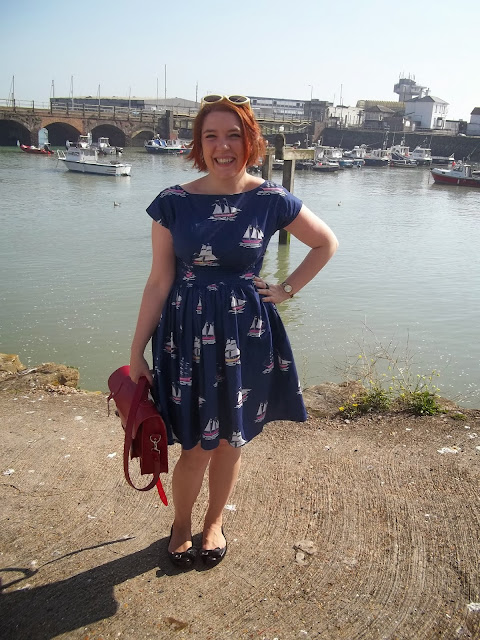 Here's me, mugging with some boats.

We had lunch in Beano's on Tontine Street, which I can't recommend highly enough. This part of Folkestone is becoming the Creative Quarter and is undergoing some exciting changes as well as being the heart of the creative industry in the town. 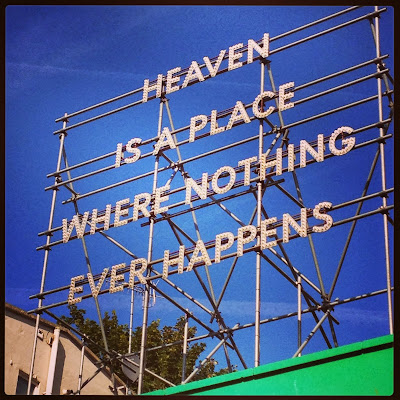 After lunch we bid farewell to our friends and set off exploring. We walked across the harbour and out towards The Warren. It was so peaceful and warm - it was heavenly! 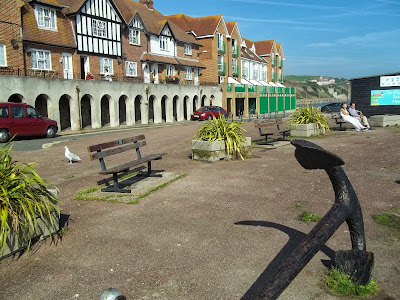 The Fish Market in Folkestone. Do you see what I mean about the gulls? That one is nearly as big as those parked cars. 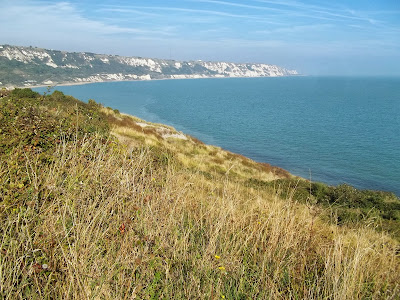 This is the view of the sea from above The Warren. On a clear day you really can see France from here, but it was too hazy last Tuesday. 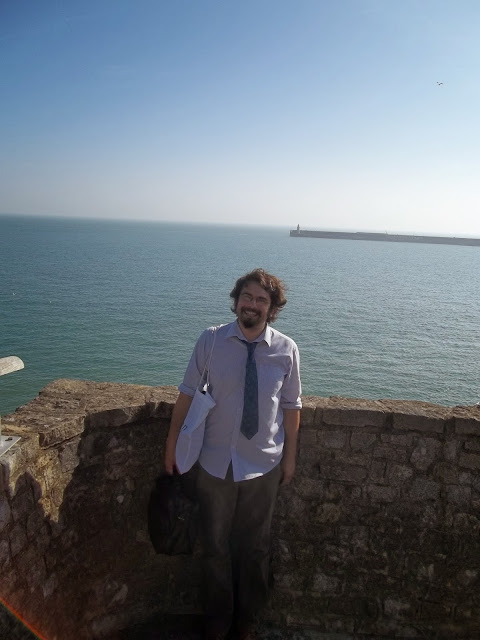 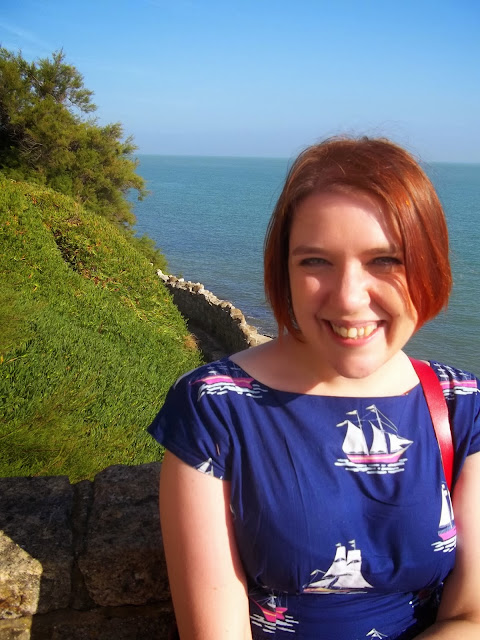 Sorry, not sorry for the millions of photos of me by the seaside.

After rambling across the top of The Warren as far as we dared, we headed back into Folkestone to meet Nic's brother for dinner. Nic did explore a little bit more closer to the sea, though, following some mysterious little steps down to find this: 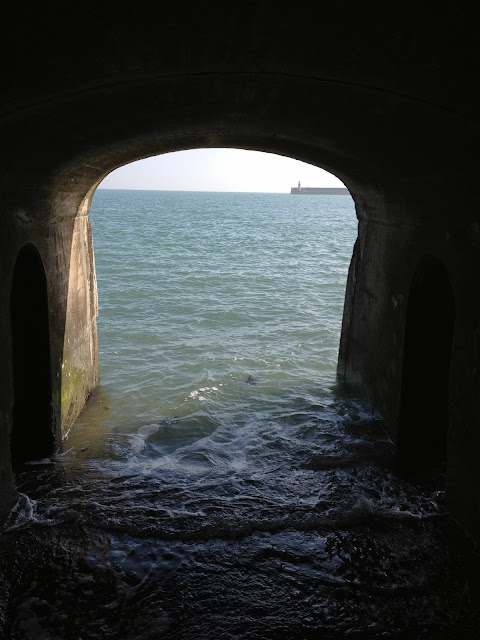 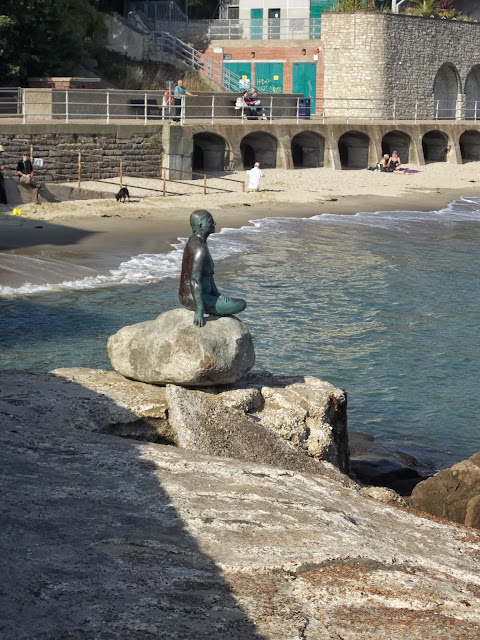 Wednesday was my birthday but I must confess to having been in horrible form. Both of us suffered from terrible insomnia on Tuesday night - neither of us slept for more than an hour - so I was a bit miserable. Still, when you're sad, the sound of the sea is very soothing. 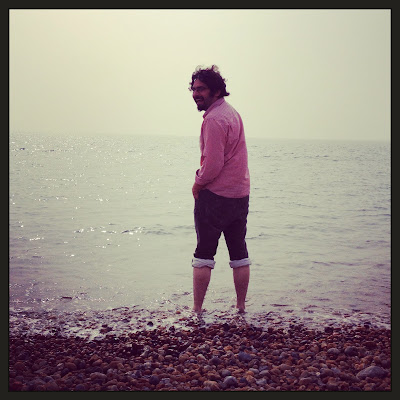 Of course, this lovely view was very cheering too.

My birthday was grand, though. Nic's family spoiled me with gifts and a special dinner and by bedtime I was feeling a lot better. And on Thursday, on our way back up through London, I celebrated myself by buying some ridiculous shoes (which I'll show you in a later post) and Nic treated us both to these: 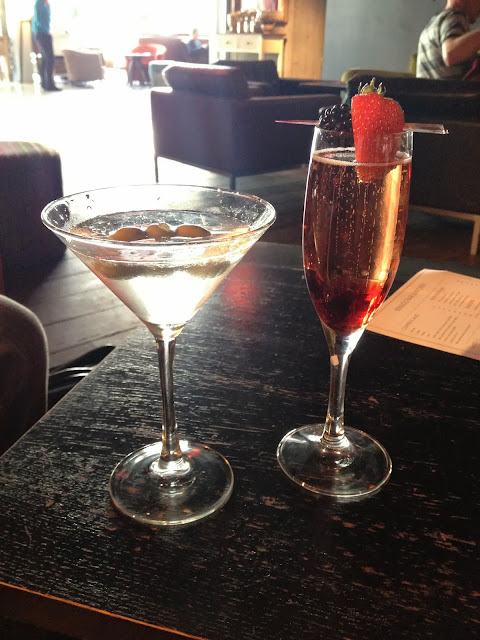 So, the moral of the story is that Folkestone is pretty cool. I'm very excited about getting married there next year. I'm also pretty excited about my imminent dinner, so I'm away to eat that. Night!
Posted by Roisin Muldoon